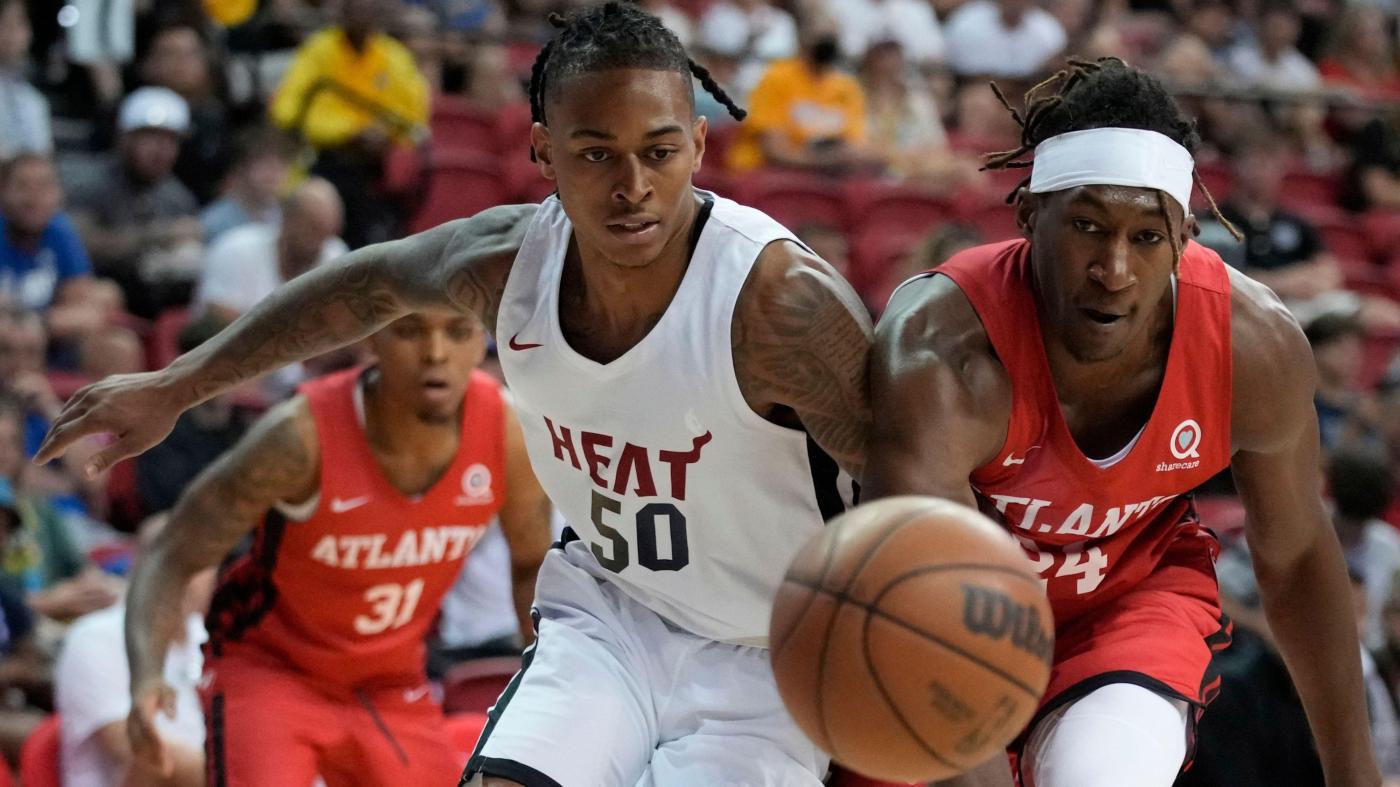 It started July 2 at Chase Center, home of the Golden State Warriors, with a 100-66 loss to the Los Angeles Lakers. It ended Saturday on the UNLV campus in Las Vegas with an 86-83 victory over the Los Angeles Clippers.

After eight games combined at the California Classic and then the NBA Las Vegas Summer League, the balls stop bouncing for the Miami Heat for the first time in 10 months.

Now the assessments can be made, two months ahead of training camp, for what will be the franchise’s 35th season.

In this case, what happened in San Francisco and Las Vegas won’t stay there, rather to be appraised back at 601 Biscayne, in the Heat’s executive, scouting and coaching suites.

1. Small sample size: When last seen in action, first-round pick Nikola Jovic was meandering through a scoreless 14-minute performance against the Boston Celtics a week ago in the Heat’s Vegas opener, a game he took only one shot.

During that victory, the 6-foot-11, 223-pound Serb suffered the quadriceps bruise that sidelined him since.

But one game before that performance there was a 25-point outing against the Warriors that included 5-of-7 3-point shooting and nine rebounds.

Time on the FTX Arena practice court could be crucial in these intervening weeks. But there also is Jovic’s selection to Serbia’s national team for World Cup qualifying and EuroBasket in the interim, with EuroBasket running through Sept. 18.

2. No sample size: Then there was the breakout star of last year’s summer league, Omer Yurtseven, who ultimately did not see any action despite more than a week with the team.

In the wake of a whirlwind that took him within days of the start of the Vegas summer league from Turkey to England to Turkey to Miami to Las Vegas, the 6-foot-11 center arrived with a quadriceps injury suffered in Turkey’s victory in World Cup qualifying on July 3.

The reality is the Heat already know plenty about Yurtseven, with it still to come down to whether coach Erik Spoelstra will be willing to pair him on the court with Bam Adebayo or even play him at backup center ahead of Dewayne Dedmon.

3. Feel-good story I: From the moment the Heat announced in January that Marcus Garrett was waived and would require wrist surgery, the Heat also made clear their intention to have Garrett rehab in South Florida and work out at FTX Arena.

Six months after that surgery, Garrett not only was back on the court with the team in Las Vegas but, a week later, the guard who went undrafted out of Kansas in 2021 was back to the two-way contract that the wrist injury derailed at midseason.

Garrett’s on-ball defense was as stifling as ever, with the development of his offensive game now to continue.

4. Feel-good story II: Undrafted guard Jamal Cain offered a taste of his athletic wing possibilities in the Heat’s summer opener against the Lakers … and the next day showed up in NBA health-and-safety protocols.

But after six days quarantined in a San Francisco hotel with COVID, the 6-foot-7 wing was back with the team in Vegas, again tantalizing with the form that had him as 2022 Horizon League co-Player of the Year.

The perseverance led to an Exhibit 10 contract and invitation to training camp.

He capped his time in Las Vegas with an 11-point, 11-rebound performance in Saturday night’s victory over the Clippers that featured a decisive late blocked shot.

5. He’s No. 1: The first Exhibit 10 extended to a member of the Heat summer roster went to undrafted Fresno State center Orlando Robinson.

Robinson proved his value in summer league with a pair of double-doubles in his final two Las Vegas appearances, with the question now of whether a lack of athleticism can be overcome in camp.

6. Ready, willing, able: After appearing in 19 games with the Heat during the regular season and eight more in the playoffs, Haywood Highsmith served as both contributor and mentor for the two weeks.

While the bulk of his 2022-23 contract won’t be guaranteed until opening night, Highsmith showed enough to at least put himself in the conversation for some of the playing time at power forward vacated by P.J. Tucker’s free-agency departure to the Philadelphia 76ers.

7. Vive la France: With the Heat lacking much in the way of playmaking, which at times left the summer roster rudderless, French League guard Kyle Allman Jr. stepped up with both his playmaking and scoring, arguably as the best offensive player on the summer roster, including his 26-point performance Saturday night against the Clippers.

But with a contract in France in place, the guard who went undrafted out of Cal-Fullerton in 2019 could find it financially more lucrative to return to Paris Basketball of the LNB Pro A league in France.

8. Two-way off ramp: Neither of the two-way players on the roster at the start of the summer made it to the finish line, with Mychal Mulder and Javonte Smart done in by shooting struggles and inability to contribute otherwise.

By extending their run through seven of the eight summer games, it precluded an extended look at other options.

Ultimately, the Heat’s two two-way slots were filled by Garrett and Darius Day, a forward poached from the San Antonio Spurs’ summer roster.

Veteran forward Udonis Haslem also was in Las Vegas, working with players at one practice and then taping Duncan Robinsin’s podcast.

10. Support system: The Heat reached beyond the coaching staff to fill out their summer bench, with Philippines coaching legend Tim Cone working with the team at the invitation of Spoelstra and Heat G League coach Kasib Powell also assisting summer-league coach Malik Allen.

In addition to Allen, other Spoelstra assistants working the bench during summer league were Anthony Carter and Caron Butler.