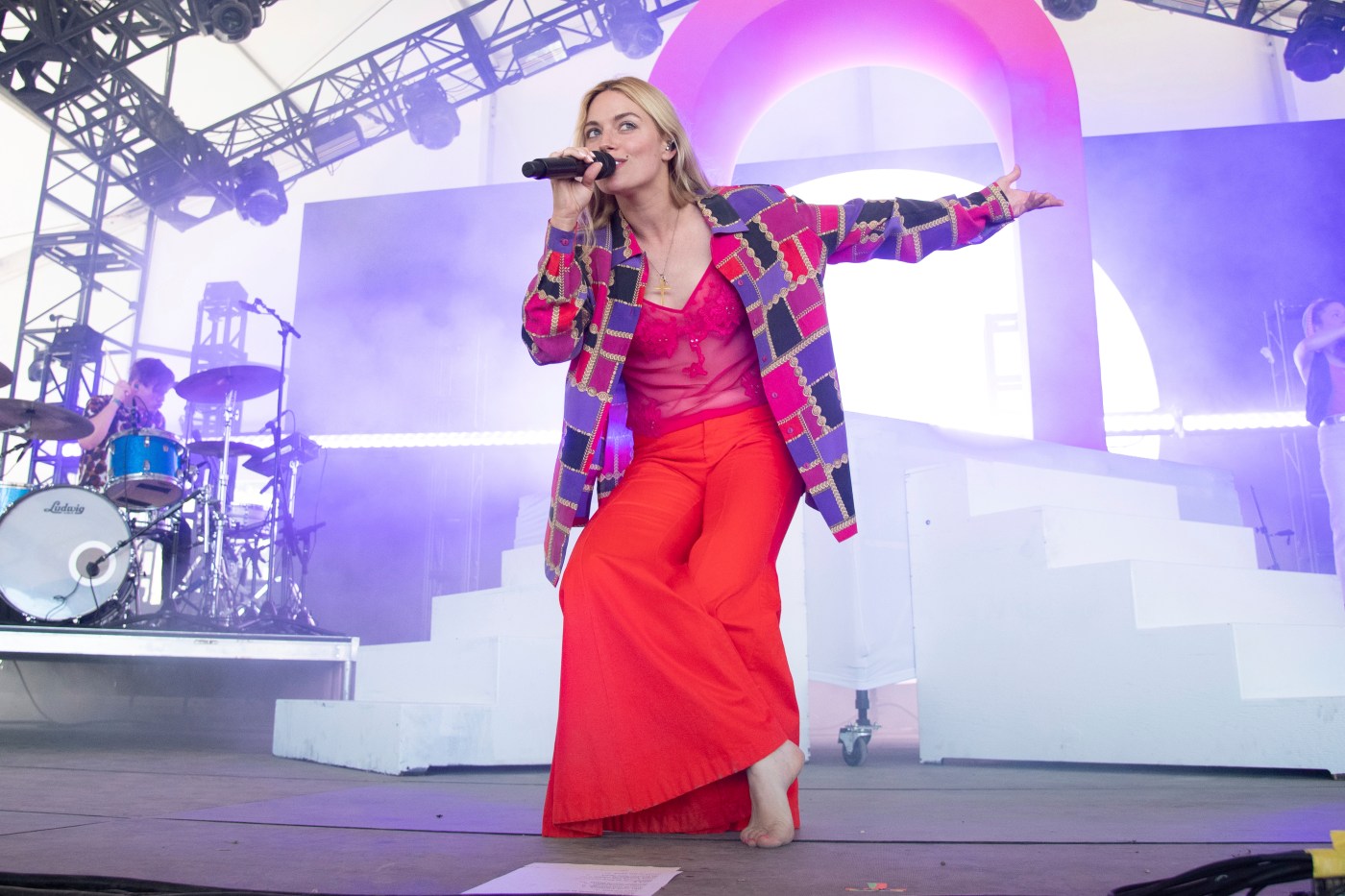 Following last year’s Halloween weekend episode, Outside Lands is moving back to its usual early August spot in 2022.

Attendees probably don’t need us to spend much time slinging the virtues of the bigger-name acts. After all, those artists are likely the main reasons why fans bought passes in the first place.

Yet, if you’re looking for recommendations on lesser-known acts performing at the festival, we are more than happy to oblige.

Here’s a look at a dozen must-see acts listed further down on the bill. You might not know all their names — at least not yet — but they are all worth your attention at the 2022 Outside Lands.

For more information and to purchase tickets, visit sfoutsidelands.com.

Ashe: We’ll kick off our picks on a local note and recommend that Day 1 attendees definitely make time to catch this San Jose native.

Ashe grew up on a mix of Christian music radio and classic rock, attended Berklee College of Music, and now ranks among the most compelling new pop artists in the business.

She is best known for the 2019 single “Moral of the Story,” which was co-written and co-produced by hit-maker Finneas O’Connell (Billie Eilish’s brother) and was used in 2020 Netflix film “To All the Boys: P.S. I Still Love You.”

The singer-songwriter’s debut full-length, “Ashlyn,” came out in 2021 and proved to be an amazing showcase for her vocal work. Her sophomore effort, “Rae,” is expected in October.

Cory Henry: The multitalented artist, who is nothing short of a marvel on the Hammond B-3 organ, was reportedly just  6 years old when he made his debut at Harlem’s legendary Apollo Theater.

He’d go on to perform with such jazz/R&B/rock acts as Bruce Springsteen, Boyz II Men and Kenny Garrett as well as with an assortment of gospel greats, including Yolanda Adams and Kirk Franklin.

Henry would also spend time as a member of the acclaimed jazz-fusion act Snarky Puppy — earning three Grammy wins along the way. He garnered more Grammy recognition as one of the co-producers of Kanye West’s “Donda,” which was nominated (but lost) for both album of the year and best rap album in 2022.

Best Coast: This was the first band that we singled out when we started making this list of can’t-miss acts for the 2022 Outside Lands.

Of course, Best Coast is far from being a hot new band and certainly doesn’t generate the type of buzz found with some of our other picks. Yet, no other act on the bill — including the any of the headliners — has put out better music over the past 13 years.

During that time frame, Best Coast has released four full-length studio albums — and each has been excellent.

So, those looking to immerse themselves in some gloriously sunny California indie-pop sounds — even if the famously unpredictable San Francisco weather might be offering up a completely different vibe — then definitely make plans for Best Coast.

Hiatus Kaiyote: The funky neo soul/jazz-pop outfit boosts a sizable following in its native Australia, where its last two albums — 2015’s “Choose Your Weapon” and 2021’s “Mood Valiant” — have both charted in the Top 25.

Now, the rest of world is catching on to vocalist-guitarist Nai Palm and her groovy band mates. Fans include some heavy hitters in the hip-hop world — including Chance the Rapper, Kendrick Lamar, the Carters (aka, Beyonce and Jay-Z) and Drake, who have all sampled Hiatus Kaiyote in their works.

KennyHoopla: The Cleveland native has stirred up a tremendous amount of excitement with the singles, EPs and one mixtape — “Survivors Guilt: The Mixtape” — he’s released over the last few years.

Spin through a handful of those offerings — starting with the single “Estella” that the vocalist released with pop-punk icon Travis Barker — and it’s pretty easy to see why people think KennyHoopla, born Kenneth La’ron, could be a dominant player in the alt-rock space for years to come.

That Barker collaboration hit No. 8 on the alt-rock charts, giving KennyHoopla his second top 10 offering — following “How Will I Rest in Peace if I’m Buried by a Highway?”

One of the Bay Area’s best rappers, June has been incredibly productive during his career.

Fortunately, the quality of these efforts tends to be just as impressive as the quantity.

June is a great wordsmith, with flow for days and an ear for great beats, and he certainly knows how to put it all together in the studio.

Zoe Wees: You won’t hear a better voice at the 2022 Outside Lands than the one belonging to this German singer-songwriter.

Wees is a major talent, with incredible vocal chops and the ability to sell a song with such high-flying emotion. Her 2020 debut single, “Control,” was an international smash, hitting No. 1 in France and breaking into the Top 40 in many other countries.

“Control” is one of those songs that stays with you long after you hear it, especially when the realization hits that the aching power ballad is propelled by the singer’s own anxiety over her struggle with epilepsy.

Robert Glasper: The Houston native is nothing short of the one of the most important, acclaimed and respected artists of the 21st century.

The phenomenal pianist — who is also an accomplished songwriter, producer, arranger and band leader — is best known for his work in the jazz realm but, really, his talents can hardly be contained by any one musical genre. Thus, it’s no surprise that he’s found success in hip-hop, neo-soul and R&B as well.

He’s been nominated for nine Grammys, winning four. The first “w” came for “Black Radio,” which earned the title of best R&B album at the 2013 Grammy Awards.

Griff: The British singer-songwriter, whose birth name is Sarah Faith Griffiths  joined some mighty impressive company when she was named the Rising Star at the 2021 Brit Awards. Past recipients include such notable talents as Jorja Smith, Sam Smith, Florence and the Machine, Ellie Goulding and, even, Adele.

Listen to Griff’s debut mixtape, last year’s “One Foot in Front of the Other,” and it’s plain to see why people are expecting such big things of her. The effort is filled with winning pop tracks that nicely frame Griff’s soulful vocals. Of particular note is the lead single, “Black Hole,” which ranks among the best broken-hearted love songs we’ve heard in recent years.

Wet Leg: Hailing from the Isle of Wright, this British indie-pop/rock duo — consisting of Rhian Teasdale and Hester Chambers — has been skyrocketing in popularity ever since the release of the debut single “Chaise Longue” in 2021.

The song quickly went viral, collecting more than 6 million views on YouTube, and propelled Wet Leg to appearances on “The Tonight Show with Jimmy Fallon,” “Later … with Jools Holland” and other programs.

The band quickly built on that early success with the release of its first full-length album, a 2022 eponymous effort that debuted at No. 1 on the U.K. and Australian album charts, and cracked the Top 20 in the U.S., Germany, New Zealand and other countries.

Briston Maroney: The young alt-rock hero came to fame with the release of “Freakin’ Out on the Interstate,” the surprise smash that has collected more than 135 million spins on Spotify alone.

Yet, that’s just one of a number of solid tunes this talented Tennessean has to offer.

Waltz through such winners as “Small Talk,” “The Kitchen” and “Bottom of the Ocean” and you’ll see why Maroney belongs on our list of must-see acts at Outside Lands.

The singer-songwriter-guitarist has released several EPs as well as one full-length outing, “Sunflower,” which hit shelves in April 2021.

Amber Mark: Having already begun courting a fan base with an EP, mini-album and a number of singles, the Tennessee R&B singer-songwriter finally released her full-length debut “Three Dimensions Deep” earlier this year.

Of course, the offering probably sounded pretty familiar to fans by the time it hit stores, given that no less than five singles off the album — “Worth It,” “Competition,” “Foreign Things,” “What It Is” and “Softly” — had previously been released.

Mark has also been heard on Montreal electro-funk act Chromeo’s fifth studio outing, “Head Over Heals,” which earned a nomination for best engineered album (non-classical) at the 2019 Grammy Awards.