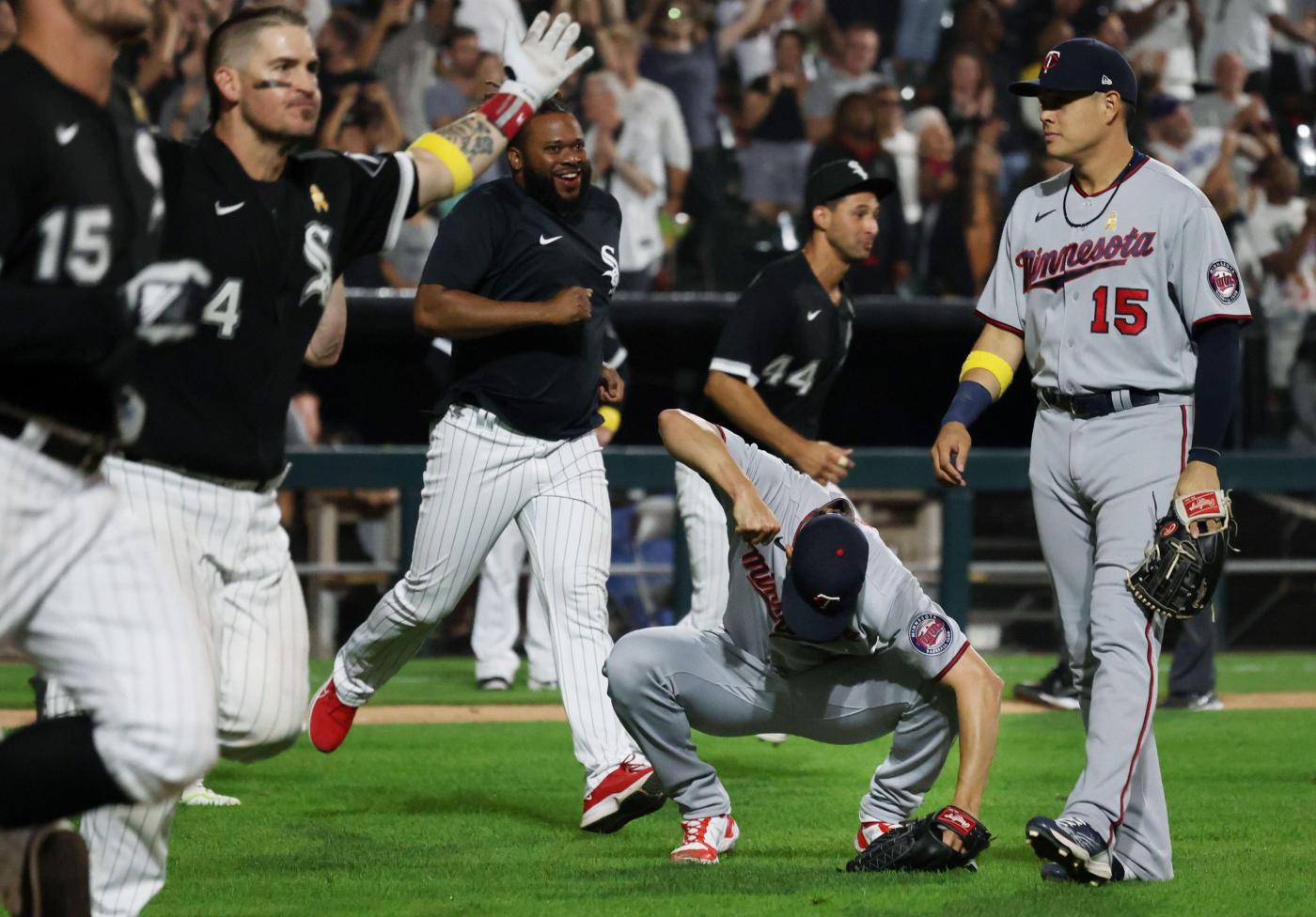 Romy Gonzalez made his way from third to the plate after umpire Clint Vondrak ruled Jorge López’s pitch hit José Abreu with the bases loaded in the ninth inning Friday.

But the game was not over. A video review overturned the initial call and changed it to a foul ball.

Consider the first celebration a practice run. Two pitches later, the Twins got a force at second but couldn’t turn the double play on an Abreu grounder, and Gonzalez scored to give the Sox a 4-3 victory in front of 24,818.

“Two walk-offs, that was definitely the weirdest ending I’ve ever seen to a game,” Sox first baseman Andrew Vaughn said. “It was good. Got a win.”

The ninth had a little bit of everything. The benches cleared, Sox acting manager Miguel Cairo was ejected and there were the two celebrations, complete with fireworks both times.

“We are in charge of positive energy,” Abreu said through an interpreter. “It’s a very good moment for us. Everybody is trying to do their best, and we have to credit everybody on this team. Everybody is doing their part, and that’s what we are supposed to do here.”

With the win, the third-place Sox returned to .500 at 66-66 and gained ground in the American League Central standings. They trail the second-place Twins by two games and the first-place Cleveland Guardians by three.

The Sox rallied twice to take the opener of the important series.

They trailed by a run in the eighth when Yasmani Grandal hit a solo homer to left to tie the game at 3. Grandal was 2-for-4 with two RBIs.

Gonzalez singled with one out in the ninth and advanced to second on an Elvis Andrus single.

Vaughn got hit by a pitch and the benches cleared.

“I was just really mad,” Vaughn said. “I’ve been hit up high a few times. Got hit in the face a couple of weeks ago. Spur of the moment, I was mad, I was upset.

“I know he’s not trying to do it on purpose. No pitcher is trying to load the bases with an MVP coming up next. I was just mad. I put my head down after I said ‘that was at my head, that ain’t right.’ Then just went to first base. And then everybody was on the field.”

Added Cairo: “What I saw was him saying something, their pitcher López saying something to (Vaughn). He was just talking. (Vaughn) didn’t do nothing. So I went over there just to protect my player.”

Cairo said he was told he “was not supposed to argue warnings,” which led to his ejections.

After the field was cleared, Abreu stepped up with the bases loaded. He appeared to get plunked too. But the review changed that call, so Abreu went back to work.

Abreu did just that, hitting a grounder that appeared to be deflected by López and slowed on the way to Nick Gordon. The second baseman flipped the ball to shortstop Carlos Correa. But there was no play at first — Abreu made it safely and Gonzalez scored to give the Sox their third straight win.

“We are living in a moment of unity here,” Abreu said. “We are united. We are working toward the same goal and it’s winning as many games as we can, trying to stay together. And this is important for us. It was a good game for both teams. But we are just trying to do our best because we know what we can do for (manager) Tony (La Russa).”

La Russa missed his fourth straight game at the direction of his doctors and is out indefinitely. He went to Arizona to undergo additional testing by his personal physicians, the team announced Wednesday.

“It’s a difficult moment for us as family,” Abreu said. “He’s part of this family. We’ll try to do the best for him too.”