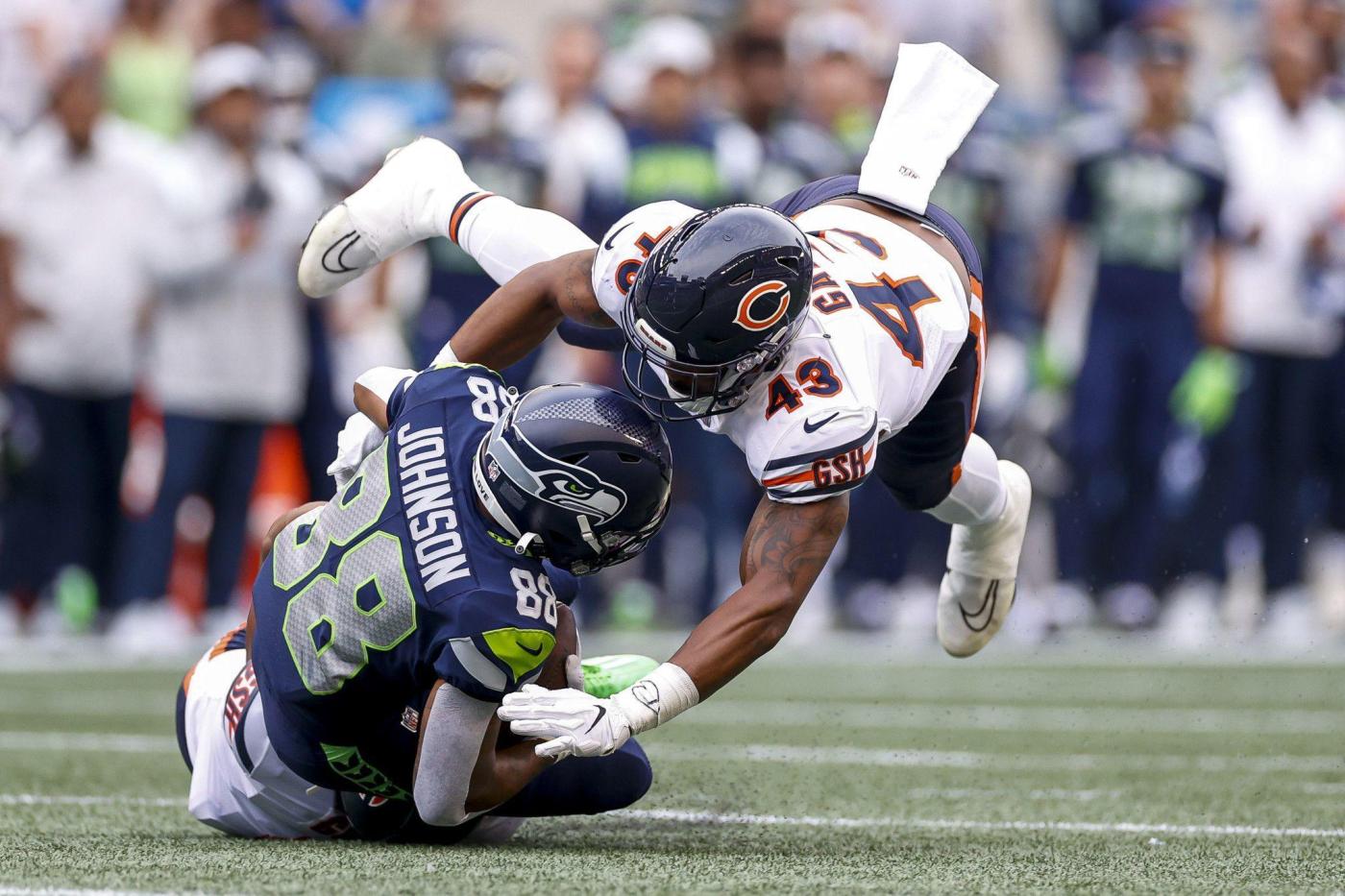 The Chicago Bears held their final practice of training camp Sunday morning at Halas Hall with a large group of military members and first responders in attendance.

Quarterback Justin Fields had two big connections with wide receiver Equanimeous St. Brown, finding him in the corner of the end zone for a touchdown in a red-zone drill and then hitting him for a 23-yard gain along the sideline, allowing St. Brown to get out of bounds and stop the clock in a two-minute drill.

1. Defensive coordinator Alan Williams said his mind isn’t made up on a pecking order at cornerback.

Rookie Kyler Gordon returned to practice last week after missing a good chunk of the preseason, and the second-round pick played Thursday as the nickel back against the Seattle Seahawks. Gordon worked on the outside as well Sunday and clearly is in the mix to start alongside Jaylon Johnson.

Injuries have created a lot of moving parts this summer. Thomas Graham Jr. has been sidelined since the first day of camp with a hamstring injury. Veteran Tavon Young has been out nearly as long, although coach Matt Eberflus has yet to say anything about his absence. Both were considered possible options for the nickel role.

In their absence, undrafted rookie Jaylon Jones — who was injured against the Seahawks — has received extended looks at nickel. Similarly, depth issues have provided Lamar Jackson with a lot of time with the starters on the outside, although Kindle Vildor is back in the mix now.

Having to juggle so many players has given the coaching staff extended looks at players they didn’t know as much about.

“I’m still not sure yet,” Williams said when asked which cornerbacks have earned his trust. “In your mind, I think I know where you’re going. You say, ‘Well, is that Jaylon Johnson? Has he earned it?’ None of our guys have played an entire ballgame. Until you play an entire ballgame in a system, you’re looking for, ‘Can a guy play 60 or 70 reps and be consistent?’

“Because on defense you can have a knockout ballgame for three quarters and then, as you saw the other night, it can go like that in a flash and the offense can score two touchdowns, three touchdowns and it’s a wrap. Right now, we’re still looking, we’ll see who can get there and earn the trust.

“I know our guys are working. I don’t want to make it seem like they are not working. … I always say it’s a bank account. Can you fill up that bank account with the trust in how you play and be consistent? And then we’ll go from there.”

Jenkins continues to get starter reps at right guard.

“I love Tev,” Montgomery said. “He’s nasty. He’s got controlled chaos. You can see it when he’s playing, so it’s definitely a really good thing to see, especially from the guys up front that are going to help you run the ball.

“When he’s off the field, he’s super nice. His glasses are never foggy. He talks with proper pronouns. He’s just a super intelligent guy. But when he’s on the field, it’s like he’s still super intelligent, but he’s kind of like — yeah, he’s not like that. You can definitely tell it’s a screw loose when you can go from super nice to being not super nice.”

Veteran Michael Schofield worked in briefly with the starters Sunday, but Jenkins got the bulk of the reps with the first team.

Newsome had plenty of separation from the defensive back covering him and was running free downfield when he dropped the pass from the Bears backup quarterback. The second-year receiver can’t miss opportunities like that while battling for a roster spot with the new regime.

Veteran Riley Reiff continued to work with the second unit at left tackle.

The Bears must reduce their roster from 85 to 80 players by 3 p.m. Tuesday.