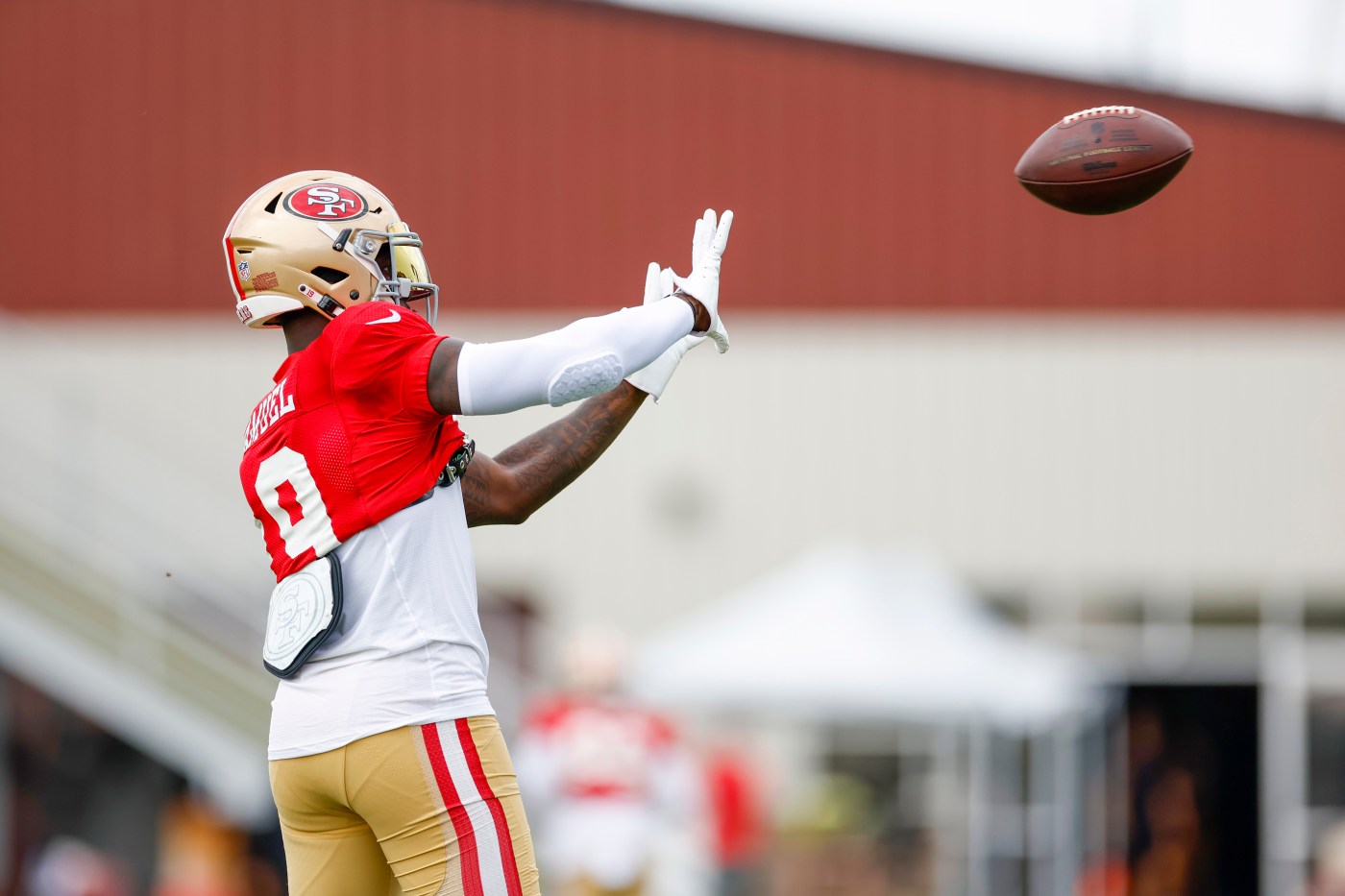 SANTA CLARA — Whatever level of discontent that existed between Deebo Samuel and the 49ers was rendered moot the moment the star receiver signed a three-year contract extension worth $73.5 million.

Samuel, who talked to the media for the first time Tuesday following practice after a deal that guarantees him $58.1 million, had no intention of airing any dirty laundry.

If any ever existed.

Once pen goes to paper, it’s all hearts and flowers. Wearing a T-shirt featuring Brandon Aiyuk, Samuel made it sound as if he couldn’t conceive of playing anywhere else.

“Besides the money, I just love the game,” Samuel said. “I love being out here, this team, this coaching staff and with what we have as an organization.”

That’s the way it works when it comes to contract negotiation and one side attempting to leverage the other.

“At the end of the day, this is a business,” Samuel said. “What changed was the communication. The more we communicated, the more we figured things out.”

Samuel never went on record saying he wanted to be traded, although it was reported he did by both NFL Media and ESPN.  He never denied it either. Asked directly if he regrets requesting a trade, Samuel said, “This is a business and we came to a decision and I’m here and I’m happy to be here and it is what it is.”

While Samuel dodged talk of the trade demand, he was eager to clear up another report that indicated he was unhappy with the dual role of wide receiver and running back created by coach Kyle Shanahan that helped the 49ers reach the NFC Championship Game.

“That’s false. You can turn on the tape, go back to the Cowboys (playoff) game,” Samuel said. “It shows what kind of player I am. Also, you can go back, turn on the Pro Bowl tape and what I said about being a wide back. I’m doing whatever it takes to help this team win.”

Follow the money and it’s not difficult to determine what happened between Samuel and the 49ers. It was a matter of Samuel sliding into the pecking order that started with Tyreek Hill (Miami) and DaVante Adams (Las Vegas) and also included new deals for Cooper Kupp (L.A. Rams), Stefon Diggs (Buffalo), A.J. Brown (Philadelphia, D.K. Metcalf (Seattle) and Terry McLaurin (Washington).

With all those deals completed, there were some anxious moments for Samuel when he began training camp as a spectator.

“We gon’ ride for all our players.”

“You’ve got to be patient. Be patient, communicate,” Samuel said. “Not everything is going to happen as you want it to at first. It was probably one of the most stressful weeks I’ve been a part of in my life.”

Besides family and his representation, Samuel said he leaned on “big brother” Trent Williams, the 49ers All-Pro left tackle.

“He just told me to stay level-headed and everything is going to work out,” Samuel said. “I spent like a week with Trent, just chilling, hanging out, keeping my mind on things. That kind of helped me a lot.”

Samuel said quarterback Trey Lance was checking in as well, but the most important relationship is with Shanahan. It began when the 49ers staff was coaching at the Senior Bowl before the 2019 draft.

“I can’t even explain our relationship. It’s crazy,” Samuel said. “There’s not a day when I don’t go in and talk to him, or when he’s in the offseason in San Diego at his beach house or whatever. He’ll FaceTime me on the water. It’s just the kind of relationship I have with him outside. It’s not necessarily about football. It’s about life.”

Samuel is making up for lost time with Lance, given the two did not have OTAs and the mandatory minicamp to work out together. While it’s been rough going for Lance for the most part, the second-year quarterback did whistle a strike over the middle that Samuel caught in stride and had the crowd buzzing.

“He’s getting smarter by the day. I don’t think he actually realizes that we have the best defense in the league and it’s going to be hard to complete the ball,” Samuel said. “Nothing is going to be on time right now.”