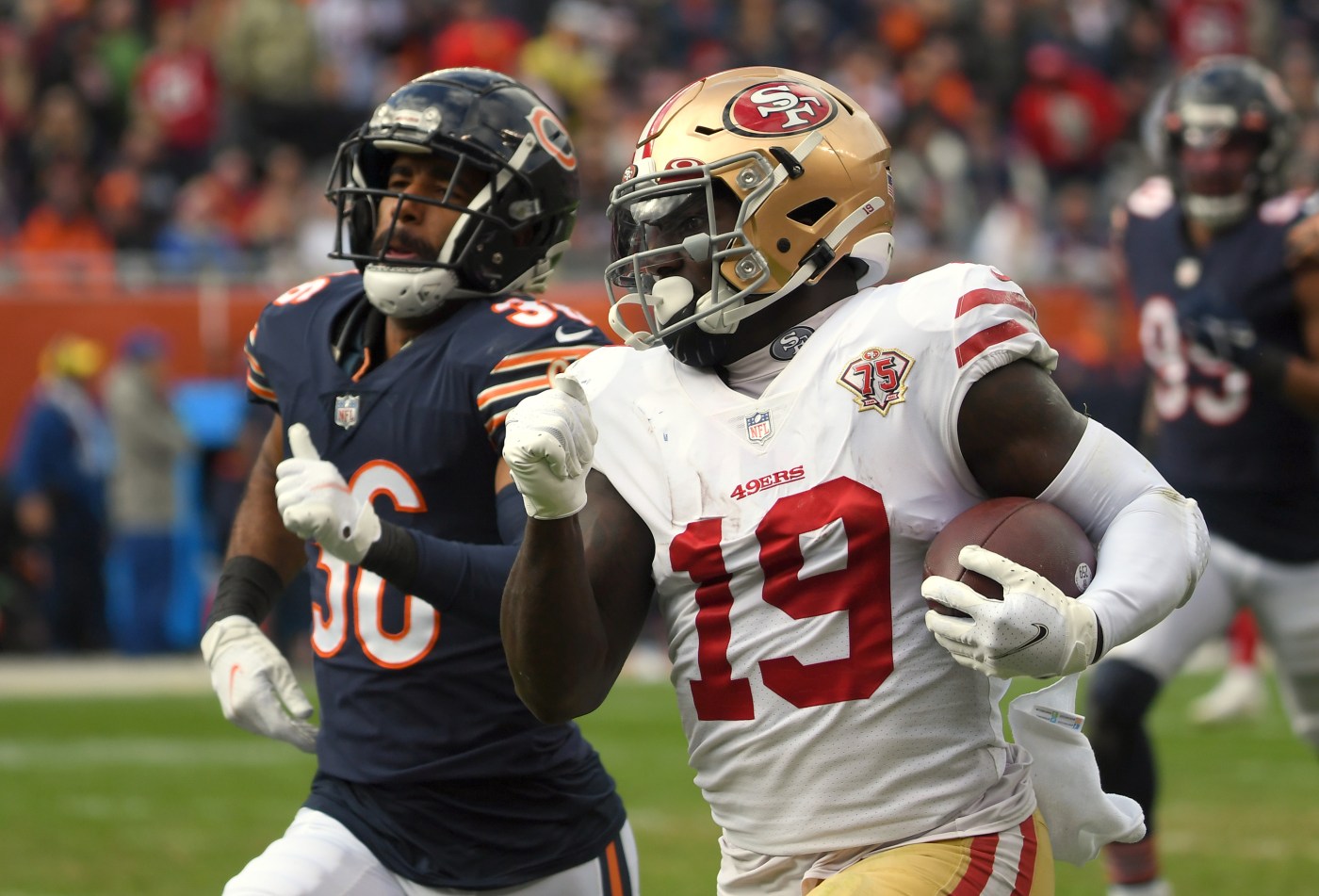 SANTA CLARA — Deebo Samuel sat at his locker, scanned the room full of his 49ers’ teammates and admired the view.

“This team is as good as we want it to be, meaning, everybody is firing on all cylinders, everybody is where they need to be,” Samuel said Monday, after returning to practice from an Aug.25 knee bruise and declaring himself 100-percent healthy.

The 49ers, who open up Sunday at the Chicago Bears, also have a quarterback combination that rocked the NFL world a week ago, when Jimmy Garoppolo agreed to take a pay cut and stay as the backup to Trey Lance.

That news apparently did not throw the 49ers off course, not internally, not after head coach Kyle Shanahan apprised veteran leaders at each position group of Garoppolo’s sudden return.

“Kyle does a good job of communicating with the players, so we kind of knew. It didn’t catch anybody by surprise,” Samuel said. “We were all on board. That’s what it’s going to be.”

In Lance’s last meaningful game — he made two cameos this preseason — he threw a 45-yard touchdown pass to Samuel in a home-finale win over Houston.

“He’s prepared. Kyle does a good job with the game plan, meeting with him,” Samuel said. “We’ll bring him along, being the vets in the huddle for him – Trent (Williams), Juice (Kyle Juszczyk), B.A. (Brandon Aiyuk), (George) Kittle. You’ve got guys around him that will build his confidence, even if he gets in a slump.”

The 49ers were in a big-time slump last season when they visited the Bears on Halloween. Trailing 16-9 and staring at a fifth-straight loss, Samuel came to the rescue. He caught a short pass from Garoppolo and, behind a caravan of blockers, raced 83 yards before getting pushed out at the 1-yard line. Garoppolo then produced the first of his two touchdown runs in that 33-22 win.

“I should have scored. I was dead tired,” Samuel recalled.

That ranked among his top plays in his All-Pro season, topped perhaps only by his 9-yard, last-minute run on third-and-8 to set up the 49ers’ playoff win at Green Bay.

The 83-yard, catch-and-run in Chicago was the NFL’s third-longest play last season. It defined Samuel’s hard-charging style that saw him total 772 yards after the catch (among 77 receptions for 1,405 receiving yards). That’s not all it did.

“It showed how we went into the rest of the season, with that physical style of football,” Aiyuk recalled. “It was definitely a big play.”

That play has resurfaced this week amid hype of the 49ers’ return to Chicago.

MORE ON THE QB MOVE

“The core nucleus of the guys we have here and the culture we’ve established over the last five or six years with Kyle and John (Lynch), our locker room is in a position where we can handle things like this, and it doesn’t derail our focus or our enthusiasm,” McGlinchey said. “Because of that, it’s seamless and everybody is excited about it, excited to keep our friend in the building, and also help a guy who’s immensely talented win games.”

After team brass made sure the Garoppolo-Lance reunion tour was alright with them first, Shanahan listed to what the rest of the team had to say.

“There were definitely some questions asked,” McGlinchey said. “At the end it was more of: ‘Hey, I’m the head coach and this is what we’ve decided to do. We feel it’s best for the football team. Because of the people they are and what we have here, it’s not an issue, so let’s go play ball.’ ”

Brunskill hasn’t practiced since the Aug. 12 preseason opener, and that has prompted the 49ers to audition centers behind projected starter Jake Brendel. Among the candidates are newcomer Blake Hance, rookie Nick Zakelj and the practice squad’s Keaton Sutherland.

Offensive lineman Blake Hance called it a stressful 24 hours before the 49ers claimed him off waivers last week from the Browns.

“Obviously this team has had a lot of success and very high expectations again, this year, so that’s always a place you want to be,” Hance said. “It was a stressful 24 hours waiting for the waiver claims to come through. I wouldn’t want to be anywhere else. It’s a great situation and great organization.”

Hance has experience playing all five spots on the line, and the 49ers initially see him as an interior option. At his locker Monday, he spoke with Williams, the All-Pro left tackle whose film is something the Browns watched with admiration as their scheme uses similar, wide-zone rushing concepts. Said Hance: “Now I’m playing with him, trying to soak up all the knowledge he’s got, and it’s pretty cool.”

Signed to the 16-man practice squad were linebacker Buddy Johnson and offensive lineman Leroy Watson, the latter of whom was recently cut by the Atlanta Falcons and has an interesting tale about his culinary ambitions. Johnson was a 2021 fourth-round draft pick by the Pittsburgh Steelers and appeared in four games.