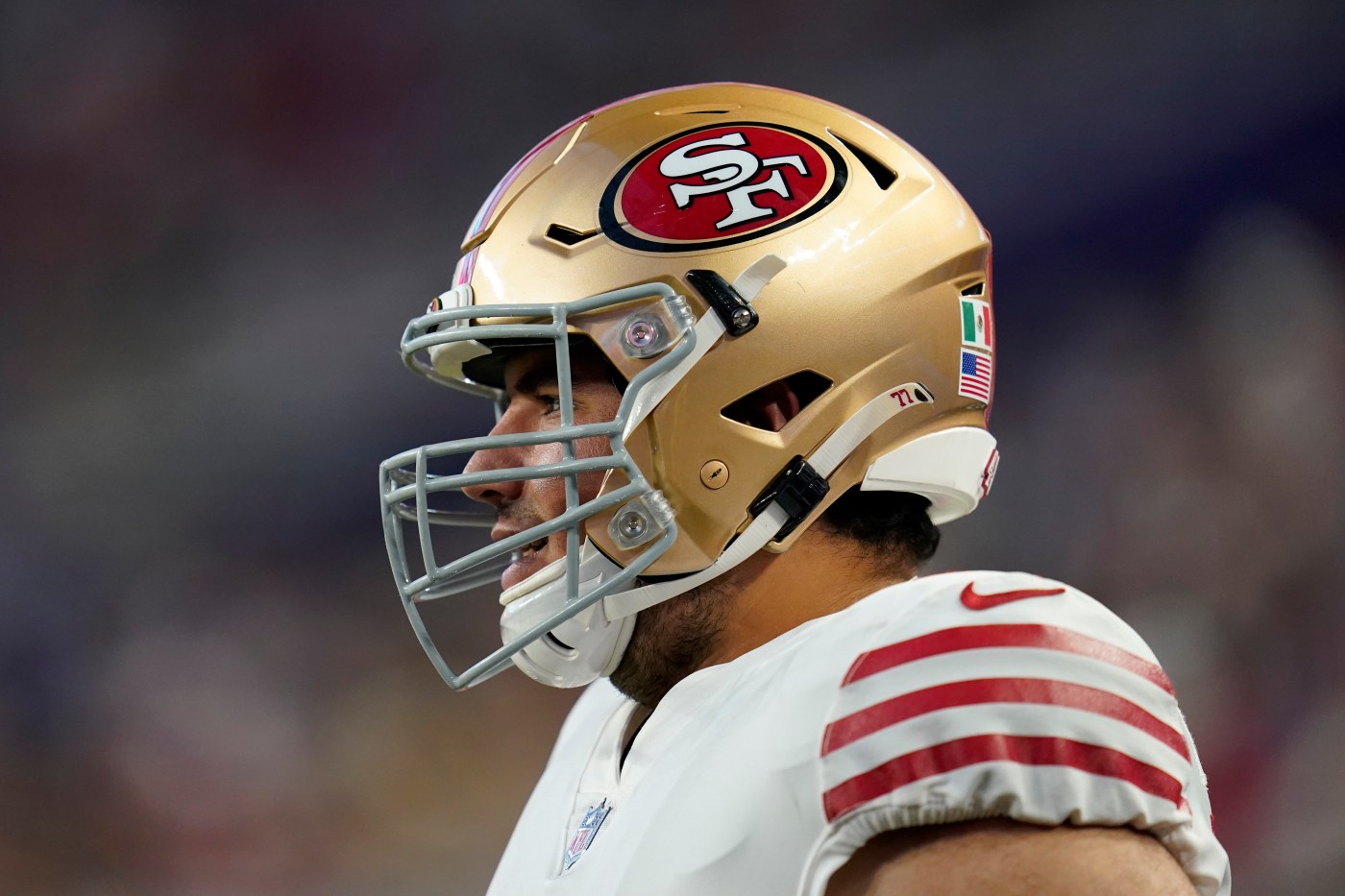 MINNEAPOLIS — Alfredo Gutiérrez crooned “I love the feeling, I love it, man” as he walked off a NFL field Saturday for the first time in a game-used 49ers jersey.

Once inside the 49ers’ victorious locker room, Gutiérrez received the ceremonial game ball from coach Kyle Shanahan, a poignant gesture to celebrate a debut that was a long-time coming. Gutierrez, a native of Tijuana, Mexico, joined the 49ers last year through the NFL’s International Player Pathway program.

“I almost said it in Spanish. I almost forgot English for a second. I was pretty nervous, shaking a little bit.”

That is similar to how he felt before entering the 17-7 preseason affair against the host Minnesota Vikings. He lined up at left tackle for the final four offensive snaps.

“Guys were pumped up,” Shanahan said. “It was his first time playing so we wanted to give him (the game ball). He’s been great having him around here. He’s everyone’s best friend on the team and helps us out throughout the week, too.”

“They said to stay ready, like every game,” Gutierrez added. “But they told me at the end I was going to go in. So, you know, butterflies in the stomach, started getting happy, my mouth started getting dry, but, finally, yeah, I got in.”

Gutierrez did not play last preseason and spent all year on the practice squad, where he’s assured a spot this season. The 6-foot-9, raw project played football his last two years at Montgomery High School in San Diego before returning to Mexico and winning a college football championship there, at Monterrey Tech.

Has he improved at the bottom of a depth chart topped by All-Pro Trent Williams?

As for Shanahan’s line about Gutierrez being “everyone’s best friend,” multiple players endorsed it, including defensive linemen who oppose him in practice but endear him off the field.

“When I had a problem a few weeks ago, he was right there by my side, making sure I was cool and everything like that. Man, big ups to him for getting some actual playing time.”

Jackson, by virtue of his rookie status, said he’s routinely practiced against Gutierrez in drills and can see his progress. As for Gutierrez’s debut, Jackson added: “That’s a beautiful scene right there. I was so happy when I saw him go out there (Saturday).”

Gutierrez can thank rookie safety Tayler Hawkins for getting him into the offensive huddle. Hawkins made an interception at the 49ers’ 4-yard line with 2:31 remaining.

“That’s why I was pumped to get that ball back. I thought we were going to have to kneel it,” Shanahan said.

Instead, rookie Jordan Mason ran 6 yards around the right edge (and away from Gutierrez’s side), but then came a bounce play and Mason took Brock Purdy’s toss then fellowed Gutierrez’s lead for a 10-yard gain.

“Finally, man. It took one year,” Gutierrez said as he walked off the U.S. Bank Stadium field. “Pretty cool, man. Pretty cool. I love the feeling. I love it, man.”