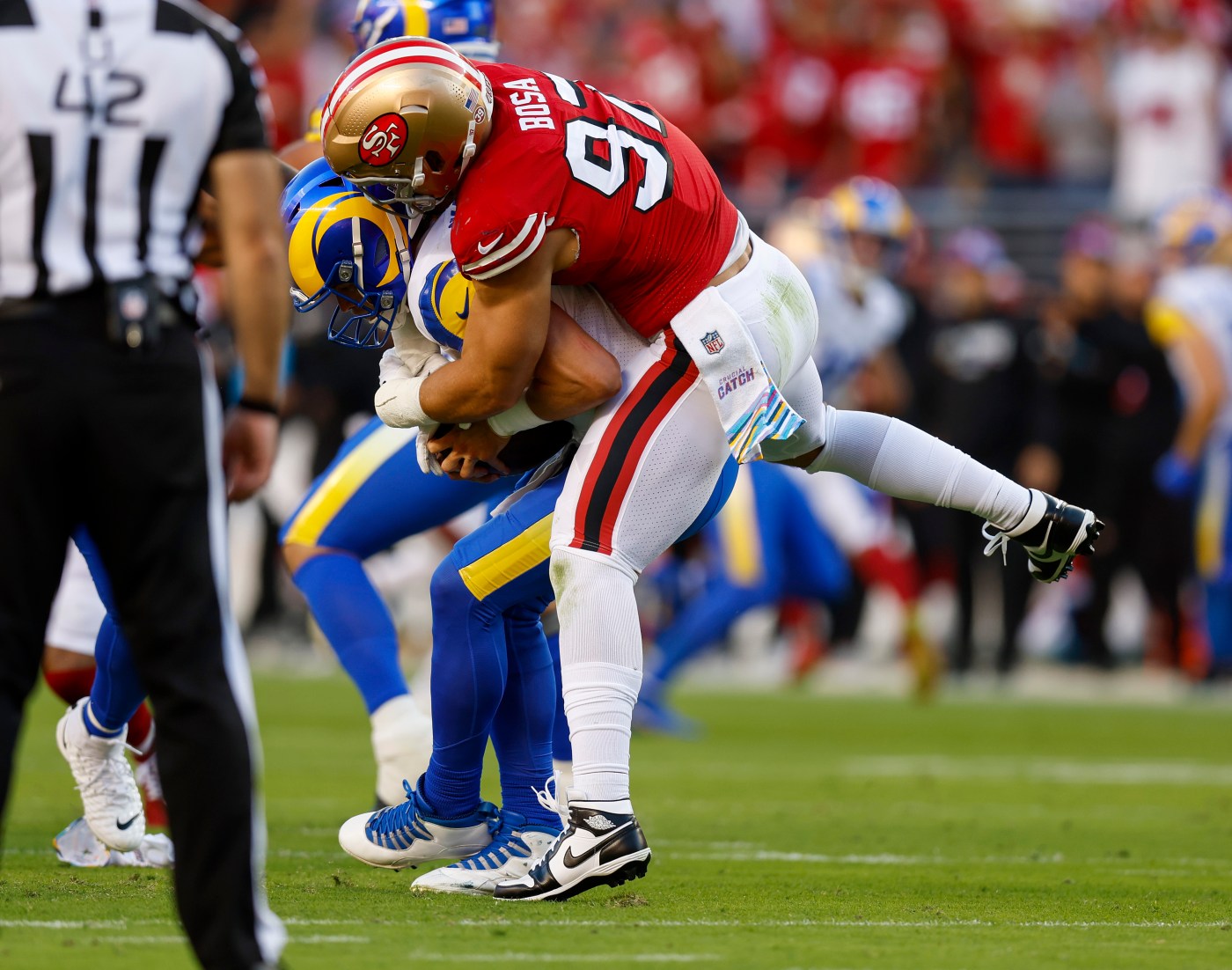 SANTA CLARA — Nick Bosa rarely whines about holding penalties that don’t get called against guilty linemen. For years, the 49ers’ fan base, coaches and teammates griped plenty on his behalf, especially after the 2019 team’s Super Bowl loss.

So why did Bosa pipe up “only one time” about a non-call in Monday night’s win over the Los Angeles Rams?

Well, any one play can reflect Bosa’s focus and importance to the NFL’s No. 1-ranked defense, as not only the league’s sack leader with six, but a resilient run stuffer.

“It seems like he just doesn’t get tired at all,” cornerback Emmanuel Moseley said.

“Nick’s an all-around player and never really takes a down off,” coach Kyle Shanahan said.

Hence, Bosa wasn’t going to let one non-call slide when it came to beating the Rams 24-9 and leveling everyone’s record at 2-2.

On the earlier play in question, Bosa noted that the official was looking down field instead appropriately at the trenches, and Bosa believes the official didn’t correctly hear his appeal for justice, which he said went like this:

Official: “He can do that.”

That response, Bosa said Wednesday, indicated the official “must not have heard me.” Plus, Bosa noted that the Rams are a rival that “gets away with a lot” of holding.

The next day, Shanahan said he “couldn’t agree more” with the notion Bosa is getting held more this season, and that the 49ers file weekly complaints with league officials.

Bosa was quick to throw a bone at them Wednesday: “The refs haven’t been too bad this year.”

Next up are the Carolina Panthers, who’ve drawn seven holding penalties in their 1-3 start while protecting Baker Mayfield, a quarterback who’s drawn Bosa’s ire since their Oklahoma-Ohio State days. Three years ago, in Bosa’s fifth NFL game, he sacked Mayfield twice in a rout over the Cleveland Browns, and Bosa celebrated by planting an imaginary flag in the turf, to mirror what Mayfield once did on Ohio State’s turf.

Asked if he’s kept in touch with Mayfield since their October 2019 matchup, Bosa said in deadpan fashion: “I don’t think we’ve ever been in touch.”

Mayfield got traded to the Panthers three months ago for a 2024 conditional fifth-round pick. He ranks 31st in completion percentage (54.7) and 30th in passer rating (75.0), with four touchdown passes, three interceptions and 11 sacks in Carolina’s 1-3 start.

Wednesday, Bosa got practice off to rest for the first time this season. He’s played 77 percent of the defensive snaps. But he is not a one-man show. He’s praised the “elite” players at all levels of the defense, which could be without starting defensive tackles Javon Kinlaw (knee) and Arik Armstead (foot) this week.

“I’d love to have Arik and Javon, but whoever’s in there is pretty darn good,” Bosa said. That was evident Monday night as not only did he have two sacks but so did Samson Ebukam, while one sack apiece came from Hassan Ridgeway, Charles Omenihu and nickel back Deommodore Lenior.

Safety Jimmie Ward (hamstring) and cornerback Jason Verrett (knee) made their season debuts at practice, and while both could play Sunday, the 49ers have three weeks to activate them off injury lists.

Ward, who got hurt in mid-August, is not adamantly seeking to reclaim his starting role, which veteran Tashaun Gipson Sr. impressively has filled while working alongside breakout star Talanoa Hufanga.

“Huf’s been lights out, and Gip, too. I’ve got to give him flowers, too,” Ward said. “Hopefully they get me in the rotation but I trust the coaching staff and I’ll be on the sideline looking pretty. They can keep me clean until they need me.”

The NFC’s offensive award, rather than go to Deebo Samuel for his 57-yard touchdown, instead went to Seattle Seahawks quarterback Geno Smith for his actions against the Detroit Lions’ 32nd-ranked scoring defense.

On Deebo Samuel’s 57-yard touchdown Monday, 52 yards came after the catch, and, according to Zebra Technology’s tracking data, he actually covered 79.7 on the ground that play, the most of any receiver in Week 4. His yards-after-catch proliferation has him at plus-699 yards over expected results, and he’s the only player plus-500.