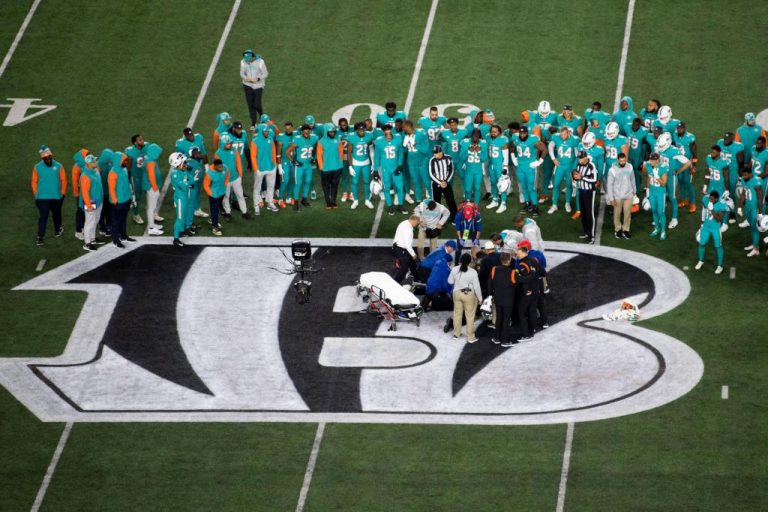 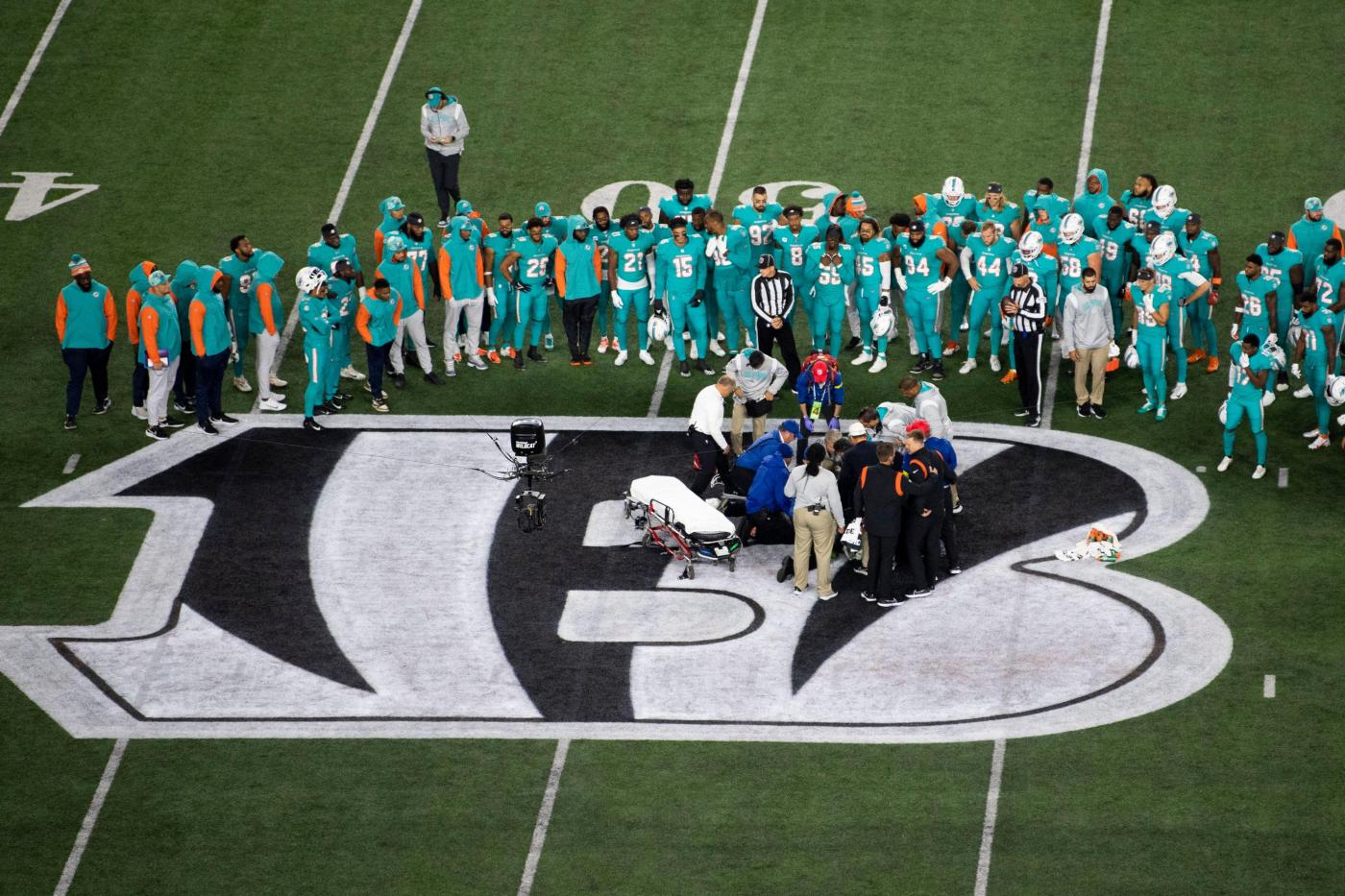 SANTA CLARA — Quarterback Jimmy Garoppolo called it a “scary situation” to see Miami Dolphins counterpart Tua Tagovailoa go down Thursday night with what appeared to be his second concussion in five days.

“With the protocol, you just have to trust the process, trust that everyone is doing their job the correct way, and let things fall where they may,” said Garoppolo, noting he’s thankful to have avoided a concussion in his injury-laden 49ers tenure.

Tight end George Kittle, who’s cleared sideline concussion tests in his career, put the onus on teams to save players from their inert desire to play through injuries, as serious as brain trauma is.

“It’s on the team to really protect these guys. Last night is a scary example of when a guy is not protected,” Kittle said Friday at his locker. “I’m not saying the Dolphins did anything wrong. Tua could have passed all these tests, and maybe his concussion last week wasn’t so bad; I don’t know all the details.

“With all the scrutiny that’s on it right now, I’m going to assume things are going to get even tighter moving forward,” Kittle added.

Cleared by independent neurologists (per NFL rules) to return despite a hit that wobbled him last Sunday against the Buffalo Bills, Tagovailoa’s scary situation Thursday night saw his fingers freeze and he lay on Cincinnati’s field in the first half of an eventual loss to the Bengals.

“It was not a good look for our league,” 49ers general manager John Lynch said Friday morning on KNBR 680-AM.

Lynch endured multiple concussions as a hard-hitting safety en route to the Pro Football Hall of Fame, but the sight of a concussed player remains “a hard thing to take, kind of makes you queasy in your stomach.”

DeMeco Ryans, the 49ers’ defensive coordinator and a former star linebacker, concurred that it was tough to watch Tagovailoa go down again Thursday night.

“Our game is nothing without players,” Ryans added. “And players’ health and safety is of the utmost importance. We’re hoping Tua is OK and we’re trusting those protocols are good.”

Former 49ers offensive lineman Randy Cross expressed his dismay via a Friday morning Tweet: “Tua was clearly concussed (the previous) Sunday and had zero business being allowed back in that game (against Buffalo). He also had zero business playing in a game 4 days later. The NFL should be embarrassed … if they can be.”

Arguably the 49ers’ most renowned concussions involved Hall of Fame quarterbacks Joe Montana and Steve Young. Montana got knocked from a 1986 divisional playoff after a concussion-causing hit from Jim Burt. Young’s final concussion came early in the 1999 season when sacked in Arizona, effectively ending his career.

Last December, the 49ers saw Trenton Cannon endure a concussion covering the opening kickoff, and after being taken by ambulance to a local hospital, he wasn’t cleared until two month laters for the NFC Championship Game. Nick Bosa exited the 49ers’ playoff opener at Dallas with a concussion but did not miss the ensuing win at Green Bay.

Of the multiple injuries Garoppolo’s endured the past four seasons (knee, ankle, calf, thumb shoulder), he hasn’t had a documented concussion.

“It’s a scary situation,” Garoppolo added about Tagovailoa. “You always just hope for the best for a guy like that. We’ve all been in those (serious-injury) situations.”

Of course, some concussions go unnoticed or undocumented publicly. Former 49ers tight end Greg Clark was 49 when he committed suicide last year, after privately battling what later was diagnosed as Stage 3 CTE – chronic traumatic encephalopathy – from a posthumous study by Boston University’s brain bank. “He totally was suffering in silence,” his widow, Carie Clark, recalled in April.

“Do I think they have our best interest in mind? The protocols since I was a rookie (in 2017), they’ve gotten way stricter and a lot better,” Kittle said. “… Sometime the team has to protect you from yourself.”

“If there would’ve been anything lingering with his head, I wouldn’t have been able to live with myself if I prematurely put someone out there and put them in harm’s way,” McDaniel told reporters in Miami.

The NFL already was conducting an investigation into Sunday’s incident before Thursday’s follow-up trauma.  “I know that he was checked after (Sunday’s) game, I know that he was checked the following day,” NFL chief medical officer Dr. Allen Sills told NFL Network’s Judy Battista. “In fact, every player who gets an examination on game day gets a follow-up exam the following day even if that exam was negative — that’s part of our concussion protocol.”

Our interview with NFL CMO Dr. Allen Sills on why Tua Tagovailoa was allowed to fly home, what happened last Sunday and on the subsequent concussion checks during the week, and on whether the concussion protocol could be changed as a result. pic.twitter.com/Q5N9TLBYgt

Lynch noted he’s experienced the “fencing” response position that Tagovailoa exhibited except for ever seeing fingers lock up like they did to Miami’s quarterback.

Lynch lauded the NFL’s strides in concussion management. “From the days I played where it was, ‘Hey, how many fingers do I have up?’, and you’re back in the game, to (now), there is a thorough and laborious and so many cross-checks in the concussion protocol.”

Still, with so many independent evaluations necessary to keep playing, Lynch noted: “It begs the question, having what happened in Miami the week before: What went wrong there? Playing on a short week, he was cleared (a) to go back in the game in Miami (last Sunday) and cleared to play against Cinicnnait last night.

“I can tell you, for real, that process is intense and has so many different avenues to catch a mistake,” Lynch added. “I can’t imagine it becoming more intense and more laborious, but I’m sure it will, and it’s important it is, because something was missed.”

Tua was clearly concussed on Sunday and had zero business being allowed back in that game. He also had zero business playing in a game 4 days later. The @nfl should be embarrassed……if they can be. #coveryourass pic.twitter.com/FAkaJ7PksI

Dr. Chris Nowinski, who co-founded Boston University’s CTE Center, tweeted before Thursday’s game that he  not only feared for Tagovailoa’s health but how playing him would be a “massive step back” for the NFL’s concussion care. Nowinski followed up with strong condemnation upon Tagovailoa’s first-half injury. “This is a disaster,” Nowinski tweeted. “Pray for Tua. Fire the medical staffs and coaches. I predicted this and I hate that I am right. Two concussions in 5 days can kill someone. This can end careers. How are we so stupid in 2022.”