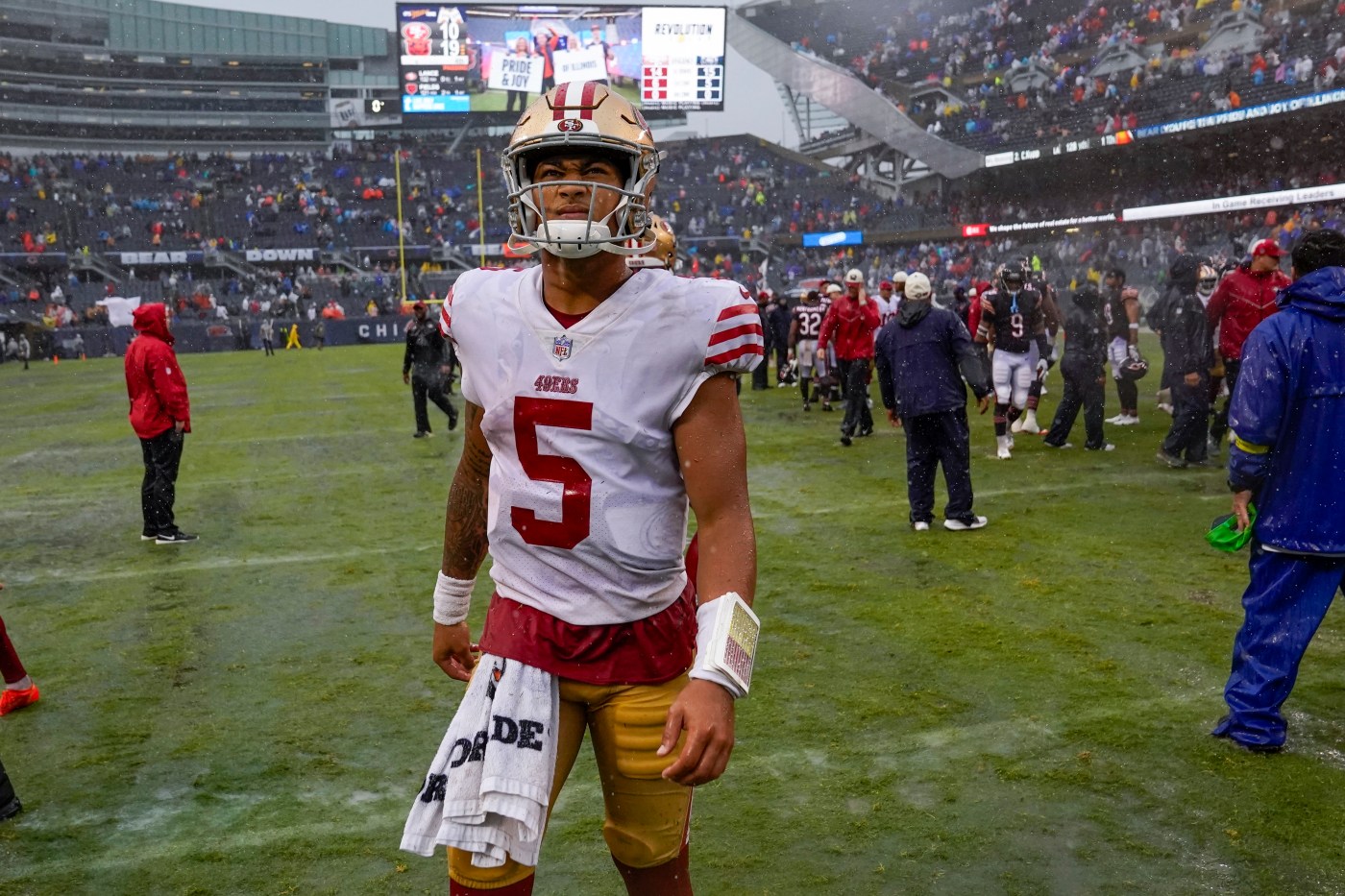 The 49ers have seemingly had at least one “rain game” per season that severely impacts their offensive capabilities.

Now, after starting the season with a downpour in Chicago and a miserable showing against the Bears, it appears the Niners will have yet another rainy Sunday to play through.

Weather forecasts show that rain is expected to come to the Bay Area in full force on Sunday — right in time for the 49ers’ home opener at 1:25 p.m. against the Seahawks.

While many will welcome the cooler temperatures after recent heat waves and the precipitation in the middle of a drought and wildfire season, the 49ers and head coach Kyle Shanahan have really struggled to run their offense consistently in the wet weather over the past several years.

Since 2019, the 49ers have played four games in what could be considered significant rain, and in the three before this season, their offense performed well under their season average each time.

In 2019, when they averaged 29.9 points per game in the regular season, they only put up nine points in Washington, but their defense pitched a shutout to pull out a 9-0 win. Six weeks later, they lost 20-17 in a dreary Baltimore rainstorm — making those two games the only times the 49ers scored fewer than 20 points all season long.

While they did get to 18 points against Indianapolis on Oct. 24 last season, they recorded a season-low 13 first downs and had a season-high four turnovers in a 30-18 loss.

But when you throw Lance’s stat line in from this past week, it mirrors Garoppolo’s output from rain games a little too well, for San Francisco’s liking:
2022 at Chicago: completed 13-of-28 passes, 164 yards, 0 TDs, 1 INT

Lance was at least able to add more offensive value with his legs, tallying 54 yards rushing on 13 carries. But it was clear, to the young quarterback, that the weather was a factor in the passing game, especially on the screen passes the Niners like to run to their top receivers.

“Not using the weather as an excuse, but in the weather in that situation, like catch and throw are some of the hardest throws with those balls,” Lance said on Wednesday. “Just because you don’t know what the ball is going to be like when you take a seven-step drop or a five-step drop, you can kind of feel the ball, spin the ball, find a dry spot or find a spot where it’s not a disaster. But yeah, there were some ugly ones out there on Sunday for sure.”

Lance said he did not try throwing with a glove on his right hand last week in the run-up to Week 1 because they didn’t think the weather would turn out that bad. But he also admitted, “I don’t know, honestly, if a glove would’ve saved me at all.”

If nothing else, the 49ers are adjusting how they prepare for the wet weather, knowing Sunday’s forecast (and it’s worth noting that long-term weather forecasts are also showing a decent chance of rain in Denver, where the 49ers will play on Sunday Night Football in Week 3).

But more important than the weather is taking care of the chances they do get — no matter the conditions.

“For sure we’ll throw wet balls later in the week, but that’s not something that we’re a whole lot worried about,” Lance said. “I thought the first half we had every opportunity in the world. But if we get in that fourth quarter situation, it’s a little bit different.”