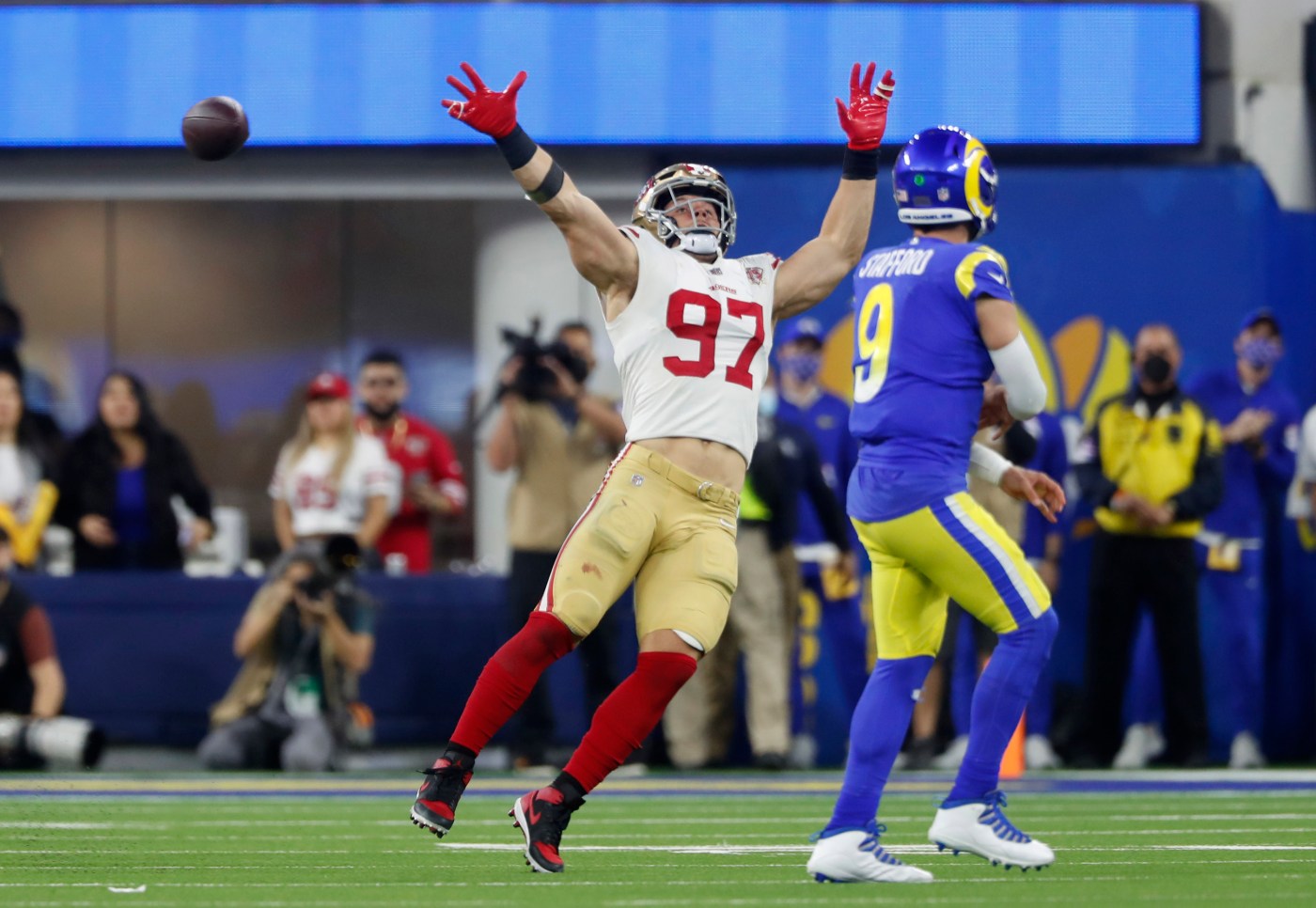 SANTA CLARA — Perhaps it’s too hyperbolic to predict what riches this 49ers’ roster will bring, specifically a Super Bowl win over the Chargers, just like their last Lombardi Trophy in January 1995.

The NFC is there for the taking. The 49ers have reached two of the past three NFC Championship Games. Their roster, as displayed Tuesday in its initial form, looks loaded.

They made it through the offseason, training camp and the preseason without a season-ending injury to a starter, although they’ll certainly miss safety Jimmie Ward for the first four games of this playoff-bound season.

At some point, the shock will wear off from seeing Jimmy Garoppolo suit up as Trey Lance’s backup. Yes, it’s quite the role reversal after Garoppolo just quarterbacked his second NFC title game since 2018 knee reconstruction.

To me, the 49ers are not waffling on Lance’s capabilities nor fearful of his sure-fire growing pains. They’re simply insuring themselves if their mobile quarterback gets hurt, be it from the suspect line’s protection or from running into an open-field tackle. The 49ers can’t have it any other way, so there should be no panic and pulling of Lance for Garoppolo, barring a 2017-esque winless start.

Shanahan, on cue, pointed out that his 49ers, since 2017, have had only one season in which they’ve needed only one quarterback (see: 2019, Garoppolo’s ACL comeback). “To have a veteran come through like Jimmy, who has proven himself in this league, how good of a quarterback he is, I can’t think of a better situation,” Shanahan said.

Doubling down on QBs? Do it.

The 49ers immediately should take their $13 million in salary cap savings from Garoppolo’s revised deal and beg Nick Bosa to sign an extension. Bosa is poised for a massive year, or what the kids call a 20-piece (in sack numbers).

Because Bosa is such a pro’s pro, he didn’t report to camp clamoring for a new contract. He knows it’ll come and he’ll just go out and do his job at a stratospheric level. He’s set to earn $18 million next year on his fifth-year option, and even that could be a bargain, which he likely won’t play for and await an extension next summer.

Money aside, what will boost Bosa even further is the 49ers’ best defensive front of his career. He’ll thrive in concert with Javon Kinlaw, Arik Armstead, Samson Ebukam, Drake Jackson, Charles Omenihu and more. That defense extends beyond their likely 10-man rotation on the line to the NFL’s best linebacker corps, all of which is backed up by a seemingly deeper and crisper secondary.

Tuesday’s biggest roster cuts took out Jordan Willis and Kemoko Turay, and both returned Wednesday, Willis on the roster and Turay the practice squad.

This is a run-oriented offense. Or did the bevy of running backs not make that clear, including all-world fullback Kyle Juszczyk. Trey Sermon survived Tuesday’s cuts only to get waived Wednesday, affirming the 49ers’ belief they had better options than extending the scholarship of a 2021 third-round pick. Tuesday’s cut was JaMycal Hasty, whose speed made him useful the past two seasons but he’s too undersized as a third-down back or special-teams asset.

So, with Elijah Mitchell apparently recovered from camp’s hamstring injury, the 49ers backed him up with not only the charismatic Jeff Wilson Jr., not only the hard-rushing rookie Ty Davis-Price, but also the undrafted rookie Jordan Mason.

That should alleviate any concern Deebo Samuel has about getting his body battered as a rusher. Throw in Lance’s rushing ability, too, and the 49ers certainly should be a top-three rushing team once again.

Lance won’t be just throwing a cast of nobodies. Remember five years ago when the 49ers brought in a whole new group of wide receivers? Well, now there are proven commodities and the best group rostered under Shanahan and general manager John Lynch.

They’ve got an All-Pro in Samuel. They’ve got Brandon Aiyuk to build off his summer bromance with Lance. Jauan Jennings won’t be under too much pressure as a No. 3 wide receiver, because splitting reps will be new slot option Ray-Ray McCloud and a long-sought deep threat in rookie Danny Gray.

And don’t forget about George Kittle. A young quarterback’s best friend can be the tight end, especially one who is arguably the best in the world at his job (both at running after the catch and pancake-blocking defenders).

Sure, this final category could be how Charvarius “Mooney” Ward will enlighten the cornerback corps or how Trent Williams will cover the offensive line’s issues or how Fred Warner and the linebackers look out for blood. All true. But this roster also reflects the 49ers’ confidence in a greatly revamped coaching staff.

Shanahan has only four assistants remaining from his initial 2017 staff. He is banking on his coaches, new and old, to groom a mostly homegrown roster.

No coaching aspect is more important than how Shanahan puts Lance in position to succeed. After a couple of years of bland calls, expect some innovative plays. This is what Shanahan has been waiting for since Draft Day 2021 (or probably longer than that).

Of the NFL’s 32 teams, 10 hired new head coaches this year. Shanahan is entering Year 6, the 49ers’ longest tenure since Steve Mariucci (1997-2002). He has ownership’s full support. He has a championship-caliber roster. He has an open window, and it’s time to close out a championship run without fourth-quarter incident, once and for all.