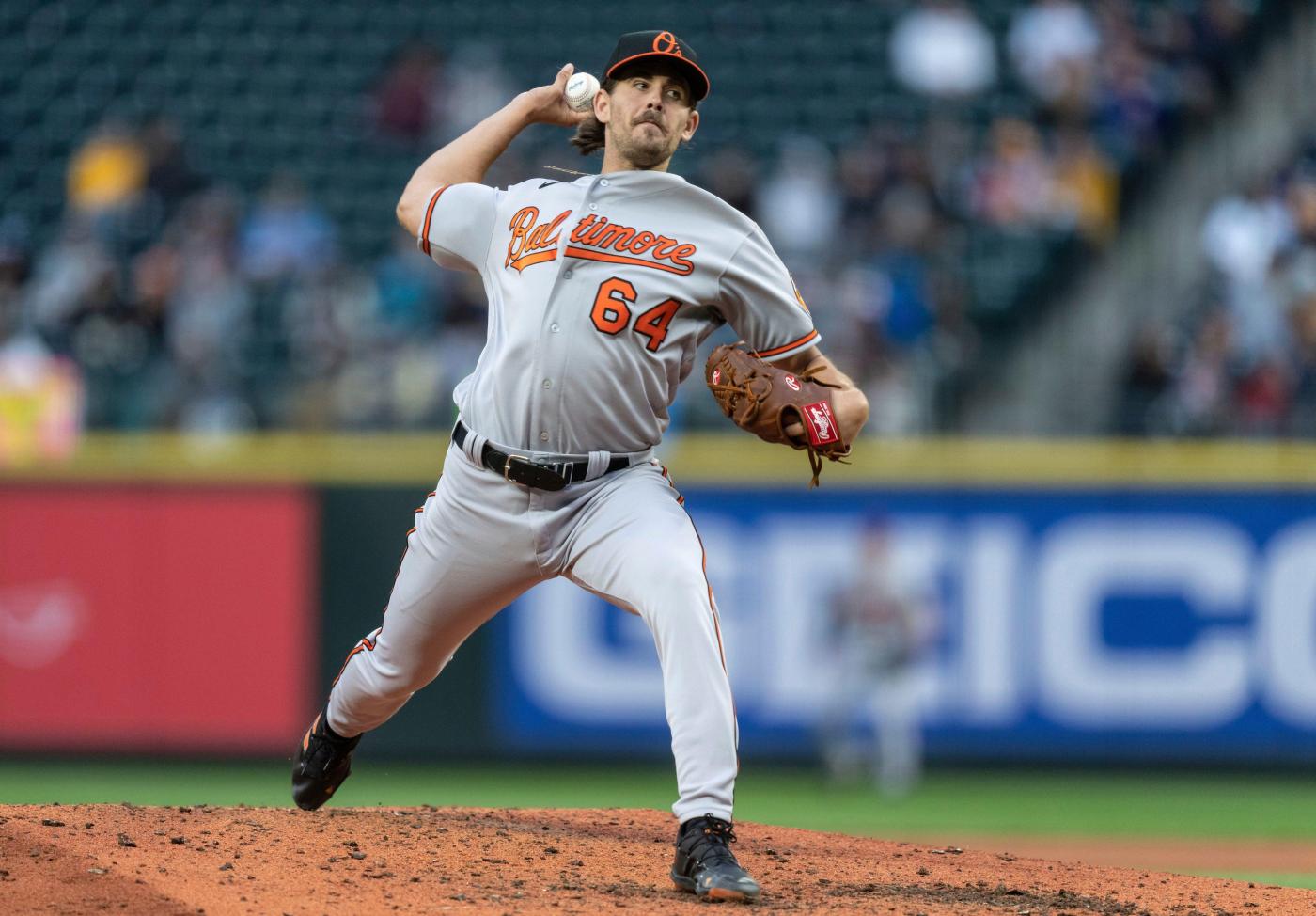 On Monday, the Orioles will play their 81st game of the season, officially signifying the 2022 campaign’s midpoint. Manager Brandon Hyde has “mixed emotions” as his club approaches that benchmark.

“I feel like we’ve improved,” Hyde said. “I’m happy, but I’d also like to win some of these games.”

They enter that halfway marker at 36-44, a significant uptick from the level the rebuilding club has played at in recent years. In the 2018 season that sparked this process, Baltimore was 23-59 after Game 81, with an identical record in 2019. After 2020′s shortened season, the Orioles were 27-54 midway through 2021.

Along with the record, they’ve also been far more competitive within the games themselves. They have been outscoring by 26 through these 80 games but had a run differential of minus-112 at this point last year.

“It hasn’t been like in years past, where it seemed like once a series we got blown out,” said Trey Mancini, the team’s longest-tenured player. “Although the record isn’t where we want it to be — it’s not the goal, by any means — I think the improvements that we’ve seen from years past, especially last year into this year, has been really, really great, and it’s something that I wanted to see this year, some tangible improvements.

“It’s way more fun. It’s been great seeing a lot of these guys grow and come into their own, and it’s been really cool to be a part of.”

Baltimore remains several steps from contending, but this uptick shows the rebuilding efforts are beginning to pay off. Before the Orioles officially completely it, here are five takeaways from the first half of their season.

The pitching is much better …

The most obvious improvement is the massive leap Baltimore’s pitching staff has taken, particularly in the bullpen. Four of their primary relievers in closer Jorge López, left-handed setup man Cionel Pérez, and right-handed options Joey Krehbiel and Bryan Baker came to the organization on waivers, castoffs from other organization’s rosters; they collectively have a 2.57 ERA.

It took a decade for Félix Bautista to reach the majors after he signed with the Miami Marlins as a teenager. He owns a 1.42 ERA as one of Hyde’s primary setup men, throwing twice as many pitches at 100 mph or more as all other Orioles since 2008 combined.

After struggling in Baltimore’s rotation, left-hander Keegan Akin has emerged as one of the top long relievers in baseball. Of the current group, only right-hander Dillon Tate made more than eight relief appearances for Baltimore last season, and he dropped his ERA to 2.11 by closing out Sunday’s win against the Minnesota Twins.

The rotation has improved, too, especially recently. Over the past two weeks, it has a 1.46 ERA, and only once has a starter allowed more than one earned run in that 13-game span. Veteran Jordan Lyles, signed this offseason to the largest free-agent contract of Mike Elias’ general manager tenure, has been a role model for the other starters, who celebrated Father’s Day with shirts featuring Lyles’ face and “Best Dad Ever.” After having his confidence and pitches bludgeoned last year, Dean Kremer has a 1.29 ERA through five starts. Tyler Wells has gone from Rule 5 pick to mop-up reliever to closer to legitimate major league starter in a two-year span.

By making Wells a starter and López their closer, the Orioles effectively swapped their roles, and they’ve since combined for a 2.63 ERA. Even Hyde didn’t see the results coming.

“I had no idea what this was going to look like, from Tyler’s standpoint and Lopey’s,” Hyde said. “That’s been — I wouldn’t say a surprise — but it’s been fun to watch.”

… even without expected contributors

Less than a week before the season, the Orioles acquired a draft pick and three prospects from the Miami Marlins for Tanner Scott and Cole Sulser, two relievers who figured to be in the mix to close. Paul Fry, the team’s longest-tenured pitcher, lasted barely a month into the season before being designated for assignment, unable to recapture his effectiveness from 2020 and the first half of 2021.

Ace starter John Means didn’t even make it that long before his season ended because he required Tommy John elbow reconstruction surgery. Top prospect Grayson Rodriguez was trending toward a debut when a right lat muscle strain possibly cut his season short, too, while fellow minor leaguer DL Hall is still finding his way at Triple-A. As spring training began, each of those pitchers figured to play significant roles for the Orioles. Baltimore will end the first half getting 21 collective innings from them.

The Orioles would certainly welcome Means and Rodriguez to their rotation, and the possibility of them both being there in 2023 hints at what could be in store for Baltimore. It’s fair to wonder whether the presence of Scott and Sulser might have prevented the emergence of not only López but also Pérez and Bautista, two pitchers who have more years of team control remaining and thus are more likely to contribute to what is hoped to be winning seasons in the near future.

But May 21, 2022, will long be a benchmark to look back on for this organization, and Sunday was the Orioles’ 40th game with Rutschman after playing 40 games without him. Since his promotion following a right tricep strain, they are 20-20, compared to 16-24 before. In those first 40 games, Baltimore hitters posted a .648 OPS and averaged 3.48 runs per game. They’ve scored over a run more per game with Rutschman on the roster at 4.58 and entered Sunday with a collective OPS of .704.

There’s a correlation-causation argument to be made, but Rutschman’s presence has deepened Hyde’s lineup, even if he’s experienced up-and-down production. He posted an OPS of .408 in his first 64 plate appearances and then a 1.147 mark over the next 54. He went hitless in his final 18 at-bats of the road trip.

A year ago at this time, Cedric Mullins was establishing himself as an Orioles fixture, days from being announced as an All-Star en route to the first 30-30 season in franchise history. Baltimore hasn’t yet received that kind of breakout from any hitters this year.

After setting a franchise rookie record for home runs last year, Ryan Mountcastle is on a current run that has him leading the American League in extra-base hits since the start of June, but his overall numbers aren’t too far from last year’s. Austin Hays will enter Game 81 with an OPS below .800, though it’s an uptick from his final 2021 mark of .769, which required a strong September to reach. Mancini was showing more power at this point a year ago, though that’s partially a byproduct of Camden Yards’ new left field wall taking five home runs from him. Still, he’s striking out significantly less and, in his final year before free agency, showing he’s a player who can help a contending team.

With pitchers adjusting after last year’s showing, Mullins’ bat has hovered around league average for much of this season, but he’s performed better of late, with Hyde saying he expects him to “have a real good second half.” In half as many plate appearances, Anthony Santander has already walked nearly as much as he did in the 2020 and 2021 seasons combined, but his slugging percentage is his lowest across the past four seasons.

None of these players have necessarily taken a massive step forward, but their collective improvements paired with the addition of Rutschman has led to a much improved upper portion of the lineup.

The lower third of the lineup is a different story. Through 80 games, the No. 7 though No. 9 spots have featured the Orioles’ second baseman, third baseman or shortstop exactly two-thirds of the time, with the majority of the exceptions being a catcher other than Rutschman. Entering Sunday, Baltimore’s players at those infield spots hit .192 (worst among 30 teams) with a .257 on-base percentage (29th) and .333 slugging percentage (28th) while striking out an MLB-high 28.2% of the time.

But solutions are only one step away. Infielders Gunnar Henderson, Jordan Westburg and Terrin Vavra — respectively the organization’s Nos. 3, 7 and 13 prospects, according to Baseball America — all entered Sunday with OPSes above .900 for Triple-A Norfolk. A potential trade of Mancini might also open the door for No. 9 prospect Kyle Stowers, who made his debut earlier this season as a substitute player in Toronto, leading to a late-season lineup that looks something like: Mullins, Hays, Santander, Mountcastle, Rutschman, Henderson, Stowers, Westburg, Vavra.

That’s four players up top who have established themselves as key pieces during this rebuild, with Rutschman in the middle in front of four others who were acquired as part of it. It’s a group that could certainly build momentum into 2023.

The Orioles open a weeklong homestand with the Texas Rangers, a team their veteran players have ties to. Lyles spent the previous two seasons there. Catcher Robinson Chirinos had stints for Texas from 2013 to 2018 and again in 2020. Second baseman Rougned Odor began his career with seven years as a Ranger.

Baltimore then hosts four games against Shohei Ohtani, Mike Trout and the Los Angeles Angels. Orioles infielder Tyler Nevin’s father, Phil Nevin, is the Angels’ interim manager, though he’ll miss the first two games of the series finishing off a 10-game suspension stemming from a brawl last week against the Seattle Mariners. Given his duties as a major league coach, Phil has yet to see Tyler play in the majors.

As noted, the Orioles’ rotation has been good for a couple of weeks now, but last week was particularly impressive. In six games, Baltimore starters allowed five earned runs in 33 1/3 innings — a 1.35 ERA. Wells bookended the week with a pair of starts in which he struck out 10 in 11 innings while allowing two runs, with Kremer, Lyles and Spenser Watkins having quality starts between.

Like each of those three, Wells’ outing Sunday featured him going at least six innings and allowing no more than one run. The Orioles’ four such starts last week is one fewer than they had entering it.

A solid week for the Orioles could have been two wins better. López finally had a blip on his dazzling season, blowing saves and allowing walk-off hits against Minnesota both Friday and Saturday. Hyde gave López a day off Sunday despite a save situation presenting itself, and he most certainly remains the Orioles’ closer. They have faith that he’ll return to his dominant form.

As the Orioles’ No. 4 prospect, Hall understandably drew much of the attention after Norfolk’s one-hitter Friday, in which he recovered from a shaky week with four shutout innings, eight strikeouts and only one walk. But Chris Vallimont was arguably the star of the night, following Hall with five hitless innings and striking out six.

Like Hall, Vallimont, 25, is on Baltimore’s 40-man roster — he was claimed from the Twins in late May after he struggled mightily for their Double-A affiliate. The Marlins’ fifth-round pick in 2018, Vallimont has allowed seven earned runs in 22 innings (a 2.86 ERA) in the upper levels of the Orioles’ system, with six of those runs coming in his Triple-A debut. He’s struck out 28 while walking six in that span, after issuing 23 walks with 20 strikeouts in 19 innings this year in Minnesota’s system.