A 9/11 victim who was one of only two people not pictured on a tribute wall to all 3,000 victims has finally been memorialized with a photograph.

Albert Ogletree’s photograph was tracked down in an old high school year book in Michigan and added to the wall of victims at the National September 11 Memorial & Museum in New York City ahead of Sunday’s 21st anniversary of the terror attack.

Previously an oak leaf had occupied the spot, but a photo of Ogletree attending Romulus High School in Michigan as a freshman in 1966 has now replaced it.

Ogletree was working in the cafeteria of the financial services firm, Cantor Fitzgerald, in the World Trade Center’s North Tower on September 11, 2001, when terrorists flew a hijacked plane into the building. He did not survive the attack, and his wife died just three years later.

The couple did not have any children, and Ogletree was very camera shy, making it harder to track down a photo of him.

‘It is a place no one wishes their loved one to be seen, given the circumstances of why they are there,’ chief curator Jan Ramirez said. ‘Nonetheless, it is so rewarding to retire that leaf icon tile with the replacement of this quietly compelling portrait. 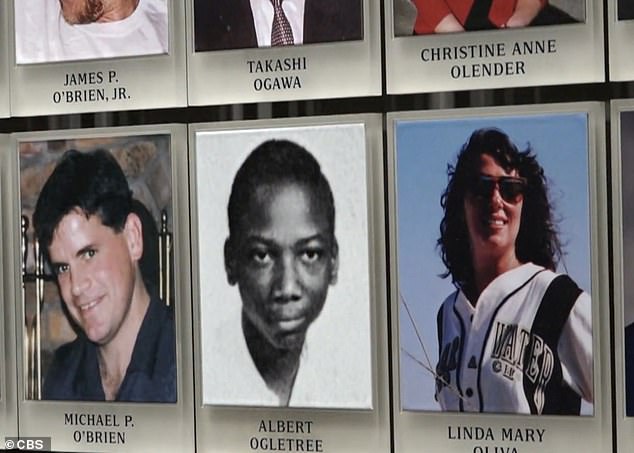 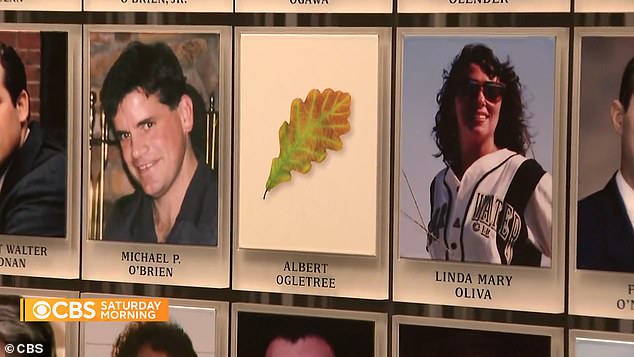 The name of Albert Ogletree, who was killed on 9/11, was a name represented by an image of an oak leaf at the National September 11 Memorial & Museum in New York 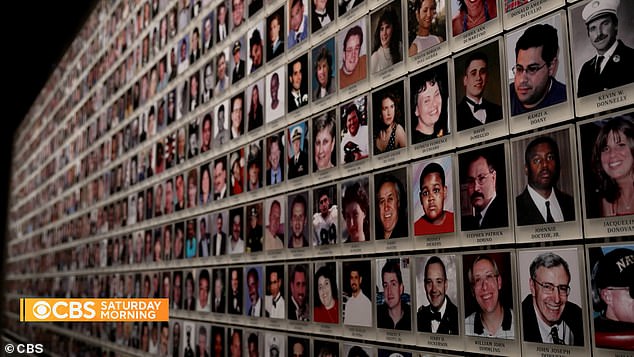 ‘It sets up immediately the diversity of the victims, the magnitude,’ Ramirez said to CBS News. ‘When people are in the gallery they will go to the wall and they will find faces that intrigue them.’

In their attempts to find out more about him and obtain his photo, the Museum staff had tried, unsuccessfully, to locate his employment records at Forte Foods, which serviced Cantor Fitzgerald.

Ogletree’s stepdaughter had also paid tribute to him with a Facebook post, but she did not have a photograph of him.

‘It always bothered me that they didn’t have photos — there was a hole in their stories that needed to be filled,’ said Llera, 30.

‘I spend most of my time doing admissions and answering questions from visitors in the galleries, but I really wanted to take this on,’ he said.

He approached genealogy company Ancestry.com who managed to find an address for him in Romulus, Michigan, about 23 miles southwest of Detroit. 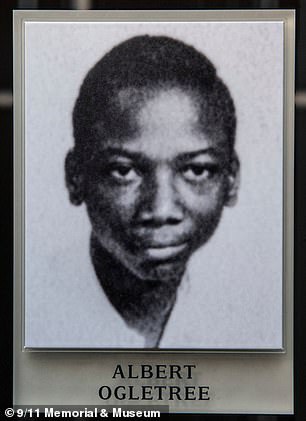 Albert Ogletree is pictured during his freshman year in 1966, when he was 15

‘I felt that maybe if I could find where he went to high school that maybe they would have a photo of him,’ Llera said.

Llera was able to pinpoint the high school he attended and contacted them for a photo but the school did not have an archive of their yearbooks from the 60s.

Romulus councilwoman and retired math teacher Kathy Abdo located Ogletree’s black and white photo for the museum last year by looking through the yearbooks which had been housed at the city’s Historical Society.

‘The school called me and said — you know, we got this request and we don’t have any photos — and I said, ‘I’ll look into it,’ Abdo told the Free Press. ‘The fact that a Romulus student died in 9/11 made me feel an obligation to find his picture.’ 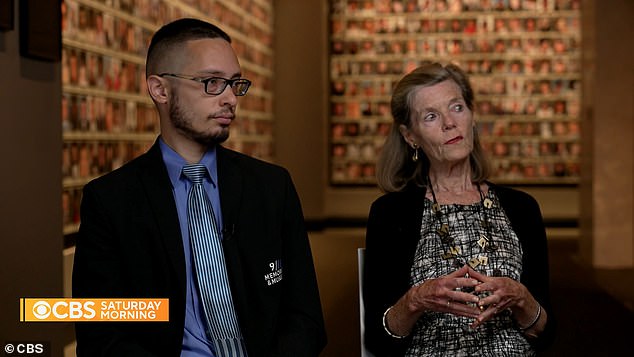 Grant Llera, left, was the museum worker who tracked Ogletree’s picture down 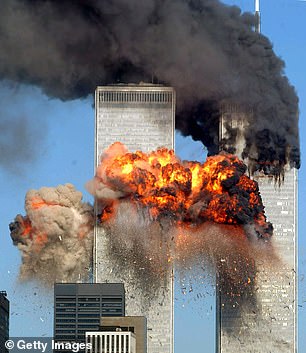 Smoke and flames billow from the World Trade Center’s twin towers after they were struck by commercial airliners in a terrorist attack on September 11, 2001 in New York City

‘I had an idea of what decade he was in Romulus so I went over and went through all of the yearbooks in the 60s,’ Abdo explained.

‘I had to go through page by page and that’s where I found Albert Ogletree. It just seemed to be the right thing to do.’

The picture of him was taken when he was about 15-years-old and is now in its rightful place on the wall at the museum.

Ogletree was born on Christmas Day in 1951 and lived in Romulus with his parents and a sister. He later moved to New York and married.

The museum said it found an obituary for Ogletree’s wife, who died in 2004. The couple had no known descendants.

He did, however, have a stepdaughter, Justine Jones, who had posted a tribute online.

She recalled Ogletree as ‘a loving man who played an important role in her life,’ and a ‘skillful electronics repairman.’ 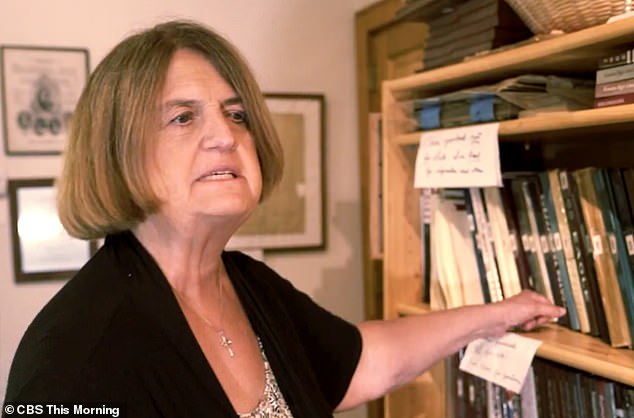 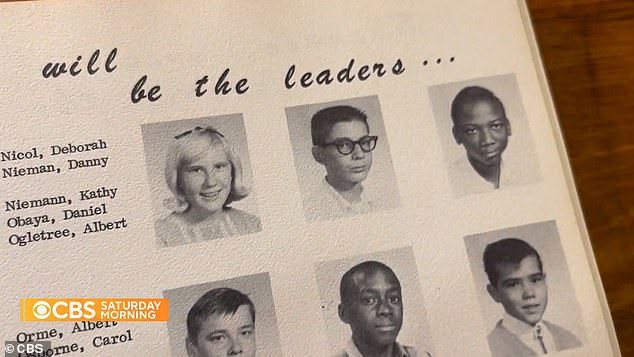 Ogletree’s image was located in his high school yearbook

Jones confirmed that the youthful yearbook photo was indeed Ogletree, whose appearance had remained largely unchanged over the years.

‘She said his face was the same as she remembered, and she was really happy to have a photo of him,’ Llera said.

Jones said she did not have any photos of him because ‘he did not like having his photo taken and was camera shy.’

Now only one space remains unfilled. The last identified victim whose photo has still not been found is Antonio Dorsey Pratt.

‘I’d like to also find a photo of Antonio, but at least we now have some answers about Albert,’ Llera said. ‘Finding this small reminder of him makes me think of the motto we have at the exhibit: ‘No day shall erase you from the memory of time.”

In New York, 2,753 people died. Another 184 were killed at the Pentagon in Washington D.C., while 40 died on United Airlines Flight 93 which crashed in a field Pennsylvania. 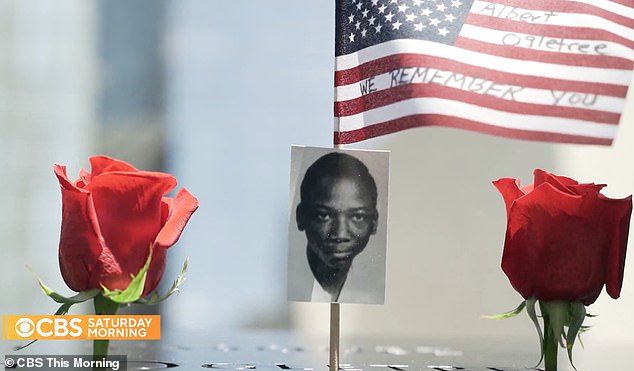 Finally, Ogletree’s name has a photo to accompany it ensuring he will never be forgotten