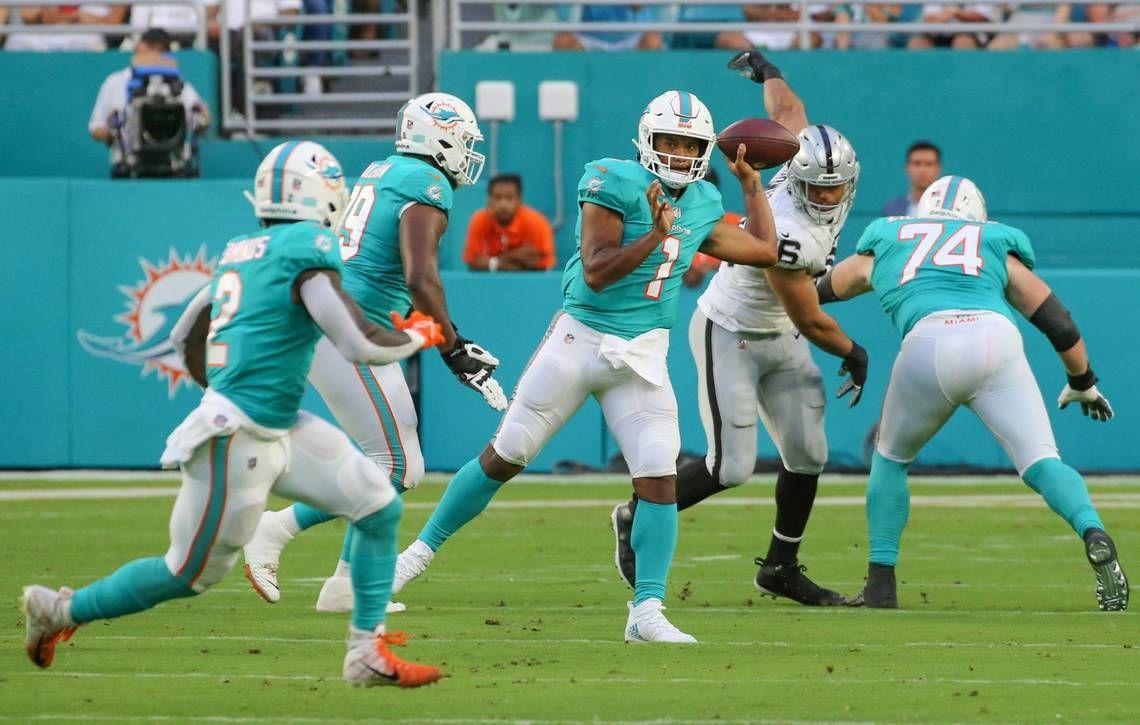 That’s stretching the reunion of sorts between former Alabama quarterbacks Tagovailoa and Hurts in joint practices this week between the Philadelphia Eagles and Miami Dolphins.

Hurts, of course, was famously replaced as Alabama’s quarterback in the fourth quarter of the 2018 national championship game against Clemson. Nick Saban never looked back from that decision as Tua rallied Alabama to the title. Hurts transferred to Oklahoma but remains friends with Tua.

“That’s a relationship that’ll never go away,” Hurts said on ESPN before the 2020 draft. “I talk to him and kept in touch with him all year.”

As far as who has the better season this year? Tua’s supporting cast has been vastly improved. But …

One constant between the two is neither has had much consistency with coaches. Tua is on his third offensive coordinator with the Dolphins in three years (or fourth depending on how your grade last season’s two-headed monster leading the offense).

Hurts is in the, “same offense with the same offensive coaches for two years in row for the first time since he was 16 years old,” Paolantonio said. “He goes to California and gets three or four weeks of really good training on his footwork and mechanics, and it’s really showed. He’s delivering the ball definitely with more velocity and accuracy, now he just has to make quick decisions.”

Reminder: Everyone looks good in preseason.

2. Former Minnesota and Dolphins GM Rick Spielman, who was at Dolphins practice recently, offered a spot-on breakdown of the season on The 33rd Team website:

“Miami will play good defense this year, but they have to be concerned about the depth at cornerback. They don’t have much depth behind Xavien Howard and Byron Jones [who is on PUP list]. Miami has enough offensive weapons, and QB Tua Tagovailoa should be able to get the ball into the hands of his playmakers, but unless the offensive line improves, they will struggle. The key to coach Mike McDaniel’s offense is being able to run the ball. In Miami’s first two preseason games, they have really struggled to establish the run game. Mike Gesicki, who they franchised this past offseason, has also struggled in this new scheme. Tight ends must be able to block in this scheme, and that is not Gesicki’s strong suit. Will Miami potentially try to trade him?”

Next question: Does any team with an abundance of cornerbacks want a receiving tight end? There’s the market for Gesicki if a trade can be swung involving his $10.8 million francise tag, because …

3. Bill Parcells had a number of good sayings, one of which was, “You never have enough tackles and cornerbacks.” What are the thinnest positions on the Dolphins? Tackles and cornerbacks. They’re flashing red lights at this point. The Dolphins are set at cornerback if Howard, Jones and Nik Needham are healthy. But Jones hasn’t practiced all summer after surgery, and it’s a finger-crossed situation of him starting the season. Behind them? More finger crossing as no one has impressed much and Trill Williams is out for the year. At tackle, Terron Armstead hasn’t played a full season in his eight years, missing 38 of 112 regular-season games since becoming a starter in 2014. Greg Little has been hurt this preseason and Larnel Coleman still needs work.

4. The Dolphins rank 15th on NFL franchises’ worth, according to Forbes magazine. They put the Dolphins’ worth at $3.42 billion, up 18 percent from a year ago. Steve Ross bought the Dolphins and Hard Rock Stadium for $1.2 billion in 2009. The Dallas Cowboys topped the Forbes list at $6.5 billion

5. “Whatever,” was Mike McDaniel’s word of choice when asked about Skylar Thompson making the 53-team squad. “I’ve done it both ways in my career.” Thompson looks like he’ll make the team without being risked to lose through waivers to the the practice squad. Then again, if you go through the list of third-team quarterbacks, several are putting up good numbers. It’s the same story every year: People fall in love with third quarterbacks in preseason. Last August, the Dolphins Reid Sinnett completed 30-of-47 passes for 401 yards, two touchdowns and an interception. He was signed to the practice squad. He was waived in October and Philadelphia signed him. He comes to joint practices this week against the Dolphins as their third quarterback behind Hurts and Gardner Minshew.

5. So Rob Gronkowski and Tom Brady were talking to the Raiders while Gronkowski (at least) was under contract? Fire up the tampering investigation.

6. What to expect from Philadelphia? Again, it led the league in rushing last season (159.7 yards per game) so this should be a good test for a defense that held up the second half of last year right until Tennessee ran over it. Center Jason Kelce was a first-team Pro Bowl selection, but when he took a break with an injury this preseason second-round rookie Cam Jurgens has been impressive, as analyst Warren Sharp comments. Imagine. Two centers.

7. While the Dolphins practice against Philadelphia, New England heads to Las Vegas for a joint practice and third preseason game. Beyond practicing against long-time coordinator Josh McDaniels’ team, the Patriots’ idea was to get some work in the hot weather, considering the opener at Hard Rock Stadium. The forecasted highs will be as much as 105 degrees. Still, Saturday’s game is in a dome and the opener is two weeks away. The Dolphins’ 1 p.m. games in September are the best home-field advantage in the NFL.

8. You see Tua making the necessary steps toward maturation by watching him go through the play script on the field alone hours before Saturday’s game. It all fits. Former coach Brian Flores was pushing him to work harder, and there were questions about his knowledge of the playbook in his first year and of playing golf his second season. In Year 3, with this staff’s full backing, he’s taking lessons learned and seems to be applying himself harder.

10. Quote of Last Week: “I just want offenses to fear me,” safety Jevon Holland said. “Really not necessarily the quarterback, more of the coaches.”