Are buy to lets back in business? Why being a landlord still stacks up

When it comes to ups and downs, buy to let has been the roller coaster ride from hell.

It all began in the late 1980s as part of the Thatcher Revolution sweeping Britain.

People were encouraged to buy a property to enjoy capital appreciation and rental income, often as a way of complementing a pension in later life. 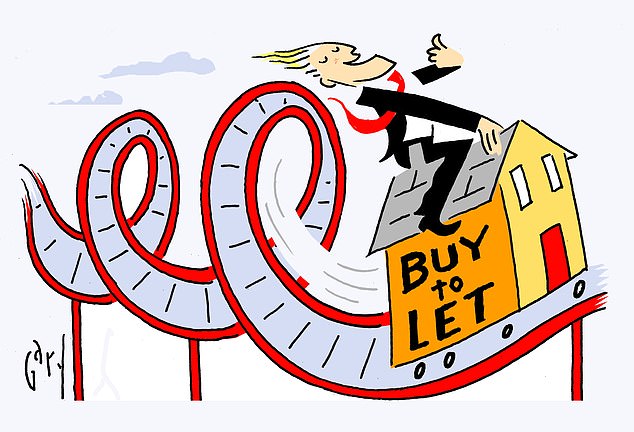 Buy to let boom: Lettings agency Hamptons says in the first quarter of this year, 13.9% of homes sold across the UK were to landlords – the highest proportion since 2016

New laws meant landlords could get their property back quickly if required, a special category of mortgage was invented, and tax perks encouraged people to get on board.

Some 1.7million buy-to-let mortgages were issued in 15 years and the private rental sector doubled.

But in the past decade, most tax perks have been withdrawn, regulations tightened and in many areas strict council controls require £1,000 licences.

Despite this, landlords appear to be snapping up buy-to-let properties: Lettings agency Hamptons says in the first quarter of this year, 13.9 per cent of homes sold across Great Britain were to landlords — the highest proportion since 2016.

So is it still worth becoming a buy-to-let landlord? Amazingly, perhaps, the answer according to many experts is ‘yes’.

‘It’s more complex and more heavily taxed than before, but demand is stronger now than at any time I have known in 30 years,’ says Tony Morrow, a Yorkshire property consultant.

Meanwhile, the capital values of homes have risen by an average 10.7 per cent in the year to June, according to Nationwide.

So if you are considering taking the plunge, what should you look out for?

Most landlords have just one or two BTLs for 15 years. That way they see appreciation if prices rise and the big costs are spread over a longer term.

There are horror stories of tenants-from-hell and rogue landlords, but that’s not typical.

Government figures out this month show 83 per cent of tenants never even consider complaining about their property or landlord.

Small city flats have not risen in value as much as large family homes, so offer a cheaper entry point for a new landlord.

But typical rents will also be lower and capital appreciation may be less.

Almost every part of the UK has demand exceeding supply for rentals, but this is acute in northern cities and university towns.

Get the right mortgage

A broker will advise on the best type of loan to minimise the impact of rising interest rates.

Many lenders offer preferential rates for landlords with properties showing A, B or C ratings on energy performance certificates, ahead of stricter Green regulations expected in three years.

Self manage or agents?

Do you want to be called by an emotional tenant on a Saturday evening when a problem arises? If not, use a letting agent.

Typical charges for an all-inclusive service will be 15 per cent of rental income, and you can offset the agent’s fees against tax.

Check the agent you choose is a member of respected trade body Propertymark.

There’s a 3 per cent stamp duty surcharge on buy-to-let properties while many councils have mandatory licensing schemes — in Leicester it costs £1,090 per property.

Since 2018 there have been minimum energy-efficiency standards for homes to let and these are set to tighten in the future. Consider specialist insurance to cover rent during empty ‘void’ periods.

What’s in the pipeline?

But these ideas are now up in the air with many experts predicting a new Prime Minister and Chancellor will instead ease the taxes imposed on buy-to-let landlords.

On the market… money makers