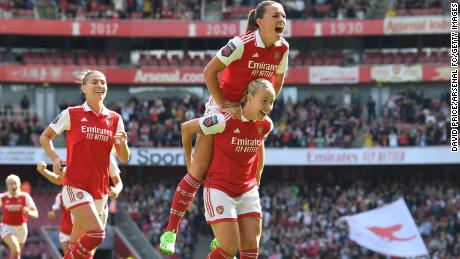 The attendance record was another significant development in a record-breaking year for women’s football, with attendance records also broken at the Women’s European Championships and women’s Champions League.

Arsenal put on a show from the very start for all 47, 367 fans packed inside the Emirates Stadium, with a goal for Beth Mead after just five minutes, before Vivianne Miedema added another two goals either side of Raffaele Souza’s header to complete the rout.

“First of all thank you to the fans for coming. We put on a show and I hope they enjoyed it,” Arsenal’s captain Kim Little told the BBC.

“You’re so aware of it, you can hear it now. It makes a big difference and in the summer the England girls felt it. I’m just happy we were able to put on a performance.”

Though her first effort ricocheted back to her, the Euros Golden Boot winner made no mistake with her second attempt.

Arsenal’s power kept Tottenham stranded in its own half for much of the first half and Spurs could not convert a rare opportunity on 38 minutes with Celin Bizet Ildhusoy unable to deceive the Gunners’ goalkeeper Manuela Zinsberger.

In just five minutes, Arsenal doubled its lead as Spurs conceded possession just outside its own box to the delight of Miedema who pounced on the loose ball and fired it past the backpedaling goalkeeper Becky Spencer.

The Gunners’ dominance continued after halftime with Souza capitalizing on a corner to head the ball into the net.

Once again, the red and white flags either side of the goal unfurled, waving from side to side as if conducting the crowd in its celebrations.

The next cheer came from off the pitch as the record-breaking attendance was officially announced, smashing the previous best of 38, 262 set in 2019 at the Tottenham Hotspur stadium.

And there was still time for more festivities as Miedema headed in her second goal of the afternoon from Steph Catley’s cross into the box.

With these four goals, Arsenal sealed its tenth consecutive WSL win and continued its record of keeping a clean sheet in the WSL since March 6.