As Roquan Smith’s contract strife with the Chicago Bears drags on, it’s difficult to see how this might end. Or when. – The Mercury News 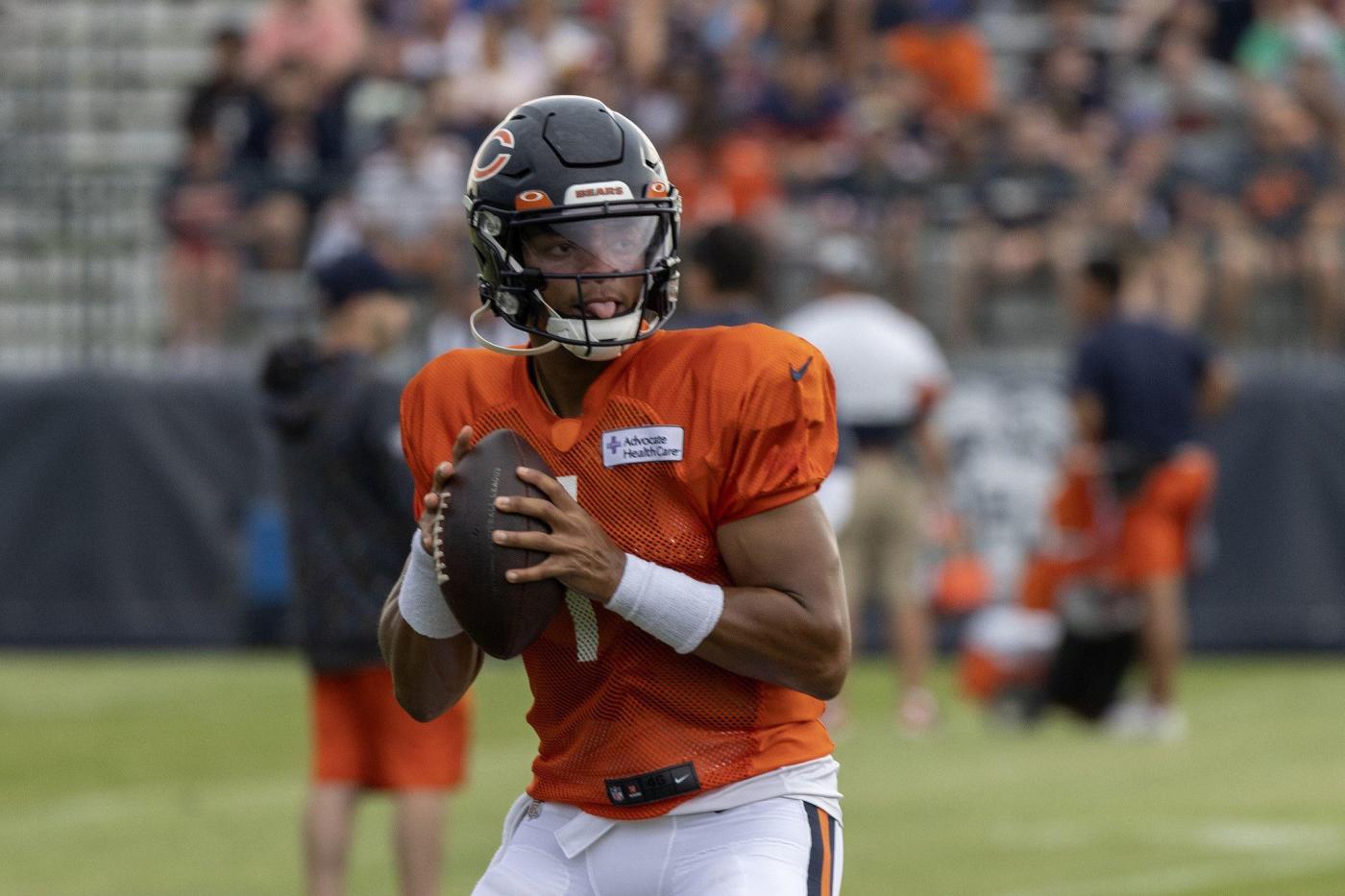 Smith was present for the day’s activities, standing with the defense along the sideline while the rest of his team continued the training camp grind. But for the 15th consecutive practice, Smith was a bystander, a stubborn statue unwilling to break his “hold-in” amid stalled contract negotiations.

After practice, Bears coach Matt Eberflus acknowledged Smith likely will board the team flight to Seattle for Thursday night’s preseason game against the Seahawks. But as the financial joust drags into its fourth week, it’s difficult to predict how this might end. Or when.

“Really I don’t have anything,” he said Tuesday when asked for the latest. “All I can say is that it is where it is right now and we’re day to day. Is he in the building? Yes. Is he engaged? Yes.”

Beyond that, Eberflus declined to say whether the team is disciplining Smith for his refusal to practice while healthy. The outside conjecture is the Bears at least are levying fines against Smith this week. But who really knows?

Eberflus also stressed he feels good about his relationship with Smith and isn’t worried about a potential fracture between arguably his best defensive player and his front-office bosses.

“You’re always working on relationships,” Eberflus said. “And I know I say that a lot. But it’s so important, with Roquan and any other player. It’s important to keep the relationship and communication open and on the table. That’s what we’re trying to do.”

It has been more than a week since Smith threatened the civility of the contract talks, tapping out a 348-word missive and sending it to Rapoport. That was a calculated leverage play by Smith to attempt to rally public support by putting his employer on blast in hopes of accelerating his bid for a record-setting deal.

Smith tried to tug on the heartstrings of Bears fans with references to Wilber Marshall, Mike Singletary, Lance Briggs, Brian Urlacher and Dick Butkus. He expressed his desire to play the rest of his career in Chicago. Then he accused the Bears of refusing to negotiate in good faith.

“Every step of this journey has been ‘take it or leave it,’” Smith wrote. “I’ve been trying to get something done that’s fair since April, but their focus has been on trying to take advantage of me.”

Just as the sides seemed to be building a bridge across the canyon, Smith lit the guard ropes on fire and publicly postured to be traded.

“As of right now,” he said, “I don’t see a path back to the organization I truly love.”

It was a direct challenge to a new and inexperienced regime that has no track record for resolving such matters. But beyond agitating Poles and his contract team at Halas Hall, it’s hard to know what Smith accomplished with those angry squirts of kerosene onto a fire that had, to that point, been contained.

Now the crackling flames are heard almost daily as Smith’s contract strife hogs the headlines for a team that has so many other things it would rather focus on. On Tuesday, for example, the first seven questions of Eberflus’ post-practice news conference were Roquan-related.

And that’s where this whole ruckus becomes so tricky, especially for Smith, whose leverage at this point isn’t what he probably hoped it would be.

A potential trade? Well, that would require the following:

Through that lens, it’s easy to understand why Poles’ cellphone probably won’t become an auction stage.

Deal or no deal?

From the get-go, Poles and Eberflus have talked glowingly of Smith as a player, believing his production only will increase in a new defensive system that takes advantage of his speed and instincts. But the team’s valuation of Smith’s contributions, past and future, hasn’t reached what Smith believes it should be.

But around the league, the consensus remains that Smith isn’t quite in that class as a game-changer. He’s considered to be a shelf below Leonard, Warner and Dallas Cowboys star Micah Parsons and in a class with other off-the-ball linebackers such as the Tampa Bay Buccaneers’ Devin White and Lavonte David, the New Orleans Saints’ Demario Davis and the Los Angeles Rams’ Bobby Wagner.

That’s not an insult. It’s simply a way to frame how Smith is seen — as a really good player who is pleading to be paid like one of the league’s bigger superstars.

While Smith was a second-team All-Pro the last two seasons, he was ranked No. 84 on NFL Network’s Top 100 overall players list this week.

Even worse for Smith, that sour statement he released last week didn’t bring a stampede of passionate supporters rallying to his defense. Bears fans seem split. Some believe he should be paid every penny he’s asking for, while others see him more as a solid player but not one who will make enough franchise-changing contributions to be worth cleaning out the safe.

Thus the staring contest continues without a whole lot of passion from the audience.

The view of Smith within many league circles is that of a productive, reliable starter who can be a valuable piece on a championship team but likely won’t be the engine of a Super Bowl run. And that’s a big distinction, like comparing an M-80 to a barrel of TNT.

The sense is that, through four seasons with the Bears, Smith has shown he regularly can make energizing, drive-killing stops but hasn’t shown he is a consistent game-changer. In 61 career games, he has 43 tackles for a loss and 14 sacks but only five interceptions and one forced fumble.

Remember that pick-six Smith had in Week 2 last season to spark a Bears takeaway binge in a 20-17 victory against the Cincinnati Bengals? That was exactly the kind of exclamation point that seemed to validate Smith’s rise.

But beyond that, what are Smith’s signature moments over his first four seasons? His first-half interception of Jared Goff in the Bears’ 2018 statement win over the Rams?

What other moments belong on that ballot? And how impactful were they really?

Perhaps Poles is justified in seeking additional evidence that Smith can be reliable off the field and productive on it. Perhaps the GM’s effort to establish a fair price point is prudent.

Earlier this week, word leaked that Smith has had a representative not certified by the NFL Players Association reach out to other teams to gauge interest in a potential trade — in violation of league policy. That prompted a memo from the NFL office to every team warning against engaging in any kind of contract-related discussion with Smith’s camp. It was another head-scratching twist that hasn’t been a good look for Smith.

On the whole, Smith’s body of work through four seasons has been worthy of applause. And the Bears should be able to compensate him well, particularly at a time in their building process when they aren’t allocating significant financial resources to their quarterback.

But Smith also hasn’t been Urlacher or Singletary or Butkus. And to be rewarded as one of the highest-paid linebackers in league history, Smith should have more Hall of Fame-worthy flashes to point to when engaged in the back-and-forth with Poles, director of football administration Matt Feinstein and senior vice president Cliff Stein.

In addition, while Smith is considered a respected figure within the Bears locker room, it’s becoming harder to classify him as one of this team’s biggest leaders. Of the 21 other defenders on the two-deep depth chart, 12 never have played a snap with Smith. Thus they don’t have the kind of emotional attachment to his production or his contract fight that might apply added pressure to the front office.

Take starting middle linebacker Nick Morrow, for example. Morrow entered the league in 2017 as an undrafted rookie out of Division III Greenville University and signed a one-year, $3 million deal with the Bears this spring after five seasons with the Raiders. Morrow described a cordial relationship with Smith on Tuesday but also didn’t seem to be fretting about when or if Smith will be back on the field beside him.

“One thing I learned about this league, there is no certainty,” Morrow said. “I have no certainty. I have no idea what’s going to happen. But I wish the best for the Bears and obviously him. I hope he’s here. But if he’s not? It is what it is. If he is, great.”

From there, Morrow went on with his day as the minutes until the season opener tick by.

A week later, a less dramatic tune was playing inside Halas Hall.

It is what it is.

That’s the equivalent of a shrug — which seems to be a common reaction to many of the episodes in this miniseries. What now?