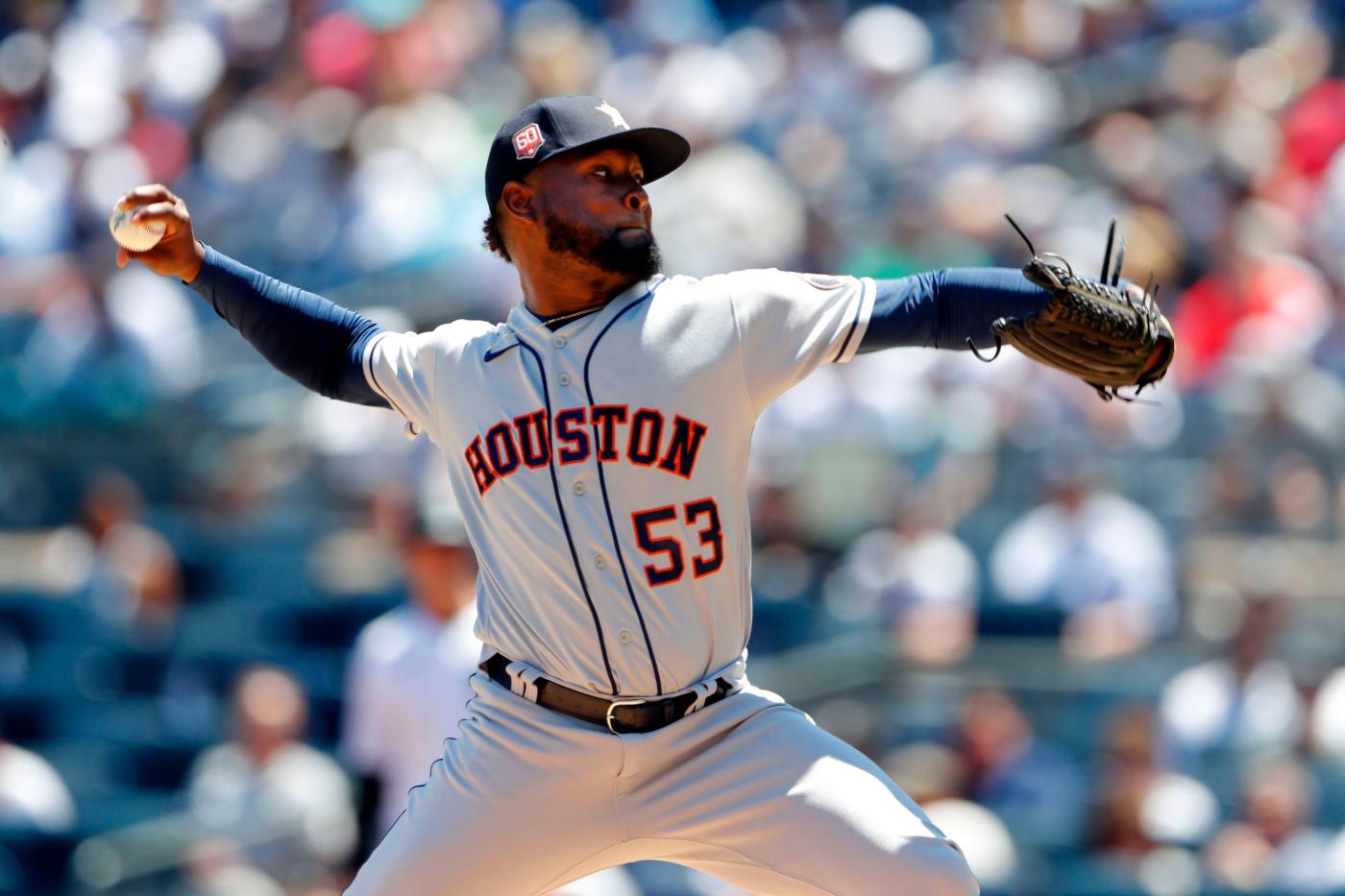 The 2022 Yankees, a galactic force, were brought back to this planet on Saturday. They didn’t just lose, they got no-hit, as Astros’ pitchers Cristian Javier, Hector Neris and Ryan Pressly turned in a historic performance, leading Houston to a 3-0 win in front of a stunned Yankee Stadium crowd.

This is the 14th no-hitter in Astros’ history and third time they’ve tag teamed one. It’s also the Astros’ second combined no-hitter at Yankee Stadium, joining a six-man effort on June 11, 2003. That day in 2003 was the last time the Yankees had been on the wrong end of a no-hitter.

Houston’s three pitchers allowed four base runners. Javier walked a guy, Neris walked two, and third baseman Alex Bregman committed a throwing error. They teamed up for 15 strikeouts, picking on Giancarlo Stanton for three of them.

The pitcher’s duel between Javier and Gerrit Cole went to Houston’s Javier, who threw seven no-hit, no-run innings with 13 strikeouts but was lifted after 115 pitches. Reliever Hector Neris walked two of the first three batters he faced before getting two tension-filled outs to bring the no-no into the ninth. Neris’ inning was by far the most nerve-wracking from a Houston perspective, as Pressly closed things with a 1-2-3 inning featuring two K’s.

Cole had his ace stuff as well, but rookie J.J. Matijevic (playing his seventh game in the big leagues) ambushed him for one of the most unlikely home runs of the season. Matijevic’s homer and bat flip were both extremely non-rookie-like, and his handiwork gave the Astros a 1-0 lead in the seventh inning.

Javier was popping the glove all day, mixing a mid-90s fastball with a curveball that dipped all the way down to 74 miles per hour. He threw enough strikes to continually get ahead, but not too many to where he became predictable or vulnerable to loud contact. His only walk came in the first inning to Josh Donaldson. After that, the 25-year-old Dominican retired 17 Yankees in a row before Donaldson reached on Bregman’s throwing error in the seventh. Javier gathered himself after the error with a brief mound visit from his infielders, a long contemplative stand behind the mound and a deep breath. Then came two strikeouts of Stanton and Gleyber Torres, taking the sun-baked crowd right back out of the game after the error briefly energized them.

Every hitter in the Yankees’ lineup looked hapless against Javier, but the six through nine hitters were particularly futile. Aaron Hicks, Jose Trevino, Marwin Gonzalez and Joey Gallo combined for five strikeouts in their eight plate appearances off Javier and only saw one three-ball count.

It’s time to talk about Gallo. The Yankees can’t move him any further down in the order, even if Gallo’s disposition says he’d love to move down, perhaps into the nearest underground chamber where nobody can watch him strike out any more.

Since hitting a home run in Toronto on June 17 (which came when the Yankees were already winning 10-3), Gallo is 0-for-17 with 10 strikeouts. His great defense is a minor saving grace, but when it comes in a corner outfield spot, it’s not nearly as important as his hitting, which has become nonexistent.

Gallo does not have any more minor league options, meaning the Yankees can’t just send him to Triple-A and bring up Miguel Andujar or Estevan Florial to take his spot. The only way out is through, whether that’s through busting his season-long slump or potentially through a transaction that ends with him on a different team.

On the flip side, the $324 million transaction the Yankees made for Gerrit Cole looks pretty dang good. Cole gave them seven innings on Saturday, striking out eight Astros and really only making one mistake, the fastball to Matijevic that leaked into the lefty’s down-and-in power zone. Despite a strong performance that kept his old team off the scoreboard for the first six innings, Cole was saddled with a tough luck loss.

Two losses in a row qualifies as noteworthy for these Yankees, who hadn’t dropped consecutive games since May 28 and 29. The last time they lost two straight home games was May 22 and 23, losses that are part of their only three-game losing streak of the season.