At training camp, Ravens QB Lamar Jackson’s contract status is notable. So is his participation. – The Mercury News 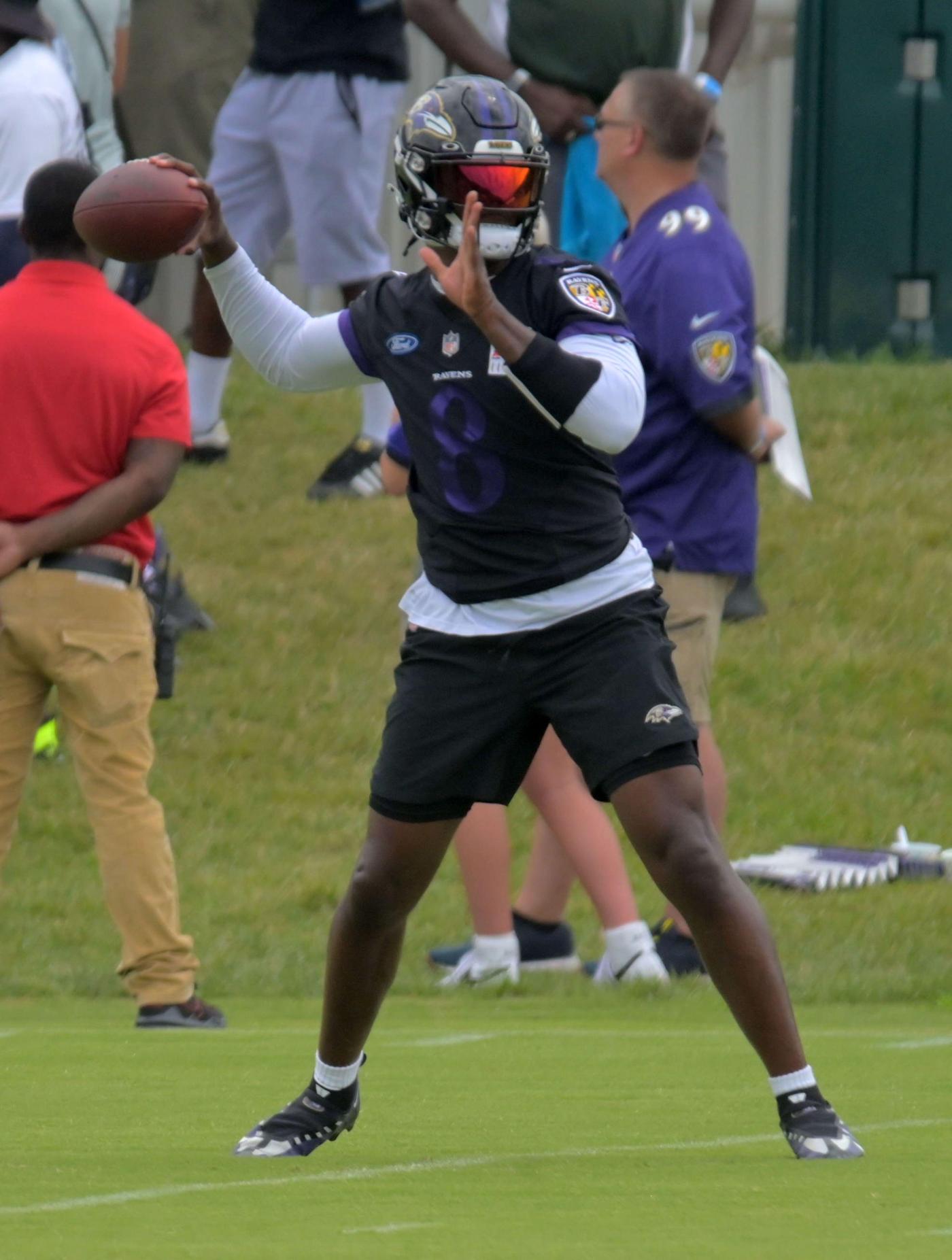 As Lamar Jackson and the Ravens continue their negotiations over the most important contract in franchise history, the star quarterback’s most important gesture of the process might’ve also been the simplest: He showed up for work Wednesday.

At the end of the Ravens’ mid-June mandatory minicamp, Jackson had seemingly left open the possibility of sitting out Week 1, and perhaps even training camp, if a contract extension hadn’t been agreed upon. “We’re having conversations about it,” he said. “I don’t know.”

But Jackson reported to Owings Mills last Thursday, led the Ravens’ offense in their first full-team practice of training camp Wednesday, and was upbeat and seemingly optimistic about the contract talks Thursday, his first news conference since minicamp.

Jackson, who’s representing himself and entering the final year of his rookie contract, was again vague about the specifics of the negotiations, which picked up in June. He declined to say whether it was important to get a fully guaranteed deal, as Cleveland Browns quarterback Deshaun Watson had from the Cleveland Browns. Ravens owner Steve Bisciotti had said in March that Watson’s five-year, $230 million contract was “groundbreaking, and it’ll make negotiations harder with others.”

Jackson also said there would be a “cut-off” at some point in the process, though he didn’t say exactly when, or how stalled negotiations might affect his availability this season. And he indicated that his contract talks with Ravens officials were limited to periods of “mutual free time,” a rarity during camp.

But asked whether he thought a deal would get done, Jackson said: “I think so. I think so. We’ll have to see.” Arizona Cardinals quarterback Kyler Murray’s recent five-year extension, worth $46.1 million annually, not only leaves Jackson’s contract situation as by far the NFL’s most intriguing but perhaps also provides a new starting point for the 2019 Most Valuable Player’s own megadeal.

“I get to talk to both sides, and both sides are very motivated to get the job done,” Ravens coach John Harbaugh said Thursday. “And so I feel like that’s kind of where it’s at. But you know, Lamar’s practicing all day. So it’s not like they’re going to be in some kind of negotiation all day, like they might be in a regular situation.”

Jackson’s strong performance through two days of camp — he had two more highlight-reel throws Thursday, to rookie tight end Isaiah Likely and wide receiver Rashod Bateman — is as notable as his participation.

“Hold-ins” have become the NFL’s latest leverage play, exploiting a loophole in the collective bargaining agreement that allows players who report to camp, but not necessarily participate, to avoid daily fines of $50,000. Some hold-ins will take part in individual drills, while some won’t even venture out onto the practice field. Their playbook is simple: The longer their absence, the more questions coaches and teammates get about their future, the greater the pressure becomes to get a deal done.

Steelers outside linebacker T.J. Watt, who sat out team drills through all of last year’s camp, signed a deal just before Pittsburgh’s self-imposed contract deadline that made him the NFL’s highest-paid defender. Seahawks safety Jamal Adams’ nearly three-week hold-in ended after Seattle made him the league’s highest-paid safety.

Those riches have seemingly inspired adherents. In camps across the country, contract disputes have led a handful of stars in Jackson’s position — Pro Bowl-level players entering the final year of their rookie deal — to hold in. Seattle Seahawks wide receiver D.K. Metcalf, San Francisco 49ers wide receiver Deebo Samuel and Los Angeles Chargers safety Derwin James all reported to camp but have yet to practice. (Metcalf reportedly agreed to a three-year, $72 million extension Thursday night.)

Jackson’s offseason hiatus was by now typical for him. As he trained back home in South Florida, adding muscle and throwing to local NFL receivers in a workout at Florida Atlantic University, anonymous critics around the league fixated on his perceived shortcomings.

In an ESPN poll of NFL executives, coaches, scouts and players, Jackson fell outside the top 10 in its quarterback rankings, behind the Cincinnati Bengals’ Joe Burrow and Cleveland’s Watson. In The Athletic’s own survey of executives and coaches, Jackson was rated the 10th-best quarterback, with one unnamed defensive coordinator saying: “If he has to pass to win the game, they ain’t winning the game. … I don’t [care] if he wins the league MVP 12 times, I don’t think he’ll ever be a [Tier] 1 as a quarterback.

“It’s anonymous, so I really don’t care,” said Jackson, who’s statistically one of the NFL’s most efficient passers in high-leverage, late-game scenarios. “He’s anonymous for a reason, you know? It’s all good. I’m good.”

“He’s used to it,” Harbaugh said Wednesday. “I mean, he’s been hearing the same thing since he was probably in junior high. I know he heard it in college; I know he heard it through the draft. I know he hears some of the same people saying the same things they said in the draft. That keeps coming up. I don’t know who this guy named ‘Anonymous’ is. I haven’t met him yet. So I don’t even know why we report on what he has to say. But it is what it is. It’s just baloney; it’s just nothing; it’s a big nothing burger.”

On Wednesday, Bateman was asked whether teammates ever bring up Jackson’s contract situation around him. Does the Ravens’ locker room talk about his future with as much interest as the NFL world at large?