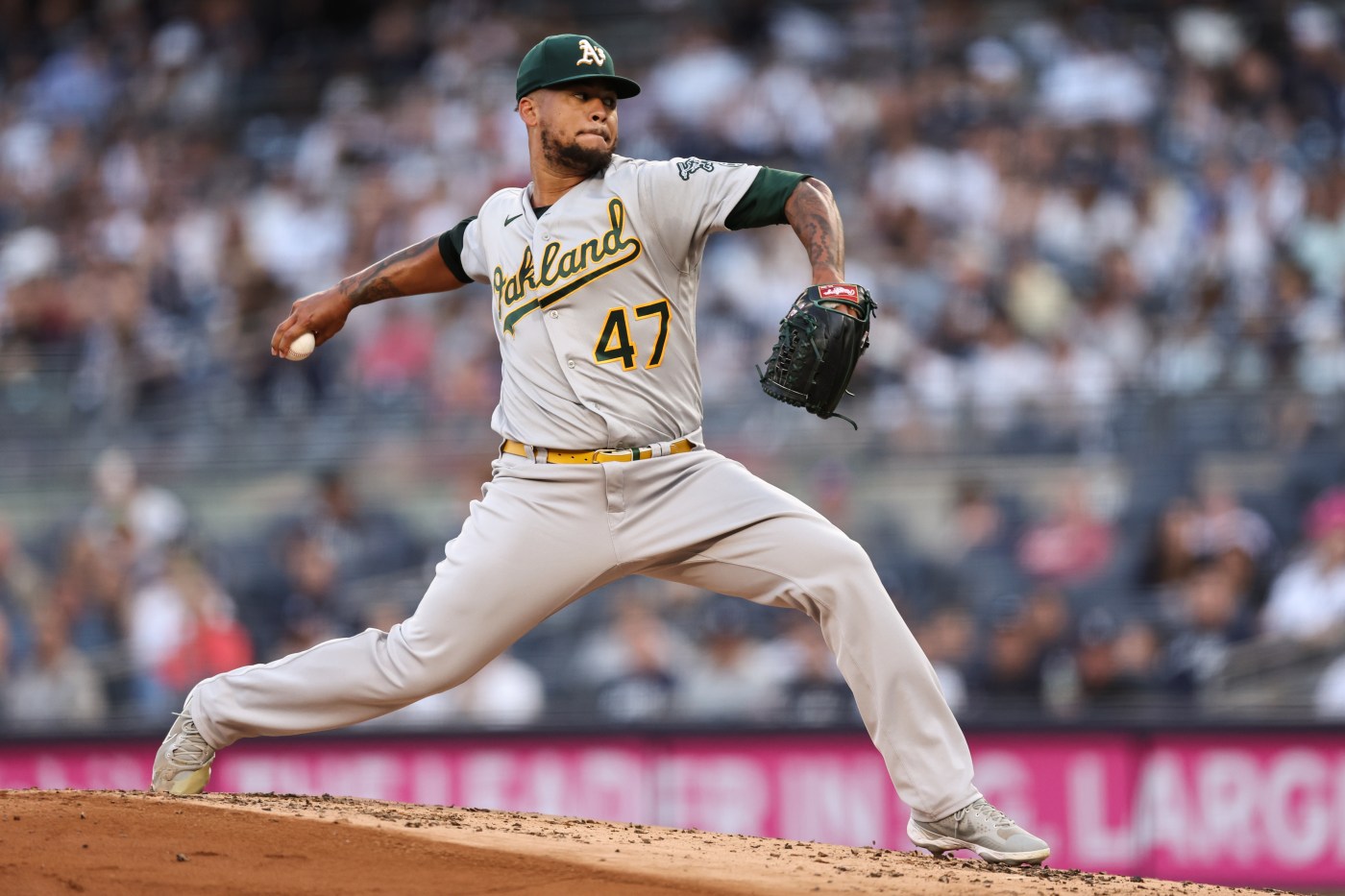 The bottom line continues to get worse for Frankie Montas, even if his value keeps going up.

Montas made his first-ever start for the Athletics at Yankee Stadium Tuesday night. He was very good, as he has been pretty much all season. Montas got no offensive support from his teammates, however, in a 2-1 loss that dropped his record to 3-9.

The Athletics are 25-51, and in the process of compiling the worst record in the majors have scored one run or fewer in 12 of Montas’ 16 starts and been shut out four times.

New York, 55-20 and one of several teams looking hard at Montas as a possible pennant-race acquisition, managed just four hits and two runs against him in six innings. Montas walked two, struck out seven and tied his season-high with 105 pitches. He walked two and struck out seven — including major league home run leader Aaron Judge three times. His best fastball topped out at 99.1 miles per hour.

Montas, 29, has a record that in no way reflects how he’s pitched. His earned run average was 3.20, he was fourth in the American League in innings pitched, sixth in strikeouts and his 16th start was the most in the majors.

Right-handers came in hitting just .226 against Montas, with lefties checking in at .224.

With a heavy two-seam fastball (sinker), a splitter and a slider, Montas at 6-foot-2, 255 pounds, is the kind of power arm teams will be looking at closely at the trading deadline on Aug. 2 or sooner.

Montas also is relatively affordable, making just over $5 million this season. He is arbitration eligible in 2023 and isn’t scheduled for unrestricted free agency until 2024.

In his 16 starts, Montas hasn’t pitched less than five innings in any of them and in his previous start on June 23 in Oakland against Seattle took a no-hitter into the eighth inning before giving up two hits. He left with a 1-0 lead only to have his bullpen give up two runs in the ninth.

Until Tuesday night, Montas had started against the Yankees just once — pitching seven innings in a 3-2 win last August in Oakland. Montas gave up no runs with one strikeout and six walks. He also pitched an inning in relief in Yankee Stadium in 2017.

The Yankees scored in the first inning against Montas on a run-scoring single to right by Jose Trevino, with Ramon Laureano throwing out trailing runner Josh Donaldson attempting to score with help from a short-hop tag from catcher Sean Murphy.

In the second, No. 9 hitter Marwin Gonzalez seized on a 3-1 pitch and drove it deep over t he fence in right field for his third home run and a 2-0 lead.

Starting pitcher J.P. Sears (3-0) went 5 2./3 innings for the Yankees, giving up no runs on three hits before giving way to Ron Marinaccio after surrendering a double to center by Nick Allen.

The Athletics didn’t get two runners on base in the same inning until the eighth, but Allen hit into a 4-6-3 double play against King to end the threat. .They rallied for a run in the ninth on an RBI single by Elvis Andrus after a two-out rally that began with Murphy reaching on a catcher’s interference. Stephen Vogt followed with a bloop single.

Holmes retired Tony Kemp on a ground ball for the final out with the tying run at second base.

Murphy had two catcher’s interference calls against him in the seventh inning Monday night.

— Domingo Acevedo and Sam Selman each pitched a scoreless inning for the Athletics in relief after Montas departed.

— Left-hander Cole Irvin, who like Montas has a subpar record (2-5) but a fine earned run average (3.29), starts for the A’s in Wednesday’s getaway day game against Yankees right-hander Jamison Taillon (8-1, 3.19).

The A’s then travel to Seattle for a four-game series before returning home to Oakland for a difficult six-game homestand against Toronto and Houston.