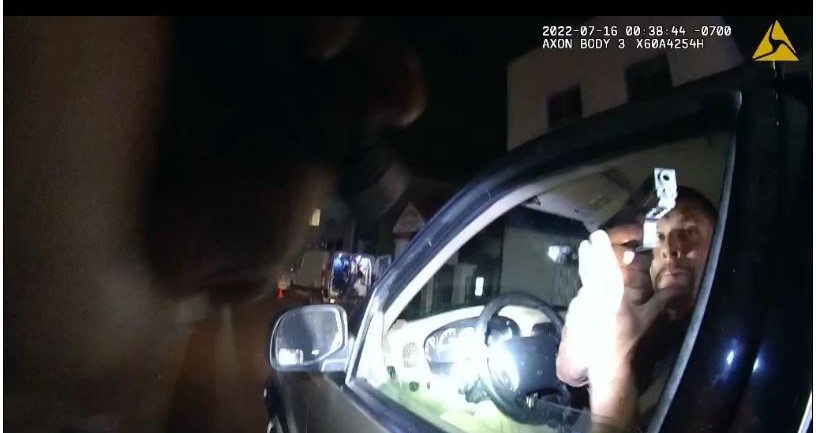 SAN JOSE — An East Bay man has been charged with attempted murder and assorted weapons crimes after authorities say he shot and wounded a Mountain View police officer during a traffic stop this past weekend, according to prosecutors and court documents.

Additionally, Choy was charged with misdemeanor counts of possessing a firearm while being the subject of a protective order, hit and run causing property damage, and destroying or concealing evidence. Records show that Choy has a previous attempted robbery conviction in Alameda County, and has a restraining order filed against him in that county. He was also the subject of an arrest warrant in Santa Clara County for a weapons violation and for failing to show up to a June 21 court date related to that violation.

Mountain View police had previously listed Choy as being 33 years old and a Stockton resident, but those descriptors were revised in a criminal complaint filed Wednesday by the Santa Clara County District Attorney’s Office.

According to a one-page investigative summary accompanying the complaint, the shooting was reported around 12:40 a.m. Saturday when a Mountain View officer was conducting a DUI enforcement shift and stopped the driver of a gold Ford Explorer SUV after seeing the vehicle run a stop sign near Villa and Hope streets then drive through a four-way intersection.

The officer was walking up to the driver’s side of the vehicle near Wild Cherry Lane and saw both of the windows of that side rolled down, then reportedly heard the sound of someone racking the slide of a handgun. Soon after, the officer saw the driver “lean forward and point a black colored semi-automatic handgun out of the driver window and directly towards him.”

That sight was corroborated by body-camera images released by police. The driver fired two rounds at the officer, who by that point had turned around and dove toward his patrol vehicle, police said.

The officer was hit in his left forearm, and a second round that hit him in the left shoulder was absorbed his by his bulletproof vest, police said. He was taken to a local hospital and was released a few hours later.

After the shooting, police said Choy drove away but traveled less than a mile before he crashed his vehicle near Higdon Avenue and ran away.

A regional search for Choy was launched, and the next day, an Alameda County Sheriff’s Office surveillance plane tracked Choy to a Black Bear Diner in Fremont. U.S. Marshals and Mountain View police detectives confronted Choy outside the diner, touching off a short foot chase that ended in Choy’s arrest.

Choy was booked into the Santa Clara County Main Jail, where he was being held without bail.

In the investigative summary, police stated that detectives obtained a search warrant for Choy’s vehicle and recovered a live 9mm round that matched the casings found at the crime scene. Choy’s involvement was formally confirmed by the officer — whose name has not been publicly released — and video recorded by his body camera.

Check back later for updates to this story.