Gothic glamour is the style of choice at the TV BAFTA Awards 2014 with Helena Bonham Carter, Sophie Ellis Bextor and Jodie Whittaker hitting the red carpet in dramatic black gowns

Only a few months ago, the stars of the big screen turned out to see who would win a coveted BAFTA film award, but now it’s the small screen’s stars turn to celebrate a year of ground-breaking television.

And on one of the hottest days of the year so far, the creme de la creme of the acting world descended on the Theatre Royal, Drury Lane, in London’s West End for the Arqiva TV BAFTA Awards 2014 and they certainly brought the glamour of Hollywood with them.

But it seems that Gothic was the fashionable theme on Sunday night, with Helena Bonham Carter, Sophie Ellis Bextor and Jodie Whittaker arriving in dramatically black outfits. 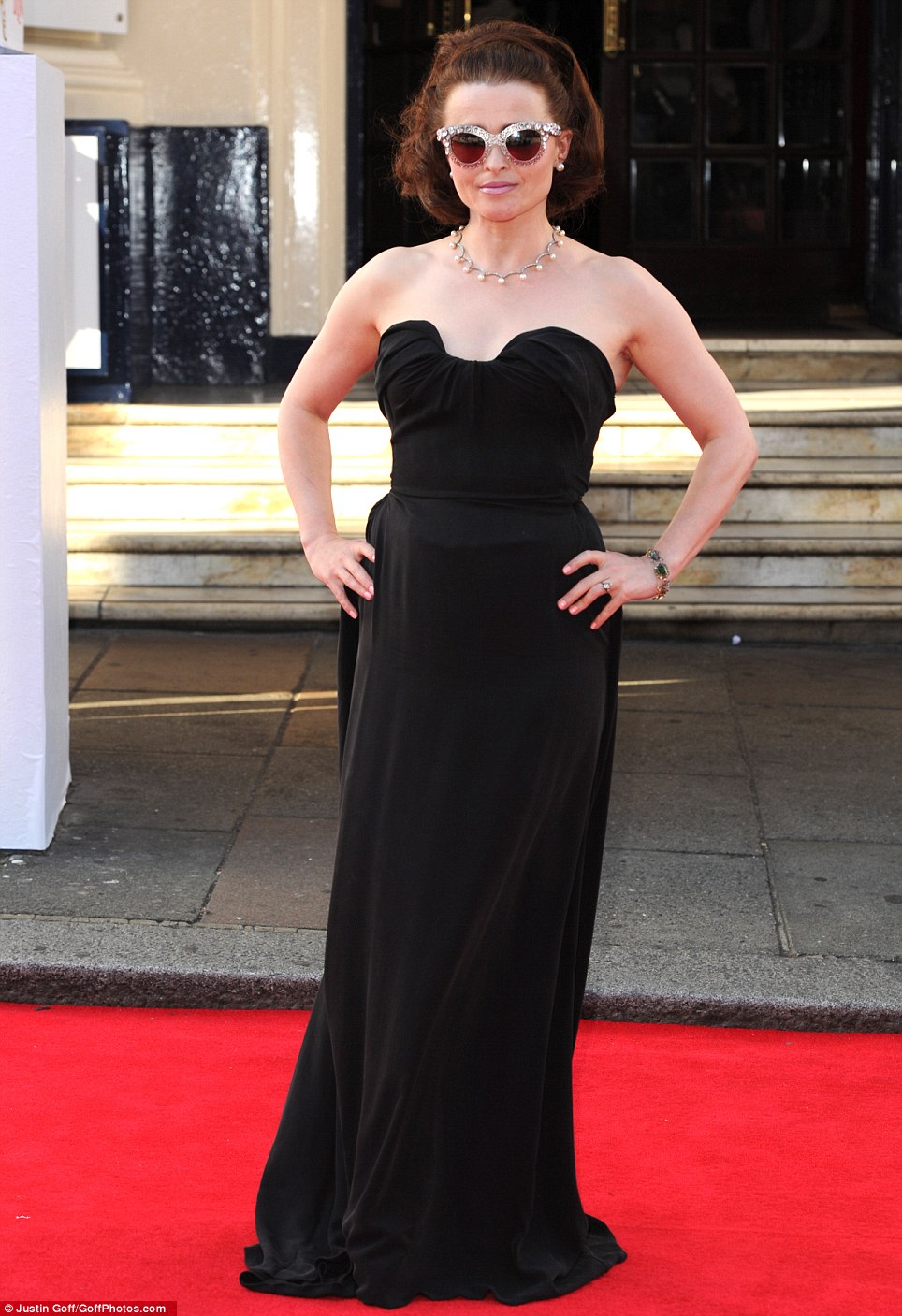 Welcome Ms Taylor: Helena Bonham Carter wore a black strapless dress and her style in a bouffant updo to make her look ever so much like the late Hollywood actress who she brought to life in the TV mini-series Burton And Taylor 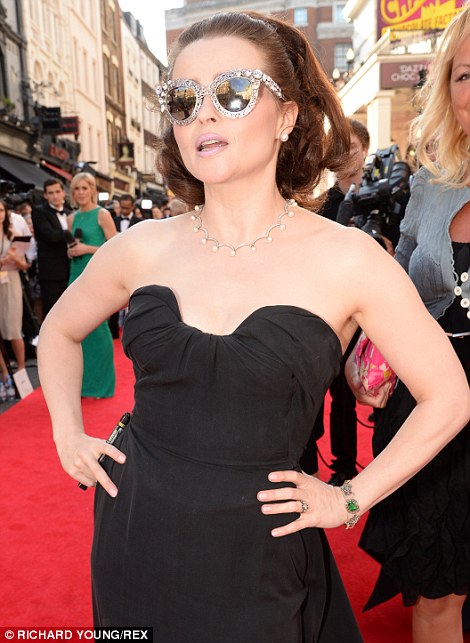 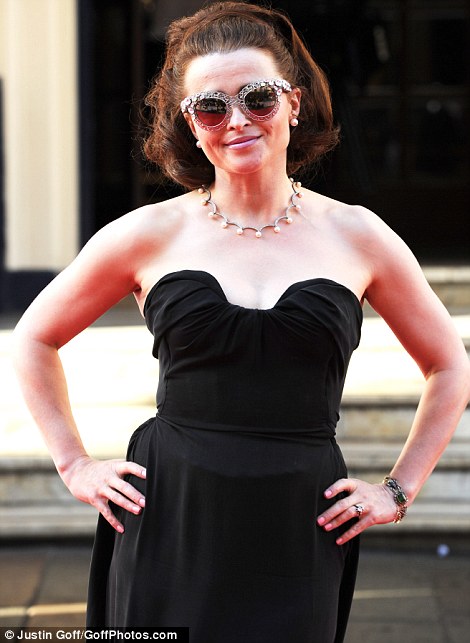 Old Hollywood: Helena wore a silver pair of vintage shades as she hit the red carpet at the TV BAFTAs on Sunday night 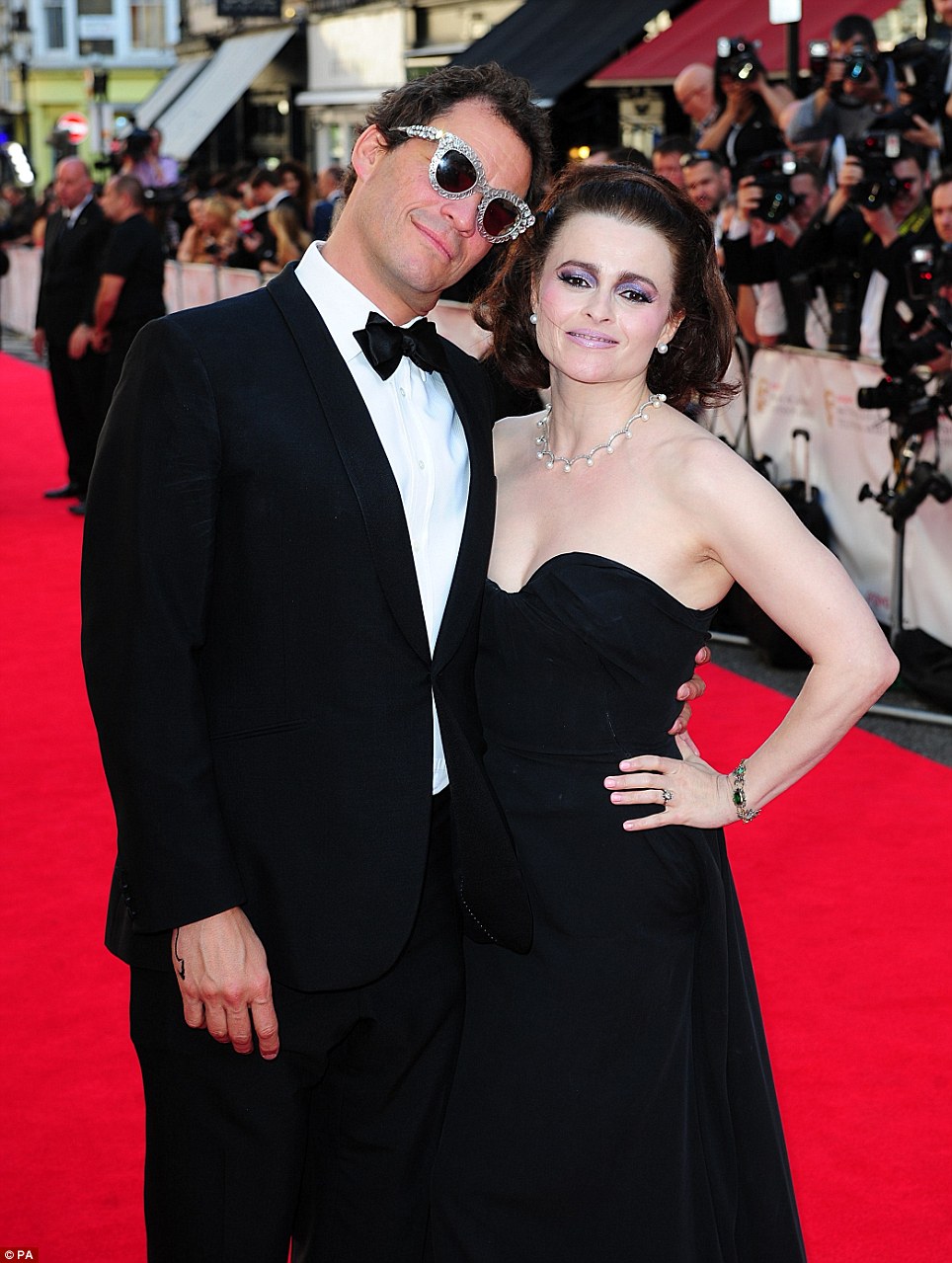 Burton and Taylor: Dominic West tries on his co-stars glasses for size while she reveals her purple make-up style 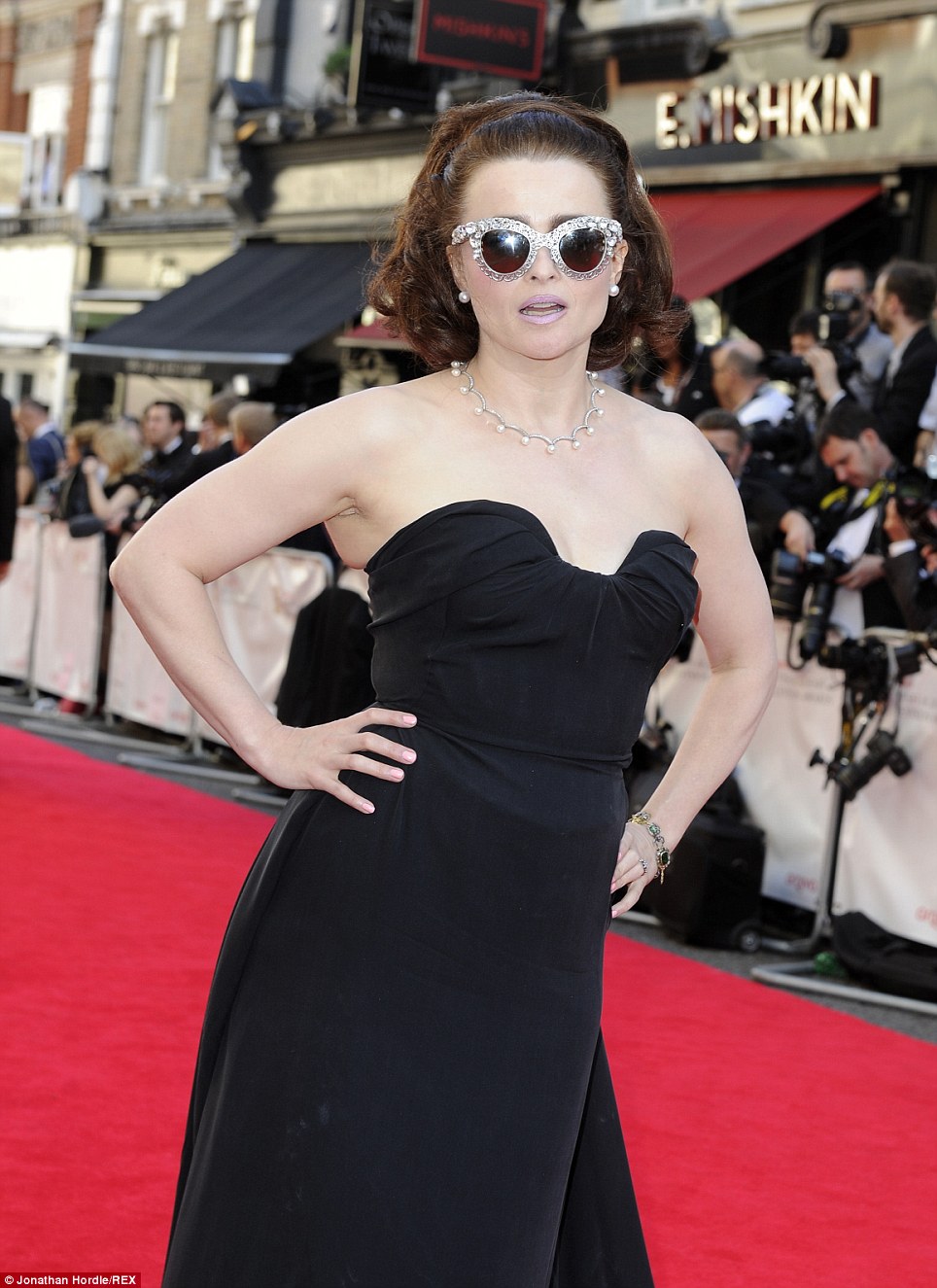 Glittering: Helena looked every inch a star as she posed in her diamond-encrusted sunglassess

Helena Bonham Carter arrived in a strapless heart gown with a heart-shaped neckline and vintage sunglasses to make her look ever so like Elizabeth Taylor, the late actress who Bonham Carter brought to life on the small screen – a role she is also nominated for.

The BAFTA-winning star styled her in a bouffant updo, another look that was very much of the style of Taylor during the sixties and seventies.

Sophie Ellise Bextor stunned in a black and sequinned slash neck gown and added a touch of pink lipstick to brighten her look, while piling her dark brown locks into a wavy updo. She was joined by her husband Richard Jones of The Feeling for the awards ceremony. 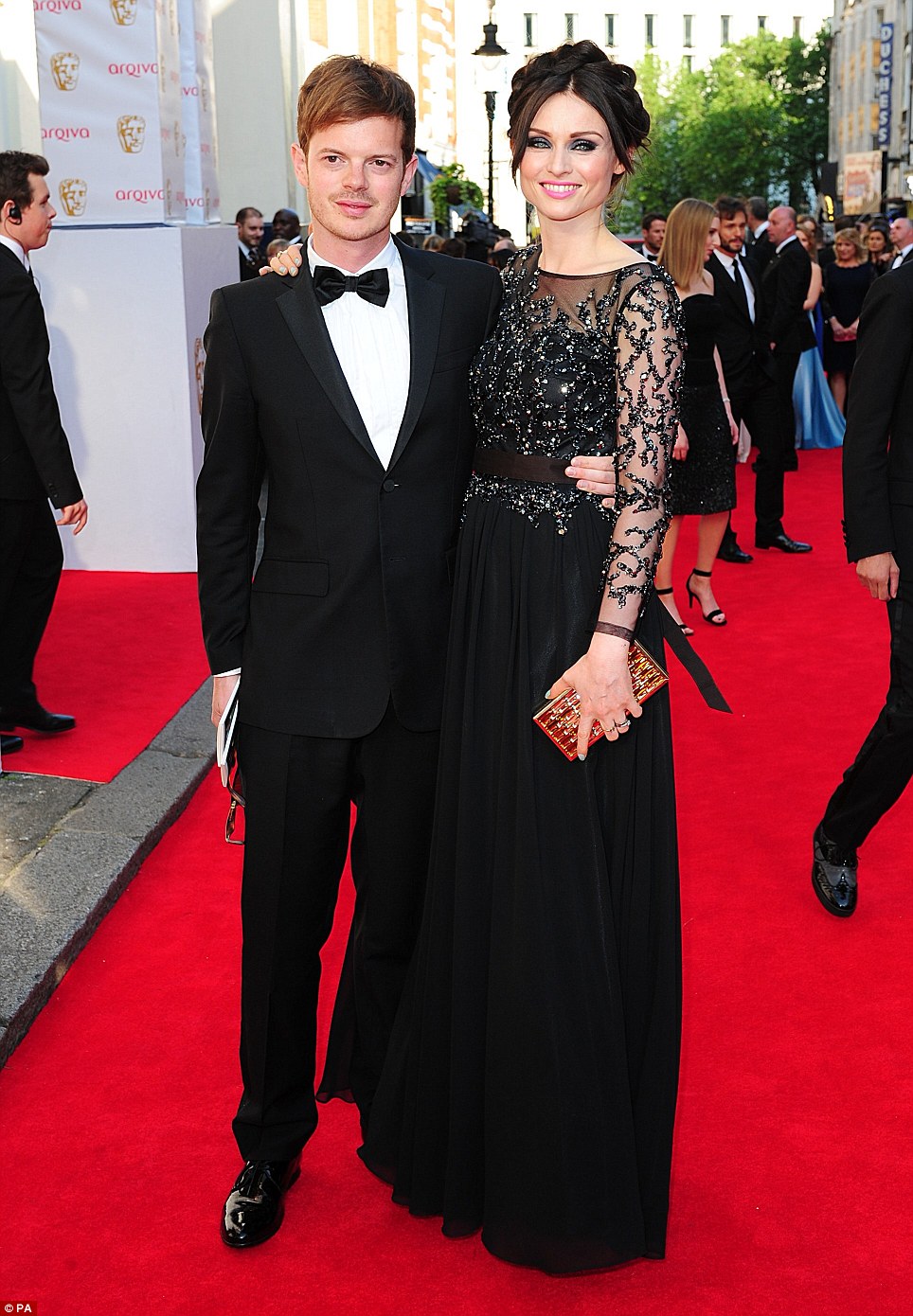 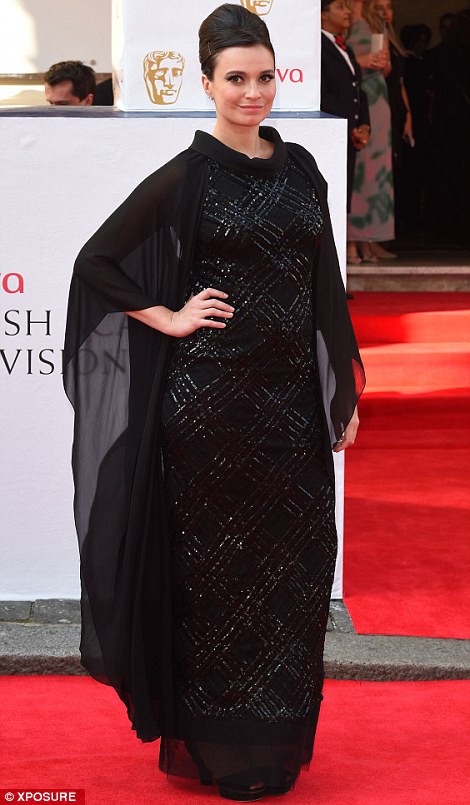 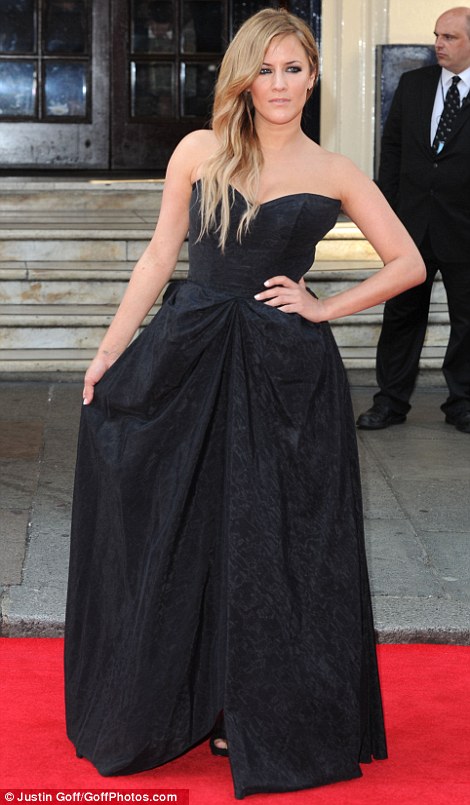 Sleek and chic: Davina McCall, Louise Redknapp and Samia Ghadie were also fans of black at the ceremony 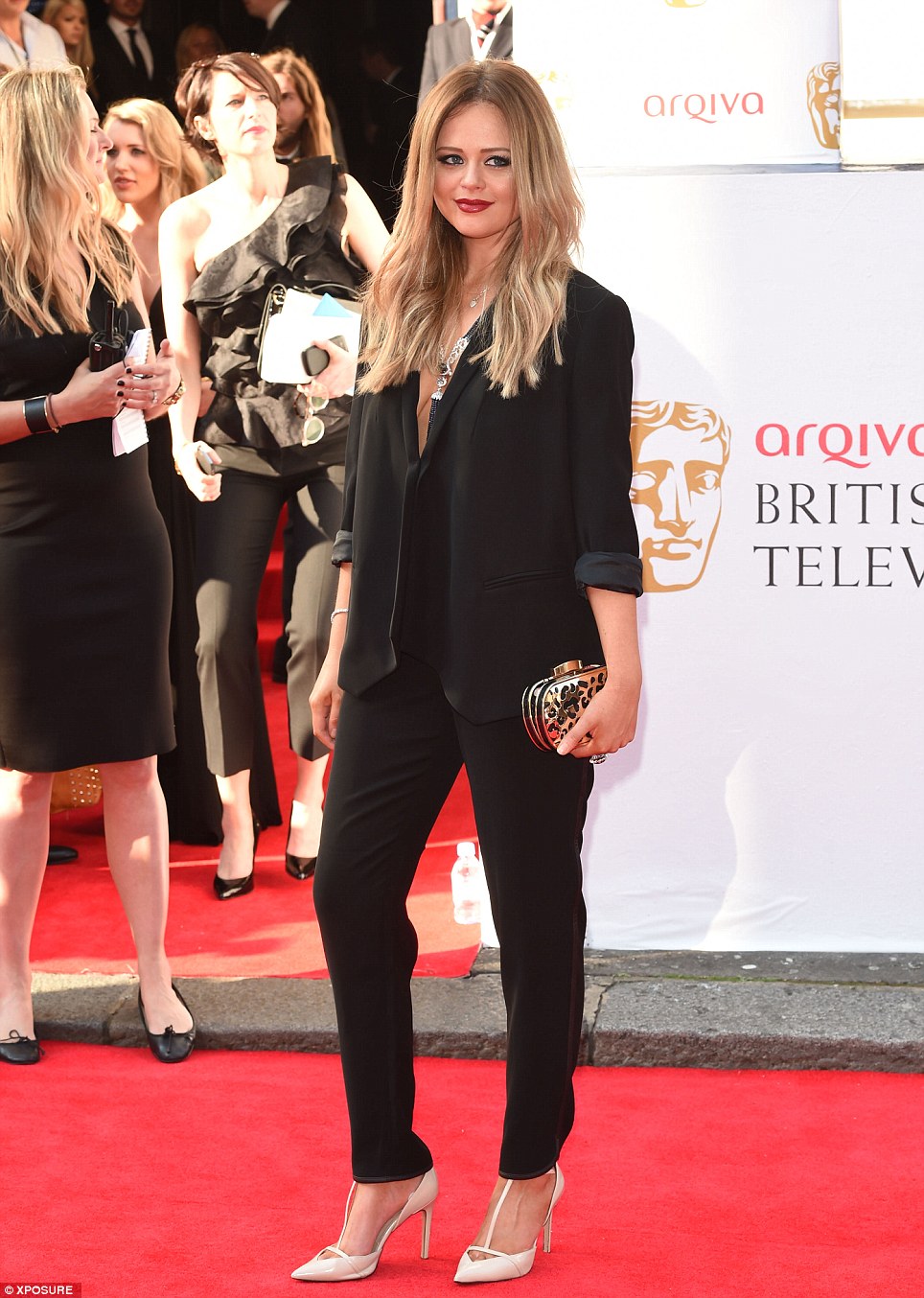 James Corden and his wife Julia Carey were stylishly in sync as were former Coronation Street co-stars Julie Hesmondhalgh and David Neilson, while Emily Atak bucked the trend by wearing a smart trouser suit.. but it was still in gothic black. She added Beauty Works Celebrity Choice Keratin Bonds shade #6/24 Honey Blonde to her hair to complete her modern look.

Claudia kept it simple in a burgundy and black strapless bodycon dress, and went against her usual lip style of wearing a nude colour by adding a touch of pink. However it seems her hair got a little windswept on the way there, but altogether the presenter looked chic and elegant. 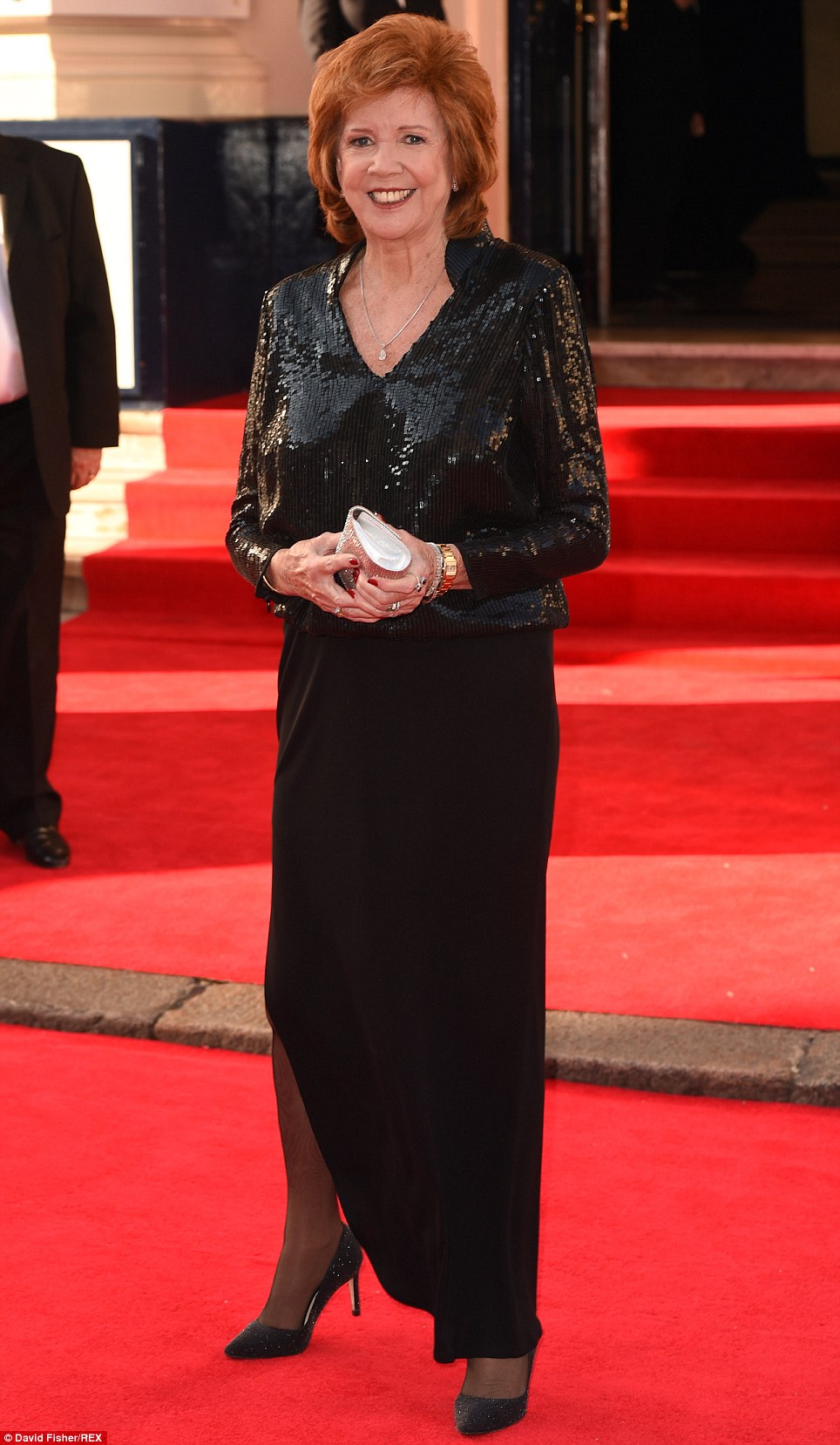 Surprise Surprise: Cilla Black wore a sequinned and velvet gown to the event, looking as glamorous as ever 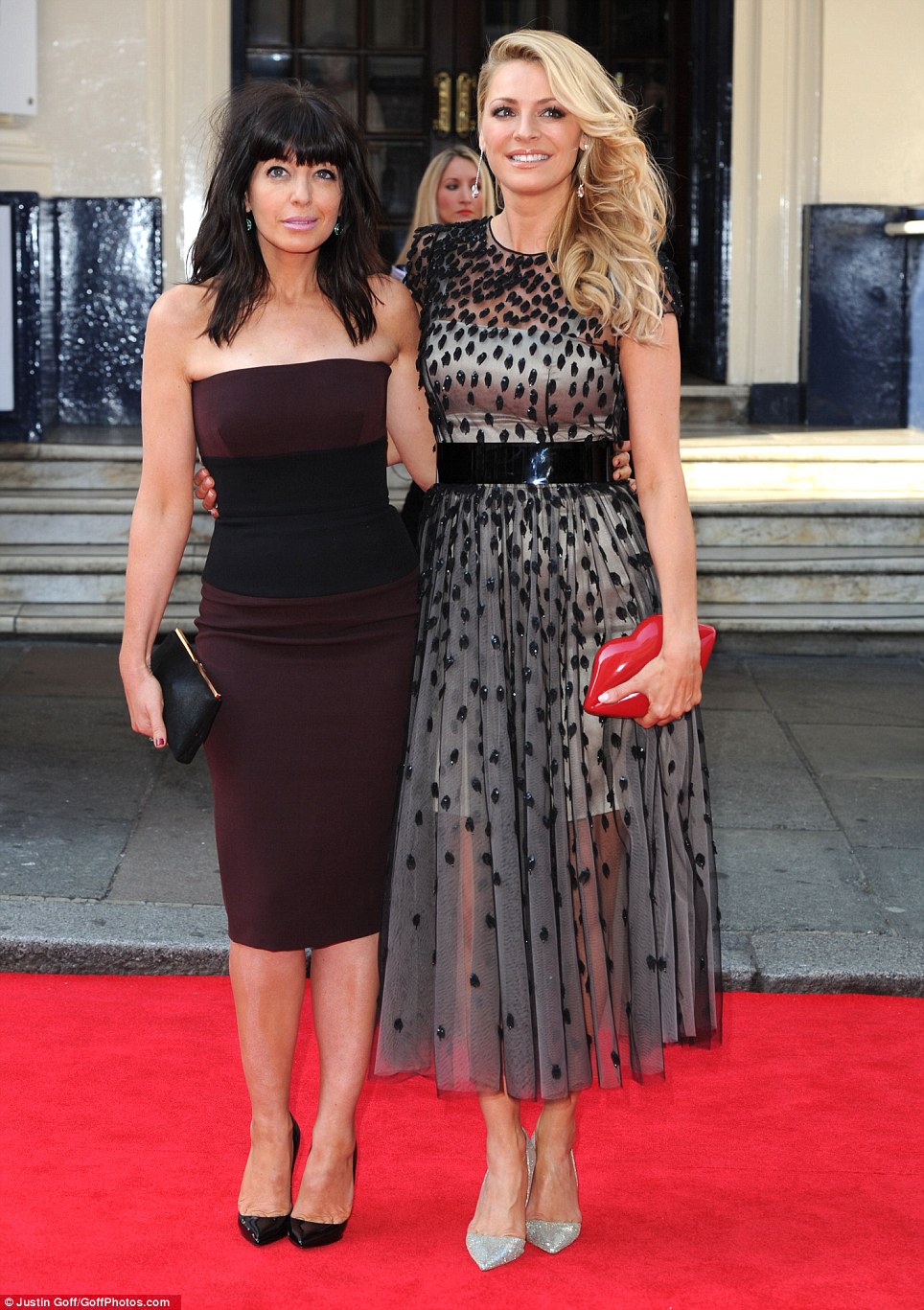 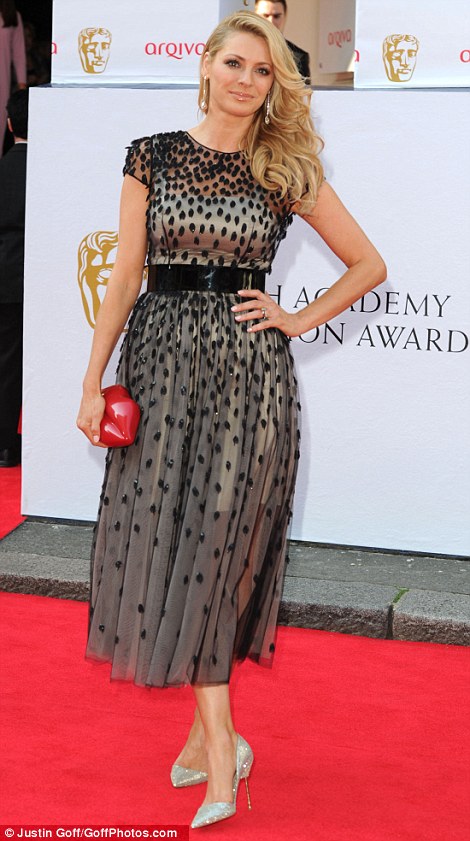 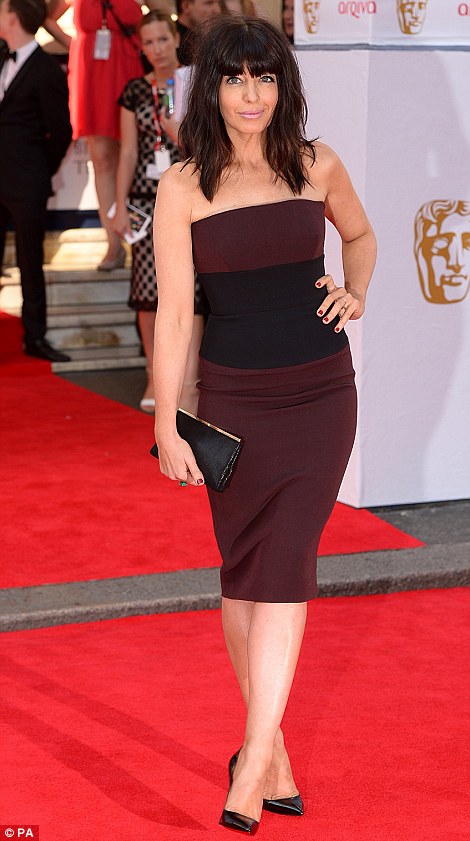 Winning looks: Tess and her new co-host will be hoping their show Strictly Come Dancing takes away Best Entertainment Programme 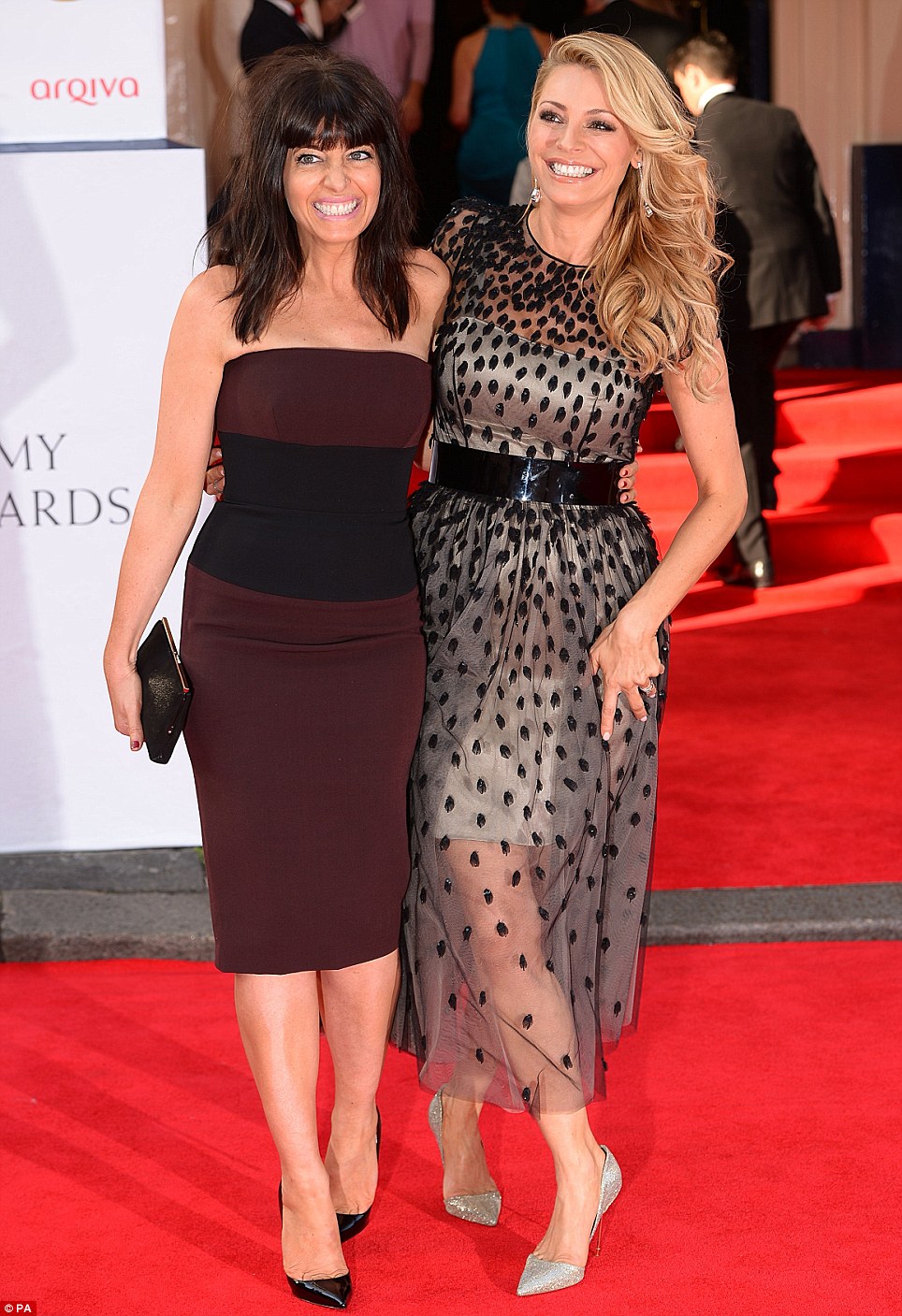 Chic looks: Claudia opted for a bodycon strapless dress in burgundy and black while Tess chose a black sequinned lace gown with a white underlay for the ceremony

Tess added more sparkle to her outfit with a pair of glittering silver shoes and carried a Lulu Guinness lip-shaped clutch bag in red. Her curled hair was styled into a side-parting which helped show off her drop earrings.

They will be hoping the production team for Strictly Come Dancing takes away a prize tonight as it is nominated in the category of Best Entertainment Programme.

Game Of Thrones star Sophie Turner was amongst the first arrivals and took to the res carpet in a strapless floor-length gown featuring a black and blue floral pattern against an off-white background. The young actress carried a snakeskin box clutch and wore her long red hair in loose waves. 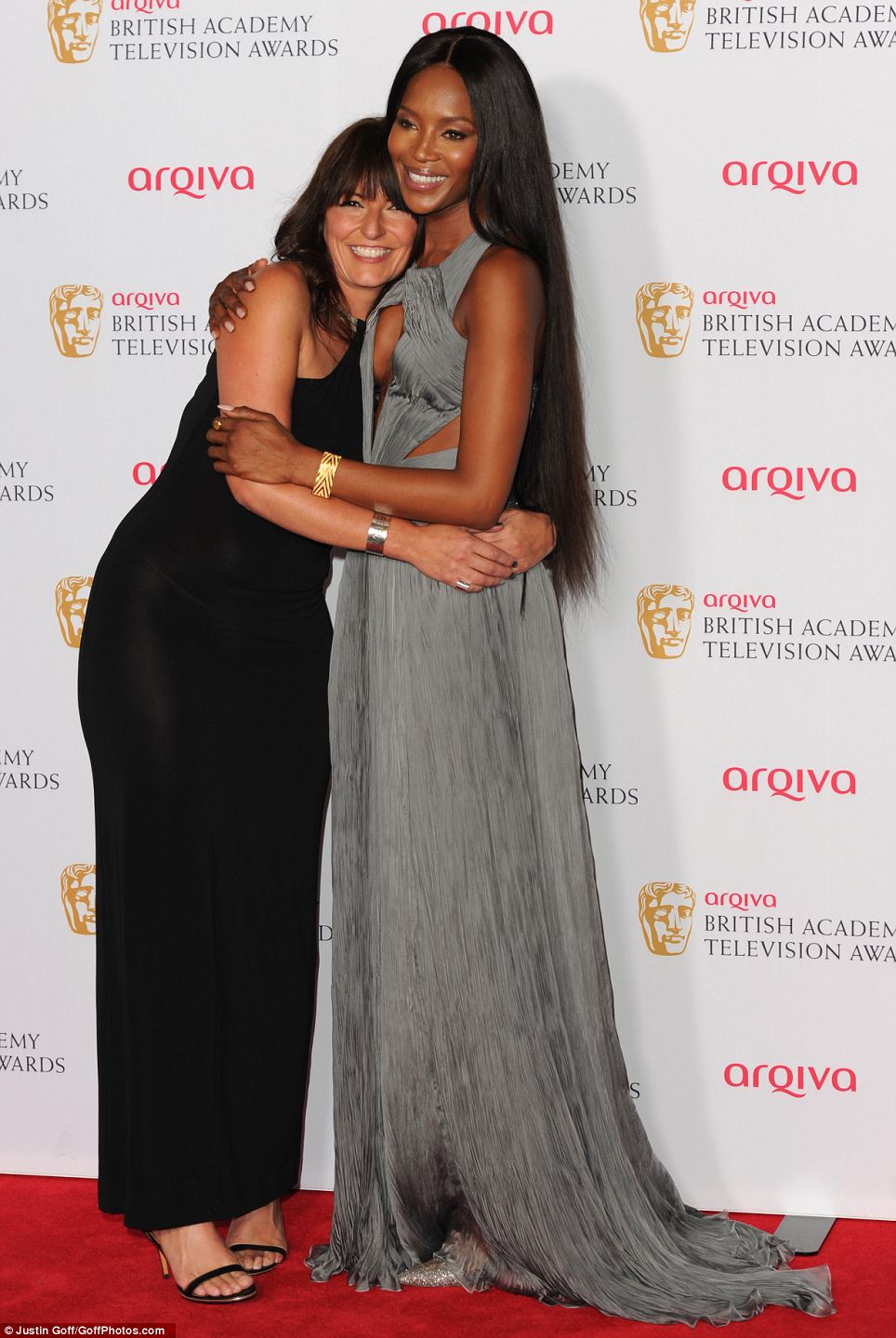 Affectionate: Naomi Campbell and Davina McCall share a warm embrace as they pose at the awards

Ophelia Lovibond brought some summer brightness, in a vibrant pink brocade dress featuring a high neck and a full skirt. The Guardians Of The Galaxy star wore her brunette hair in a chic updo, and like Tess, carried a Lulu Guiness lip-shaped bag but in silver and wore Monica Vinader jewellery.

The nominations for this year’s TV BAFTA Awards were announced last month, with Dominic West and Helena Bonham Carter’s portrayal of Richard Burton and Elizabeth Taylor’s tempestuous relationship up for a prize. 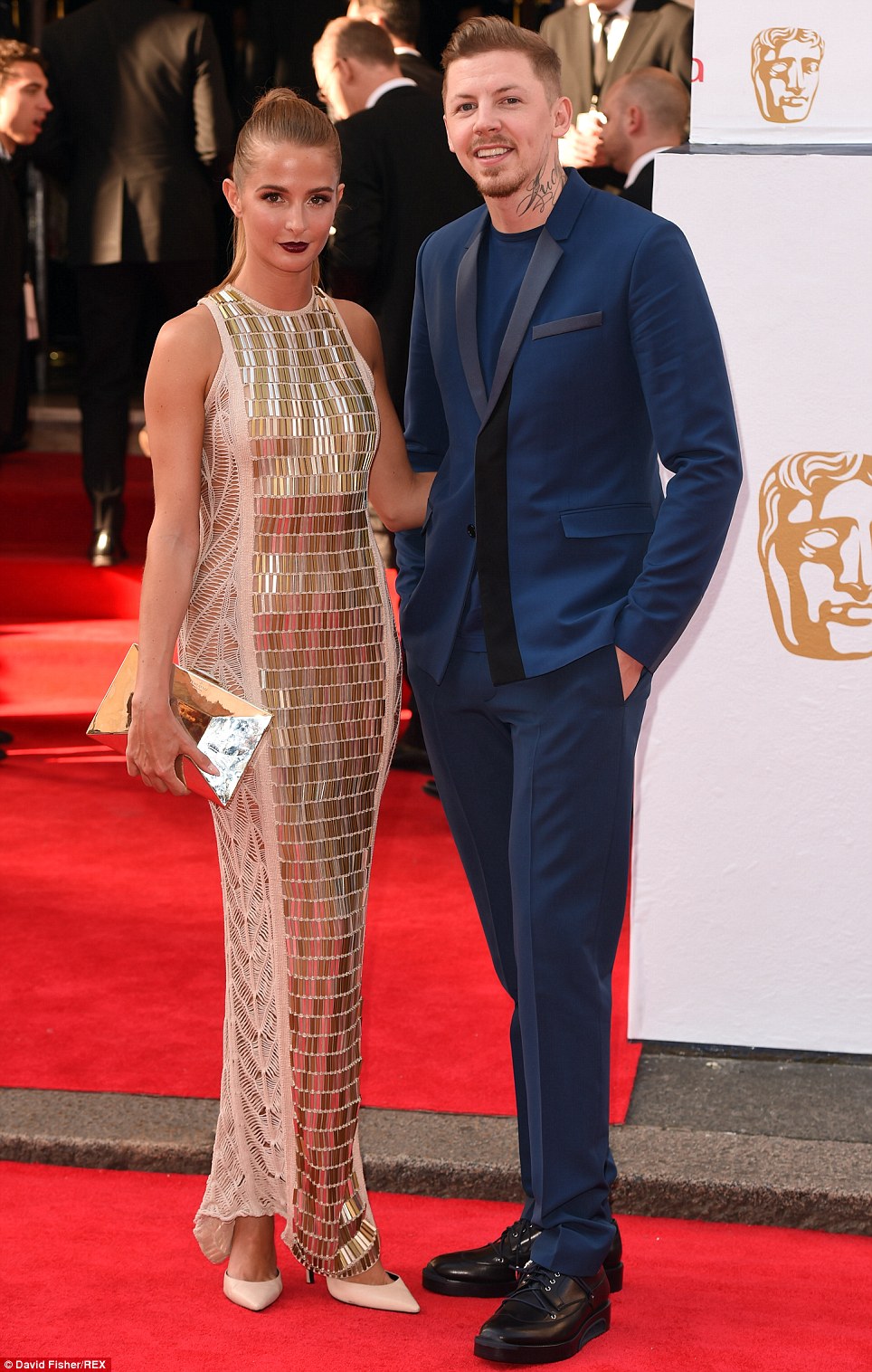 Fashion forward: Millie Mackintosh looked like an award herself in her gold knitted Julien Macdonald dress and carried a Kate Spade New York clutch while husband Professor Green stuck to black and blue

The pair, who appeared in a BBC drama based on the couple’s life, are in the running for the leading actor and actress awards at the annual event after nominations were announced on Monday.

They face competition from big names including Jamie Dornan and Olivia Colman who was one of the stars of last year’s awards.

Colman, nominated for Broadchurch, is also up against Kerrie Hayes from The Mill and Maxine Peake from The Village for the leading actress award.

Dornan is nominated for his role as the twisted killer in BBC2’s The Fall, alongside Luke Newberry from zombie thriller In The Flesh. 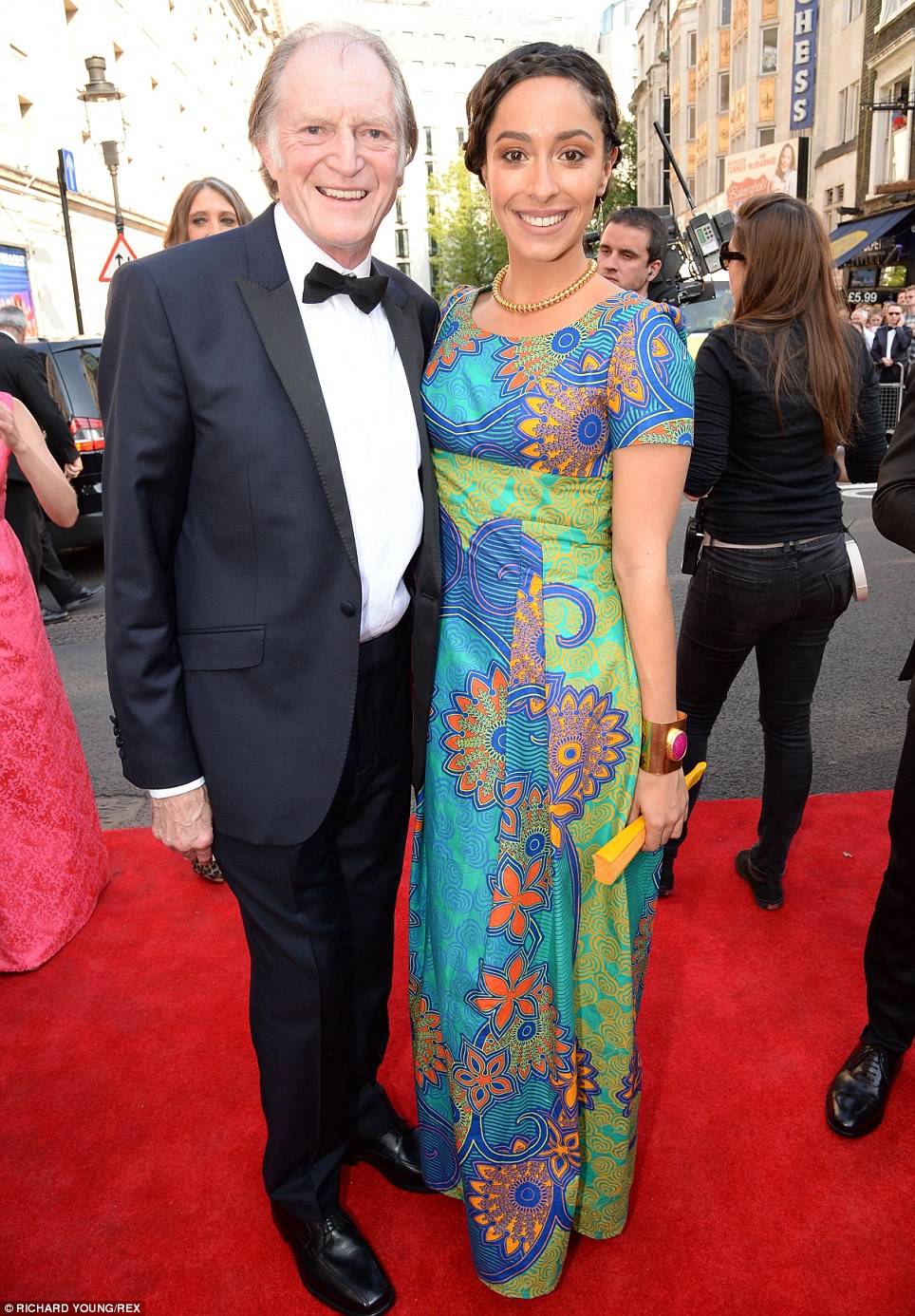 They’ve made up! Game Of Thrones stars David Bradley and Oona Chaplin on the TV BAFTA red carpet but last time they were on screen together his character Walder Frey arranged for the murder of her pregnant character Talisa Stark at the infamous Red Wedding

Channel 4 drama Southcliffe, about the aftermath of a series of shootings in a small town, triumphed with a leading actor nomination for Sean Harris and supporting actor and actress nods for fellow cast members Rory Kinnear and Shirley Henderson.

The show is also in the running in the mini-series category.

Broadchurch’s David Bradley is nominated for supporting actor, with Ripper Street’s Jerome Flynn and Nico Mirallegro from The Village completing the shortlist.

Henderson faces competition from Claire Rushbrook for My Mad Fat Diary in the supporting actress category with nods for on-screen sisters Sarah Lancashire and Nicola Walker from Last Tango In Halifax. 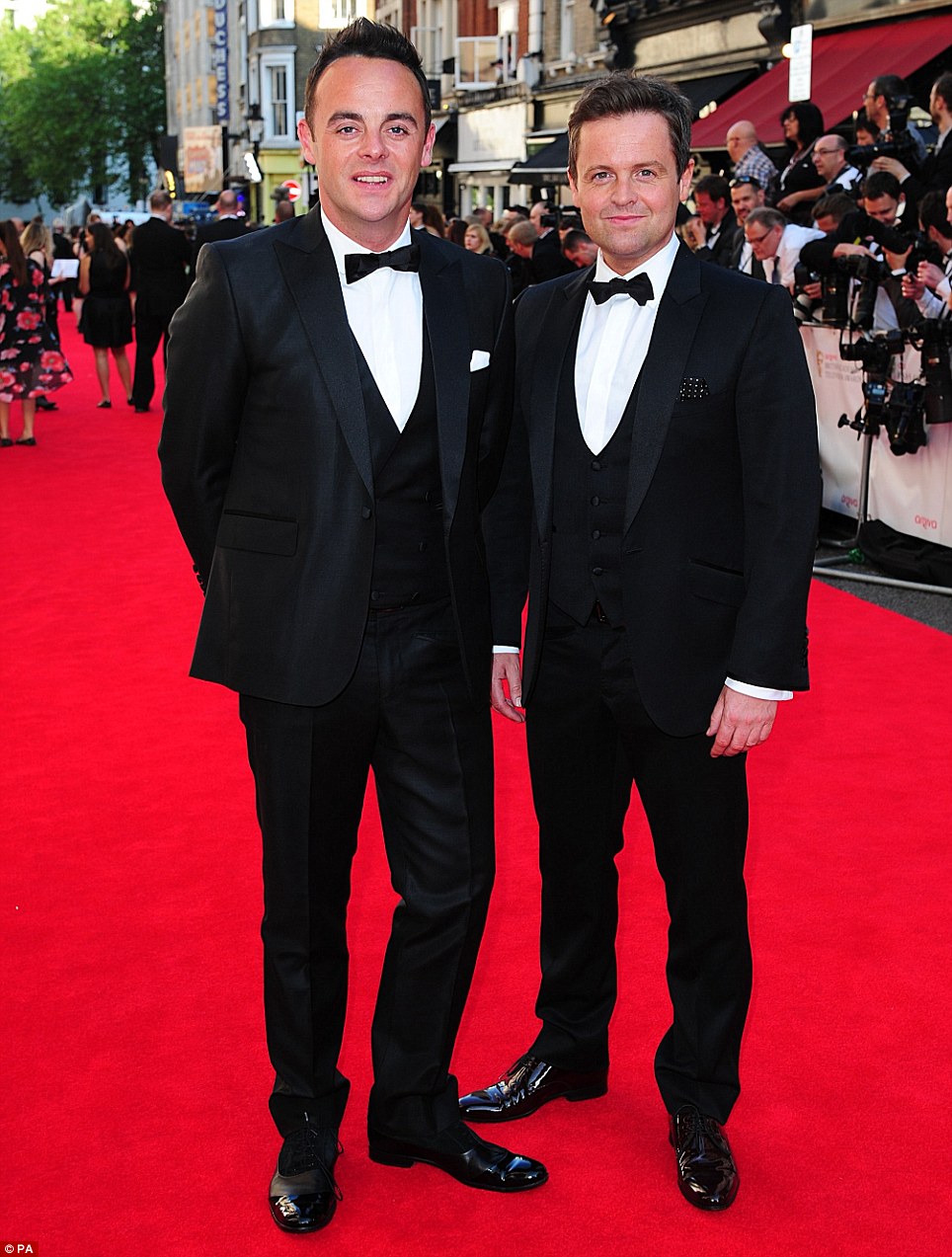 Sunday night taakeway: Ant & Dec arrived together in smart suits and are up for an award

It is a tale of two shows in the tussle to be named best male performance in a comedy with The IT Crowd’s Richard Ayoade and Chris O’Dowd up against Matthew Baynton and James Corden from The Wrong Mans.

Veteran star Frances De La Tour’s role in Vicious sees her nominated for female performance in a comedy alongside The IT Crowd’s Katherine Parkinson, Doon MacKichan for Plebs and Kerry Howard for Him And Her: The Wedding.

The latter is also nominated in the situation comedy category along with Count Arthur Strong, Toast Of London and The IT Crowd.

Joining Southcliffe in the mini-series category are The Great Train Robbery, The Fall and In The Flesh. 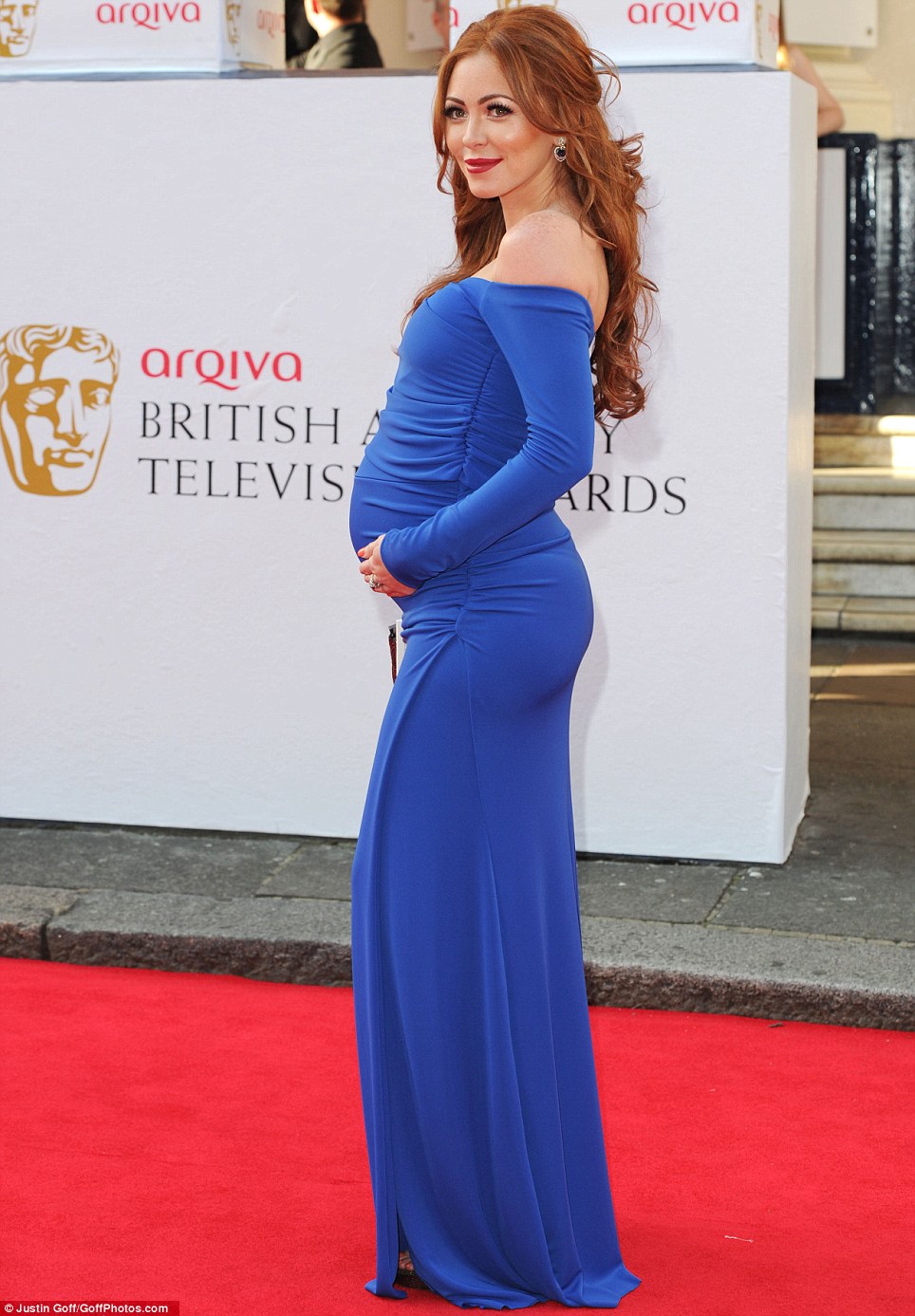 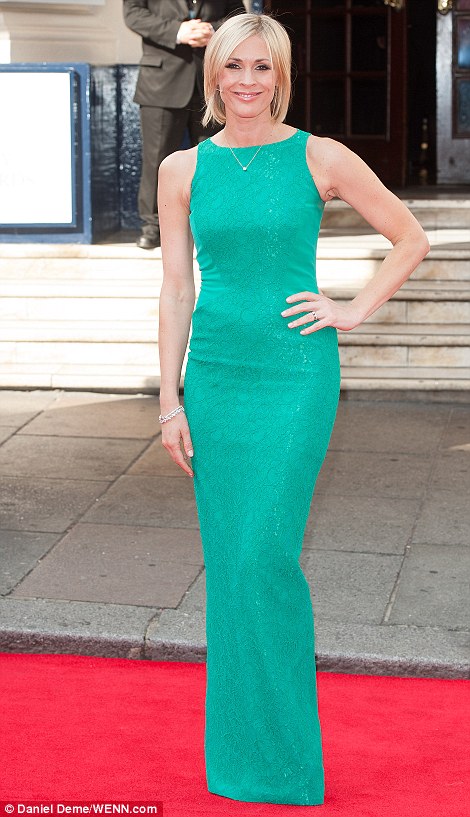 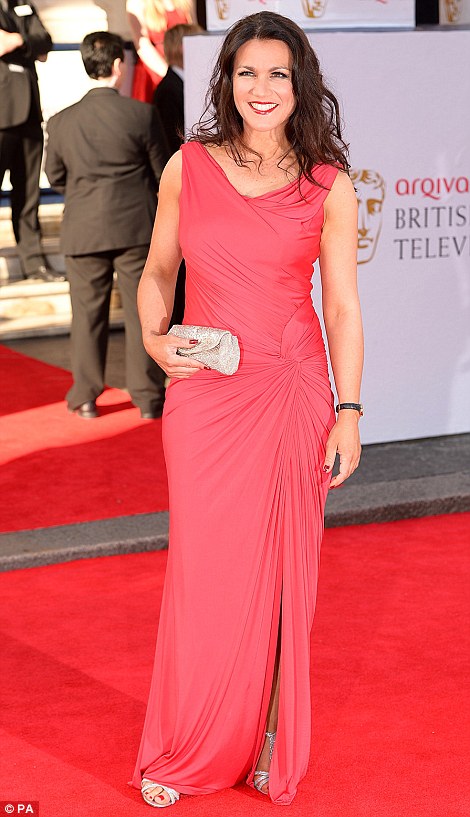 Bright and bold: Presenters Jenni Falconer and Susanna Reid stepped out in colourful dresses of green and salmon pink 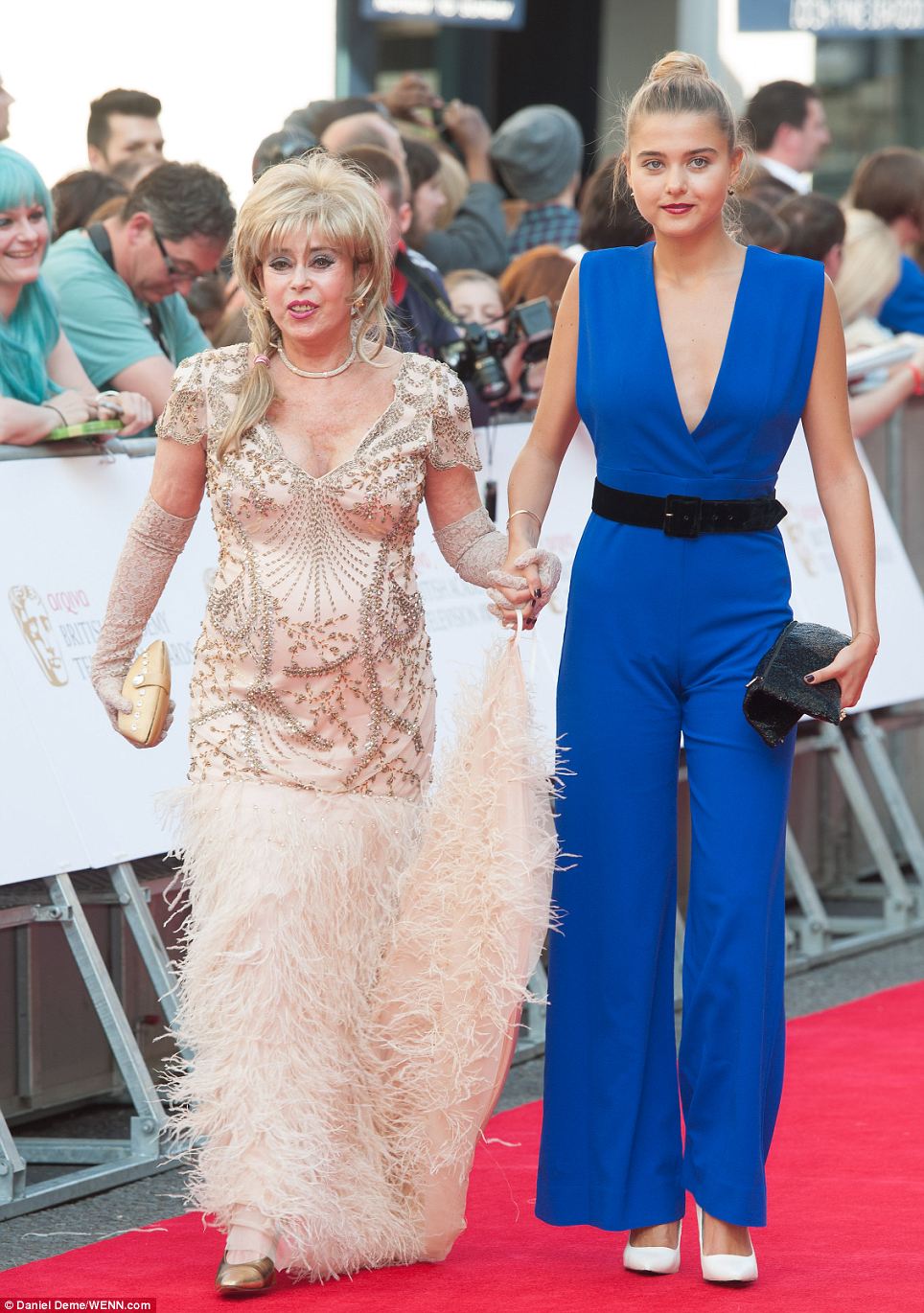 The nominations for best single drama are Black Mirror: Be Right Back, Complicit, The Wipers Times and the Doctor Who anniversary drama An Adventure In Space And Time.

The event’s host, Graham Norton, is nominated for entertainment performance for his chat show and is up against Sarah Millican, Charlie Brooker and Geordie duo Ant and Dec.

The Graham Norton Show is also nominated in the comedy and comedy entertainment programme category along with A League of Their Own, Would I Lie To You? and last year’s winner The Revolution Will Be Televised. 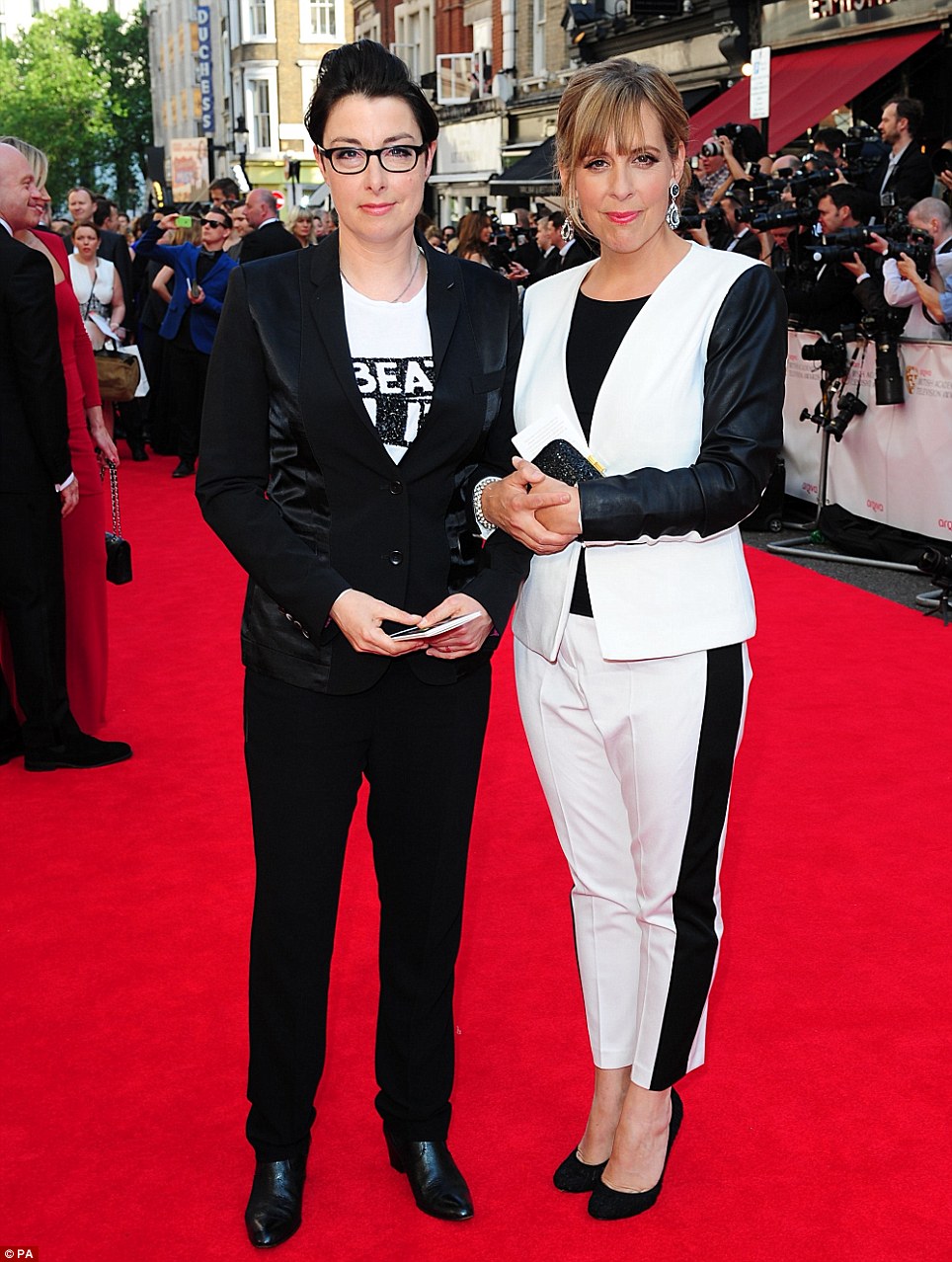 French supernatural drama The Returned is up against Danish political thriller Borgen, cult US show Breaking Bad and the remake of House Of Cards for the international award. 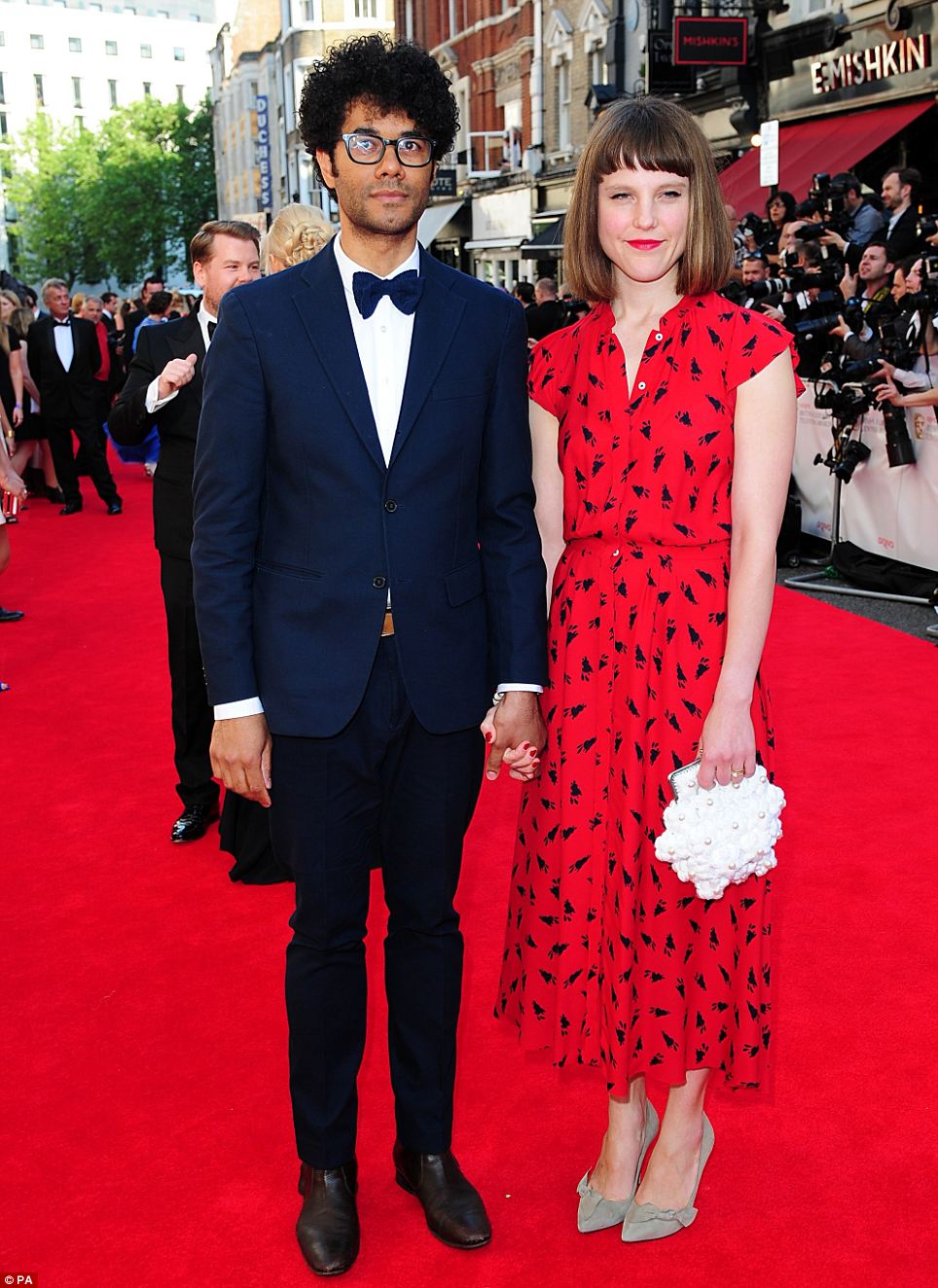 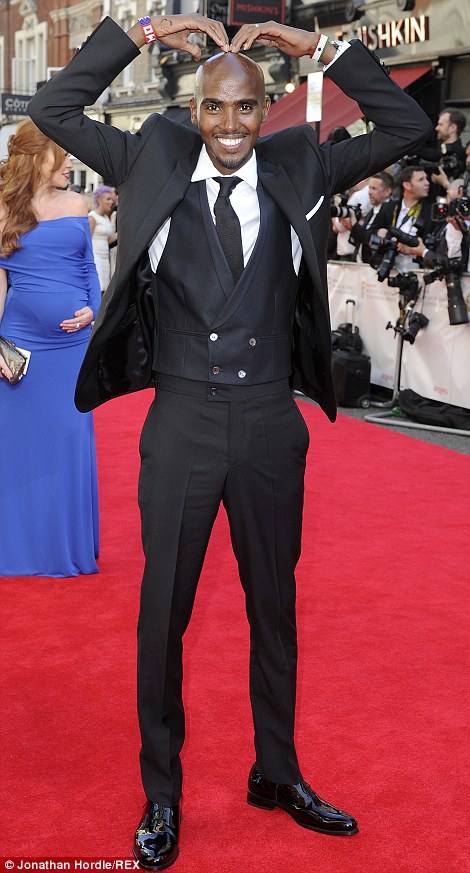 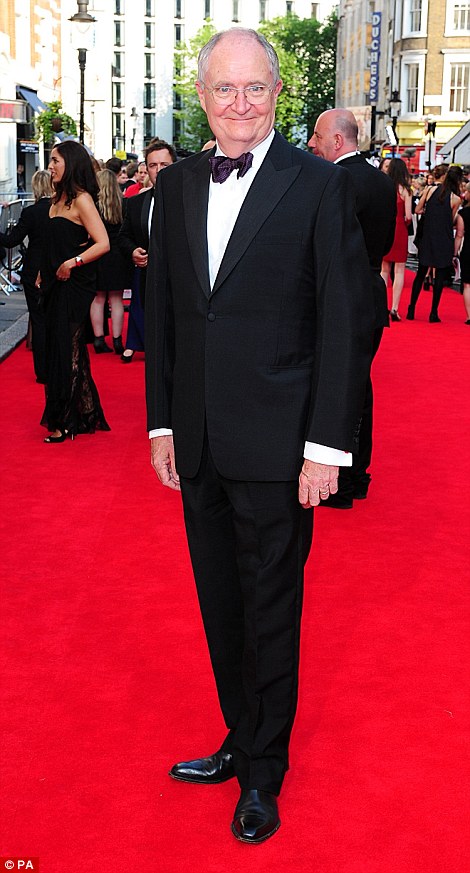 Doing the Mo-bot! Mo Farah cheekily posed with his trademark M as he arrived in his black three-piece suit while Jim Broadbent opted for a black tuxedo and deep purple bow-tie 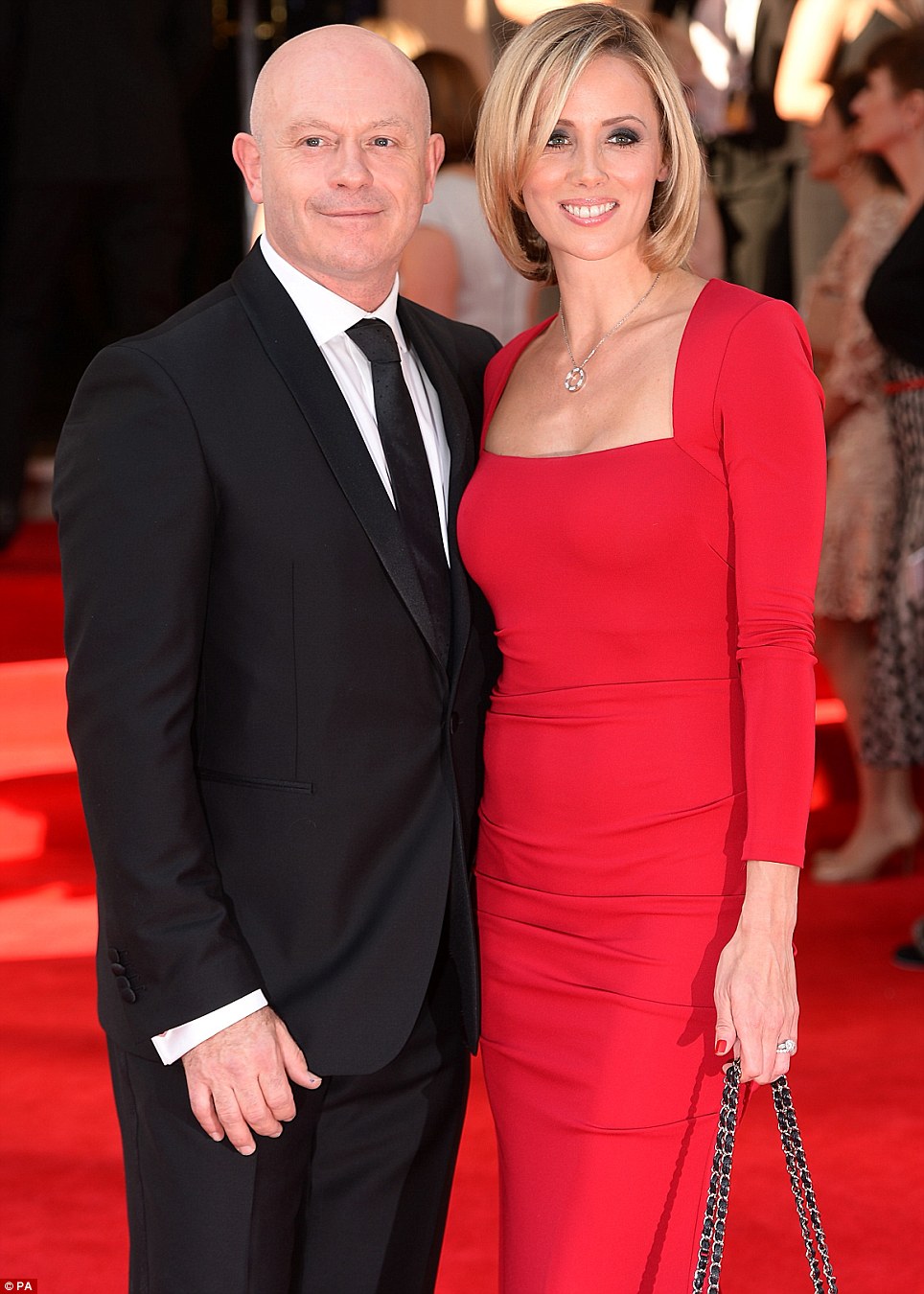 Blending in: Ross Kemp looked dapper in black as he posed with his wife Renee O’Brien, who wowed in a long-sleeved red dress

ITV’s hit Gogglebox is in the running for the reality and constructed factual award with The Big Reunion, Dragons’ Den and The Undateables.

The show is also in the running for the Radio Times Audience Award, which is voted for by the public.

It faces competition from Breaking Bad, Broadchurch, Doctor Who: The Day Of The Doctor, Educating Yorkshire and The Great British Bake Off.

This year’s awards will be handed out during a ceremony at the Theatre Royal, Drury Lane, in London’s West End on Sunday May 18.

FEMALE PERFORMANCE IN A COMEDY PROGRAMME

The IT Crowd – Channel 4

MALE PERFORMANCE IN A COMEDY PROGRAMME

The IT Crowd – Channel 4

Kudos and Imaginary Friends (a co-production)/ITV

A LEAGUE OF THEIR OWN

HIM & HER: THE WEDDING

RADIO TIMES AUDIENCE AWARD (voted for by members of the public)

DOCTOR WHO: DAY OF THE DOCTOR