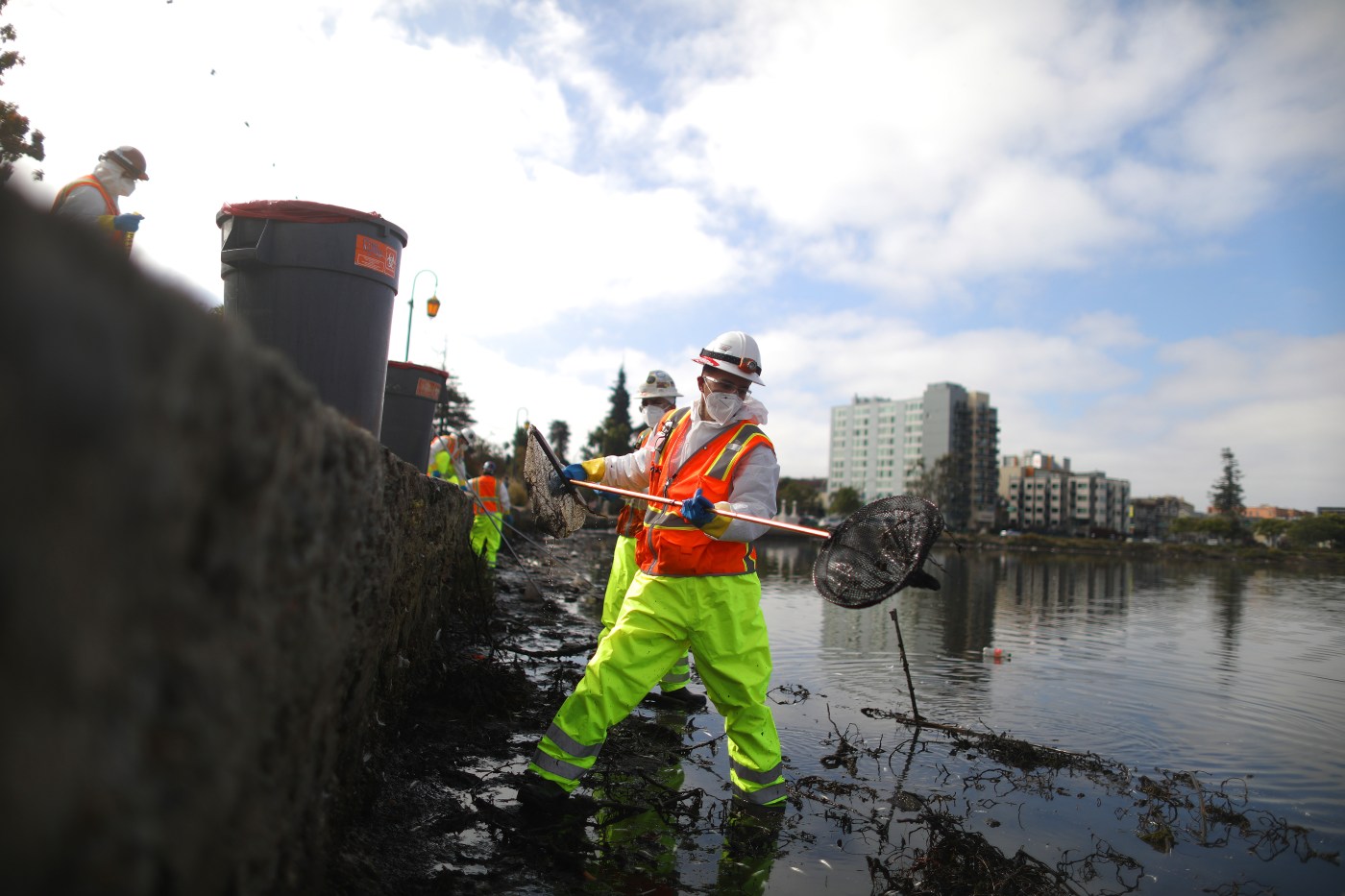 Crews this week were working to remove thousands of dead fish, clams and other animals from Lake Merritt ahead of a punishing heat wave that threatened to exacerbate the smell from thousands of decaying carcasses in the water.

About 1,200 pounds of dead fish were removed from the shores of the popular Oakland waterway Wednesday after the mass die-off over the last week. Their work, which was expected to continue Thursday, was prompted by one of San Francisco Bay’s largest toxic algae blooms in recent memory.

The heat that began Thursday — expected to topple high-temperature records by early next week — threatened to re-energize the outbreak of algae believed responsible for the die-off. Still, experts expressed cautious optimism that the outbreak may be receding.

“I’d like to think the worst is behind us, but we don’t know,” said Eileen White, executive officer of the San Francisco Bay Regional Water Quality Control Board. “It’s in Mother Nature’s hands at this point, and we’re in uncharted territory.”

The so-called “red tide” began when a specific type of phytoplankton, called heterosigma akashiwo — a species that has long been found in and around San Francisco Bay — started multiplying to unprecedented levels earlier this year. The first signs of trouble came as early as May 2022, when officials from Oakland Public Works and the water board first detected “low levels of contaminants associated with harmful algae blooms,” according to a release by Oakland Public Works.

Broader signs of an outbreak, however, don’t appear to have emerged until late July.

The organisms can flourish in nutrient-rich waters, Kudela said, particularly during the same sunny, hot weather that has visited the Bay Area in recent months. It’s particularly dangerous for fish, because it produces multiple substances — including at least one neurotoxin — that can affect fish gills. However, its toxins don’t typically spread beyond a fish’s gills, meaning that the rest of the fish is generally safe for other animals to eat.

Kudela said that it’s difficult to attribute a specific algae bloom to climate change, but scientists are increasingly seeing the types of conditions in which algae blooms thrive, including hotter weather and droughts that can reduce runoff from the nearby river deltas.

“It’s sort of the combination of these favorable factors, and all of those are being driven by climate change,” Kudela said.

The first signs of an ensuing fish kill came late last week, when carcasses began washing ashore near Oakland and Alameda. Since then, thousands of dead fish have been found across the Bay, including sardines, striped bass, sturgeon, sharks and bat rays.

The California Department of Fish and Wildlife was working to quantify the extent of the die-off, though no figures had been released as of Thursday morning.

Recently, the bloom “seems to have basically crashed and receded, particularly in the South Bay,” said UC Santa Cruz ocean sciences Professor Raphael Kudela, who cited satellite imagery from the NOAA National Centers for Coastal Ocean Science. Where once the bloom covered almost all of the San Francisco Bay, the algae now appears concentrated near Sears Point to the north, and Coyote Hills Regional Park to the south.

Kudela said receding levels of algae offered both good and bad news for fish in the Bay. While lower levels of algae make it less likely that marine life could be fatally poisoned by the tiny phytoplankton, challenges could remain for fish as the algae disappear.

Bacteria eating away at the algae often causes dissolved oxygen levels in the water to plummet — potentially suffocating fish, particularly those living near the bottom of the Bay. Already, in some parts of the South Bay, for instance, oxygen levels have dropped to 10% of normal, Kudela said. Sturgeon and bat rays could be among the species most affected.

Once algae blooms begin to recede, they don’t often double-back and begin spreading once again. But that isn’t always the case, and officials were still trying to nail down exactly why this type of phytoplankton began spreading to such high levels in the first place.

“It’s probably more likely that if it’s going away, it’ll just keep going away,” Kudela said. “But there’s no saying, since we don’t know why it started in the first place.”