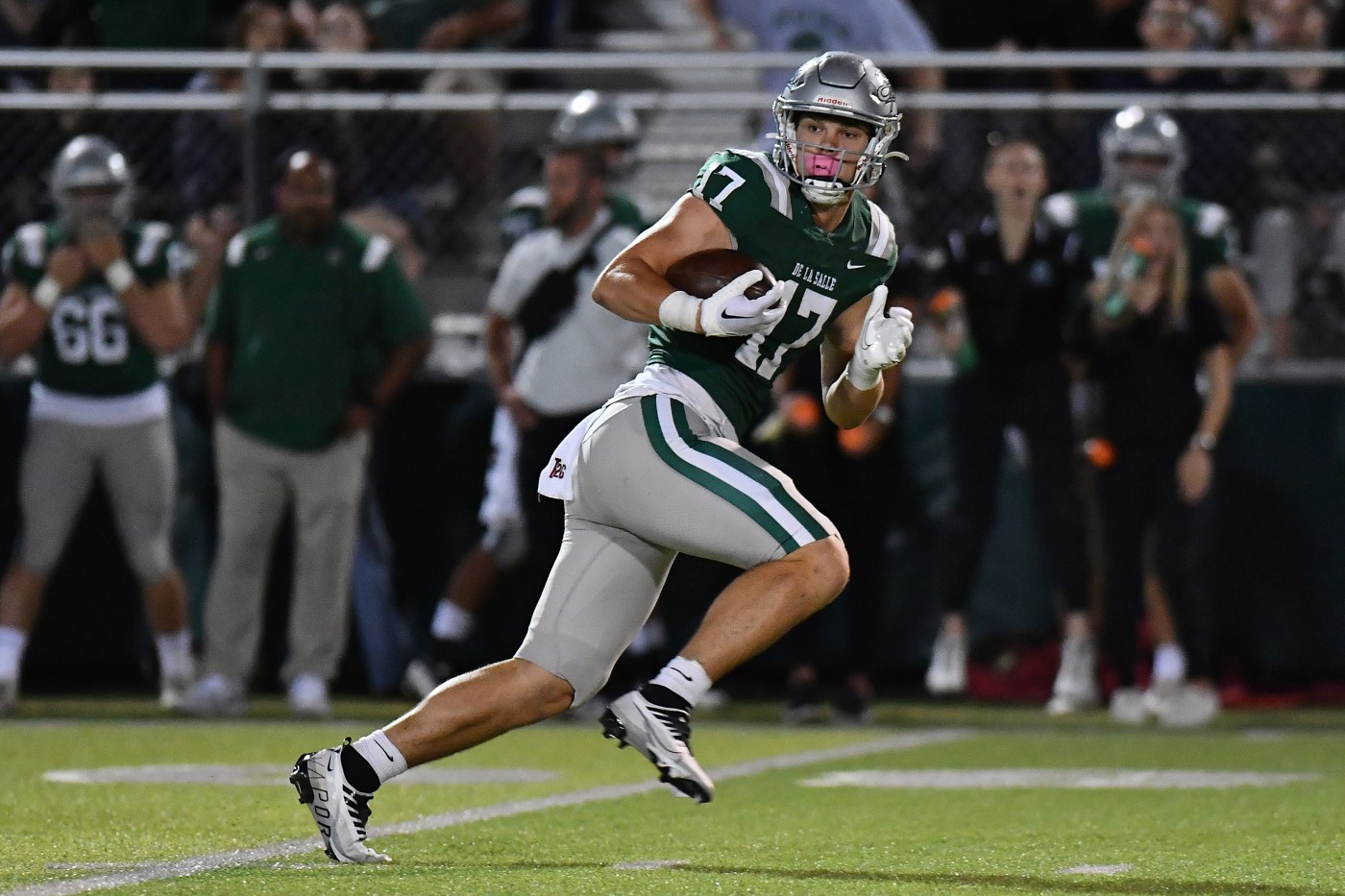 De La Salle is back in action this weekend after having last week off. Serra puts its undefeated record on the line when it travels to San Jose to play Bellarmine.

San Ramon Valley and McClymonds are set to collide in Oakland.

Here is the Week 7 preview and schedule:

No. 1 Serra (5-0, 2-0) vs. No. 7 Bellarmine (3-2, 2-0) at San Jose City College, 7 p.m.: The measuring stick for all West Catholic Athletic League teams this season is Serra. Bellarmine has won three in a row after opening with competitive losses on the road against Menlo-Atherton and McClymonds. But can the Bells compete with Serra? In the past five meetings between the teams, Serra has outscored the San Jose school 210-7. Calpreps.com’s computer projects a similar score Friday: Serra 46, Bellarmine 0. The Padres have started WCAL play with victories over St. Francis 29-7 and Archbishop Mitty 35-7. The games were competitive for a half before Serra pulled away. The Padres also have non-league wins on the road over heavyweights Folsom and De La Salle. Bellarmine shut out Archbishop Riordan last week but needed Connor Tripp’s 37-yard field goal in the fourth quarter to win 3-0. In Serra’s victory over Mitty, Maealiuaki Smith threw two touchdown passes and Teddy Chung intercepted two passes to help lead the way. — Darren Sabedra

No. 2 De La Salle (3-2) at St. Mary’s-Stockton (6-0), 7 p.m.: De La Salle hasn’t lost back-to-back games in the regular season since 2009. St. Mary’s has never beaten the Spartans in seven meetings. Something has to give Friday night, and both teams should be plenty fired up. De La Salle is coming off a 24-20 loss to Folsom and is trying to avoid being a .500 team more than halfway through the season. St. Mary’s has outscored its first six opponents by an average of 35 points. That includes a 49-20 thrashing of St. Ignatius. If the Rams can beat DLS, it will firmly place them among Northern California’s elite. A De La Salle win affirms the status quo, with Serra, Folsom and the Spartans remaining the top three teams in NorCal. De La Salle has the better talent, with five players on recruiting lists by 247sports. They include Notre Dame-bound tight end Cooper Flanagan and Fresno State-bound running back Charles Greer. Receiver Naseri Danielson is St. Mary’s top recruit. In the previous seven games, DLS has won by an average of 26 points. None of the games has been closer than eight points (twice). – Mike Lefkow

No. 5 San Ramon Valley (5-0) at No. 6 McClymonds (3-1): A week after battling with Pittsburg’s Jaden Rashada, McClymonds will have to deal with another top-tier quarterback who can carve up a defense through the air. San Ramon Valley’s Luke Baker has completed 73% of his passes, and the majority of his 1,497 yards and 16 touchdowns have gone to big play wideouts Gavin Jones and Trevor Scott. San Ramon Valley’s defenders have gone against talented teams such as Elk Grove and Liberty, but McClymonds will be their strongest opponent thus far. The McClymonds backfield is stacked with speed. Jaivian Thomas has rushed for 389 yards and is averaging 10 yards per carry. Tajir Golden and Ferrari Miller average more than eight yards per attempt, too. Speed is also present on the defensive line, where the Warriors have racked up 22 sacks in four games. Malik Richardson leads the way with seven, and Jaysen Cole and Joshua Shanklin have six and four, respectively. If SRV wants to maintain its current level of efficiency, the Wolves will need to figure out how to give Baker a clean pocket. — Joseph Dycus

No. 18 Clayton Valley Charter (2-3) at No. 13 Amador Valley (4-1), 7 p.m.: After Clayton Valley lost three of its first four games, coach Tim Murphy decided to crack down. No more Mr. Nice Coach. Murphy’s new approach paid off, as the visiting Ugly Eagles beat previously unbeaten Jesuit-Carmichael 35-21 on Saturday. Amador Valley’s only blemish thus far was a four-point loss to unbeaten El Cerrito in the season opener. Now, two teams that had distinctly different first halves of the season play their EBAL Mountain openers against one another in Pleasanton. It’s a contest neither team can afford to lose if they want favorable seeding in the North Coast Section playoffs next month. Further, should CVC fall against Amador Valley, it could be facing a sub-.500 season for the first time since 2007, with games against San Ramon Valley, California and De La Salle still ahead. The Dons have an excellent shot at .500 win or lose Friday. They play struggling Monte Vista next weekend. But they finish with San Ramon Valley, De La Salle and California. The Uglies and Dons appear to be a matchup of Clayton Valley’s offense versus Amador Valley’s defense. The Eagles, with QB Christian Aguilar and 6-foot-3 junior receiver Davin Amos, are averaging 30 points per game. Amador Valley has yielded 35 points all year, but Clayton Valley is easily the toughest offense the Dons have come up against thus far. – Mike Lefkow

No. 22 Sacred Heart Cathedral (3-2, 1-1) at No. 17 St. Francis (2-3, 1-1), 7 p.m.: Both teams are coming off road wins. St. Francis ended a three-game skid with a 42-20 rout of St. Ignatius. Sacred Heart Cathedral bounced back from a loss to Mitty with a 36-20 victory over Valley Christian. St. Francis has won 12 in a row over SHC since losing to the Fightin’ Irish in 2008. When the teams met last season in San Francisco, St. Francis won 37-13 on its way to the WCAL championship. In St. Francis’ win last week, Keala Keanaaina ran for 232 yards and scored two touchdowns to lead the Lancers. Aidan McGrath threw for 243 yards and three touchdowns in SHC’s victory over Valley Christian. — Darren Sabedra

Miramonte (4-1) at Northgate (5-0), 7 p.m.: If things go Miramonte’s way in this Diablo Athletic League Foothill Division opener, expect a lot of points. The visiting Matadors have scored at least 35 in all but one game this season, with UCLA commit Luke Duncan (17 touchdown passes) leading the way. The Matadors aren’t just an air show, though. Bennett Destino has rushed for 357 yards and Thomas Wilson has gained 225. Northgate’s defense has been superb during the Broncos’ undefeated start, giving up an average of 5.6 points per game and shutting out two opponents. Peyton Reid-Day patrols the secondary, and the linebacking group is deep. R.J Anderson and Jack Kessler will call the signals against Miramonte. — Joseph Dycus

No. 16 Half Moon Bay (5-0, 1-0) at No. 10 Sacred Heart Prep (4-1, 0-0), 2 p.m.: The PAL/SCVAL Bay Division championship could be on the line in this one. Half Moon Bay edged league favorite Menlo-Atherton 22-21 last week. Sacred Heart Prep was picked by the Bay Area News Group to finish second. An HMB win Saturday will put the Cougars comfortably in the driver’s seat after just two league games. But as SHP has shown this season, winning in Atherton isn’t easy. Los Gatos, Archbishop Riordan and Mountain View each managed just seven points in losses at SHP, which has given up no more than 13 points in any game this season. MLB Shay O’Kelly leads the Gators with 50 tackles, including 10 for loss, and DB Luke Maxwell has a team-best three interceptions. Running back PJ Modena has rushed for 783 yards and nine touchdowns to lead HMB. The teams are 4-4 against one another since 2008. — Darren Sabedra

Arroyo vs. American at Washington-Fremont, 1 p.m.

How to report results/game details

We encourage Bay Area coaches or team statisticians to email the final score and key scoring plays (a few stats, if you have them) to highschools@bayareanewsgroup.com right after each game. Please include the school names in the subject line.