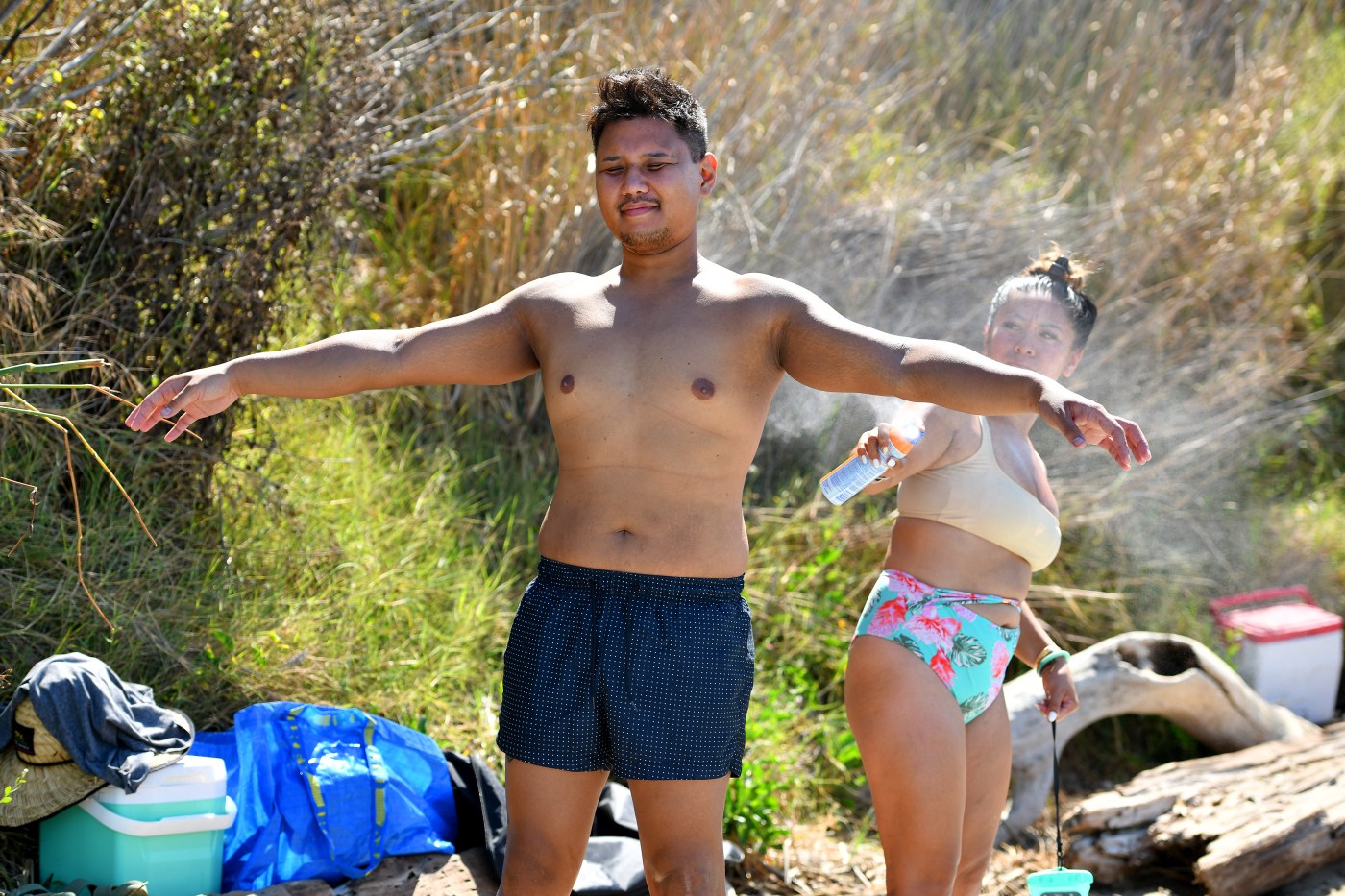 Californians endured another straight day of searing temperatures on Monday as this summer’s heatwave shattered records — with Livermore’s mercury hitting 116 degrees, the highest ever recorded, Travis Air Force Base in Fairfield registering a blistering 117 degree, and Gilroy registering 112 degrees, breaking its previous daily record of 106 set in 2020.

At its peak, the South Bay saw some of the most extreme temperatures in the region Monday. Along with Gilroy, Redwood City registered 106 degrees, beating the previous record of 97 set in 1983, according to the National Weather Service. San Jose even saw the highest temperature ever recorded on this date at 104 degrees, breaking the previously held record of 99 degrees in 2008.

But Livermore in the East Bay stood out for heat misery Monday, with a record 116 degrees, an all-time high for the city, and far above its previous daily record of 108 set in 1950. Even San Francisco — which so far has escaped the heat with its foggy natural air conditioning from the Golden Gate — recorded 97 degrees at San Francisco International Airport, edging out its previous record of 93 set in 2004.

While not records, other cities baked, with Saratoga, Los Gatos and Campbell recording 103- to 107-degree temperatures, the Concord Airport registering a sizzling 112 degrees, and Hayward with 102 degrees, according to the National Weather Service.

And while some relief may be coming on Wednesday, meteorologist Dalton Behringer said Tuesday could be the same or even hotter.

“It’s a strong heatwave,” Behringer said. “Today and tomorrow are really the peak days of this heatwave, and then going into Wednesday we’re going to have a really slight cool down. It’s still going to be hot, we have 98 forecasts for San Jose. Not cool.”

In downtown Oakland, temperatures reached 100degrees, breaking the previous record of 95 in 2008, leading to practically deserted streets save for a half dozen people by the waterfront. Chas Rudberg, 67, of Larkspur, docked his 13-foot kayak at the Jack London Aquatic Center after a three-hour journey that took him through the Oakland Estuary and out to the Bay before he returned.

He said he was out for recreation mainly and the cooler weather and breezes out on the water were a plus, adding that the weather “was real nice out there, a lot cooler than here.”

Others packed into cars to descend on the region’s beaches in droves. For the past few days parking lots have been full, beaches packed with people and traffic nightmarish in the area’s small beach towns.

“We knew it was going to be in the high 100’s, so we wanted to go to the closest beach possible,” said Luiz Vazquez, of Fairfield. “Luckily, the beach in Benicia is close to us as we try to survive the California heat!”

While the heat inland drove some people to the coast and beaches, others stayed close to home and kept their air conditioners on or tried to keep cool.

In Martinez, where temperatures soared to 108 degrees, Michael Van Wolbeck said he’s “not used to it being this hot, especially since it’s supposed to be cooler this time of year.”

With a home that has no air conditioning, Van Wolbeck has a few solutions: hunker down in the one room with decent airflow or outside with misters, or head to the Sierras or a nearby lake.

Knowing the temperatures won’t come down any time soon, Wolbeck said, “it’s going to be rough.”

“I’ve got to be back in work by Wednesday, too,” said Wolbeck, who works in a warehouse in Napa County. “I’m not looking forward to it, but what can you do?”

With more demand on the California power grid than ever before, experts warn that rolling blackouts could be in store across the state as the California Independent System Operator on Monday cautioned its system is teetering on the edge and encouraged people to cut down on their energy use between the hours of 4 and 10 p.m., when demand is the highest.

With temperatures expected to soar again Tuesday, the ISO also issued a flex alert for Tuesday between 4 and 9 p.m., when the projected electricity demand of 50,099 megawatts will be at a 2,000 to 3,000-megawatt deficit, the highest ever, ISO CEO Elliott Mainzer said in a press conference Monday. That’s the highest forecasted demand ever seen in California, a record set in July 2006.

“Every single individual can play their role,” Mainzer said. “It’s really about taking those specific steps after 4 p.m. and shifting all energy to before 4 p.m. or after the alert. This is an extraordinary event, a record-setting heat wave in terms of duration and temperature.”

Temperatures are expected to cool off slightly starting Wednesday, but by the weekend and next week, the region will see more seasonable weather. Behringer said he’s keeping a close eye on a tropical storm coming up the California coast which could bring with it a slight chance of showers and lightning.

With high temperatures drying up vegetation all week, Behringer says lightning could prove disastrous and start new fires while over 4,400 firefighters battle 14 major blazes as of Monday.

“It’s not a slam dunk, whenever a tropical system starts to move up the coast we’ll have a better idea of how far the moisture will reach but right now it’s tough to say,” Behringer said. “Over the next couple of days, we should start getting a better idea.”

Despite the heat, firefighters were able to make progress on the Mill Fire in Siskiyou County, which the Sheriff’s Office said had killed two women ages 66 and 73 on Friday, and destroyed 88 homes. That blaze was 40% contained Monday morning. The Mountain Fire, which also ignited Friday about 15 miles away, was burning in rugged, steep terrain and only about 10 percent contained. It has burned 10,338 acres in rugged terrain, where the vegetation is stressed by high temperatures and dryness, causing difficulties for firefighters, said Anale Burlew, assistant deputy director for Cal Fire on Monday.