‘I respect conservative Republicans, I don’t respect these MAGA Republicans,’ Biden told the crowd gathered at the Richard Montgomery High School in Rockville, a suburb of Washington, D.C.

Biden warned that ‘the MAGA Republicans don’t just threaten our personal rights and our economic security, they’re a threat to our very democracy.’

‘They refuse to accept the will of the people, they embrace political violence, they don’t believe in democracy,’ he continued. ‘That’s why in this moment, those of you who love this country, we must be stronger, more determined and more committed to saving America than the MAGA Republicans are destroying America.’

Biden outed Congressional Republicans who he said told him they felt they should have voted for the Inflation Reduction Act – his most recent legislative accomplishment that includes healthcare, prescription drug and climate initiatives – but didn’t, fearing political repercussions.

‘You’d think if the Republicans really cared about reducing inflation they would have voted for the Inflation Reduction Act,’ Biden said. ‘But every single Republican voted against it – even I know at least a dozen of them who thought they should vote for it, but they would be primaried for it.’

No Republican in either the House or Senate voted for the legislation.

‘Every single American needs to return the favor when we vote,’ Biden said.

The man, wearing a suit, was booed by the crowd and quickly ushered out. He shot up his fingers in a ‘V’ formation, a la Richard Nixon, and took a brief bow before he exited the room.

‘Let him go – let him go – that’s OK,’ Biden said as the incident played out. ‘Ignorance knows no boundaries,’ the president then added. 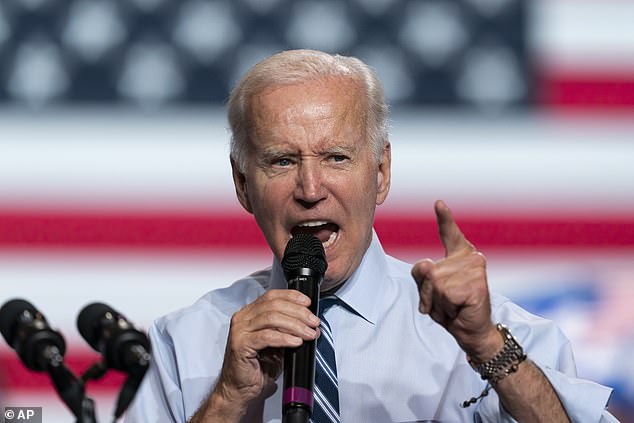 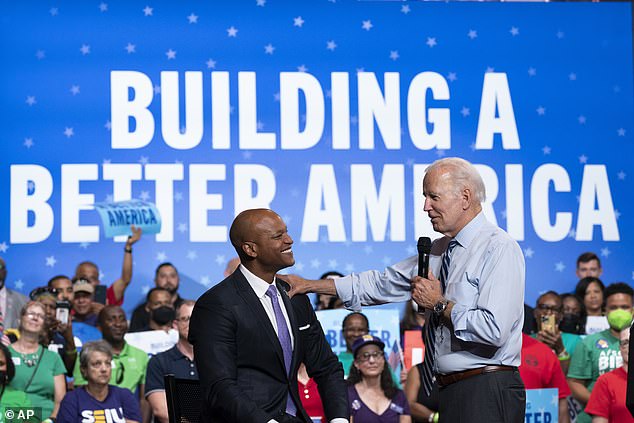 President Joe Biden (right) was in Maryland to stump for a quartet of Democratic candidate in Maryland but predominantly Wes Moore (left), the Democratic nominee for the governor’s mansion.

Biden went hard on the so-called ‘MAGA Republicans’ and the former president throughout his address.

‘Will we be a country that moves forward or backward? Will we build a future or obsess over the past? Will we be a nation of unity, of hope, of optimism, not a nation of anger, violence, hatred and division?’ he asked the crowd.

‘Trump and the extreme MAGA Republicans have made their choice. To go backwards, full of anger, violence, hate and division, but we’ve chosen a different path,’ the president said.

Moore is on the ballot against Republican Dan Cox, a Trump-backed MAGA candidate the Democratic Governors Association propped up in hopes he would be easier to beat in November in the purple state.

Cox is not supported by the state’s current moderate Republican Gov. Larry Hogan, a popular figure who was term-limited.

Of Moore, Biden pointed out ‘he’s a combat veteran.’ ‘Only drawback is he’s a Rhode’s Scholar,’ the president joked.

‘And if we all do our part, the next governor of Maryland,’ the president said to cheers.

Biden highlighted the race by saying ‘Wes knows all about MAGA Republicans, he’s running against one of them.’

‘So how extreme are these MAGA Republicans? Just take a look at what happened since the Supreme Court overturned Roe v. Wade – in red state after red state there’s a race to pass the most restrictive abortion limitations imaginable, even without exception for rape and incest,’ Biden said.

‘But these MAGA Republicans won’t stop there – they want a national ban,’ Biden continued.  ‘It won’t matter where you live, women won’t have the right to choose anywhere, anywhere,’ the president added, vowing to veto such a bill.

‘The MAGA Republicans have awakened the powerful force in America – the women of this nation,’ Biden continued. ‘MAGA Republicans don’t have a clue about the power of women. Let me tell you something, they are about to find out.’

‘What’s happened is, there are not many real Republicans anymore,’ Biden said. ‘By the way your sitting governor, he’s a Republican you can deal with. We disagree – no, no, I’m serious – but at least he’s in the mainstream of the Republican Party,’ the president said, calming crowd members who objected to any praise of Hogan.

Biden recalled how Van Hollen helped him prepare for his debates against Trump during the 2020 campaign.

‘So if you don’t like me, blame Chris,’ the president joked.

He said of Van Hollen’s election, ‘I’ll campaign for or against him, whichever will help him the most.’

Prior to Biden’s arrival, House Majority Leader Steny Hoyer, who represents Maryland, and Maryland Rep. Jamie Raskin, a key member of the January 6 House select committee spoke to the crowd.

‘There’s a lot more Republicans taking credit for a bill they actually voted against,’ Biden chided.

Before addressing the mainstage, the president popped into two rooms holding overflow crowds.

‘The good news of being in an overflow room is you can leave when I start to speak,’ he joked during his first stop, later adding, ‘I will not be offended if you leave. I’m going to go up and speak in a minute.’

He praised Maryland’s Congressional delegation, and kidded with one member of the crowd.

‘How do they let you wear a Penn State jersey?’ Biden asked, as the University of Maryland – another Big Ten school – is located nearby.

In a second room, a cafeteria, he addressed members of the school’s band, while one supporter loudly encouraged Biden to tackle ‘immigration!’ 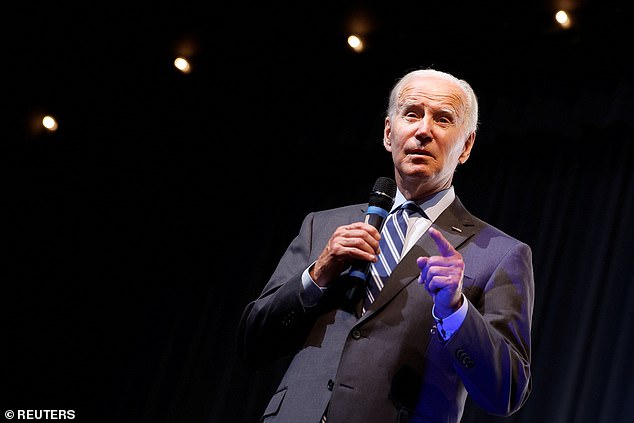 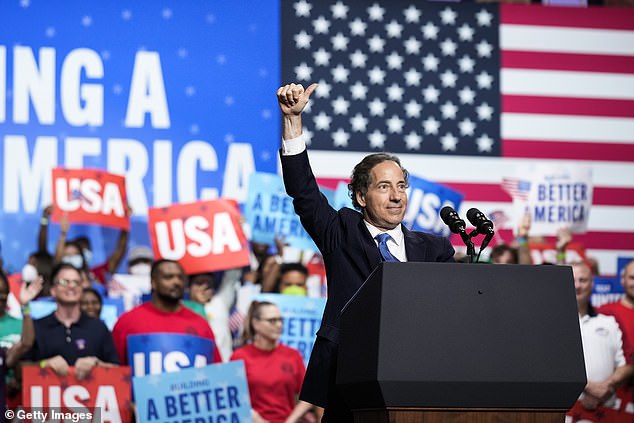 Rep. Jamie Raskin gives a thumbs up to the crowd Thursday night at Richard Montgomery High School in Rockville, Maryland 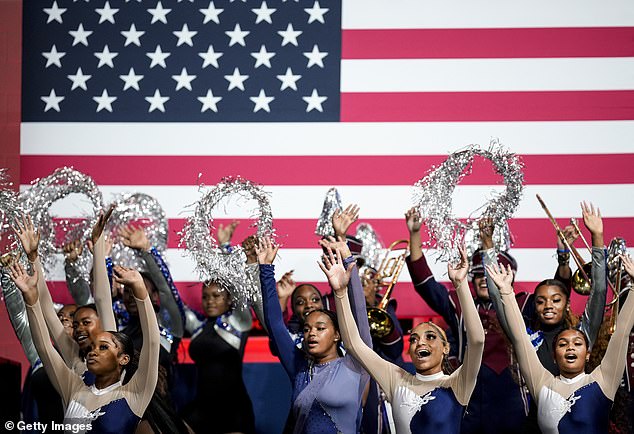 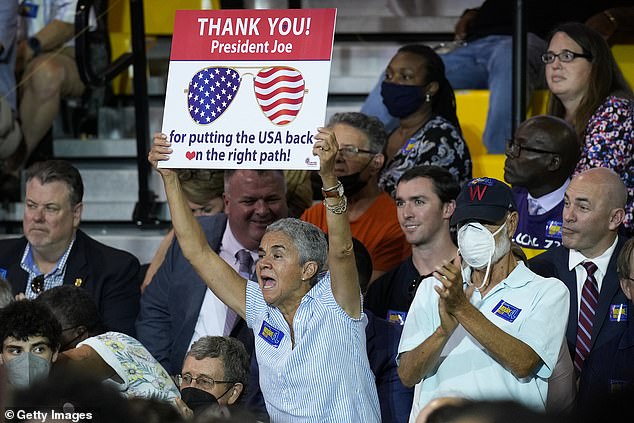 A woman holds up a sign thanking President Joe Biden ahead of the president’s appearance Thursday night in Rockville, Maryland 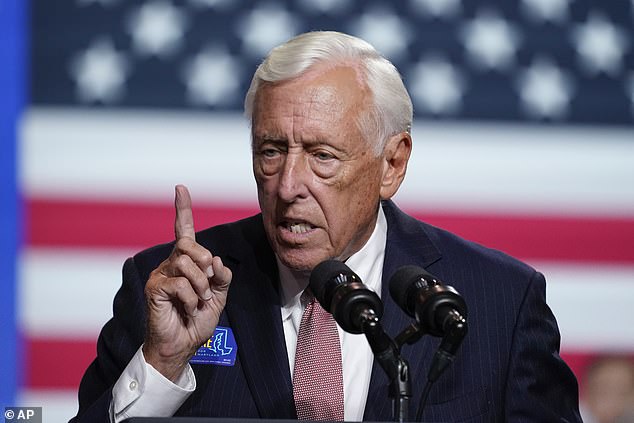 Earlier, at a fundraiser in Bethesda at a $3.1 million home, Biden used some of his harshest rhetoric yet to describe Trump and the ‘extreme’ Republican ideology, saying they represented ‘semi-fascism.’

‘What we’re seeing now, is either the beginning or the death knell of an extreme MAGA philosophy,’ Biden told about 100 wealthy donors. ‘It’s not just Trump, it’s the entire philosophy that underpins the – I’m going to say something – it’s like semi-fascism.’

The president warned that not only were reproductive rights on the ballot in November – but gay marriage – and the GOP could, again, go after Obamacare.

‘This is not your father’s Republican party. This is a different deal,’ he said, repeating a line he’s often delivered at fundraisers.

The small gathering in Bethesda, a tony suburb of Washington, D.C., was expected to raise $1 million for the Democratic National Committee and  the Democratic Grassroots Victory Fund. 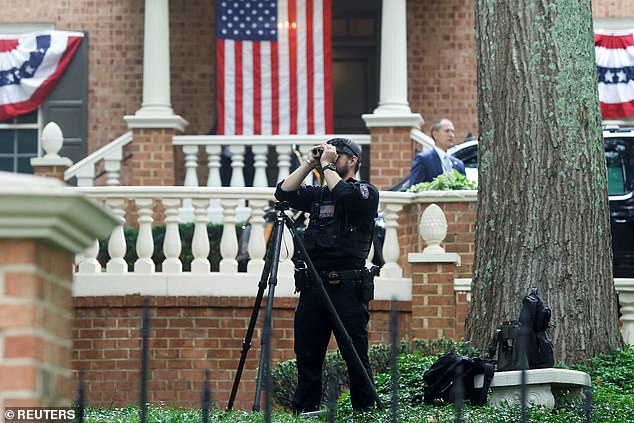 A member of the U.S. Secret Service stands outside the $3.1 million Bethesda home where President Joe Biden headlined a fundraiser Thursday evening 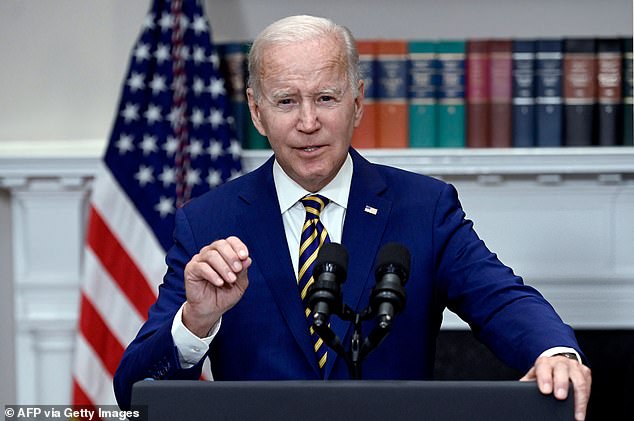 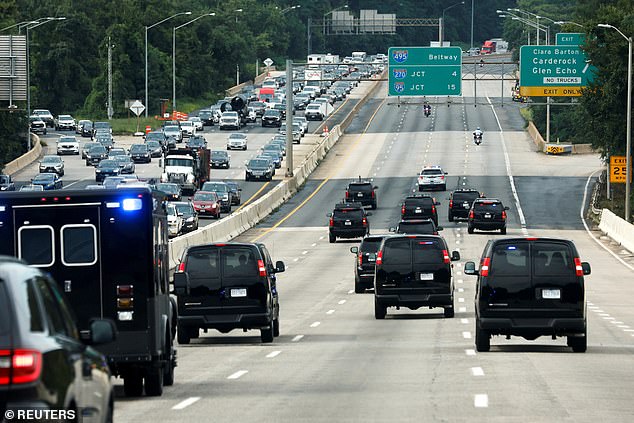 President Joe Biden’s motorcade is seen driving on the Capital Beltway as he traveled to a Bethesda, Maryland residence for a DNC fundraiser that was expected to bring the party $1 million

The DNC said Thursday the party had raised ‘a midterm record’ of $255 million this cycle and $92 million so far this year.

A spokeperson for the Republican National Committee hammered the president for returning from his two-state, three-home vacation Wednesday, only to turn around and headline a fundraiser in the ritzy D.C. suburbs the next day.

‘In typical Biden fashion, instead of fixing the multiple crises he created, he comes back from weeks of vacation only to hobnob with liberal elites inside the beltway,’ said RNC spokesperson Emma Vaughn. ‘If only Biden was as focused on serving hardworking Americans and families as he was on planning his vacations.’