Black Friday: How to spot fake discounts and get the best price Black Friday is tipped to become the busiest shopping day on record, according to Nationwide Building Society.

Britain’s biggest mutual is forecasting that spending on 25 November will be up by seven per cent compared to Black Friday last year.

The average shopper is expecting to spend a whopping £223, with two fifths hoping to get Christmas presents at a reduced price, and more than a third using the sales to buy items they need amid the rising cost of living. 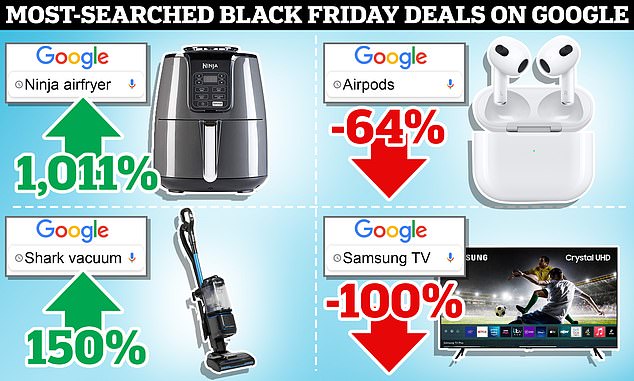 Keeping it essential: Ninja air fryer searches have increased a whopping 1,011% this year. Generally, air fryers have seen a massive rise in popularity over the last two years.

Mark Nalder, director of payment strategy at Nationwide Building Society, said: ‘While the rising cost of living may subdue some of the Black Friday spending, we still expect it to be the busiest shopping day of the year.

‘But while many will be tempted by the discounts on offer, it is only really a bargain if it is something you want or need.’

This is Money takes a look at what the most popular items are set to be this year, how to steer clear of impulse spending, and how to tell whether the product you are eyeing up is a genuinely good deal.

Britons are looking to get bargains on essential household items rather than ‘nice to haves’ this Black Friday, according to research by the comparison site, Money.co.uk.

It found that Google searches for Black Friday discounts on essential household items such as electric toothbrushes and vacuum cleaners were up 75 per cent and 150 per cent respectively compared to last year. 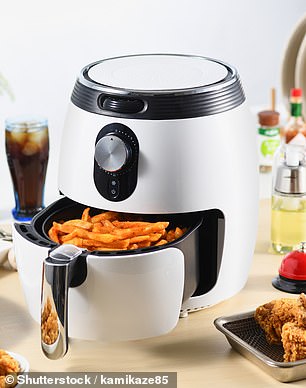 Black fry-day: Air fryers are set to be one of the top targets for shoppers this year, if Google searches are anything to go by

But the most-wanted item appears to be a Ninja air fryer, for which searches have increased a whopping 1,011 per cent this year.

Tellingly, searches for non-essential ‘nice to have’ items like a Fifa video game, Apple airpods and Samsung smart TVs were down 50 per cent, 64 per cent and 100 per cent respectively.

That said, Currys, the UK’s largest electrical retailer, says it is still expecting to sell plenty of TVs, which have historically been one of the most popular products on Black Friday.

It said it expected more than 20 per cent of its sales to be TVs during the Black Friday week, and 14 per cent gaming tech.

With energy prices on the rise many shoppers may also have warmth very much in mind when bargain-hunting this year.

The price comparison site Idealo is predicting that demand for electric heaters, electric blankets, thermostats and smart energy meters will be at least 10 per cent higher on average than it was last Black Friday.

How to spot a ‘fake sale’ and products to watch

Many Britons see Black Friday as a chance to make big savings on the normal retail prices of popular products.

However, according to research by comparison site Which? the deals are not as good as people often think they are.

It surveyed products that were on sale at supposedly ‘discounted’ prices on Black Friday 2021, and found that 85 per cent had been the same price, or cheaper, six months earlier.

Which? found that only three of the 119 products it monitored were at their absolute lowest price on Black Friday.

Britons are being warned to watch out for false discounts this weekend and ensure they compare prices to avoid getting ripped off. 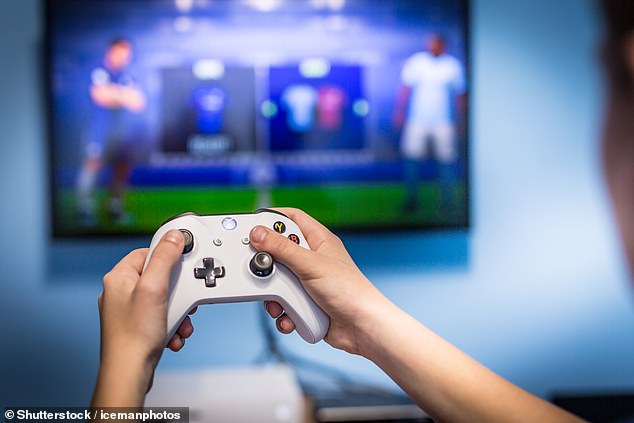 Watch out: Xbox One games were the product most likely to have their price inflated ahead of Black Friday, then brought back down for a ‘fake’ discount according to PriceSpy

PriceSpy, a product comparison site, analysed 98,100 products on its website and found that 9 per cent had increased in price from the start of October and, as of Monday this week, have dropped back down again.

Shops use this ‘fake sale’ tactic in order to advertise that a discount is bigger than it genuinely is.

A fake sale refers to the practice of hiking prices before a key sales period, to then reduce the price and display a saving based on the difference against the previously inflated price.

So far, fake sales are less widespread this year than in previous years, according to PriceSpy. Last year it found that 14 per cent of discounted sales were essentially fake.

However, the comparison site warned that shoppers need to be extra cautious when shopping for certain products this year.

It had found that Xbox games, trainers and coffee machines are some of the worst impacted by ‘fake’ Black Friday deals.

For example, one in five Xbox One games advertised were found to have ‘fake sales’ attached.

Liisa Matinvesi-Bassett, UK country manager at PriceSpy, said: ‘We know that the majority of retailers offer some of their best deals of the year on Black Friday, giving consumers a real opportunity to get genuine bargains.

‘However there are shops that engage in these fake sales and bring into disrepute the credibility of the sales event.

‘Shoppers should be wise to these marketing and pricing tactics and simply do a quick check of an item’s price history before parting with their hard earned cash.

‘People this year should really be asking ‘can I afford not to compare?’ 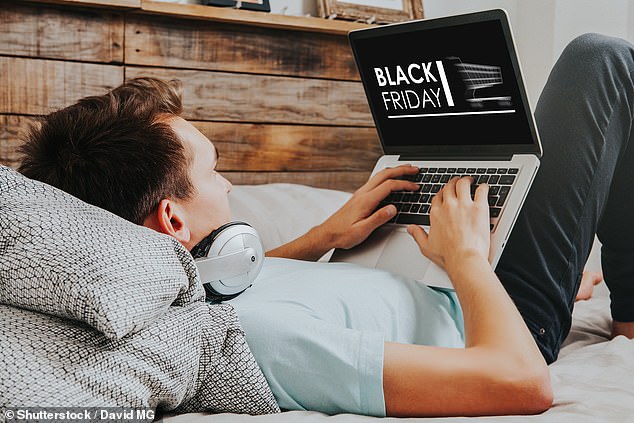 Despite the fake discounts, Black Friday still remains the cheapest shopping day of the year, according to PriceSpy.

On Black Friday last year, over four in 10 products were cheaper compared to the start of November, with average savings of over a fifth when looking at products with discounts above 10 per cent.

Matinvesi-Bassett adds: ‘Our data reliably demonstrates that Black Friday is the best day of the year to snap up a bargain.

‘However, the extent of fake sales this year means it’s more important than ever for shoppers to look at price tags with both eyes open and do their research to ensure they’re getting the right product for the right price.’

Know what you want and don’t get distracted

Before making any impulsive purchases, it will always be worth comparing prices against multiple shops to ensure you’re not getting blindsided by an attractive looking discount.

How to check whether a price has been hiked

It’s worth looking out for a product gradually increasing in price before suddenly dropping on the intended day of the sale – in this instance, Black Friday or the start of Black Week.

This will ultimately require shoppers doing their research and knowing what certain items should cost.

For online shoppers, using a price history tool to check what price a product has been on sale for in the past will help.

You can do this on the PriceSpy website, which has graphs showing how the cost of  a product has changed over time.

Amazon shoppers can use a website called CamelCamelCamel to check the price history of items, and get price drop alerts.

Ed Fleming, managing director at discount website Savoo says: ‘In the lead up to Black Friday, have a look at the different brands selling your wanted items.

‘Some companies may announce what deals will be on beforehand, while others may keep it under wraps until the big day.

‘On Black Friday, compare prices on competing websites before making any purchase. That way you know you’re getting the best deal possible.

‘Bookmarking pages is a great way to keep track of your items when researching other brands, as well as also making a note of them in your list in case you need to refer back to them.’

Experts also recommend making a shopping list and sticking to it, in order to avoid getting sidetracked by impulsive shopping habits and buying something you don’t need.

Fleming adds: ‘Whilst it can be easy to get swept up in the variety of deals available on Black Friday, it’s important to keep spontaneous spending at bay during this period to avoid spending beyond your means on items you do not necessarily need.

‘Making a list, and most importantly sticking to it, will ensure you don’t get tempted by other deals for products you may not need.

‘When making your list, only include items you were planning on buying anyway. This will ensure you really do save money during the Black Friday season, rather than end up spending more.’ 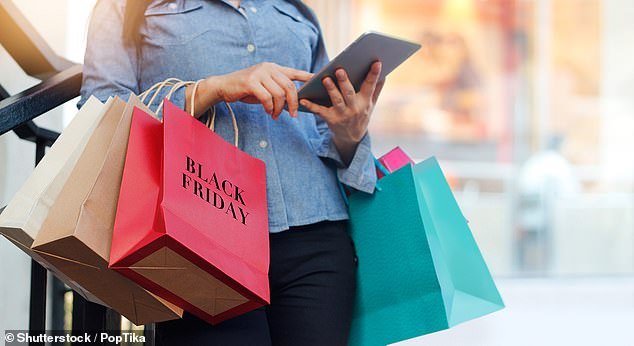 Compare before you buy: Shoppers are being urged to see what particular products are selling for in other stores before purchasing

Eight in ten Britons admit to feeling ‘buyer’s remorse’ – feeling elated by a purchase, only to feel gutted when it arrives, according to research by Capital One UK.

Clothes that looked amazing on the model, underwhelming takeaways, children’s toys which were never played with and fragrances that don’t smell as expected were revealed as the top regret purchases made by Britons.

One in five have been left uncomfortable by ill-fitting underwear, whilst gym equipment is a major regret purchase, with expensive kit that is never worn, weights that end up gathering dust and running machines that are rarely switched all featuring in the 20 most disappointing purchases.

Alice Beer, a broadcaster and consumer affairs champion said: ‘This year more than ever, consumers will be eager to get a good deal on their festive spending.

‘But Black Friday and Cyber Monday deals aren’t always the great value people are led to believe, and can lead to regret.

‘It’s important for people to be more mindful when spending this holiday season, and not fall victim to the short-lived thrill and FOMO  [fear of missing out] of the biggest spend time of year.’

Avoiding social media this weekend could be one way to avoid any ill thought through purchases.

A third of people feel that social media ads have encouraged them to buy items they later regret, according to Capital One. 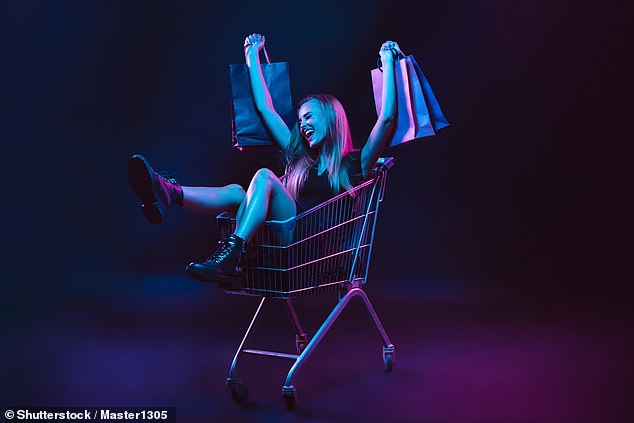 Retail therapy? Eight in ten Britons admit to feeling ‘buyer’s remorse’ – feeling elated by a purchase, only to feel gutted when it arrives

Alice Beer says: ‘Unfollowing these brands or avoiding entirely around the festive period will help you avoid impulse spending on deals they promote on social media.

‘Also consider taking a break or ‘sleeping on it’ before you check out your basket – this gives you a bit of breathing space to ponder your purchases and might keep you from a regretful impulse buy.’

Protect yourself with a credit card rather than using a debit card is another sensible option when shopping on Black Friday.

A major bonus with credit cards is the consumer protection you are entitled to, under Section 75 of the Consumer Credit Act 1974.

Put simply, if you use the credit card to buy something worth more than £100, here or abroad, the card issuer is equally liable if something goes wrong.

‘When used properly, credit cards can be a good tool to budget and purchase big-ticket buys,’ adds Beer.

‘This means that if anything goes wrong with your order, your credit card provider is jointly liable to reimburse you.’

However, shoppers should pay off their credit card bill in full every month to avoid hefty charges.