Bold prections for your draft’s early rounds – The Mercury News 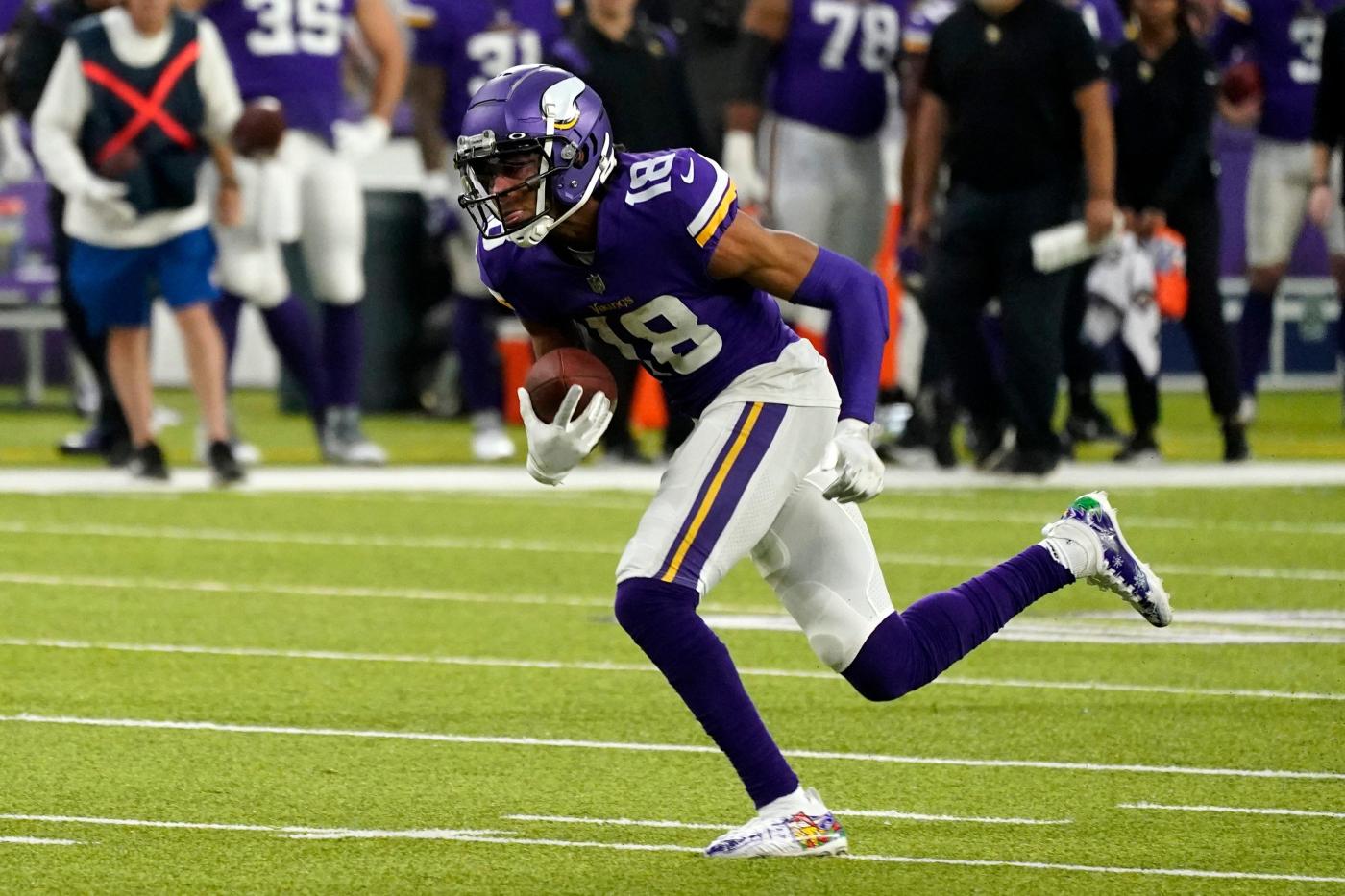 I had my first Fantasy Draft this week in the OFFL — Our Frivolous Fantasy League. The OFFL has been around since 1985, the longest running Fantasy league that I’m aware of. Here are my bold predictions for players taken in rounds one to five.

Justin Jefferson will be the No. 1 Fantasy WR — Jefferson is in the mythical third year for receivers, where history suggests they will break through to the next level. If he didn’t “break through” last year, I can’t wait to see what he accomplishes in 2022. Randy Moss is the best WR in Minnesota Vikings history. He was poetry in motion, flying past defenseless backs with ease in a flash of purple and gold. His best season was in 2003 with 111 receptions for 1,632 yards and a staggering 17 TDs. Jefferson came close to Moss last year with 108 receptions for 1,616 yards and 10 TDs. New head coach Kevin O’Connell and offensive coordinator Wes Phillips arrive in Minnesota hot off the Rams’ championship season. They orchestrated an offense around Cooper Kupp, who had a ridiculous 145 receptions for 1,947 yards and 16 TDs. I’m not predicting those pinball numbers, but I do expect Jefferson to thrive in this new system to best the records of Moss. That should be good enough to rise to the top of the WR charts for 2022.

Josh Allen will shatter QB points scored — Ignore the “don’t take a QB early” crowd. The Bills were third in the NFL in 2021 with 483 points scored. This year they will have to score even more. The Buffalo defense was ranked No. 1 last year, but they played one of the easiest schedules in the NFL, facing such easy marks as the Commanders, Texans, Jags, Saints, Panthers, Falcons, Jets (twice) and Dolphins (twice). The Bills allowed just 10.3 points per game in those ten contests. Conversely, when they played the big boys — the Chiefs (twice), Bucs, Titans and Colts, they gave up an astounding 170 points in five games, for a dismal average of 34 points per contest. If the Bills are to make it to the Super Bowl, Allen is going to have to put up gargantuan numbers to offset his suspect defense. He faces a murderer’s row of the Rams, Titans, Ravens, Chiefs, Packers, Vikings, Bengals and a resurgent AFC East. I’m predicting 50 total TDs rushing and passing (yes, 50) with over 5,000 passing yards and 600 rushing yards. Anything less and the Bills will be home for the holidays.

David Montgomery will be a Top 15 RB — Volume is king in Fantasy. Montgomery averages over 20 touches per game. His 15 points per start in 2021 tied him with Aaron Jones (11th in PPR scoring), Josh Jacobs (12th) and Nick Chubb (13th). Missing four games last season, Montgomery still finished as RB19 in PPR formats. How he accomplished this with the NFL’s worst head coach is a miracle. The since-fired Matt Nagy’s mish-mash game plans looked like Arena League football; chucking the ball all over the place with gadget plays and no balanced attack. Only Nagy could make Pro Bowl WR Allen Robinson decline to 38 receptions last year after catching 102 in 2020. New offensive coordinator Luke Getsy made Aaron Jones a topflight back in Green Bay. With mobile QB Justin Fields running Getsy’s run-pass-option offense, Montgomery will thrive both rushing and receiving. Draft him with confidence.

Kyle Pitts will finish Top Three at TE — The Falcons will trail in most games and have to throw a lot. They don’t have any veteran WRs that could make many NFL rosters. Do the names Bryan Edwards (traded from the Raiders), Olamide Zaccheaus (undrafted free agent), KhaDarel Hodge (cut by the Lions), Damiere Byrd (cut by the Bears) or Frank Darby (2021 sixth rounder) strike fear in the hearts of foes? I think not. At least the Falcons realized their dearth of WR talent by making Drake London the first wideout drafted in 2022. Besides London and Pitts, who is new QB Marcus Mariota going to throw to? Pitts is something special. He had the second-most receiving yards by a rookie tight end in NFL history last year with 1,026. Mike Ditka has held the record (1,076 yards) since 1961. That’s a lot of time between stellar rookie campaigns. If you saw Pitts’ highlight reel 52-yard reception in last week’s preseason game against the Jets, you might be tempted to draft him the No. 1 TE in Fantasy.

Rhamondre Stevenson is a Top 20 RB — Bill Belichick believes in the dreaded RB by committee. But Belichick does love RBs that can catch. From 2016-2020, Patriots RB James White averaged 50 receptions, 500 yards and 5 TDs. Last year the less talented Brandon Bolden chipped in 41 catches for 405 yards and two TDs. White retired and Bolden is in Vegas, leaving a golden opportunity for Rhamondre. He is the best receiving back on the Pats. Big, fast and elusive, his style is the opposite of north-south running teammate Damien Harris. I expect Harris’ carries to diminish a bit since Rhamondre missed five games in 2021. Therefore, if we extrapolate Stevenson’s rushing totals based on last season, he will have 900 yards and eight TDs. Add the expected receiving role (50/500/5), and he is in a point total class with first/second rounders Fournette, Mixon, Kamara and Cook. Don’t wait too long to pounce on Rhamondre at your draft; even the famously negative Belichick praised him to the Boston press this week.

This season I am teaming up with FantasyGuru.com, the finest source for Seasonal, DFS (Daily Fantasy Sports) and Sports Gaming advice. Look for Fantasy Billboard every week in the Daily News and a separate column at FantasyGuru.com. Check it out.