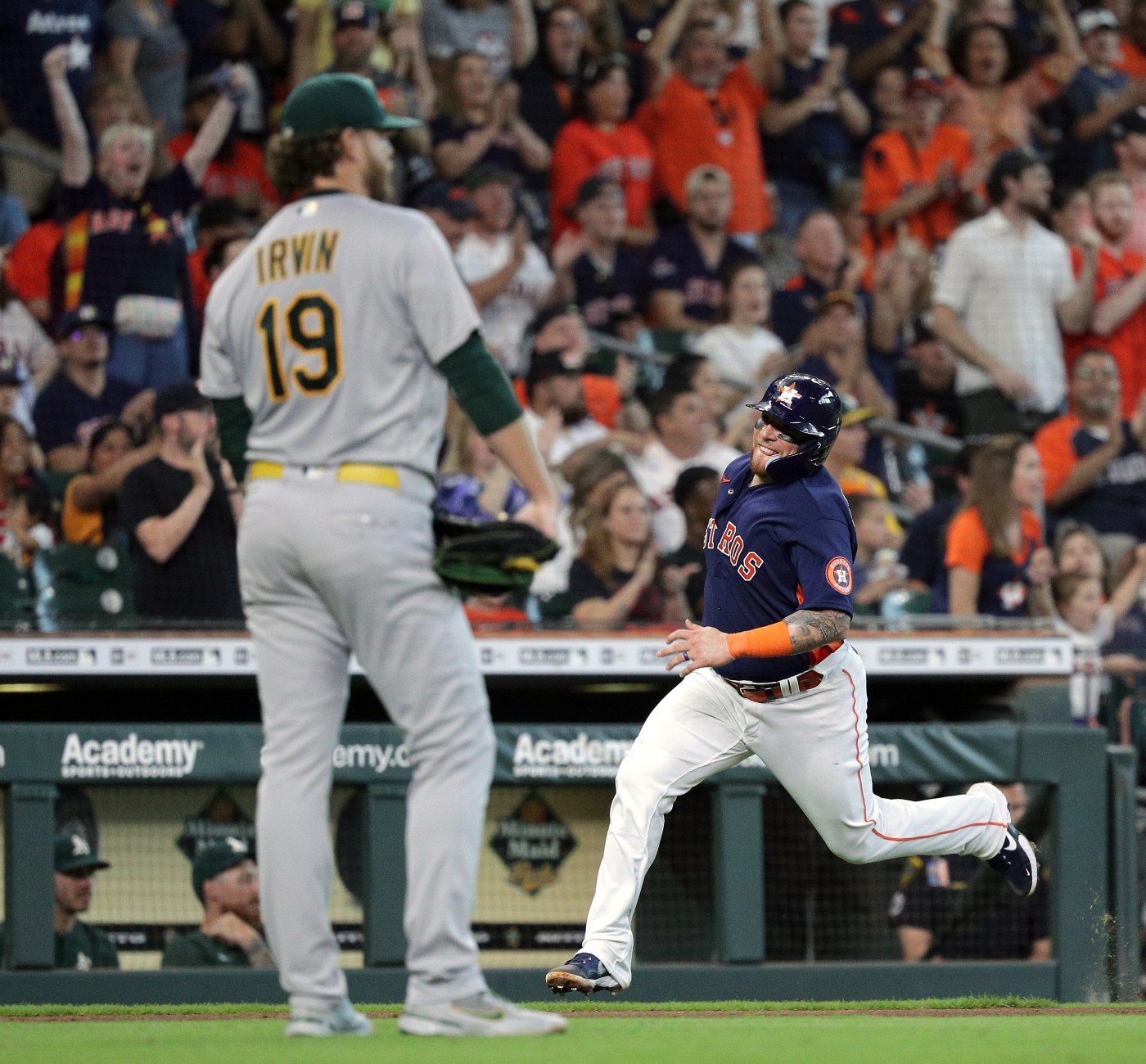 Two weeks after Cole Irvin’s sharp pitching led to the Astros being swept in a series for the first time since last September, the American League leaders and right-hander Cristian Javier flipped the script on the A’s this weekend in Houston.

Irvin struggled Sunday as the Astros beat the last-place A’s 6-3 for the three-game series sweep.

Javier (6-8) allowed only one hit and walked three batters while striking out six in six innings of work en route to the A’s eighth consecutive loss.

Irvin (6-10) has been one of the best pitchers in the MLB since July, posting a 1.88 ERA entering Sunday’s game. But the Astros were able to get to him early, with Alex Bregman smacking a two-run homer to left field in the first that put Houston up early.

In the next inning, the Astros continued to do damage. Irvin gave up back-to-back singles to Chas McCormick and Christian Vazquez before José Altuve hit a two-run double to give Houston a 4-0 lead.

Irvin settled in as the game went on, retiring nine of 11 batters over the third, fourth and fifth innings. The Astros added another run to the board in the sixth inning after Christian Vazquez hit a single to left field that sent Kyle Tucker home.

Irvin, who’d allowed three or fewer runs in each of his last seven starts, finished with eight hits and one walks while recording only one strikeout in six innings. The Astros’ five earned runs were the most Irvin allowed in more than six weeks.

The A’s have now given up five or more runs in eight games this month and 11 since the All-Star break.

Oakland’s offense struggled to get anything going, which has been the case this entire series. They failed to cash in on several opportunities, leaving a runner stranded in each of the first four innings, and narrowly avoided the shutout thanks to Nick Allen’s home run in the eighth, a solo shot to center field. Oakland hadn’t scored a run since Friday night and went scoreless for 18 straight innings before Allen’s homer.

The A’s tried to rally in the ninth, with Elvis Andrus and Stephen Vogts leading off the inning with back-to-back hits. Andrus scored off a grounder by Jonah Bride and rookie Cal Stevenson was sent home with a single by Tony Kemp.

But it was a little too late for Oakland.

Ramón Laureano exited the game with an apparent injury in the bottom of the fourth inning and was replaced by Stephen Piscotty. Laureano stayed in the game after slipping on the warning track while going after a foul ball in the first inning.

The game was also paused in the sixth inning when Kemp had an injury scare after he attempted a diving catch. Kemp ultimately stayed in the game.

The A’s will stay in Texas for a four-game series against the Rangers before heading back to Oakland at the end of the week.

Right-hander James Kaprielian (3-6, 4.38) is slated to pitch for Oakland in the series opener Monday. He’s gone 3-1 with 2.35 ERA over seven starts since July 1 after posting a 5.88 ERA in his first 11 starts this season. Meanwhile, it’s unclear who will start the series on the mound for the Rangers as of Sunday afternoon.