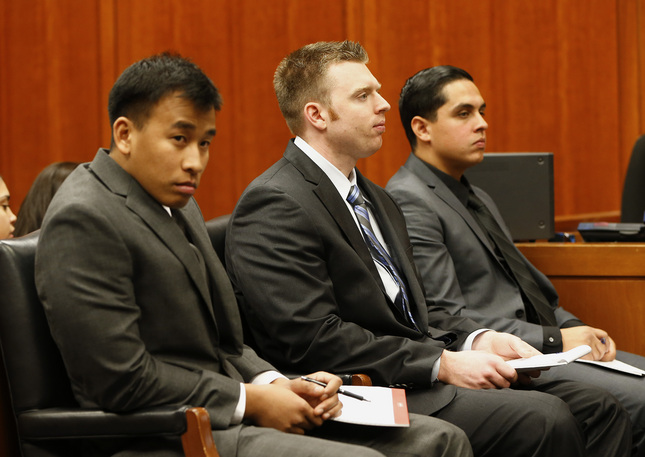 The decision, published Monday by the Fourth District Court of Appeal, came more than five years after Jereh Lubrin, Matthew Farris and Rafael Rodriguez were convicted in a San Jose courtroom and more than four years after they were given prison sentences of 15 years to life. The killing of Tyree was a landmark event in the county, prompting a massive top-down civilian audit of the county jails and ongoing scrutiny of South Bay custody operations that continues to this day.

The conviction came only after the jury in the 2017 trial was given a key instruction by the judge: It was told that it could consider a legal theory known as “natural and probable consequences,” which would allow it to find a defendant guilty of murder even if the person may not have committed the killing, because the victim’s death was a natural consequence of the defendant’s actions. In the Tyree case, this meant that the jury did not need to consider each defendant’s individual responsibility or awareness in order to find all three guilty of second-degree murder.

But in his new ruling, Thomas M. Goethals, associate justice of the Fourth District court’s third division, noted that Senate Bill 1437, passed one year after the jail beating trial, declared invalid the natural and probable consequences theory. That meant that while the jury instruction was proper at the time of the trial, it no longer is. And, Goethals said, the impact of the 2018 law is retroactive.

The state Attorney General’s Office can appeal the Monday ruling, and did not immediately return a request for comment. Short of an appeal, Goethals’ conclusion will stand, and per his ruling, “the prosecution may elect to retry defendants on a valid theory or theories of homicide with a properly instructed jury.”

The Santa Clara County District Attorney’s Office was not prepared to announce whether it will re-file the case, saying in a brief statement, “We’re reviewing the court’s decision.”

“Prosecutors should not have been allowed to consider the NPC theory, and the appellate court could not find it was harmless beyond a reasonable doubt,” Jones said. “I think (the court) did the right thing.”

Attorneys for Lubrin and Farris did not immediately respond to requests for comment Monday.

Tyree, 31, was a mentally ill man being held in the county Main Jail while he waited for a bed to open up at a residential treatment center. On Aug. 26, 2015, prosecutors say Lubrin, Farris and Rodriguez severely beat Tyree in his cell. Tyree suffered severe injuries including trauma to his spleen, small bowel, liver, face, skull and the front and back side of his body. Jurors rejected a defense argument that the injuries were the result of an accidental fall or suicide.

During the initial trial, prosecutors relayed to the jury text messages between the defendants suggesting that they reveled in rough treatment of inmates, and Rodriguez was reported to have conducted a web search titled, “Can you die if someone punches you in the armpit?” the day after Tyree died.

In the appellate ruling Monday, Goethals referenced arguments by the state Attorney General’s office that the murder convictions could still be upheld if the jury found the three acted with “implied malice,” or knowledge that their actions could be deadly, and proceeded anyway. The problem with that argument, Goethals said, is that unlike the natural and probable consequences theory, implied malice can’t be assigned collectively, and has to be individually assessed for each defendant.

“The NPC theory provided to the jury by the trial court and specifically invoked by the prosecutor, removed from the jury the critical task of determining any defendant’s subjective risk awareness as the fatal events unfolded inside Tyree’s cell,” Goethals wrote.

It was not immediately clear Monday how long Santa Clara County prosecutors have to re-file charges against the three defendants. If they are charged a second time, they would be transferred to a Bay Area jail facility as they prepare for trial. After their arrests, they were housed out of county in Santa Rita Jail in Alameda County as a security measure.

They all filed their initial appeals in February 2018, about a month after they were sentenced and well before the state laws changed. Currently, Lubrin, 35, is being held at the California Substance Abuse Treatment Facility in Corcoran. Farris, 34, and Rodriguez, 33, are being held at Mule Creek State Prison in Ione.