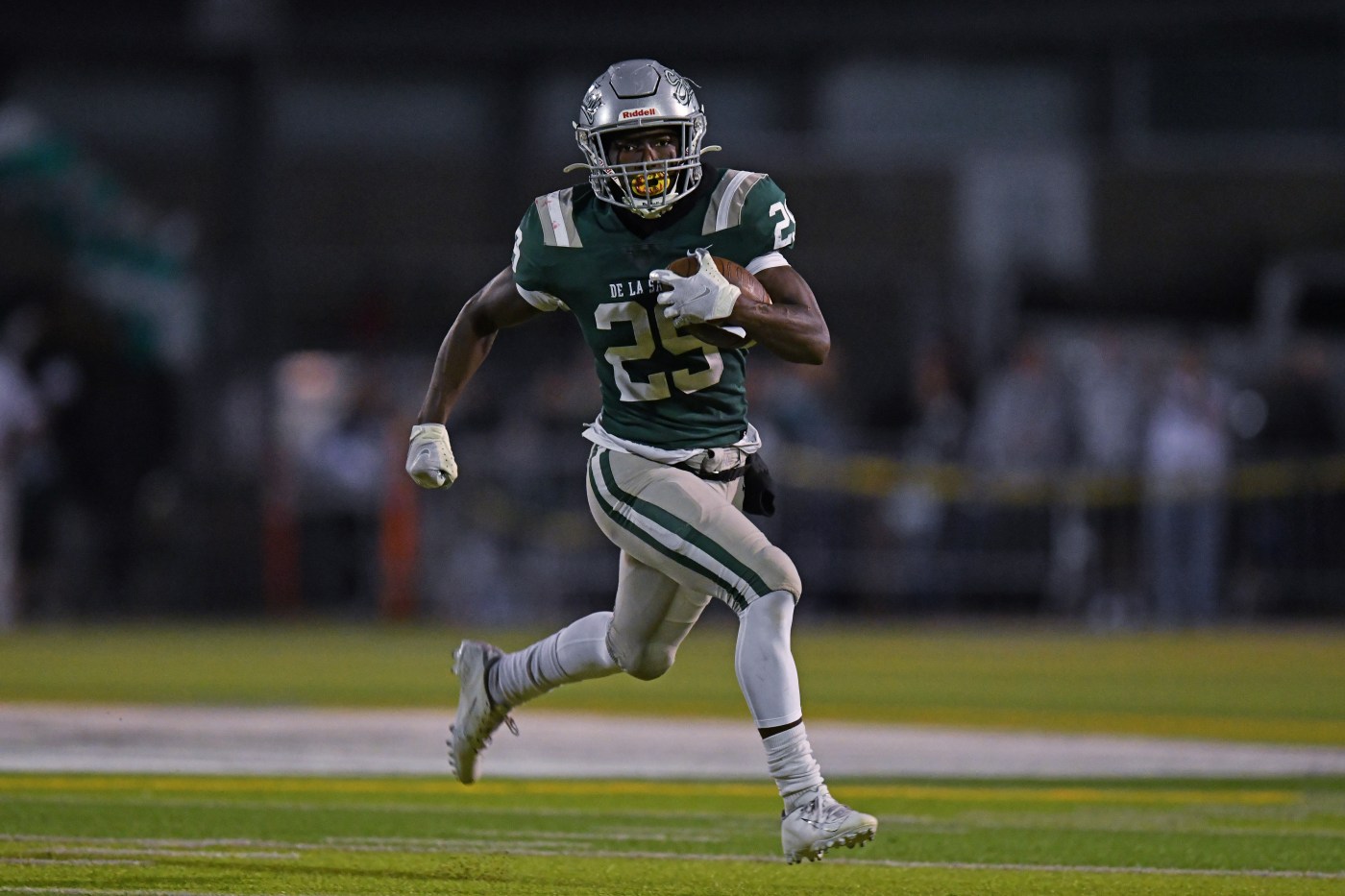 At halftime, it looked De La Salle’s season opener was going to be like a typical game. But by the first minute of the fourth quarter, the Spartans were getting quite the scare from Monterey Trail.

But two late touchdowns from running back Charles Greer and the final two of four interceptions on the night helped the Spartans finish off the Mustangs for a 36-20 win.

In the eyes of De La Salle head coach Justin Alumbaugh, there wasn’t a lack of effort but a glaring lack of execution.

“Monterey Trail’s good — Coach Ewing does a great job, those guys play their tails off,” Alumbaugh said. “We knew when we have opportunities that we were going to have to put them away, and we had opportunities and we didn’t. That’s partially because of their effort and largely because we didn’t get done what we should have.”

The Spartans scored the first 16 points of the game on a field goal and two touchdowns, the first a pass from Carson Su’esu’e to Cooper Flanagan and the second a 16-yard run from Blanche (though they missed a point-after kick). After a Mustang touchdown, Su’esu’e added another scoring pass to JC Romo right before half to take a 22-7 lead into the break.

De La Salle nearly scored on the opening drive of the third quarter but turned it over on downs. Monterey Trail drove all the way back right away for a touchdown and looked to score the two-point conversion to make it a seven-point game, but the referees waved the score off. That proved vital when the Mustangs opened the fourth quarter by blocking a punt and returning it for a touchdown, making it 22-20.

“Our special teams killed us — a muffed PAT, a blocked PAT and a blocked punt, that’s ridiculous,” Alumbaugh said.

From there, the Spartans turned to their offensive line and Greer, who carried the ball 18 times in the second half (according to DeLaSalleTV), helping cap off back-to-back long drives with touchdowns to help De La Salle pull away with the win.

All of Greer’s carries came in the second half because he sat out the first half for undisclosed reasons. Alumbaugh declined to directly answer when asked why he sat out in the first half, but indicated that whatever the reason was, there would be no lingering effects.

“Charles is a good young man and we fully intend on him starting next week,” Alumbaugh said. “He’s an electric runner. You could tell the difference as soon as he was in the game, so it was nice having him in that second half, there’s no doubt.”

The Spartan defense forced six turnovers on the night, including picking off four Mustang passes. Alumbaugh expressed frustration at not putting more points on the board off of those turnovers.

As the top-ranked team in the Bay Area, the Spartans will play their home opener in a nationally-televised matchup against the No. 2-ranked team Serra, who opened their season with a 17-12 win at San Joaquin Section powerhouse Folsom on Friday night. Alumbaugh said that he and Serra coach Patrick Walsh, both De La Salle alums, will not talk this week instead of their usually texting or talking every other day.

“Patrick and I were joking that we both wish each other best of luck on a 9-1 regular season,” Alumbaugh said.