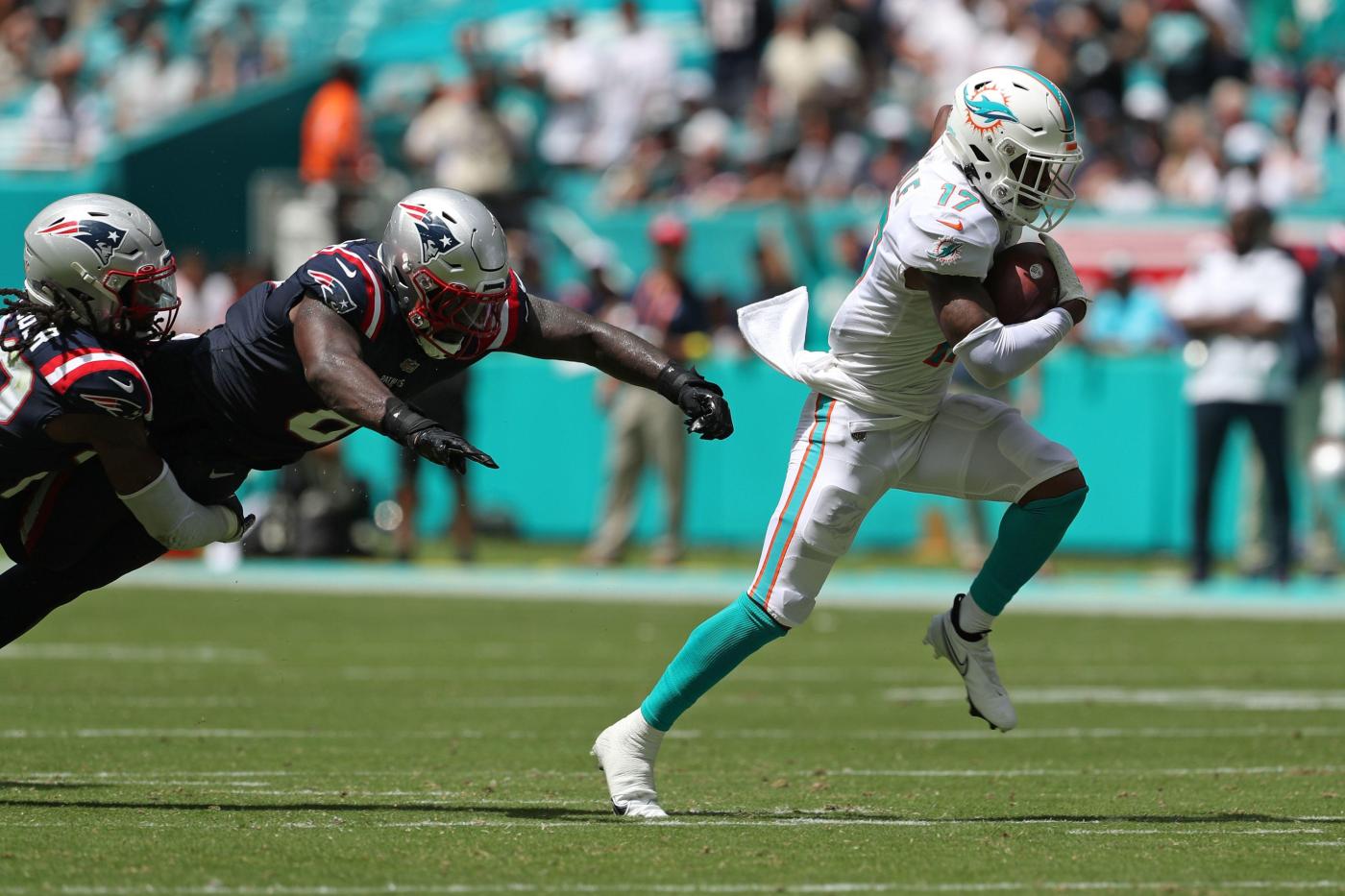 The Dolphins’ opened in winning style with a 20-7 win against New England.

The offense? Well, a work in progress.

But you beat your division rival and don’t play your best and you’ll take it every time. Here are 10 thoughts on the opener:

Play of the day: Brandon Jones had 11 tackles Sunday and a sack that opened up the game. The constant to Dolphins-Patriots game in recent years is the Dolphins defense has scored points and changed days. They had two touchdowns against the Patriots offense in last year’s finale and Xavien Howard caused and recovered a fumble to win last year’s opener. This time it was Jones blitzing the blindside in the second quarter as Patriots quarterback Mac Jones went to pass from his 2-yard line. Jones hit him, the ball popped lose and one-hopped into Melvin Ingram’s hands for an easy touchdown.

2. The difference Sunday? It was speed. Exactly as advertised. Just in the first half, Tyreek Hill had six catches for 77 yards and ran a reverse for 6 yards and Jaylen Waddle split three defenders on a perfect strike from Tua Tagovailoa for a 42-yard touchdown. That’s pretty much what the Dolphins plotted with this kind of speed at receiver. Hill was a short target, stretched the defense on long routes and took a 26-yard pass away from Patriots cornerback Marcus Jones. And Waddle? For the day, Hill had eight catches for 94 yards and Waddle had four for 69 yards.

3. You saw the misdirection and creative scheming of Mike McDaniel’s offense that a disciplined Patriots defense wasn’t falling for too much. But one question of McDaniel’s game managing began to focus Sunday: He’s going to be more aggressive on fourth downs. With 24 seconds left in the half, facing fourth-and-8 from the Patriots 42-yard line, McDaniel went for it and Tua made a perfect throw over the middle to Waddle, who split three defenders to run for the touchdown. Now, New England had no time-outs so with such little time left on the clock it would have been surprising if McDaniel didn’t go for it there. A better measuring stick came on the first drive. Facing third-and-1 at the 50. Tagovailoa threw deep and incomplete to fullback Alec Ingold. That’s the kind of play you run knowing you’re going for it on fourth down. They did, too. New England tackle Carl Davis jumped offsides, so we never saw the play (and, yes, you could say they might have employed a hard count until the clock ran out and punted). Former Dolphins coach Brian Flores ranked 29th in going for it on fourth down last year. that showed a fundamental lack of faith in the offense — and believing in the defense. McDaniel isn’t a go-for-it at anytime on fourth down. Facing fourth-and-4 near midfield in the second quarter, they punted. San Francisco, where McDaniel was offensive coordinator last year, ranked 21st in fourth-down tendencies. So McDaniel will pick his places, it seems. He picked a couple on Sunday.

4. It wasn’t all good news. The offensive line struggled much of the day against a good Patriots defensive line — and then left the day with health questions. First, right tackle Austin Jackson hurt his ankle in the first half and is replaced by reserve Greg Little. Then, Little had to come out on the first drive of the second half and that causes a reshuffling on the line. Guard Robert Hunt moves to right tackle and reserve Robert Jones comes in as guard. Then, in the fourth quarter, left tackle Terron Armstead went out of the game. Guard Liam Eichenberg moved to left tackle. Little was back in the game by that point and Jones moved to left guard. All that will take some sorting out before next week to see how serious the injuries are. The bottom-line needs improvement, too. The Dolphins ran 17 times for 45 yards until the final minutes run-out-the-clock possessions. Tua also was sacked three times on the day. So not only does this line need health — it need some improvement.

5. Tua Tagovailoa’s day? It was OK. A winning, C-effort. He had the good throw to Waddle for a touchdown. He also got away with a would-be interception and would-be fumble as the Dolphins were up 20-7 in the fourth quarter and trying to put the day away. He completed 23-of-33 passes for 270 yards and a touchdown. A good-enough effort on a winning day. But it wasn’t anything you left saying he impacted the game much.

6. Xavien Howard covered DeVante Parker for years in Dolphins practices. It typically went as you’d expect — as it did the first throw they faced in Sunday’s game. The Patriots opened the game with a nice drive when Mac Jones went to pass into the end zone from the Dolphins 22. It was a jump ball. Howard vs. Parker. Howard made a veteran’s move, pinning Parker’s arm. He tipped the ball into the air with his other hand. Jevon Holland picked it out of the air and the Dolphins had their first game-changing moment of the season. Parker did get a measure of revenge in the second half as he drew a holding penalty on Howard on a fourth-and-1 that kept alive the Patriots 92-yard touchdown drive to open the second half.

7. All those questions about the Dolphins cornerbacks? They didn’t show on a Sunday that suggested New England’s offense is really as lost as was said this summer. Or maybe the Dolphins defense is as good as hoped? Maybe both are true. The game effectively ended with undrafted rookie cornerback Kader Kohou making a big-time, fumble-causing hit on Nelson Agholor that the Dolphins recovered with five minutes to play. The fact the Dolphins defense gave up just one touchdown tells you of its day — and of the Patriots. One question for the Patriots entering this game was how an offense that replaced coordinator Josh McDaniels with some combination of Matt Patricia and Joe Judge will do. Sunday’s answer: They couldn’t take advantage of cornerback Byron Jones being out. Mac Jones was 21 of 30 for 213 yards, an interception and a touchdown. The Patriots ran 22 times for 78 yards showing the kind of strength the Dolphins had up front.

8. Stat of the Day I: The Dolphins have now won 25 straight games when leading at half, according to CBS. That’s the longest streak in the NFL and speaks to … exactly what? I don’t know, considering it has to go through the Adam Gase and Brian Flores eras. But it’s impressive.

Stat of the Day II: It was 92 degrees at kickoff (on-field it felt like 103 degrees). It was 93 degrees in the third quarter. Just five previous Dolphins games have been over 90 degrees, according to Dolphins records. The hottest? The 1995 opener against the New York Jets was 94 degrees at kickoff in a 52-14 Dolphins win. Question: Will the Dolphins home-field advantage benefit from global warming?

* The coaches didn’t believe what they were saying about cornerback Noah Igbinoghene all summer and preseason as they made him inactive for the opener;

* Armstead had the kind of impactful game that shows why he was a big commodity until he left in the fourth quarter. He can run block and pass block in dominant fashion — and move some as a screen pass was run his way in the third quarter;

* Mike Gesicki’s role is as diminished as the preseason showed. He had one catch for one yard and the play count will show he wasn’t used much;

* The Patriots played a lot of zone coverage Sunday. That was to be expected after they let top cornerback C.J. Jackson go to the Chargers in free agency.

10. Next week: Dolphins at Baltimore. The NFL’s toughest first month continues with a Ravens team that’s a lot healthier than when the Dolphins beat them last November. Lamar Jackson was intercepted once and sacked four times as the Dolphins (then 2-7) surprised Baltimore in a 22-10 win that effectively began their season’s turnaround.