Do I extend my mortgage term… or fix the rate?

I have a standard variable rate mortgage with an interest rate that jumps to 5.99% from next month – do I extend the term or fix the rate?

I have a standard variable rate mortgage with an interest rate that jumps to 5.99 per cent from next month.

What is my best course of action to alleviate the extra cost? Extend the loan term or opt for a fixed rate? S.D., Watford, Herts 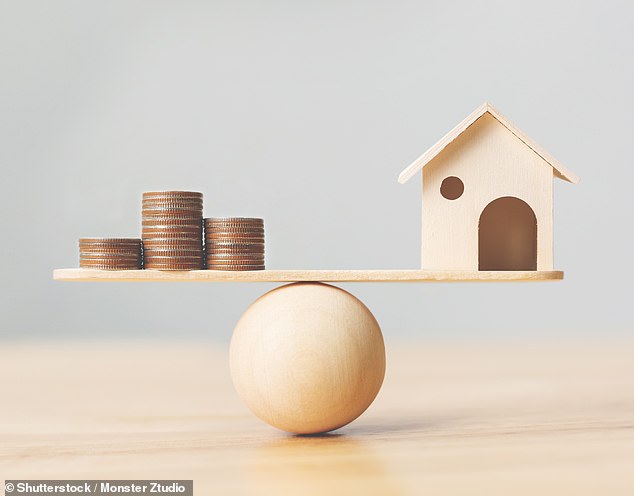 Balancing act: Since December, we’ve had six increases in the Bank of England’s base rate and it will continue to rise as long as high inflation persists

Jeff Prestridge replies: The first step is to review your mortgage deal urgently. Standard variable rate loans are rarely a good option – especially when interest rates are rising as fast as they are now.

Since December, we’ve had six increases in the Bank of England’s base rate and it will continue to rise as long as high inflation persists.

A variable rate home loan provides no financial protection against higher interest rates. As sure as night follows day, any increase in base rate is fully reflected in a variable rate loan.

Banks and building societies may be slow to push up savings rates, but when it comes to mortgages they are trigger-happy.

By remortgaging on to a fixed-rate loan, you will reduce your payments. More importantly, you will lock down one of your biggest financial outgoings, giving you some budgeting security to offset the impending sharp hike in energy bills.

I asked David Hollingworth, mortgage expert at broker L&C Mortgages, to do some number-crunching on your situation. He says you will probably pay around £1,155 a month once the new mortgage rate of 5.99 per cent kicks in next month.

Of course, the savings would be even greater if the rate on your current loan rose to 6.49 per cent in the months ahead, thanks to another 0.5 percentage point hike in base rate. Your monthly saving from fixing would then be around £214.

This illustration assumes you have at least 35 per cent equity in your home – highly likely given you are nearly half way through your loan and it is set up on a repayment basis where payments pay a combination of interest and capital.

If you have less equity, the fixed rate deals are more expensive, although you should still be in a better situation than now.

As is typical across the industry, you would have to pay a fee (£490) to remortgage, but that cost would soon be wiped out by the savings made from fixing.

There are other fixed-rate deals besides five years. Two-year fixes are commonplace, as are those stretching for ten years. For example, Virgin Money is offering a ten year fix at 3.3 per cent – not much more expensive than the five-year First Direct deal.

Although ten years of payment certainty is enticing, Hollingworth says you need to ensure it dovetails with your future financial plans. He says: ‘Many fixed-rate loans carry early repayment charges, so you need to be confident you will stay the course.’

For example, such charges on the ten-year Virgin Money deal start at eight per cent of the outstanding balance – and then drop the longer the deal is held for.

When taking this key first step, you could also extend your loan term as you suggest.

This would reduce your monthly payments, although ultimately you would pay more interest over the long term. The table, left, gives you an idea of how extending your £125,000 loan would impact on both monthly payments and the total interest you end up paying.

Assuming a hypothetical payment rate of 3.5 per cent throughout the remaining 13 years of your mortgage term, your loan would cost just over £998 a month – and you would end up paying total interest of £30,766.

He explains: ‘When extending a loan term, a lender will need to be sure the mortgage is affordable now and in the future. If the term extends beyond someone’s anticipated retirement age, they may need some assurance that the borrower’s retirement income will be sufficient.’

So, getting off that expensive standard variable rate loan should be your priority. Extending the loan is of secondary importance.

The post Do I extend my mortgage term… or fix the rate? first appeared on News Platforms.