Dolphins’ early-season path to victory is through their play-making defense, not suddenly-promising offense – The Mercury News 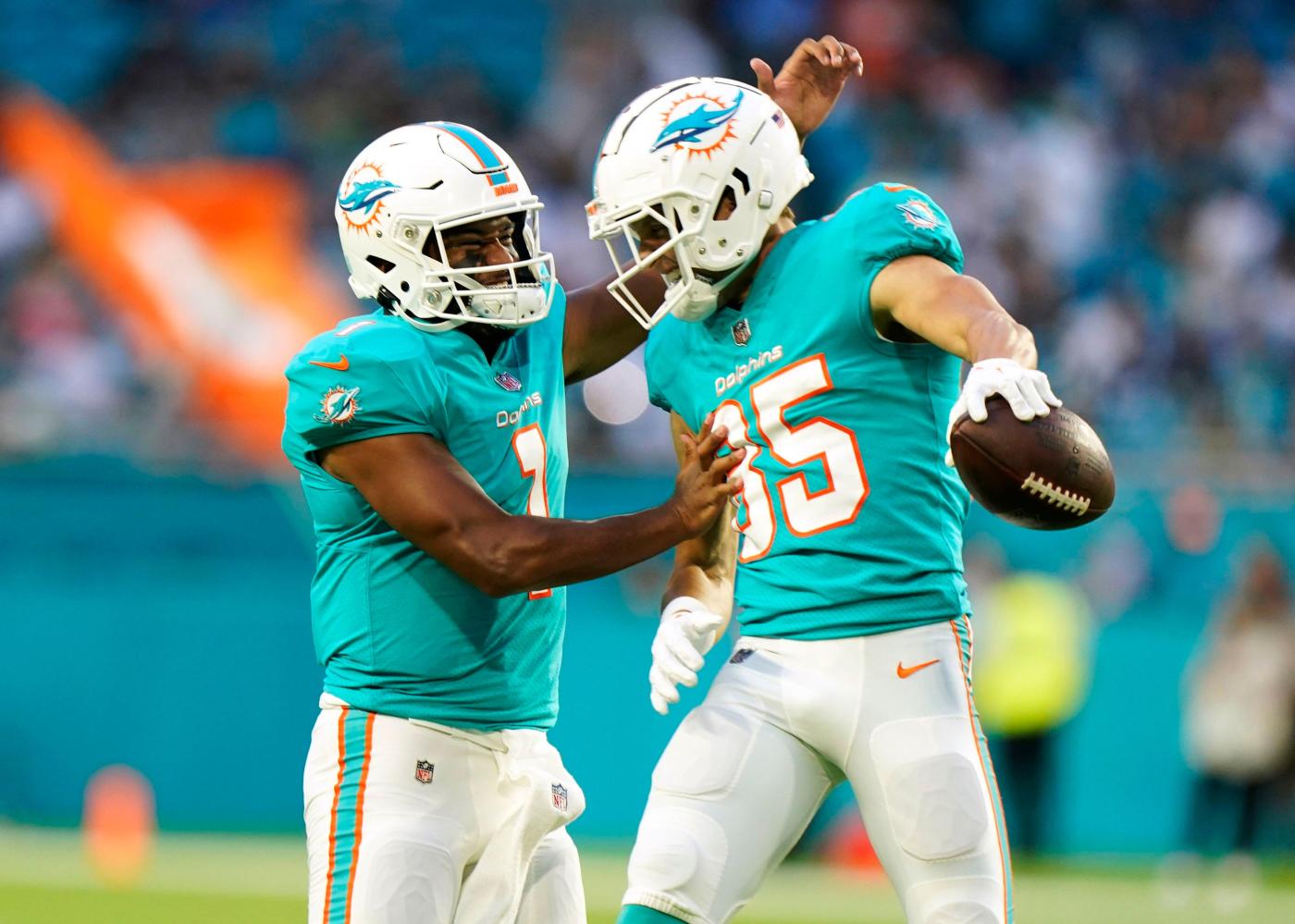 Second play, Tagovailoa went to Hill again, this time for a 13-yard gain.

Two plays after that, both running plays, Miami scored a touchdown.

Miami’s first-team offense, with first-year coach Mike McDaniel as its architect, was absolutely dazzling in Saturday’s 48-10 preseason finale victory over the Eagles at Hard Rock Stadium.

Tagovailoa must have had an inkling of the first play to be called. Running back Raheem Mostert said Tagovailoa asked him and fellow running back Chase Edmonds whether he should air it out to Hill on the game’s first play.

“We were like, ‘Bro, it’s preseason and just go ahead and do it,’ ” Mostert said. “And then sure enough he did. I’ve got to respect Tua because he’s a man of his word.”

But here’s the question: do you trust what you saw from Miami’s offense for one quarter of a semi-meaningless preseason finale when Philly was playing mostly backups?

In an NFL era where it’s more important to show well in joint practices, Miami’s offense was decent in two practices against Tampa Bay and pretty good in one practice against Philadelphia. Both Tampa Bay and Philadelphia could make the playoffs this season.

However, I need to see more from the Dolphins offense.

I’ve still got more faith in the Dolphins defense being the more consistent play-making unit, at least early in the season.

You saw evidence of that again Saturday when safety Elijah Campbell had the 30-yard pick six in the second quarter to give the Dolphins a 24-0 lead.

This is the same Campbell who sparked Miami’s best preseason stretch, which came against Tampa Bay in the exhibition opener.

In that stretch, you saw Miami’s early-season path to glory.

It was defense-led complementary football.

Two plays after that, Miami linebacker Darius Hodge sacked Bucs quarterback Kyle Trask, who coughed up the ball. Linebacker Sam Eguavoen scooped it up and rumbled 32 yards for the touchdown and the 20-14 Dolphins halftime lead.

Play-making is often a thread that runs through a unit. It’s a tone. It’s an expectation. Miami’s defense has it.

Phillips, who had 8.5 sacks last year as a rookie, didn’t necessarily endorse the idea of the defense carrying the offense early.

“It’s us feeding off of each other,” he said after Wednesday’s joint practice with the Eagles. “It’s us carrying each other. You don’t ever want to have a team that’s one-sided.”

I trust this defense. They have flaws, sure. They’re not a top-5 unit. But they can get the job done.

On Saturday, however, the offense took steps toward changing my thinking about how well it could play early in the season.

Tagovailoa, who was good in preseason and joint practices, only played the first quarter against Philly, but he was 6-for-7 passing for 121 yards, one touchdown, and a perfect 158.3 passer rating.

His decision-making was sharp — some nitpickers say the deep pass to Hill was a touch underthrown and could have been a touchdown, or Tagovailoa held the ball too long and took a blind side sack — and his performance was encouraging.

Hill, who only played one series, ended with two receptions for 64 yards.

The running game didn’t have any negative plays, and in fact, Mostert had a 26-yard gain.

“We’ve been doing that in practice for weeks,” right tackle Austin Jackson said. “It was good to do it live where everybody could see.”

And the offense didn’t even have two key pieces in wide receiver Jaylen Waddle and left tackle Terron Armstead.

Still, we needed to be excited, teased, tantalized by Miami’s offense in preseason. It happened Saturday, but it didn’t happen enough in preseason.

Here’s what we know: The Dolphins offense, sparked by Hill and Waddle, and under the direction of Tagovailoa, is supposed to be explosive, multi-dimensional, and tough to defend. We’ve only seen that on rare occasions so far. It remains a work in progress.

But at least after Saturday, there’s more of a possibility the offense is force right out of the gate in the regular season, just as it was against the Eagles.