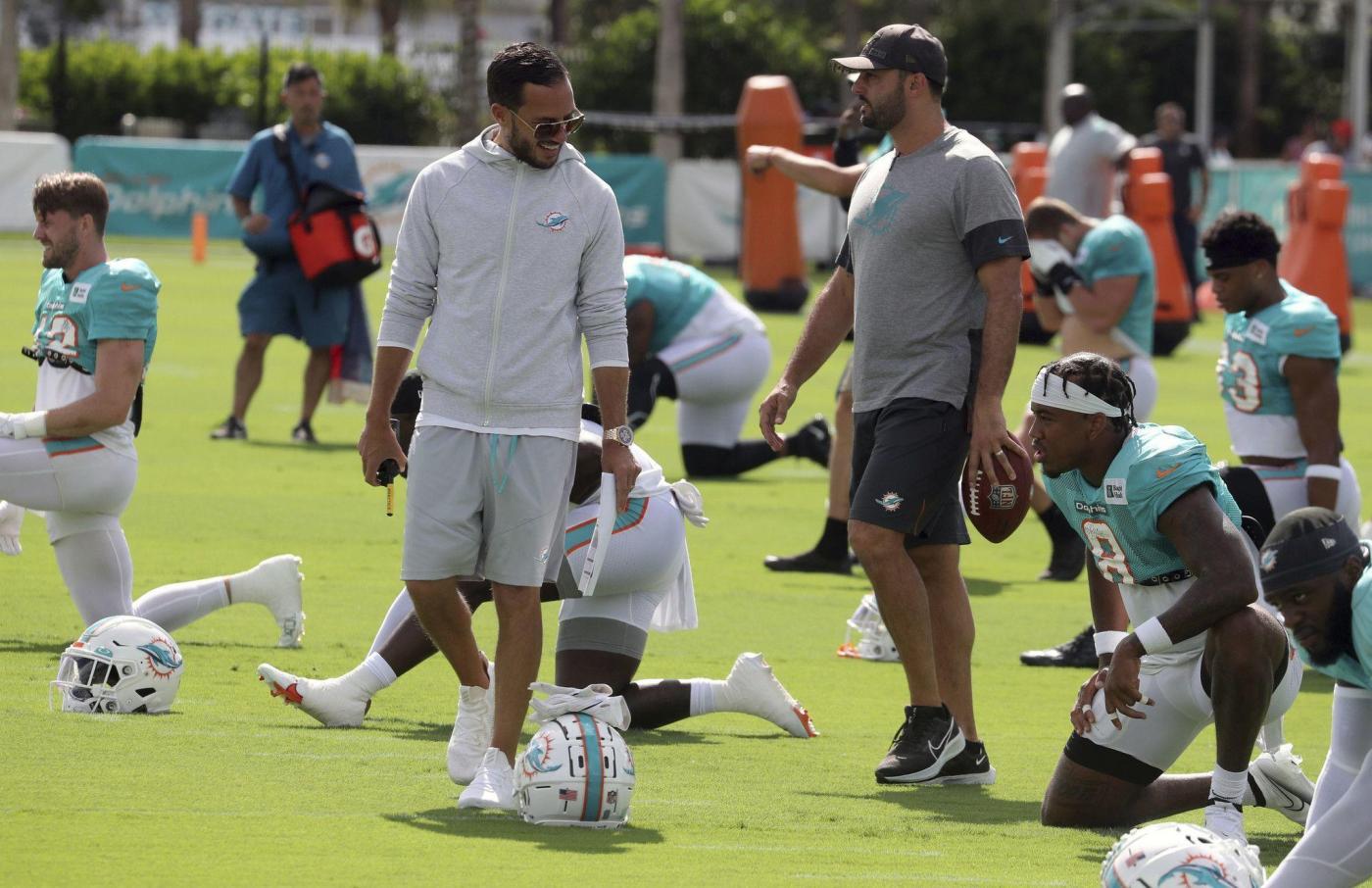 The Miami Dolphins may have lost their final practice of training camp due to what coach Mike McDaniel dubbed “stomach bug-gate,” but they still have their preseason finale against the Philadelphia Eagles on Saturday night to serve as a vital exhibition for players battling for final roster spots.

The Dolphins canceled their scheduled joint practice with the Eagles on Thursday amid a spreading stomach bug affecting a number of players with the hope of keeping the team healthy for Saturday’s game, allowing those roster hopefuls the opportunity of a lasting impression before cut-down day.

“For a lot of guys, it’s the most important game of their career, and I hold a strong amount of value to that and didn’t want to compromise that in any way,” McDaniel said on Thursday of the decision.

Indeed, there are difficult decisions on tap for McDaniel and his coaching staff between Thursday and Tuesday’s 4 p.m. deadline for NFL teams to trim rosters from 80 players to 53.

“There’s some jobs to be settled,” McDaniel said. “We have more NFL players than spots. That’s the bottom line.”

Everything players have done on and off the field from organized team activities and minicamp through training camp and Saturday’s preseason finale will be assessed in determining the players who will survive the final cut. It could even sometimes come down to how a player responds to unforeseen circumstances like the team experienced on Thursday.

“That was an unintended consequence of the Zoom meeting this morning,” McDaniel said of the virtual meeting the team held, which had become all too familiar for teams during two seasons played amid heightened COVID-19 protocols. “Guys were in the tank. Guys wanted to practice. Guys were doubling down asking to come into the building.”

“Every circumstance that you incur, there’s something to be gathered from it,” he said after finding certain players were extra eager to hold some kind of team activity Thursday. “I learned that they wanted to be in the building. I thought that, but you don’t know until you see their faces and they’re just like, ‘Well…’ and I’m like, ‘Relax.’

“It was tough on all of them. I think they’re all aware that there are opportunities missed. But in turn, they are also feeling the responsibility of, ‘OK, well I better use this day to rest, recover and also make sure I am completely square on all responsibilities that I’m going to be held accountable for on Saturday.’”

Most Dolphins likely have a good idea of their fate at this point. More than half of the remaining 80 players know they have their spot locked up. Several roster longshots have to have some awareness of where they stand. Then, there are those in between.

Those can range from upstart undrafted rookies to veterans who have experience on NFL rosters, but could be on a career decline or simply in a crowded position group.

Undrafted cornerback Kader Kohou is an intriguing player at an injury-depleted position that needs someone to step up and provide depth.

“Most definitely I feel like I belong,” said the 5-10, 195-pound defensive back from Texas A&M-Commerce who got $130,000 guaranteed in signing with Miami, including a $30,000 signing bonus. “I’m just going to have to show you all. We’ve got a preseason game coming up. I’ll let my play do my talking.”

Kohou, who hails from Ivory Coast, said the biggest adjustment from his small Southland Conference school to the NFL has been a defensive playbook that went from 15 plays to 70 or 80. But aside from that, it’s just football.

“I wouldn’t say there is a dramatic difference,” Kohou said. “I’m picking [the playbook] up as we go along, but it’s football at the end of the day. Just more fans in the stands. Way more.”

McDaniel has a decision to make on whether to keep a third quarterback on the 53-man roster after rookie Skylar Thompson, a seventh-round draft choice from Kansas State, has impressed during the preseason.

How do active-roster holdovers from the Brian Flores era fit into what McDaniel wants to do?

Where do running backs Myles Gaskin and Salvon Ahmed fit after Miami signed Chase Edmonds, Raheem Mostert and Sony Michel as tailbacks in free agency? What can the team do with wide receiver Preston Williams, who has been invisible all camp and the subject of trade rumors? Can guard Solomon Kindley, a starter in 2020, salvage a spot for himself in a different blocking scheme? Between a slew of viable edge defender options — Brennan Scarlett, Porter Gustin, Darius Hodge and seventh-round rookie Cameron Goode — who can prevail?

“I think the 53 is for the 53 best players,” McDaniel said on Sunday of the upcoming decisions, when asked specifically about the Thompson possibility at quarterback. “You’re open to whatever. You have to consider a lot of different things and sometimes that leaves you short or heavy in certain positions, but what I’ve found in my career is that you don’t pigeonhole yourself and make absolutes. You’d like to carry a certain amount of players and you’d like to have your cake and eat it, too, but when individuals’ performances merit it, you have to keep the 53 best players.”