Emma Raducanu reached the quarter-finals of the Korea Open after easing to a 6-3 7-5 victory over Belgium’s Yanina Wickmayer.

The British No 1 and tournament sixth seed took one hour and 40 minutes to continue rebuilding in the wake of her recent first-round exit from the US Open, the event that propelled her to stardom last year.

Last week’s Slovenia Open only lasted a round longer, but in Seoul she displayed the resolve needed to overcome a fightback from Wickmayer as a 4-1 lead in the second set ebbed away. 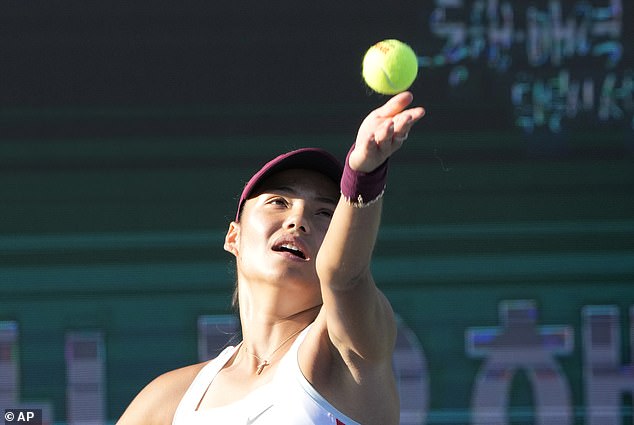 Former world number 12 Wickmayer had dropped to 460 in the rankings after taking a spell out of the game following the birth of her first child in 2021, but she was a dangerous opponent who grew stronger in the match.

Raducanu, who faces Magda Linette of Poland in the last eight, was unable to make the most of a break point in the third game but she dominated the fifth, winning without dropping a point to gain a crucial foothold in the opening set.

Yet her earlier composure deserted her when next serving and she doubled faulted at the crucial moment to concede the lead.

But Wickmayer wobbled on her serve once again and Raducanu took full control of the ninth, taking the set through a mixture of commanding shots and errors from her opponent. 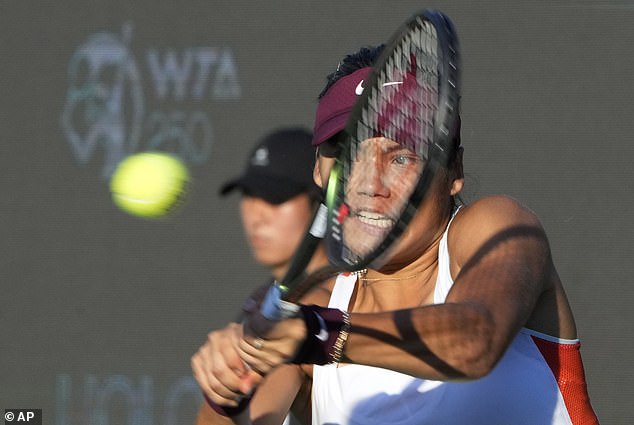 It took grit, an ace and an excellent forehand for Raducanu to preserve her advantage as the second set opened with an 11-minute game and in a flash she had eased 3-0 ahead.

A collapse followed as 3-0 became 4-3 and despite a superb backhand passing shot executed on the run, Raducanu was coming under heavy pressure from the determined Belgian.

Every point had become a battleground but match point arrived in the 12th and when Wickmayer sent a shot long, she was through to the last eight.

Raducanu had spoken earlier on Wednesday about how she is trying to ‘build up physically’ for 2023 and how training has been going with coach Dmitry Tursunov.

She said: ‘Last week I struggled a bit with my legs, just doing a lot of training, and as I said, the rest of this year is just really trying to build up physically for the next year,’ she said. 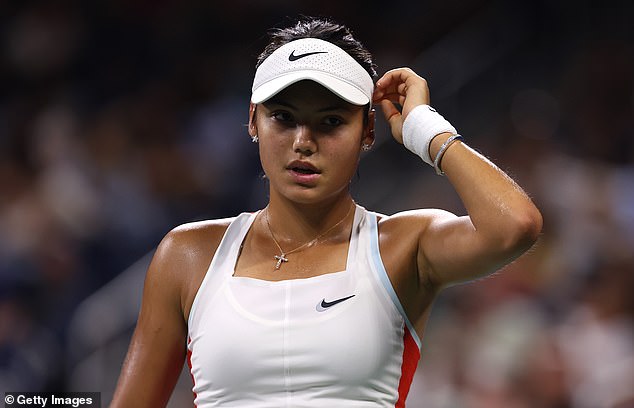 ‘So I’m training a lot – like before the match today I did 90 minutes on the court, and I’m just trying to get myself in good shape.

‘And that comes sometimes with small niggles. At the moment it’s something I’m just managing, but I know it’s for a greater benefit so I’ve kind of bought into that process.

‘I have definitely done more since starting with Dmitry. I have done a lot more hours, and that’s something he and the other people in my team think is quite necessary, and myself included, just getting more robust, so long matches, or matches in a row, don’t affect me.

‘And I think also just not trying to over complicate things for myself, he’s helping with that, because sometimes I enjoy doing that, thinking of worst possible outcome, and just over-thinking it. So he’s also trying to help me become more easy-going.’