Household energy debt has hit at an all-time high of £1.3billion – nearly three times higher than it was in September, new data shows.

Six million households are already behind on their energy bills by more than £200 since Ofgem’s price cap hike last April, the research from Uswitch claims.

An additional 8million bill-payers were also reported as having no credit balances, meaning a total of 14million households are likely to have little protection from financial hardship this winter. 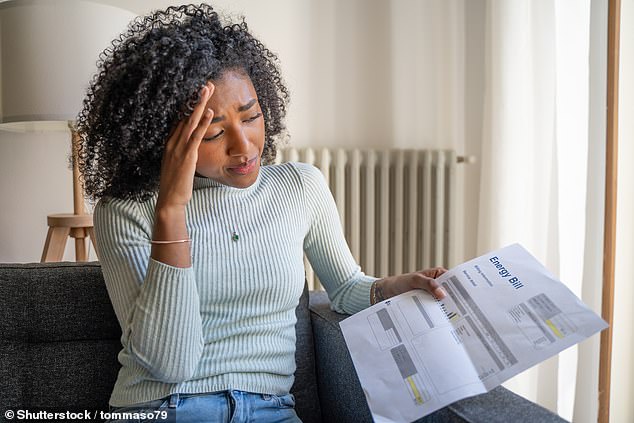 Energy debt is now the most common form of debt, and with six million households currently in more than £200 of debt with their energy firm, the future looks bleak as cost continue rising

Debt charities have also called for more support from the Government after energy arrears became the most common debt type for struggling households.

Despite growing anxiety around soaring energy bills, only 6 per cent of billpayers have considered asking suppliers for help.

Two in three Britons don’t trust their energy providers, believing they are ‘out to rip them off’, while two in five think suppliers just make up the numbers on bills, research by Sagacity shows.

But as household energy debt increases, concern grow for how struggling households will be able to manage their debt and pay for their essential utilities.

This has led to people trying to ‘game the system’ – almost one in ten are reportedly considering entering a false meter reading to reduce their bill.

Some are suggesting struggling energy households should only pay for what they can and calling on customers to reduce direct debit in the coming months and not building up credit with their provider.

This, however, could prove catastrophic for struggling households when bills increase from October.

Just popping in on the energy price cap news to say that if your energy company won’t let you change your direct debit, you can cancel it. Note down the banking details and reference number and set up a standing order for the amount you ACTUALLY use/can afford instead.

This is Money editor, Simon Lambert, says the backlash against rising energy prices is rapidly gathering steam, but is urging people to consider how energy direct debits work before reducing them.

He said: ‘It’s worth noting your direct debit is spread out over the year so you overpay in summer to help with winter, and I’d be very careful about believing all the stuff you read on social media.’

The consequences for those looking to withhold their energy payments with campaigns like Don’t Pay are potentially severe, with experts warning that energy firms can, and will, cut off power to those not paying for the energy they have used.

Others online have also suggested that if customers raise a complaint with their energy provider, they can’t begin the debt collection process or cut off your power if you don’t pay for your bills.

TikTok users have suggested that it’s fine to not pay for your energy bill, as long as you do it the right way, but leading solicitor, Paul Britton, has said this is a ‘disaster waiting to happen’.

He said: ‘Encouraging people to stop paying their bills and then registering complaints is a disaster waiting to happen and will likely only “kick the can down the road”.

‘Whilst it may prevent the immediate issue of being cut-off, it does not stop arrears being accrued and the energy supplier commencing legal action against the individuals refusing or unable to pay.’

> Guide: How to save money on energy and what you need to know about your bills

Tara Flynn, from comparison website Choose Wisely, added: ‘Although this sounds like a good hack, making a complaint to your provider won’t stop what you owe from building up.

‘The longer you don’t pay your bills, the worse your debts will become and the more you risk serious consequences.

‘Most providers aim to satisfy complaints within eight weeks, but the energy crisis isn’t going away anytime soon.

‘We’re likely to pay higher energy bills well into the new year, so all complaining would do is temporarily delay the problem’.

‘The consequences of not paying your energy are far reaching and could wreck your credit score, and reduce your chances of accessing credit in the future, for example, when buying a house.’ 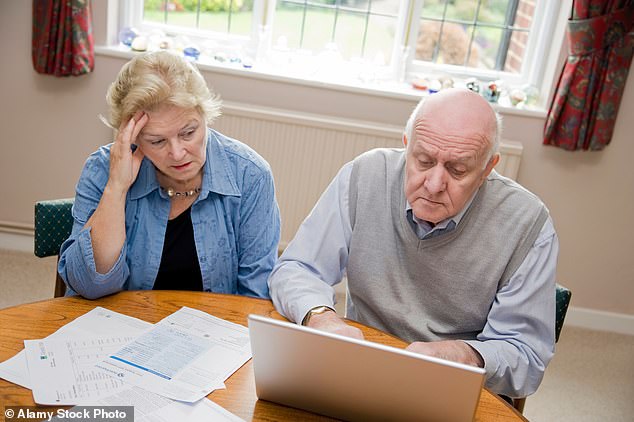 Despite growing concerns for soaring energy bills, only 6 per cent of billpayers considered asking suppliers for help, as two in three believe energy firms are trying to rip them off

Imran Hussain, director at Harmony Financial Services said: ‘Anyone considering not paying their utility bills and who thinks they’ll be able to purchase a home within the next few years may as well forget about it, especially if they have a small deposit.

‘Not paying your energy bills will be curtains for your credit score.

‘As the economic climate deteriorates, any blips on credit files will impact who will actually lend to you and it’s also a slippery slope as all it takes is a few missed payments to end up with a default or CCJ.’

Doug Miller, director at independent mortgage broker, Lansdown Financial Services added: ‘Whilst I understand, and fully support, the need to take a stance against soaring energy prices, Don’t Pay UK should be stopped in its tracks immediately.

‘Destroying your credit profile should be the last resort. Even one missed payment impacts your ability to obtain a mortgage.

‘The trade-off here is potentially saving up to £100 per month on the average household energy bill, but seeing your mortgage payments soar by hundreds of pounds per month because your credit rating has plummeted.

‘How can this be considered a good thing? Banks don’t care if you are ‘making a stand’.

‘If you miss one payment or more you will potentially end up paying higher interest rates not only on new credit cards, loans and car finance, but also life’s biggest debt, your mortgage.

‘Education is vital, and Don’t Pay UK have absolutely no warnings about the ramifications of what they asking millions of UK households to do. It’s shambolic.’

Britton added: ‘When the Christmas period arrives, when people are often struggling for money, the increase in energy bills could be unmanageable and the constant threats of legal action from utility providers might put a dampener on the festive spirit.

Destroying your credit profile should be the last resort. Even one missed payment impacts your ability to obtain a mortgage.

‘Consumers need to fully understand the consequences of not paying their full bill before embarking on any of the proposed campaigns.

‘The advice is, if you can afford to pay then you should so as to avoid and stress and legal action from your utility providers.

Justina Miltienyte, head of policy at Uswitch, said: ‘Energy debt has hit an all-time high with the worst possible timing, turning this winter’s energy price hike into a deeply precarious situation for many households.

‘This suggests the cost-of-living crisis is already squeezing budgets dramatically, even during the summer months, as families struggle with rising bills in all areas.

‘If you are behind on your bill payments, or your energy account is going into debt, speak to your provider as soon as possible.

‘They should be able to help you find a solution, such as working out a more affordable payment plan. You may also find you are eligible for additional support such as hardship funds and other energy help schemes.

‘The Government also needs to take energy debt seriously ahead of the winter – and a greater support package for vulnerable households needs to be agreed as a priority.’