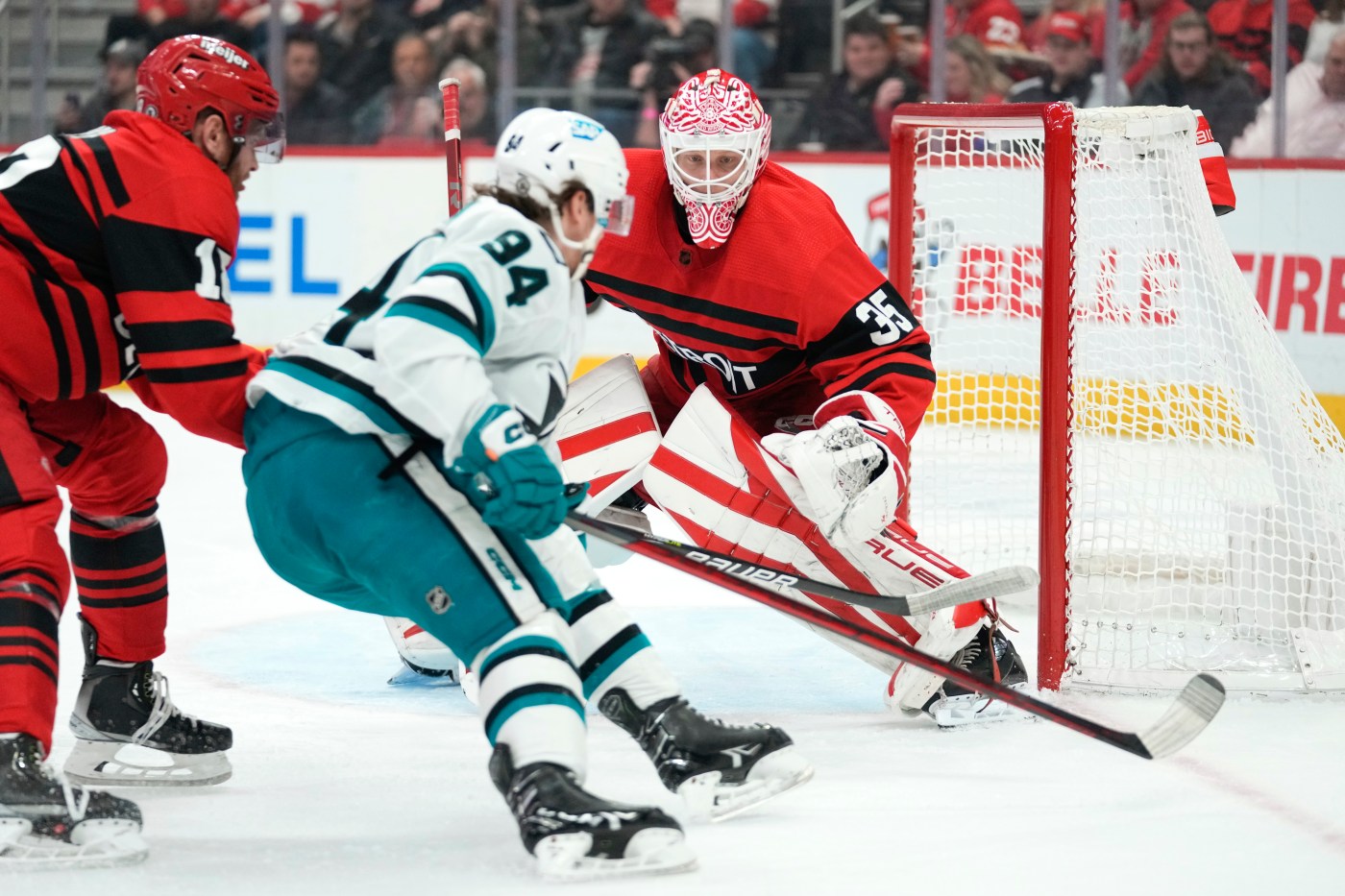 The San Jose Sharks remained winless on their road trip against Eastern Conference teams, as Andrew Copp scored 25 seconds into overtime to lift the Detroit Red Wings to a 3-2 at Little Caesars Arena on Tuesday.

Goalie James Reimer made 27 saves in regulation time and three more in overtime before Copp’s goal, as the Sharks fell to 0-2-1 on their five-game road trip that concludes with games against Carolina on Friday and Pittsburgh on Saturday.

The Sharks (14-25-10) began the trip with regulation-time losses to Columbus and Boston on Saturday and Sunday, respectively.

The Sharks and Red Wings were tied 2-2 after the first two periods as Erik Karlsson assisted on even-strength goals by Timo Meier and Logan Couture.

Meier scored his 28th of the season at the 7:58 mark of the second period. His first shot after he received a pass from Karlsson was stopped by Detroit goalie Ville Husso, but he collected the rebound, skated around the Red Wings’ net, and scored on a wraparound try, giving him his fourth goal in five games.

The Sharks were down 2-1 late in the second period before they sent a flurry of pucks toward Husso. After a Karlsson shot attempt was blocked, Couture, stationed to the left of the net, batted the rebound past Husso with 6.9 seconds left in the period for his 17th goal of the season.

Karlsson now has 49 assists and 64 points in 49 games this season.

Reimer, making his fourth start in the last five games, had 17 saves in the first two periods.

Sharks winger Kevin Labanc had seven shot attempts in the first two periods Tuesday as he played his first game since Jan. 13, when the Sharks were blasted 7-1 by Connor McDavid and the Edmonton Oilers.

After that loss, Labanc, 27, sat out the Sharks’ next game against the New Jersey Devils three days later, as he was replaced on the second line by Mikey Eyssimont.

Labanc was also scratched for games against Dallas, Columbus, and Boston, and the Sharks went 1-2-1 in his absence – outscored 16-11 in those four games and going a combined 2-for-9 with the man advantage.

It was the most consecutive healthy scratches Labanc has had in the NHL since his pro career began in 2016.

“I’m still part of the team,” Labanc said last week. “I know that I can put the puck in the net and I know I can help the team win. So it’s just a matter of time.”

Labanc, who has 10 goals and 25 points in 43 games this season, started Tuesday’s game with familiar linemates Tomas Hertl and Meier.

After their 4-0 loss to Bruins on Sunday, the Sharks also had wingers Eyssimont and Alexander Barabanov with Couture, and Steven Lorentz on a line with Noah Gregor and Oskar Lindblom. Nico Sturm was with Nick Bonino and Matt Nieto.

The Sharks scratched forwards Jonah Gadjovich and Evgeny Svechnikov and defenseman Scott Harrington. Defenseman Matt Benning, who was under the weather Sunday and did not play against the Bruins, re-entered the lineup and was paired with Marc-Edouard Vlasic.

The Red Wings (20-18-8) had won just one of their last five games before Tuesday.