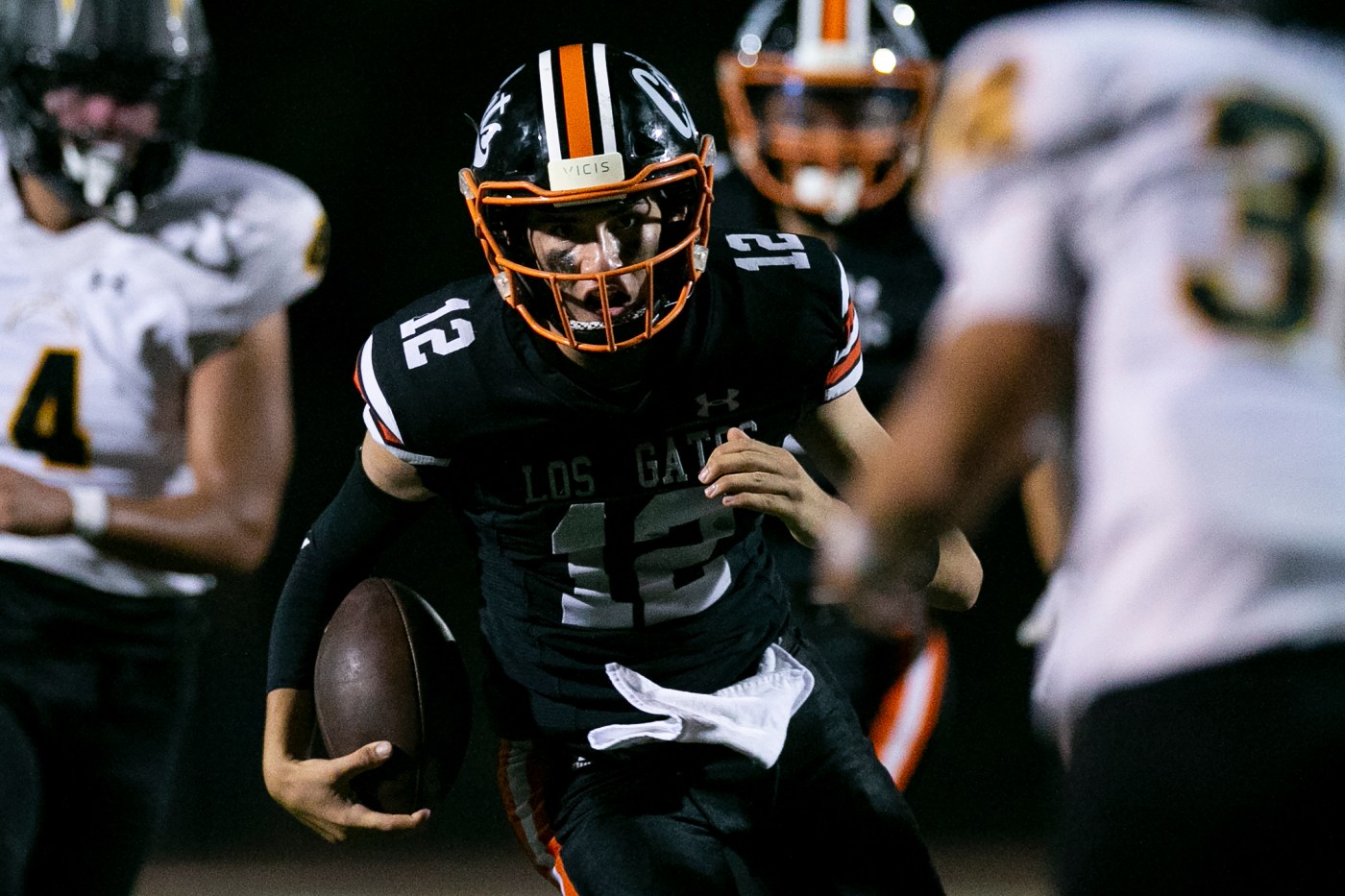 What to expect: Even with the merger of the Peninsula and Santa Clara Valley leagues, the De Anza Division remains almost identical to last season. Santa Clara is off to the El Camino Division, but the other six teams return. For the fourth season in a row, it appears the Oct. 21 contest between Wilcox and Los Gatos will settle the title. The home team, Los Gatos, is the favorite. Doesn’t hurt that the Wildcats have 12 starters back, six on each side of the ball. They will be trying to erase the sting of a 34-27 loss to Bellarmine in the first round of the CCS playoffs after a perfect regular season. Senior QB Jake Boyd threw for 1,887 yards and 22 TDs last year. Most of his top receivers graduated, but he does have two inviting targets in senior Landon Heard and junior Jaylen Thomas. Heard was a first-team all-league DB in 2021. Emiliano Mejia, the Cats’ leading rusher (909 yards) is back. He averaged a touchdown per game last season. Junior Ryan Vernale, an excellent two-way lineman, also returns. Vernale will be accompanied on the defensive line by Nick Ramos. He only measures 5-10, 185, but he was second-team all-league last year, so he obviously plays much bigger. Luchi Casale (6-2, 220) is moving back to his natural position at middle linebacker. He’s fast, physical and smart, with a watch list of colleges that include Cal, Boise State and several Ivy League schools.

What to expect: Wilcox is the other De Anza heavyweight. The Chargers reached the CIF State 2A final last year before losing by a field goal to Scripps Ranch-San Diego. They return first-team all-league QB Armand Johnson. The senior passed for 1,653 yards and 19 TDs, and ran for an additional 612 yards. Leading rusher Luther K. Glenn is gone, but Andrew Palacios contributed 1,042 yards and 12 TDs on the ground in 2021. The offensive line has plenty of muscle with three second-team all-leaguers in Madden Amituanai (6-3, 260), junior Justin Hylkema (6-7, 300) and Santiago Maes (6-1, 250). Maes also is a very productive defensive end. The Chargers’ defense also has three-year starter Daniel Escorza at free safety and junior Jeremiah Lewis at linebacker. Escorza had 119 tackles last season and Lewis had 91, so you know they’ll be around the ball. Wilcox could be undefeated by the time it visits Los Gatos on Oct. 21. Visiting Valley Christian is a tough way to start the season, but the biggest test before Los Gatos could be the Sept. 23 home game against Menlo-Atherton. No word on whether M-A’s newest add to the roster, WR Jurrion Dickey, will be eligible by then.

What to expect: No team in the De Anza Division might be more unpredictable than the Mustangs. In his first 10 seasons as Homestead’s coach, Milo Lewis is 50-52. Four of those campaigns have produced at least seven wins. Four others produced at least seven defeats. The last two years have been a little different. Homestead was 7-6 in 2021, advancing to the CCS Division IV championship game before losing to Sacred Heart Prep. During the Covid-shortened season in the spring of 2021, the Mustangs were 2-3. This year? The five De Anza coaches participating in a Bay Area News Group survey had Homestead scattered from third to sixth. The Mustangs do have depth at the skill positions. Getting the most notoriety is junior TE Wyatt Hook, who measures 6-6, 235 and already has offers from Oregon State and Hawaii. Colorado is also keeping a close eye on Hook, who caught 19 passes for 212 yards a year ago. Senior Charlie Castaneda returns at QB. He threw for 1050 passing yards last season. Lewis is very high on senior FB/ILB Zack Acton, who is always around the football on defense and rushed for almost 400 yards as a junior. A player to watch is junior Maxx Ward, who adds speed to the running game and defensive secondary. The Mustangs will not be easy to pass against with Sammy Ahmad and Jordan Rucker also in pass coverage.

What to expect: New coach. Familiar face. David DeGeronimo replaces Nelson Gifford as the Vikings’ head man. DeGeronimo spent the last three years at Los Altos, where he was 14-13, but he had two previous stints as an assistant at Paly. The Vikings are coming off two subpar seasons, but they have an experienced senior class and some talented juniors. All-league center Vainga Mahe anchors an offensive line with three returning starters. Junior Ikinasio Tupou returns at left tackle and already has an offer from San Jose State. Juniors Jeremiah Madrigal and Jack Newman are the lead candidates at running back. Newman is a rugby player, and that alone should make him tough to bring down. Paly will need to replace QB Danny Peters and a deep set of receivers. Tupou and Nicolas Dorigatti lead a strong front seven. Tupou measures 6-6, 255 and Dorigatti is a solid 6-0, 223-pounder who also plays tight end. DeGeronimo is very excited about sophomore Je’meer Cooper. He’s inexperienced but loaded with skill. Paly should get a pretty good read on what it has in the first two games, a visit to St. Ignatius and the home opener against Leland. Visits to arch-rival Gunn and Menlo School are up next before the start of league play.

What to expect: New coach Tim Lugo will be a busy man on the Mountain View campus. Originally hired away from Saratoga to be the Spartans’ athletic director, he has added football coach to his expanding responsibilities. He is fired up. “The program is coming off a CCS semifinal and the first playoff win in over 20 years, so there’s excitement,” he wrote in a Bay Area News Group survey of football coaches. A 28-21 road victory over Live Oak in the first round ended an eight-game CCS playoff losing streak. Mountain View lost a ton of starters from last season, and not a single all-leaguer returns, but the Spartans have a young offensive line that Lugo thinks will benefit from the multiple spread offense he is installing. On defense, he has an experienced secondary that he’s counting on to help the young linebackers. One of the more recognizable names on the Mt. View roster is junior running back Dillon Daniels. He played in eight games last year, and rushed for 323 yards and five TDs. He went over 100 yards in a game twice. He’s not a bad receiver, either, Lugo wrote. Wideouts Drake Wilkening and Din Alaee, and TE Andre Guimaraes give the Spartans at least three potentially reliable receivers. Senior Kevin Conway appears to be the leading QB candidate. Two-way lineman Luis Roque returns as a starter on the offensive line. The Spartans open on Thursday night, Aug. 25 at King’s Academy, then play Archbishop Mitty, Sacred Heart Prep and Half Moon Bay before beginning PAL/SCVAL competition. It’ll be a challenging schedule for a young team.

What to expect: The Trojans went 3-13 over the last two seasons, and their struggles may not be over yet. All-league quarterback Tyberius Egorerua is no longer on the team, so senior Zae Mims is the new signal-caller. He was a part-time OL/DL in 2021, and certainly looks the part at 6-foot-2, 240 pounds. Milpitas was 115-39-1 from 2008-2019, but things have changed for veteran coach Kelly King. “Numbers are down,” said long-time Trojans assistant Vito Cangemi, adding that it’s not just at Milpitas. “I think there is still a Covid hangover.” The Trojans’ strength could be at linebacker, where Jacob Choates and Michael Fong will be counted on to make a lot of plays. Fong and Jasiah Keahi will give Milpitas a solid presence on the offensive line. Of course, Mims could do some of his own blocking. King and his staff could know after two games what kind of potential his team has. The Trojans open the season against two opponents from the powerful East Bay Athletic League. They’re at Dougherty Valley on Aug. 26, then host California the following week.

The Bay Area News Group’s high school football preview package will continue to roll out this week. If you have not already, please subscribe.