Lee MacDonald, 52, was the star of one of Grange Hill’s most hard-hitting storylines when his character Zammo became addicted to heroin.

As a result, he became involved in a number of anti-drugs campaigns encouraging youngsters to ‘Just Say No’.

After six years as Zammo, Lee left Grange Hill with critical acclaim for his portrayal of Zammo.

Lee had always had an interest in boxing and continued to develop his skill to a high level but unfortunately a car accident in the early 1990s left him unable to pursue the sport. 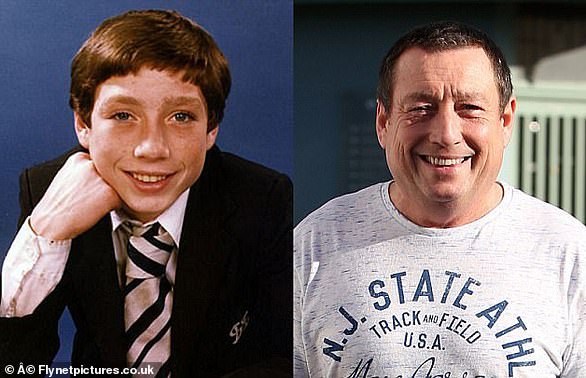 Lee MacDonald as Zammo who was the star of one of the series’ most hard-hitting storylines when he became addicted to heroin. Now 52, he runs a locksmith business and continues to appear on TV as himself on shows such as Celebrity Pointless 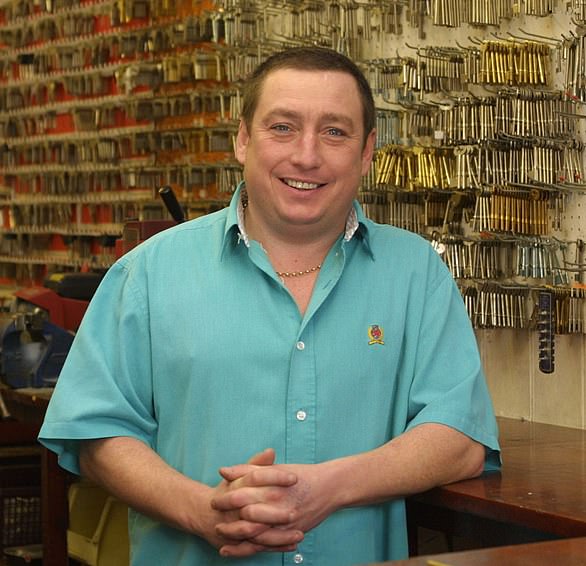 Lee had always had an interest in boxing and continued to develop his skill to a high level.

Unfortunately, a car accident in the early 1990s left Lee unable to pursue with the sport.

Lee has made several TV appearances since leaving Grange Hill, including an episode of The Bill in which his love interest was played by Melissa Wilkes – who also played his girlfriend Jackie Wright in Grange Hill.

In April 2019, it was announced that he would appear in the BBC soap opera EastEnders as Terry.

He remains in the public eye appearing as himself on shows such as Celebrity Scissorhands and Celebrity Pointless. He also runs a locksmith business in Wallington, Surrey.

Todd Carty, 57, remains one of the show’s most famous alumni having remained on TV screens since the first series aired in 1978. His Grange Hill character was so popular, he was given his own spin-off show Tucker’s Luck from 1983 to 1985.

He then starred as Mark Fowler in EastEnders from 1990 to 2003, with a groundbreaking storyline when his character was diagnosed with HIV.

But after his departure from the square, he played away from type portraying the villainous PC Gabriel Kent in The Bill. 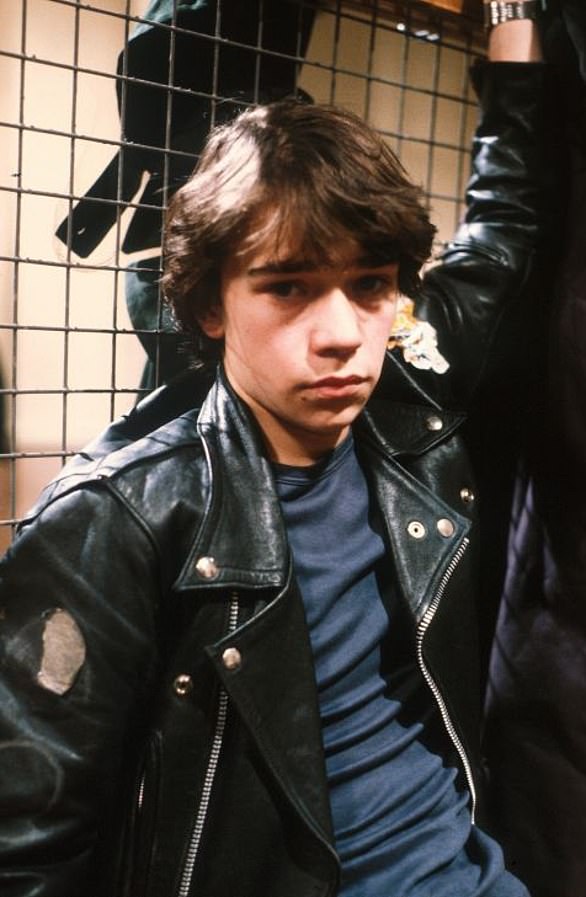 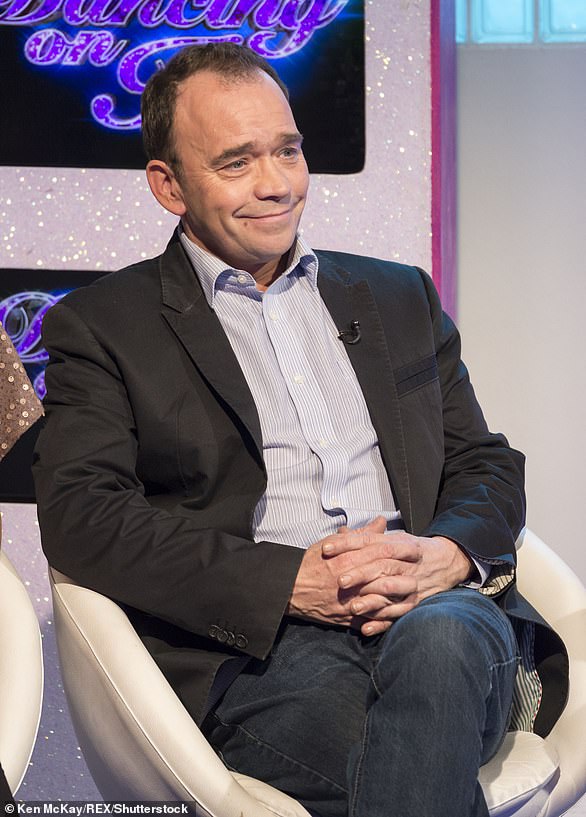 Todd Carty went on to have a successful career in several television soaps, including Eastenders

Plotting a deranged revenge plot on the mother who gave him away involving incest and raping a colleague, psychopathic Gabriel became a serial killer and eventually committed suicide.

As well as continuing to act on stage and screen, he’s also delved into producing and directing and made a memorable appearance on Dancing On Ice in 2009 because of his lack of flair.

His uncoordinated moves became a ratings draw and in one routine he accidentally skidded through the exit. 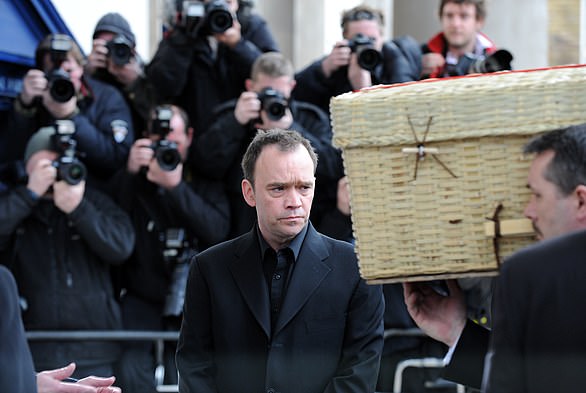 As well as starring in panto, he appeared on Celebrity Masterchef in 2014 and

In 2015, the actor and his eldest son James filmed a documentary, Dangerous Adventures For Boys, for Channel 5 based on the book by Conn and Hal Iggulden

Carty and his eldest son, James, filmed together in a factual television series for Channel 5, Dangerous Adventures For Boys, based on the book written by Conn and Hal Iggulden

Most recently, he appeared in the film Silver Birches in 2017 about an author struggling to rebuild his life after the untimely death of his wife.

Todd has been with his childhood sweetheart Dina Clarkin since 1990, and they have two sons James and Thomas. 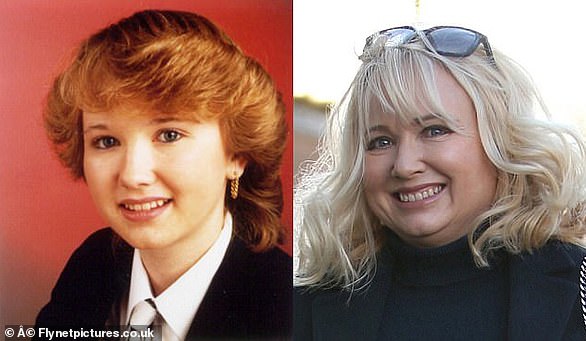 Actress, entrepreneur and PR boss Paula-Ann Bland played edgy Claire Scott in the hit show, who had a crush on teacher Mr Hopwood

Paula-Ann’s edgy character Claire caused a stir by fantasising about teacher Mr Hopwood in her diary, who was then attached by her overprotective father.

She also enjoyed a romance with Stewpot, before discovering he was seeing Annette Firman behind her back.

Because of her success on the small screen record company bosses eyed Paula-Ann as a potential British Kylie and she even released a cover version of The Locomotion.

She left the series in 1985 and continued to act, appearing in TV series such as Spender and Only Fools and Horses.

In 1988, she caused a stir by posing topless for men’s magazine Mayfair.

During the ’90s she turned her back on acting and opened shoe shops called Paola in Knightsbridge and Chelsea before starting her own PR company.

She’s a mother-of-two and is also an ambassador for the Good Grief Trust. 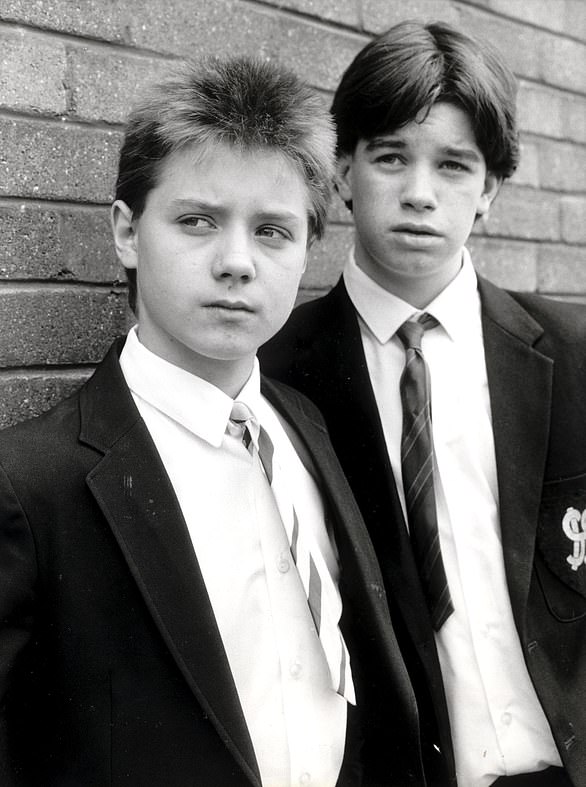 John Alford as Robbie and George Christopher as ZiggyTuesday in 1986

Little brother to Jaqui, Robbie is best remembered for his romances with Calley Donnington and his friendship with Ziggy Greaves.

After leaving the show, he went on to be a regular on ITV series London’s Burning playing Billy Ray.

But his fortunes turned when he was written out after being caught in a drugs sting.

The former teenage pin-up was caught by the News Of The World’s Fake Sheikh and then served a six week sentence after being charged. 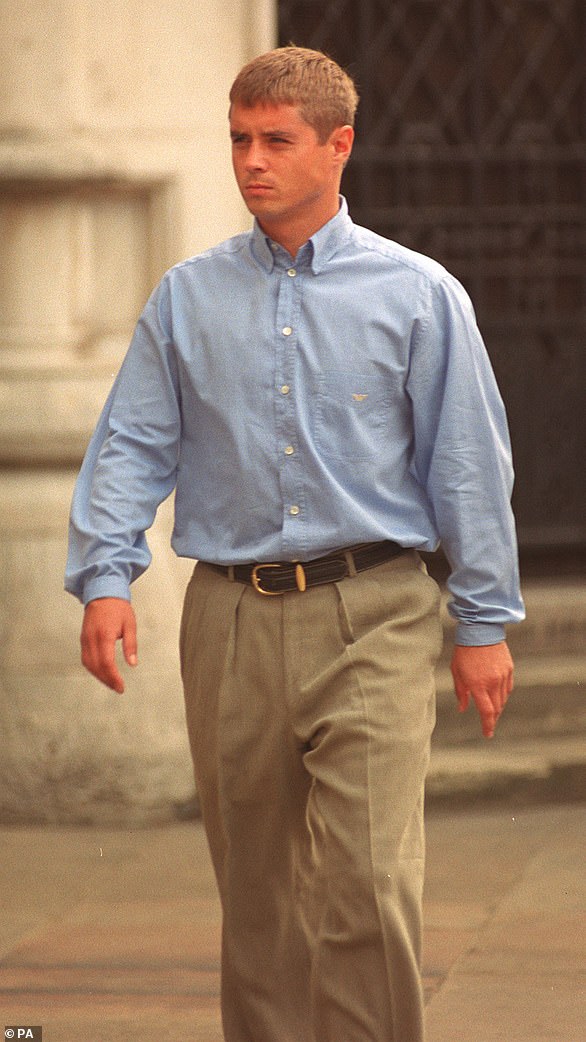 The actor was found guilty by a jury at London’s Snaresbrook Crown Court in 1999 of one count of supplying 2.036 grammes of cocaine to Fake Sheikh Mazher Mahmood, as well as a similar charge involving 11.9 grammes of cannabis resin.

He struggled to return to his previous success after being released but has had small parts since. He’s appeared in Casualty and CBBC show Mile High and had a long-term relationship with Tina Mahon who played Ronnie Birtles.

In 2016, Mahmood was found guilty of plotting to pervert the course of justice and following the case, it was suggested that up to 72 defendants in criminal cases in which he played a role could apply for convictions to be quashed.

Alford’s case was among those taken up by the Criminal Cases Review Commission.

Headmistress Bridget McClusky, played by Gwyneth Powell, was one of the longest standing characters in the show appearing on screen between 1981 and 1991.

The star had actually trained as a teacher but never taught in the classroom, as she decided to pursue acting instead.

She previously told the BBC that she was determined to make the role more modern because she was only 35 when she took on the role.

‘At first Mrs McClusky was written as a ‘”twin set and pearls” role but I was quite young at the time and didn’t want to play it like that. We started with the clothes and she was quite fashion conscious and chic.

‘I was told by lots of people she was a great fillip to young women teachers who started applying for headships.’

After leaving Grange Hill she appeared in popular shows such as Heartbeat, A Touch of Frost and Holby City. Her most recent TV role was in an episode of Casualty in 2014.

Michelle played bad girl Trisha Yates in the school drama from 1978 to 1982 but after leaving Grange Hill, Michelle gave up acting and worked for a major sweet manufacturer.

She made a brief return as Trisha in the final episode of Tucker’s Luck, a Grange Hill spin-off based on Todd Carty’s character Tucker.

Michelle moved to Dundee in the early 1990s to bring up her family, where she works alongside her husband running their family glazing business.

She noticed a small dimple on her breast while on holiday in Rome in May 2015.

She was diagnosed with breast cancer and following a mastectomy was given the all-clear. Now she campaigns to raise awareness of the lesser-known symptoms of breast cancer. 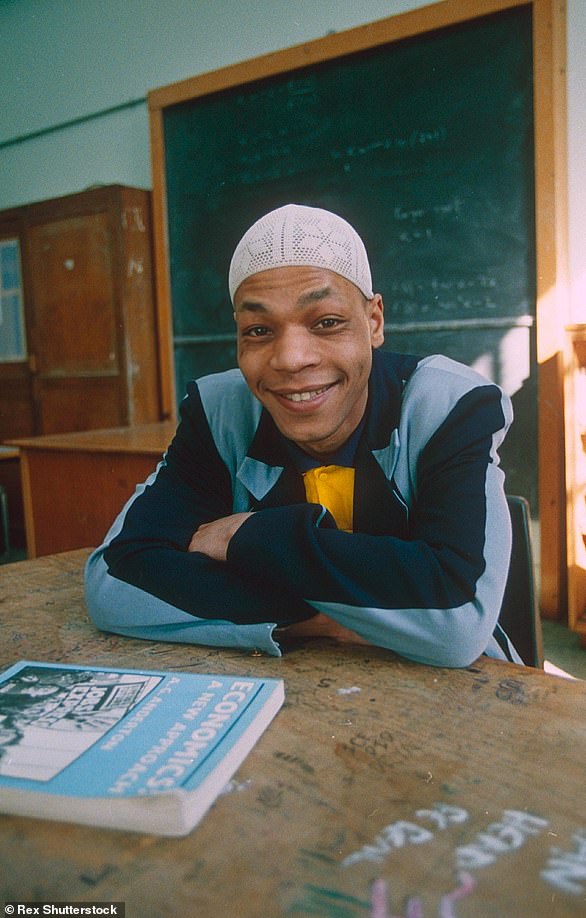 As Benny Green, Terry Sue-Patt was the first character to ever be seen on the show and became one of the most popular characters

As Benny Green, Terry Sue-Patt was the first character to ever be seen on the show and became one of the most popular characters.

He was discovered aged 14 by a talent scout while playing football in the park and enjoyed success in 1989 film The Firm, starring alongside Gary Oldman and Phil Davis.

He said: ‘I basically played myself in Grange Hill. There weren’t many black actors about on TV at that time.

‘I had a great time, getting time off school to play football. It was a bit of a dream come true, really.’

He also had minor roles in other TV shows including Desmonds, General Hospital and Jackanory.

In October 2015, Terry was sadly found dead at his London home, aged 50, following a battle with alocholism.

He was found lying face down in bed and reports suggested his body may have lain undiscovered for a month.

Todd Carty said he was ‘deeply saddened’ by the sudden death of his Grange Hill co-star.

They played best friends Tucker Jenkins and Benny Green. The pair left the show in the early 1980s just four years after joining but remained friends throughout their careers. 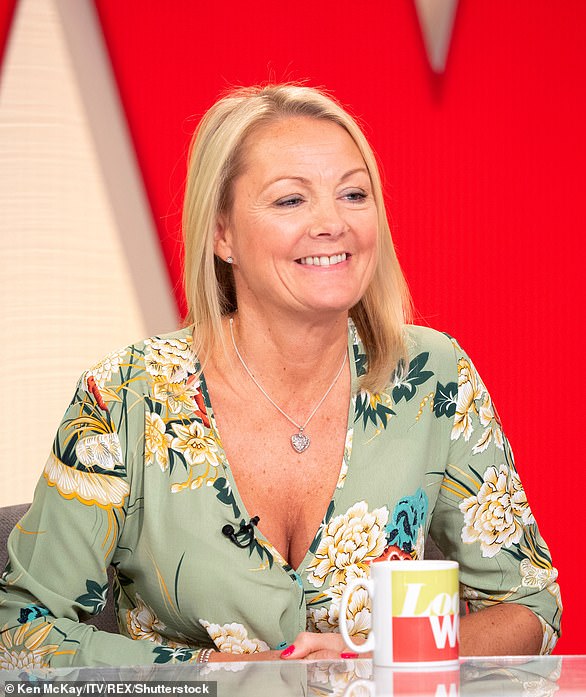 Bettles was one of the cast members to take part in the famous Just Say No single, to promote an anti-drugs message after the programme’s controversial storyline with Zammo McGuire who became hooked on heroin as a child.

The single reached number five in the charts in 1986.

She continued acting with small roles in The Bill and No Strings in the Eighties and Nineties and last appeared on British TV screens in London’s Burning in 2001.

Now married with four children, she is a qualified beauty therapist and has reportedly set up a freight business. Meanwhile two of her sons have followed in her acting footsteps, clinching roles in Doctor Who and EastEnders.

Erkan Mustafa found fame in the Eighties as Roland ‘Roly’ Browning who was bullied for being obese.

He played the role for six years and became an iconic character in the series, suffering horrific bullying at the hands of Gripper Stebson.

By the time he left Grange Hill six years later, Roland was able to stand up for himself and had developed a talent for foreign languages. 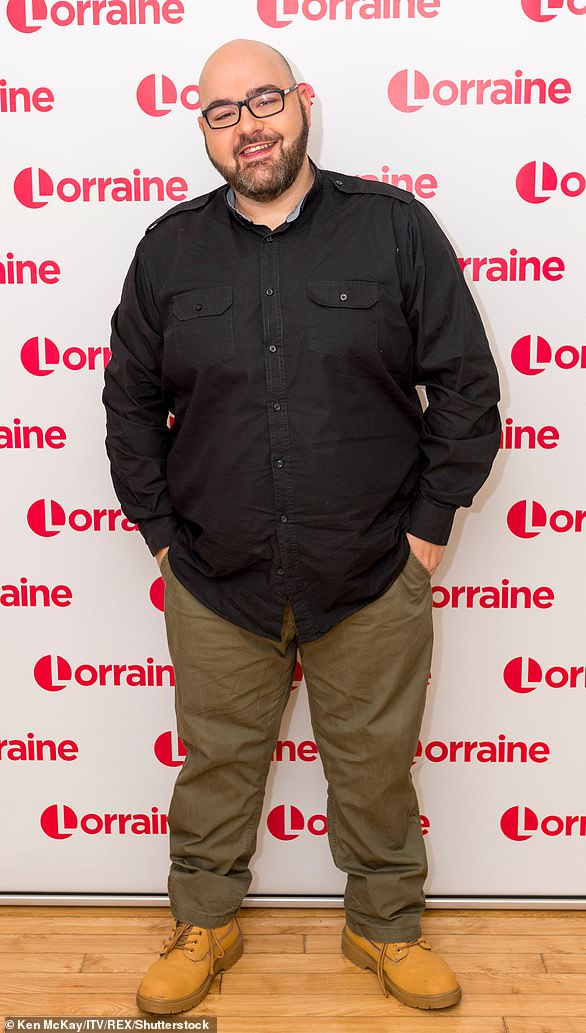 After leaving the school drama in 1987, he went on to act in two series of Chef! with Lenny Henry as well as several episodes of Blackadder.

He still teams up with Lee ‘Zammo’ MacDonald for public appearances and charity events.

Erkan was also instrumental in bringing the cast back together for a 2009 reunion at Sound nightclub in London’s Leicester Square.

Now 50, he continues to act, write and direct according to his Twitter profile. 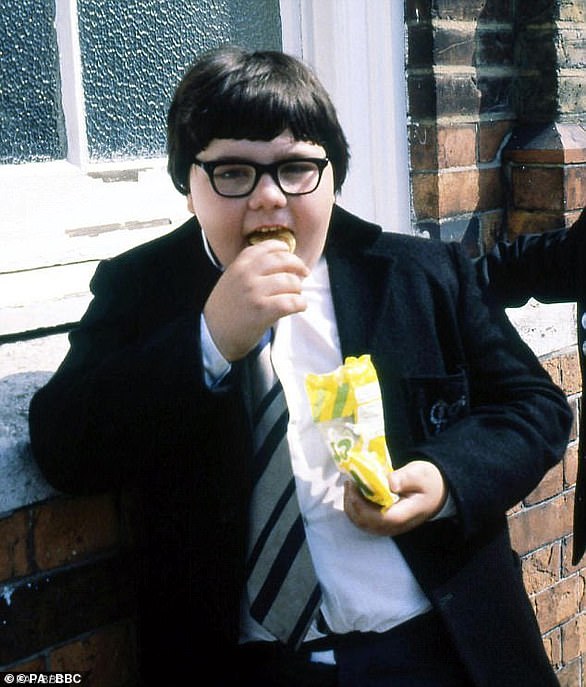 He was bullied for being obese on the show

Popular Scouser Ziggy Greaves arrived at Grange Hill in 1986 and spent four years on the show, with his character compared to original scamp Tucker in the first series.

He went on to appear in Brookside as Little Jimmy Corkhill.

George has also appeared in numerous theatre productions, including some he’s written himself and is currently working on a stage version of Papillion.

He reunited with some of his Grange Hill class mates for Channel 4’s Bring Back Grange Hill and also works for a taxi firm.

Luke ‘Gonch’ Gardener stepped into the shoes of Pogo Patterson as Grange Hill’s ginger entrepreneur, joining the cast in 1985.

Always full of money making schemes, Gonch was a wheeler dealer who ran a toast bar, a dating agency, a homework service and a PE kit lending scheme all from the classroom.

In 1989, during Gonch’s last series, he fell in love with Mandy Freemont.

Actor John Holmes left the show to complete his education and studied at the University of East Anglia, where he eventually became president of the Student Union for several years.

John gave up acting after Grange Hill and now works as the manager of a casino.