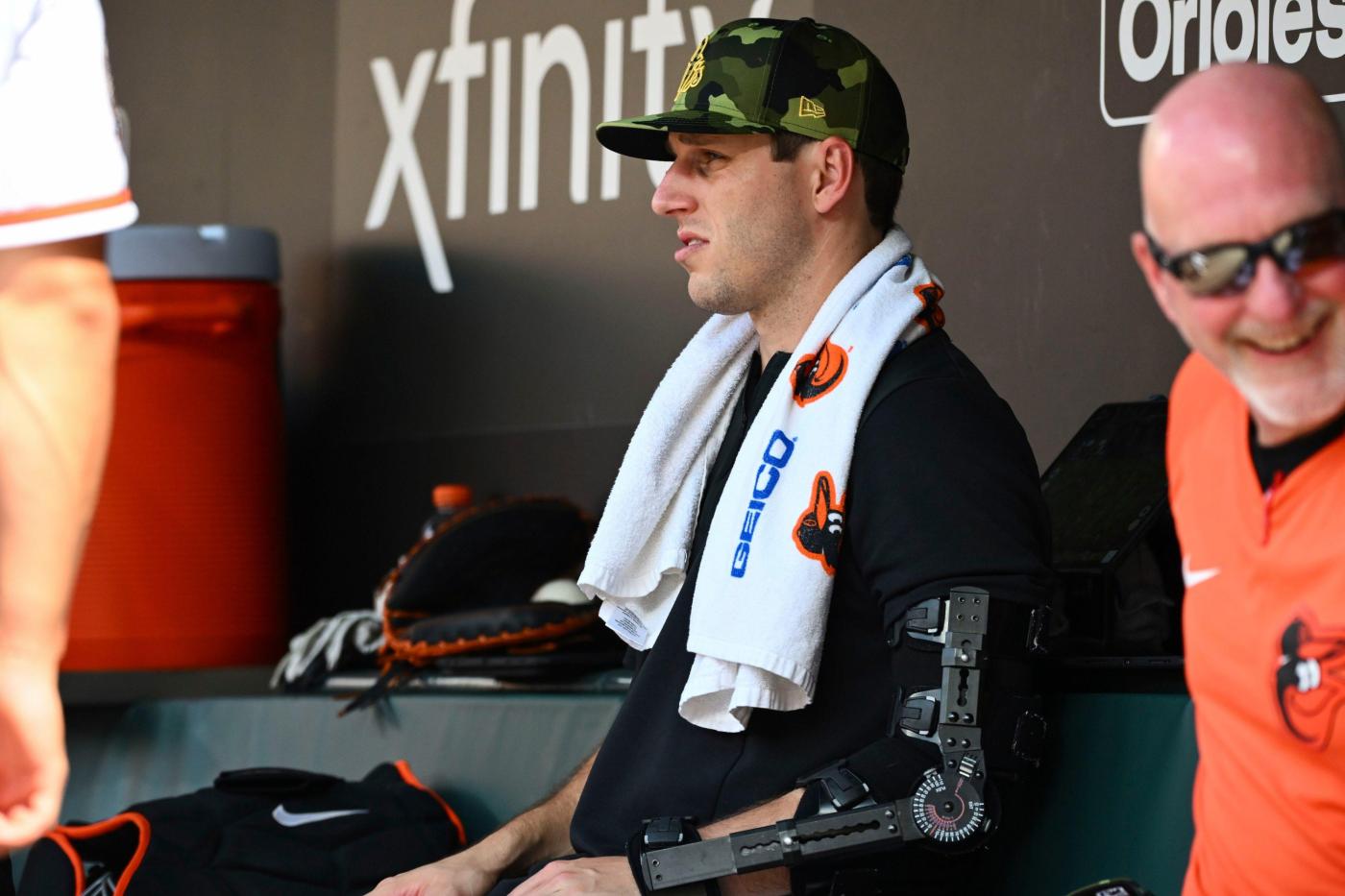 It was such a mundane exercise, coming out to walk through stretching lines Friday with strength coach Trey Wiedman and the rest of the Orioles pitchers. To John Means, however, a return to the field was sweet. Even the mundane can be exhilarating after it has been taken away.

Means is with the team in Kansas City, at the ballpark he grew up visiting from nearby Olathe, Kansas. He can’t play, however, as he’s recovering from the Tommy John elbow reconstruction surgery he underwent in April. To an unknowing bystander, there would be little indication that Means endured that major operation — which will likely keep the 2019 All-Star sidelined into the 2023 season.

The large metal brace, as of Wednesday, is gone. The scar is thin and short, hidden underneath his elbow, a testament to the skill of Dr. Keith Meister in Dallas, who performed the surgery. “Meister is a master of the scar,” Means said.

But with closer inspection, it becomes noticeable Means isn’t yet cleared to lift anything with his left arm. He’s perfected the one-armed scoop of his son, McCoy. He’s in week six of 12 without any strenuous exercise of his left arm, leaving him to work solely on his core and legs in the meantime.

And with an even closer inspection, it’s apparent how Means has channeled the frustration of a year-long recovery into motivation to be better than ever once he returns.

“It kind of gets you even hungrier than you ever were because you’re sitting on the couch, you’re watching guys perform, you’re watching other teams do what they’re doing and you want to be able to help your team out,” Means said. “You don’t know what you have until it’s gone, and so I’m looking forward to getting back and earning it back.”

Being around Kauffman Stadium has extra meaning for Means. When he was about 10, he had a birthday party here. After a summer league tournament, he recalled visiting a game with his father to watch St. Louis Cardinals first baseman Mark McGwire crush a home run ball Means nearly caught beyond left field.

He was here for the World Series, and shortly after he was drafted by the Orioles in 11th round of the 2014 draft, he visited Kauffman Stadium for a matchup between his boyhood team and what would become the team of his future — although his father wouldn’t let him wear any Royals gear to that game.

“I always love coming back here,” said Means, whose father died in 2020 after a year-long battle with pancreatic cancer at age 57. “I just like the park, I love the feel of it. So many memories here, and being able to play on this field, it’s crazy to be able to do that. Obviously, rooting for this team now. Different from the 10-year-old John.”

After the Orioles leave Kansas City, Means and his wife, Caroline Stanley, will rent a U-Haul to carry their things from his parents’ house in Kansas to the couple’s new place in Texas. There’s a silver lining to this, even as Means longs to be back on the mound. He can be around his 1-year-old more and help with a major move.

“I try to look at the positives with every situation,” Means said. “I’m a dad now. I have a family, and we can actually lay some roots down. Obviously, I’m very hungry to get back, and I keep looking and keep trying to figure things out with the game. Because you always have to be on top. If not looking to get an advantage, you’re kind of losing. So I enjoy that time with my family, but I also need to watch the games.”

Means has more time to dissect video of himself than he normally would during a season. It’s a step back that offers a different dynamic, “but I think it’s going to be really useful when I come back.”

And once he returns, Means plans to stay for a while. He wants McCoy to remember what it was like to see his father pitch, so the 29-year-old hopes to pitch long into the future. The first steps toward doing that will be mundane, such as that stretching line at Kauffman Stadium on Friday.

But after Means lost the ability to participate in something so simple, he’ll never shrug off something so commonplace again — not when it comes to baseball.