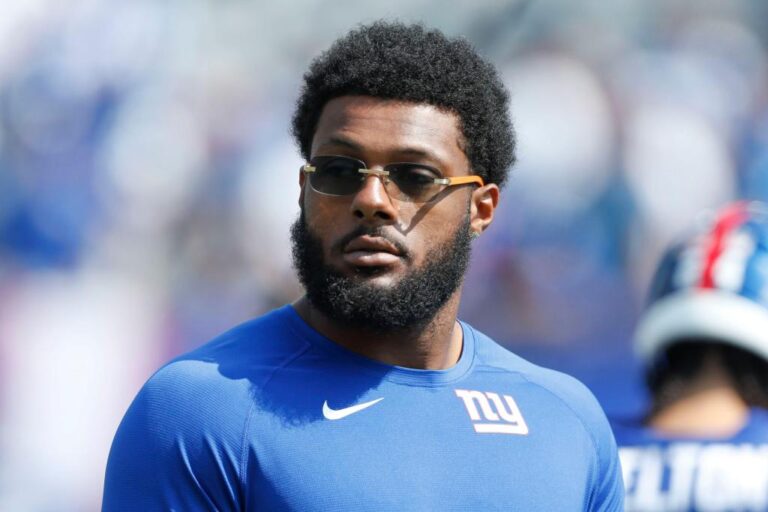 Kayvon Thibodeaux arrived at the Giants on the big stage as April’s No. 5 overall NFL Draft pick in Las Vegas.

So it’s only fitting that he’s expected to make his NFL debut under the bright lights of Monday Night Football against the Dallas Cowboys at MetLife Stadium.

“Big games like this, whether it’s the National Championship, Super Bowl, Monday Night Football, where everybody is watching, I wouldn’t say it adds pressure to me,” Thibodeaux said this week. “But if you do better, it will amplify. We’re in New York.”

Thibodeaux’s long-awaited debut has been delayed by a sprained right MCL injury sustained on Aug. 21 in a preseason game against the Cincinnati Bengals.

He’s been wearing a brace on the knee, and he’s listed as questionable officially for the primetime game. But all signs pointed to the rookie from Oregon playing, barring some unforeseen last-minute change of plans.

Thibodeaux was going full speed in live drills against offensive linemen, despite being listed as limited in practice. He said he was able to “open it up” and was “definitely confident” after making “a lot of progress” in his rehab.

There is actually a chance that both Thibodeaux and second-year pass rusher Azeez Ojulari (right calf) make their season debuts to reinforce a defense that could be without Leonard Williams (sprained right MCL).

“I hope so,” head coach Brian Daboll said, when asked if he were confident they’d both play. “They’ve taken good steps. I think they are much better than they were the week before. Hopefully, they’ll have a good day here, and we’re moving in the right direction with those guys.”

Thibodeaux, 21, should help a Giants pass rush that has struggled to get to opposing quarterbacks without blitzing. But he also demonstrated strong run defense in the preseason, and that could be a big boost against Ezekiel Elliot, Tony Pollard and the Cowboys’ ground attack.

He said he hasn’t allowed the injury to frustrate him and he’s excited to show what he can do.

“That doesn’t really frustrate [me],” Thibodeaux said. “You have to have an understanding of where you want to get to. If I tried to focus too much on the now, of course I’d be down. But just trying to focus on the future of what we have in store and what I have in store for myself.”

Backup QB Tyrod Taylor was absent from Saturday’s practice due to a non-injury personal reason. Both Robinsons, Toney, Williams, McCloud and Layne did not practice due to injury. Thibodeaux and Ojulari were limited. Full participants included center Jon Feliciano (shin) and safeties Dane Belton (clavicle) and Jason Pinnock (shoulder).

At about 2:30 p.m. ET Saturday, after Toney was listed as doubtful on the official injury report, the Giants receiver posted a video on his Instagram video of a man yelling: “Shut yo b-tch a– up before I get to talking sh-t about you.” A week ago, Toney had made two posts directed at his doubters that were quickly deleted.

Parsons and Schultz both were upgraded to limited participation on Saturday for a walkthrough. Gallup was full.