An eco-activist heckled Liz Truss today is a former parliamentary assistant who said the British Army ‘killed civilians and ruined the world’, it can be revealed – as Greenpeace shared a gloating photo of its staff enjoying a ‘well-earned coffee’ after storming the Tory conference.

Ami McCarthy shouted at the PM today during her opening address to Conservative members in Birmingham before she was dragged away by security. Joined by Greenpeace’s head of public affairs, Rebecca Newsom, policy officer Ami unfurled a banner midway through Ms Truss’ speech in Birmingham before the activist then shouted: ‘Who voted for fracking?’

It can be revealed that the former University of London graduate worked in the House of Commons for more than a year. According to Ms McCarthy’s LinkedIn profile, she was a parliamentary assistant between September 2017 and July 2018 before then becoming a policy adviser in July 2018 – a position she remained in for four months.

Her Facebook features long statuses in which she comments on the events of the day. In one post on August 11, 2020, she mounted an attack on British foreign policy and suggested the British Army had ‘ruin[ed] most of the world’.

‘Always find it fascinating that it’s often the same people who support the British Army going overseas to ruin most of the world, that have the biggest problem with asylum seekers and immigration,’ she wrote.

‘We ruined everything and killed civilians all over the place- men, women and children. We support illegal wars and repressive regimes, we sell weapons to dictators to kill their own people. Of course people are going to look for somewhere else to be safe.’

In another post in June 2020, she complained about how Black Lives Matter protests in London had been perceived. The day before, a mounted policewoman had suffered a broken collar bone, broken ribs and a collapsed lung after she was flung violently into traffic lights outside Downing Street after a protester hurled a bike and other missiles at her horse.

Commenting on the incident, Ms McCarthy wrote: ‘That policewoman who fell off her horse yesterday rode straight into a traffic light when they started charging at protestors totally out of the blue. Her pain from knocking herself off her horse, does not eclipse the pain of the people protesting.’ 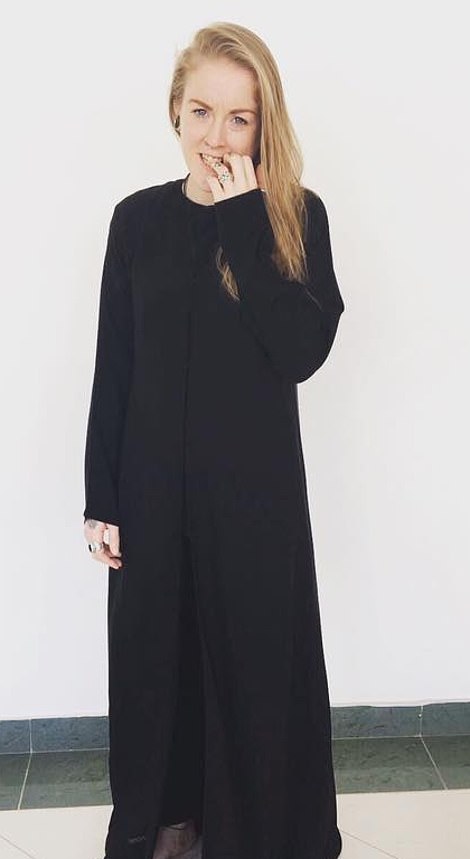 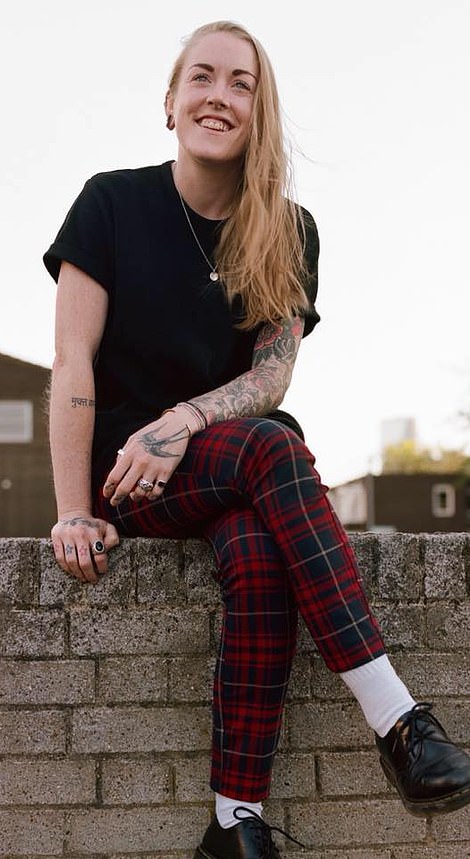 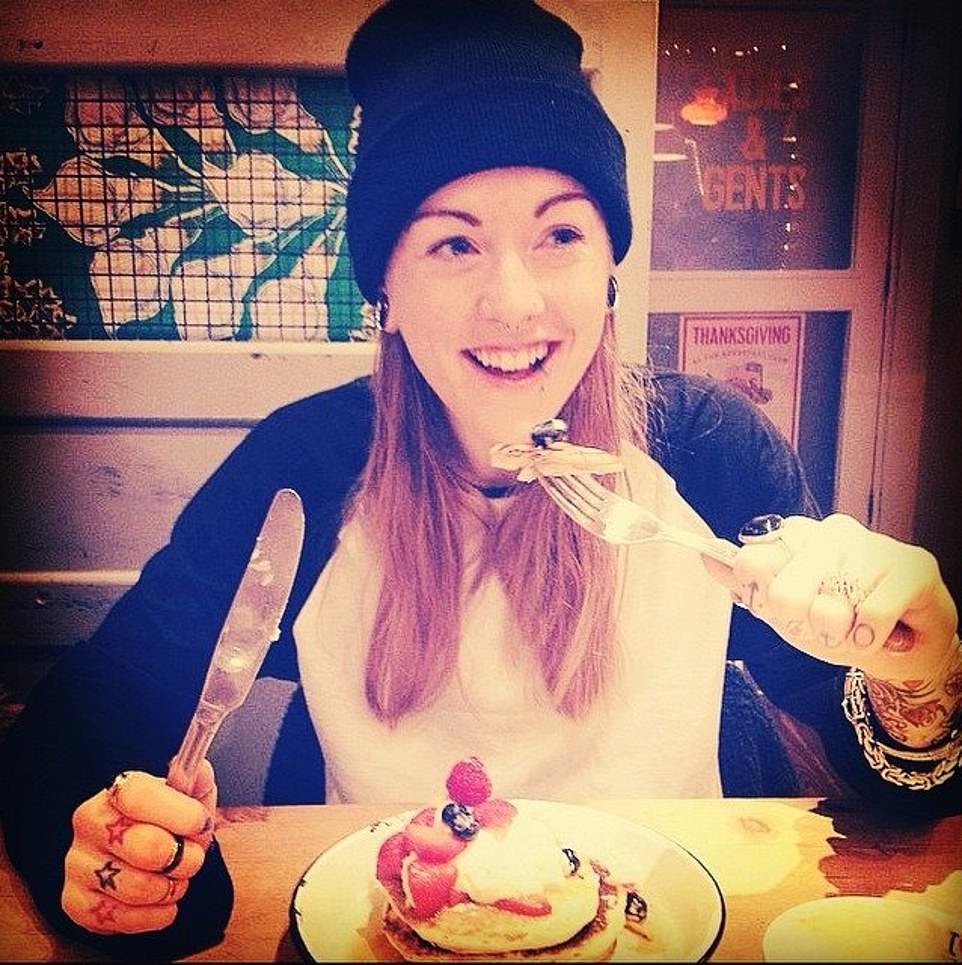 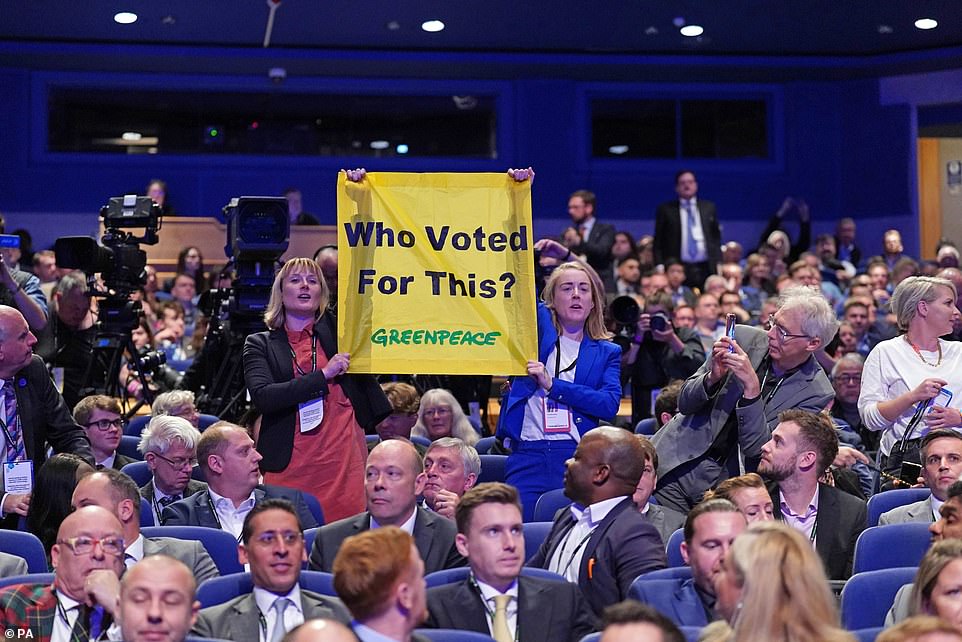 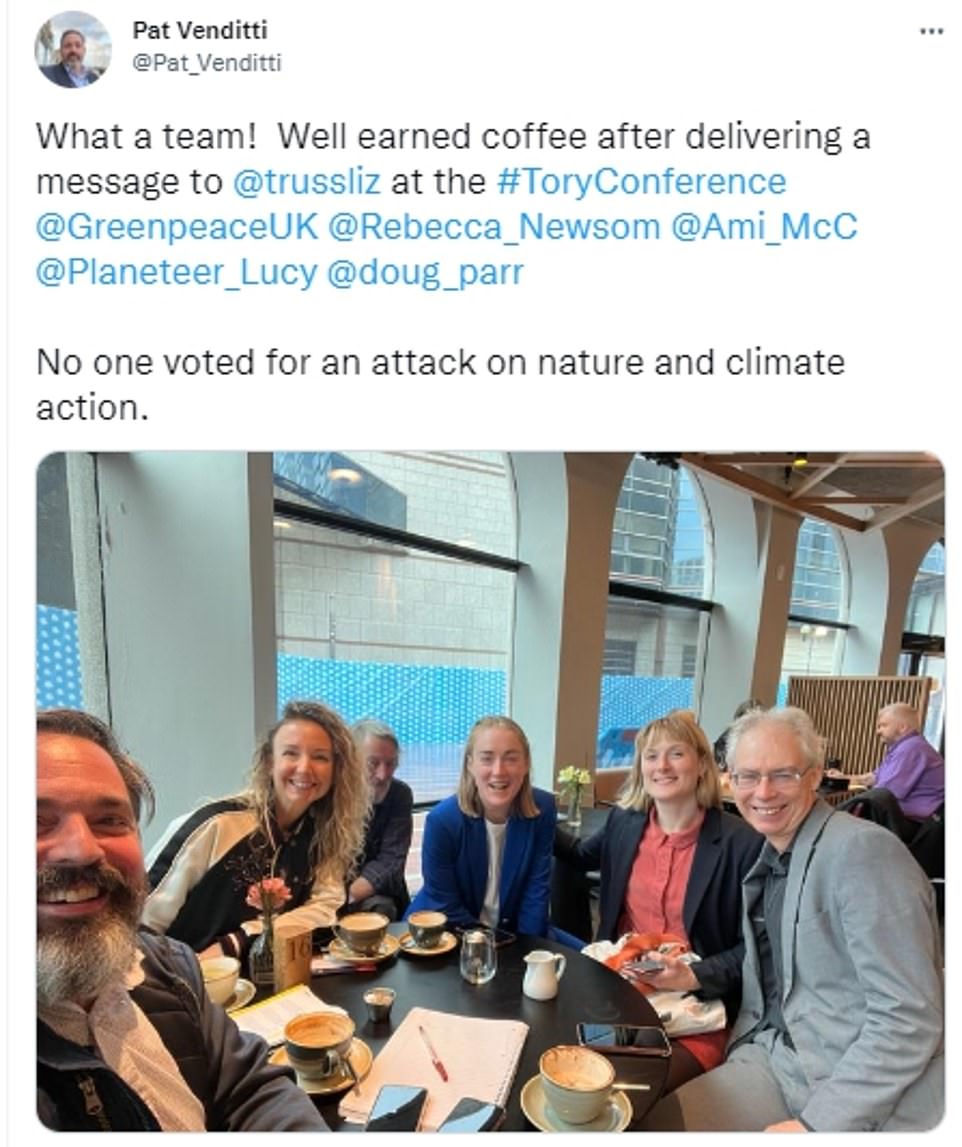 Greenpeace gloated about their protest in a tweet shared this afternoon. ‘Well done team,’ it began

Following today’s disruption, Ms Truss could be heard telling security ‘Let’s get them removed’ as boos erupted from the audience.

After around 30 seconds, security guards bundled the pair out of the conference hall, with one seen grabbing Ms McCarthy’s lanyard.

Ms Truss tried to make a joke of the protest as she continued with her speech, telling party members at the conference: ‘Now, later on in my speech, my friends, I am going to talk about the anti-growth coalition but I think they arrived in the hall a bit too early.’

As well as speaking out about environmental issues, Ms McCarthy has also been vocal about Brexit and gay rights, condemning attacks on people from the LGBTQ community.

Ms McCarthy’s latest protest in Birmingham came after the new PM infuriated green activists by lifting a moratorium on fracking in place under Boris Johnson, along with backing new North Sea oil and gas extraction.

Her fellow protester, Rebecca Newsom, is a Durham University graduate who worked in public relations before completing a Master’s in Environment, Politics and Development at SOAS.

In an online profile on the SOAS website, Ms Newsom said she ‘hadn’t quite found my passion’ in her PR work and ‘knew I wanted to work in the field of environmental politics’.

She said her work at Greenpeace involved ‘devising and leading on strategies to influence politicians across different UK political parties to promote action in the areas of energy, ocean protection and air pollution’.

She also also sits on the board of the UK Energy Research Centre, an independent body that carries out research into low-carbon energy production.

In a press release today, Greenpeace accused Ms Truss of ‘shredding’ her party’s 2019 manifesto promises’ around nature and the environment.

The group cited a recent YouGov survey which found that 81 per cent of UK adults believe nature is under threat.

Rebecca Newsom, Greenpeace UK’s head of public affairs, said: ‘Who voted for this? In a healthy democracy, people should get the government programme they voted for, but Liz Truss is putting most of it through the shredder.

‘What they’re getting instead is fracking, a potential bonfire of rules on wildlife and nature protection, and now the prospect of benefit cuts.’

Ms Newsom, speaking to reporters after being thrown out of the speech, said: ‘This year we really felt we needed to make an intervention because nobody actually voted for a lot of what Liz Truss and her Government are trying to do at the moment.

‘There’s a whole host of things that the Conservative Government were elected to do in 2019 that they are simply not doing and we needed to take that message and represent the public and actually push for Liz Truss to remain true to what the public has actually asked her and her Government to do.’

Both protesters said they were ‘hopeful’ that the Government would remain committed to net zero, but that its policy was currently heading in the wrong direction.

Ms McCarthy said: ‘With policies like the ones she’s suggesting, a focus on fracking, a focus on North Sea oil and gas, it’s absolutely not the right direction.’ 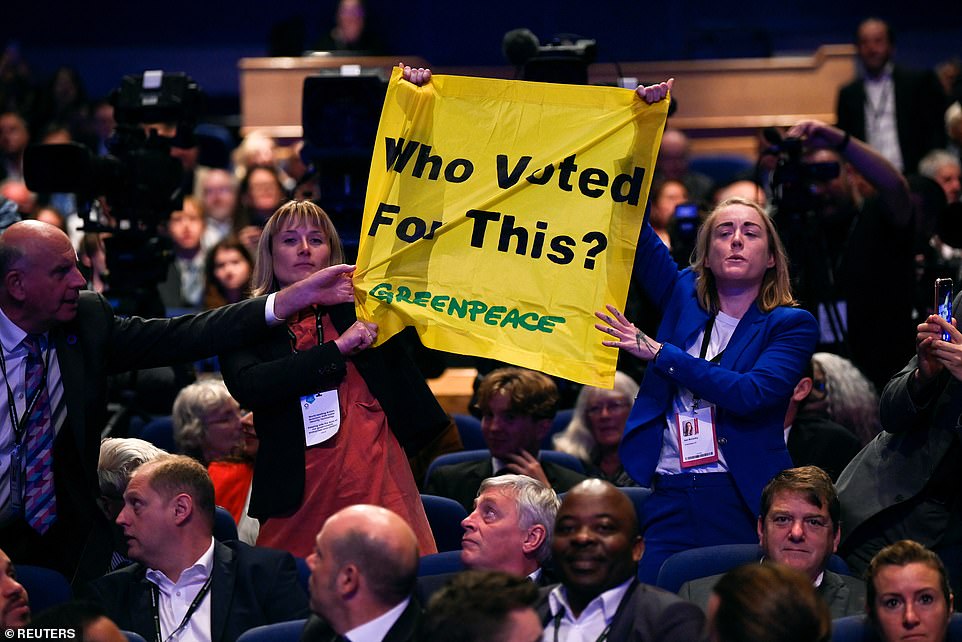 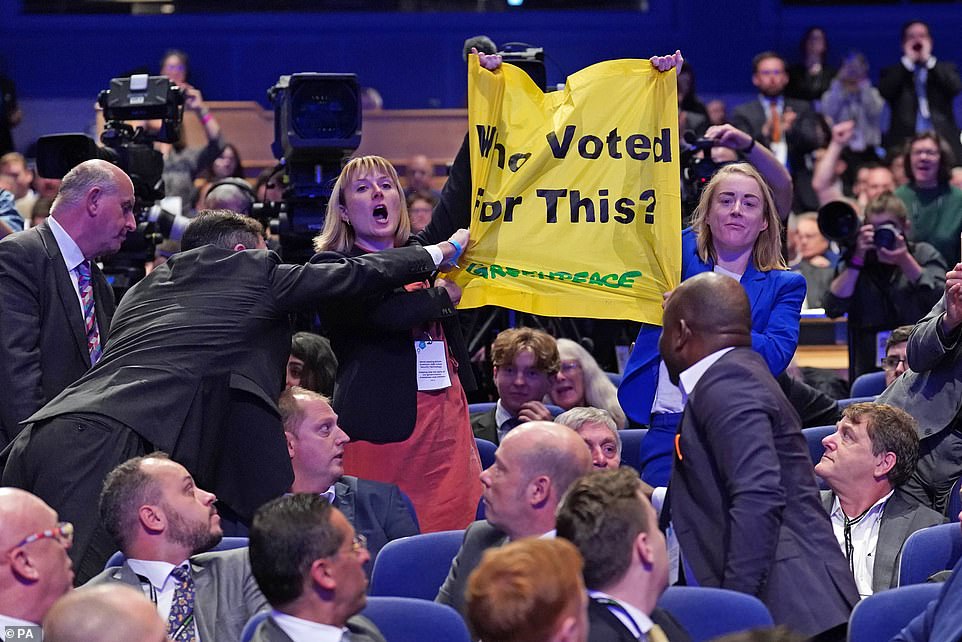 From the stage, Ms Truss could be heard telling security ‘Let’s get them removed’ as boos erupted from the audience 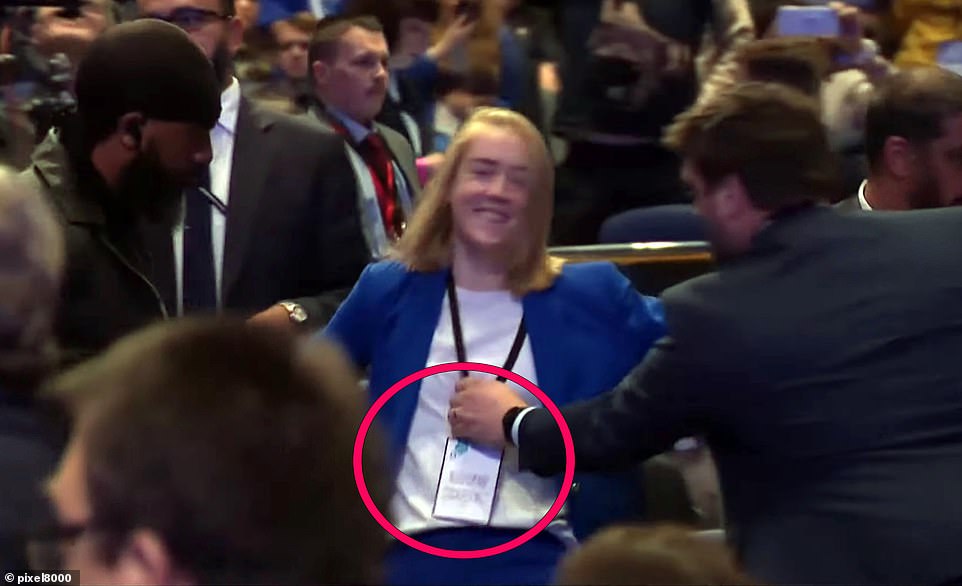 Today Ms Truss’ allies praised the way she had handled the protests.

Business Secretary Jacob Rees-Mogg told the BBC’s World At One: ‘The thing hecklers never realise is they actually help a speaker, rather than harm because the speaker commands the floor. I thought the Prime Minister dealt with it with humour and charm.’

Tory MP Anna Firth told GB News: ‘She dealt with the protestors very well and showed that she can think on her feet.

‘The Prime Minister dealt with it brilliantly and it energised everybody – everyone in that hall was 100 per cent behind the Prime Minister. Everybody has a right to protest but there’s a time and a place.’

Earlier this week, Jacob Rees-Mogg dismissed the idea of local referendums to gauge support to allow fracking to go ahead, as the Energy Secretary backed drilling in his garden.

The Cabinet minister said he would be ‘delighted’ for shale gas extraction to start in his Somerset country estate despite critics raising concerns about earthquakes.

Ms Truss has angered some Conservative MPs and broken a Tory manifesto promise by removing the moratorium put in place in England to prevent tremors.

The Prime Minister has vowed to only approve fracking in areas where it is backed by surrounding communities but has so far not set out any details.

Mr Rees-Mogg, who is also Business Secretary, dismissed the idea of referendums to approve drilling and onshore windfarms, another controversial topic among Conservatives. 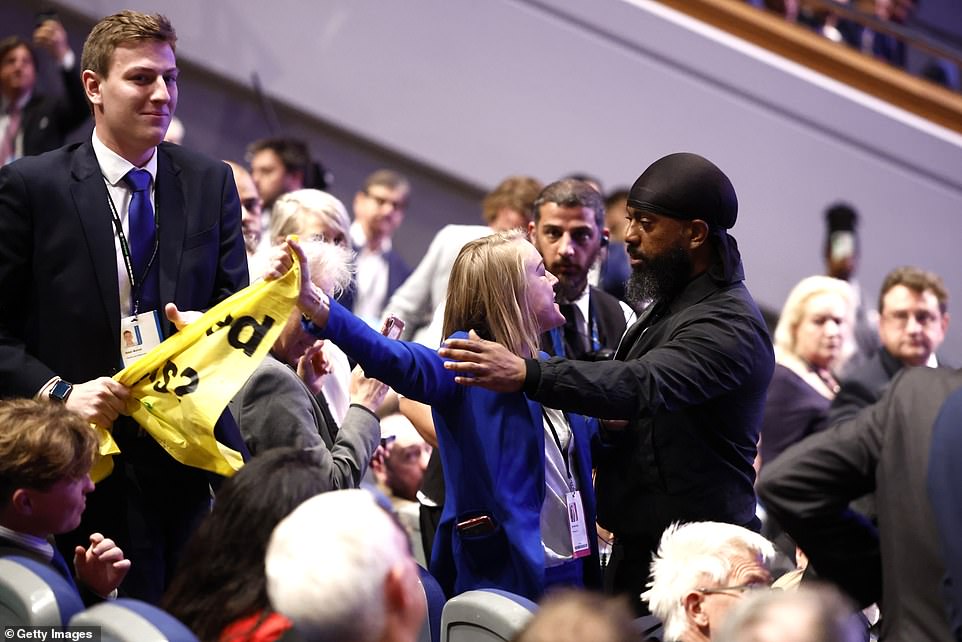 After around 30 seconds, security guards bundled the pair out of the conference hall 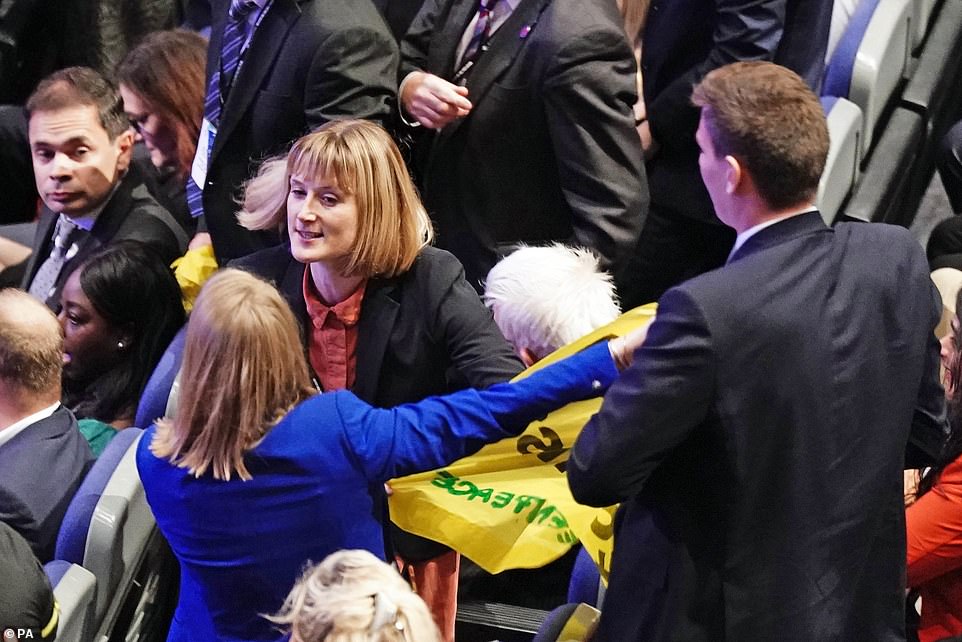 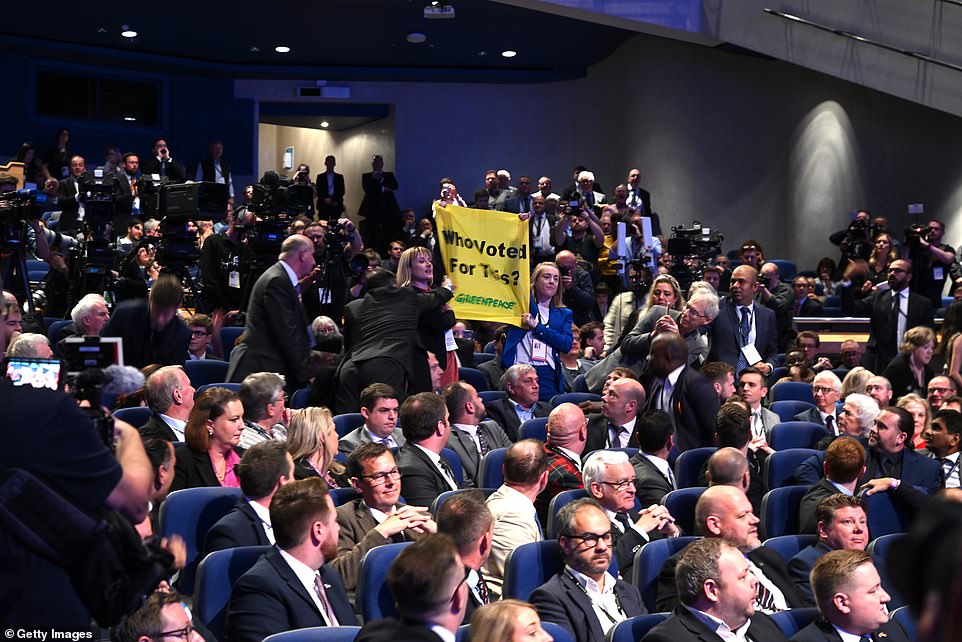 In a press release today, Greenpeace accused Ms Truss of ‘shredding’ her party’s 2019 manifesto promises’ around nature and the environment

Giving his thoughts at the Tory conference, he said companies could ‘go around door to door, as politicians do in elections’ to gauge support.

‘Then they have to go around to an identifiable community and if they get 50% plus one in favour then they should be able to go ahead,’ he told a Telegraph event.

‘It’s early days, early discussions as to how it could be done. I don’t think local referendums are necessarily the right idea, turnout in local referendums could be very low so how much real validity would that give you as to consent.’

To curry favour among residents, he said compensation should be paid to those disrupted by building works and then royalties for the community.

‘I think people who are disturbed by the building works ought to get some compensation for that and that should be a payment to them,’ he said.

‘And then you should have a royalty for people where the shale gas comes from.’

Mr Rees-Mogg, whose residence is the 17th-century Gournay Court in the parish of West Harptree, was enthusiastic about welcoming fracking on his land.

‘Yes, of course I would. I would be delighted, particularly if I get these royalties,’ he said.

Mr Rees-Mogg said it is ‘the socialists’ and Green MP Caroline Lucas who oppose fracking, adding: ‘Well that makes my heart bleed.’

Today, Ms Truss shrugged off the protests and vowed to create a ‘new era’ for Britain.

After a gathering in Birmingham blighted by splits over tax rates and benefits, the PM said she is determined to take the country through the ‘tempest’ of the global economic crisis after Covid and the war in Ukraine.

Pointing to her energy bills bailout and tax cuts since entering No10, Ms Truss insisted: ‘I refused to consign our great country to decline.’ 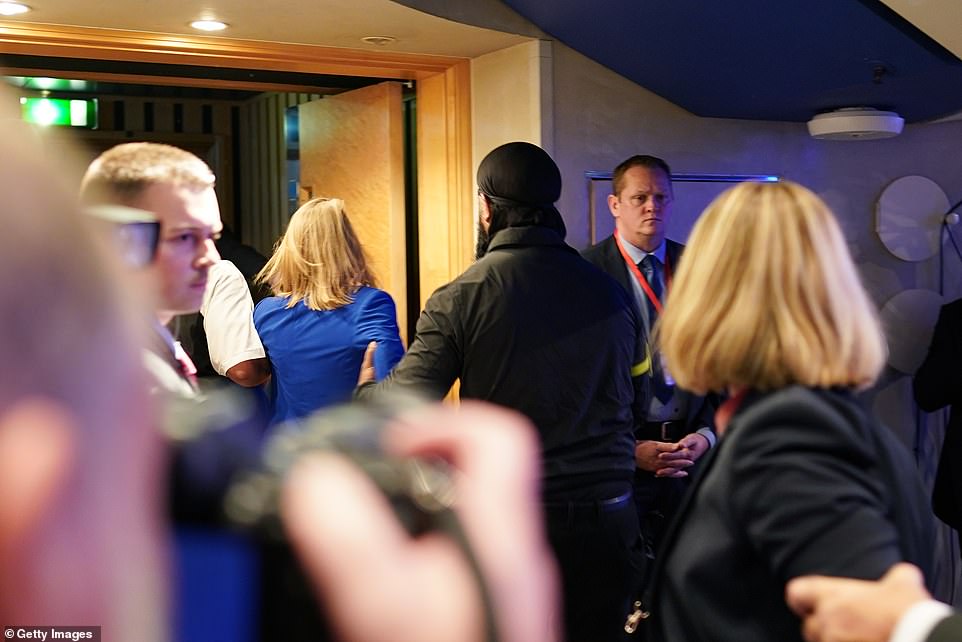 Rebecca Newsom, Greenpeace UK’s head of public affairs, said: ‘Who voted for this? In a healthy democracy, people should get the government programme they voted for, but Liz Truss is putting most of it through the shredder’

She said she had three priorities for the economy – ‘growth growth and growth’. ‘Growth means more money in people’s pockets,’ she said.

In a highly personal appeal, she said she had ‘fought’ to be where she is – relating how she went to a comprehensive school and was once given a junior hostess badge while her brothers received a junior pilot badge.

Having walked on to stage to Moving on Up by M People and watched by husband Hugh, Ms Truss was only a few minutes into her speech when protests erupted in the hall.

Delivering a true-blue Tory message, Ms Truss said she ‘loved’ business and enterprise. ‘I’m not going to tell you what to do, or what to think or how to live your life,’ she said.

‘I’m not interested in how many two-for-one offers you buy at the supermarket, how you spend your spare time or in virtue signalling.

‘I’m not interested in just talking about things, but in actually doing things.’

She added: ‘What I’m interested in is the hopes and fears that you feel every day. Can you get a good job locally? Is it safe to walk down the high street late at night? Can you get a doctor’s appointment?

‘I know how you feel because I have the same hopes and fears. I want what you want.’

She went on: ‘I believe that you know best how to spend your own money… that is what Conservatism is about.’ 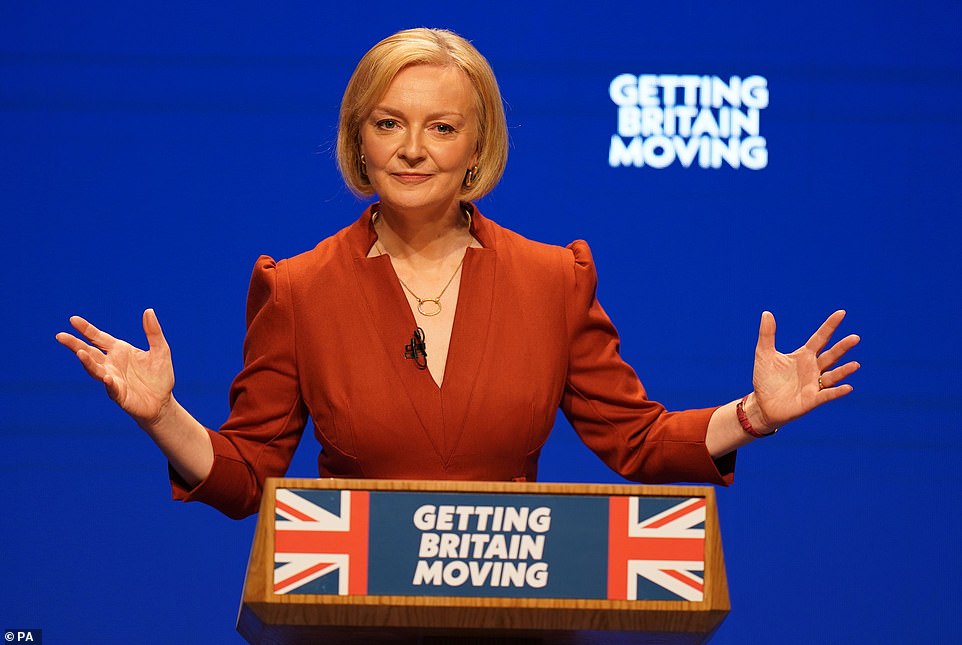 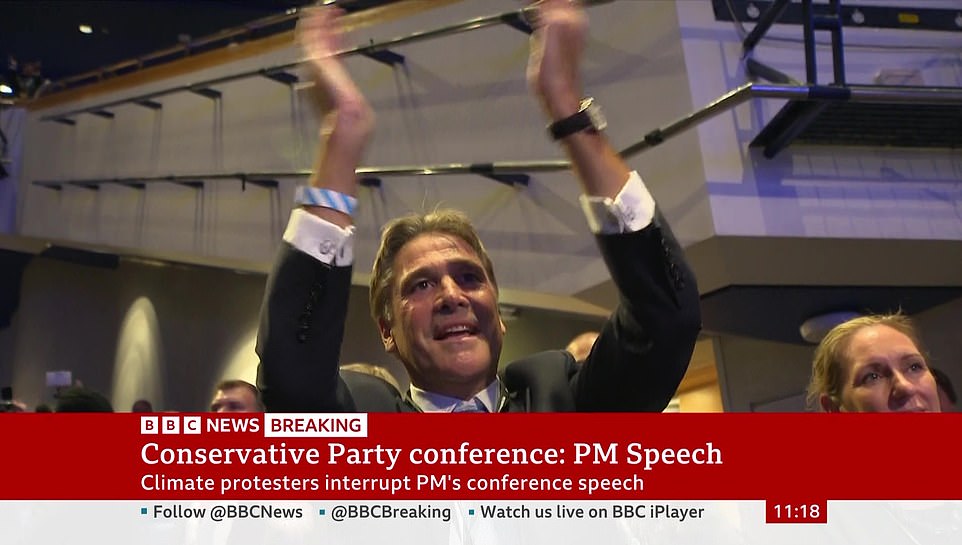