It was just past 10pm in New York when the phone rang in my hotel room: ‘I think you should turn on the news, something big is happening,’ said a colleague.

America’s news networks were reporting that Princess Diana had been involved in a serious road accident, in Paris, where it was the middle of the night. While Europe slept details were initially sketchy in this pre-internet age, but before midnight her death was being confirmed.

From then on you knew that the coming week, 25 years ago, was going to be one like no other.

Greg Rusedski had seen the first reports but, with a US Open fourth round match looming the following day, had gone to sleep hoping for the best and fearing the worst.

Little did he know that he would become the country’s one sporting distraction amid the extraordinary aftermath, making an unlikely run to the Flushing Meadows final while all other events in the UK had been suspended amid the mass mourning.

There were slight echoes of what occurred last year with Emma Raducanu: Rusedski, also born in Canada, had never won a match in four attempts at the Open and was seen as very much an outsider. 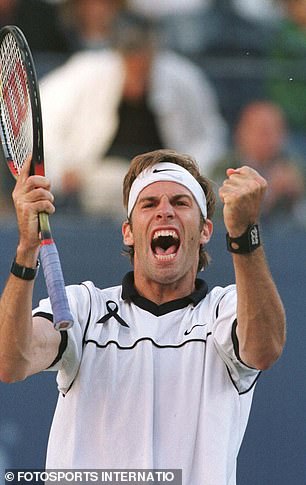 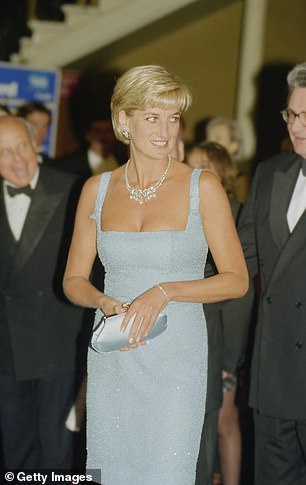 On the middle Sunday he was due to play Czech Daniel Vacek in a bid to make the quarter finals, but not before talking with his wife.

‘There was a discussion about whether I should pull out and I talked it through with Lucy,’ he recalls. ‘In the end we decided it was right to play and I would wear a black ribbon on my sleeve as a mark of respect.

‘Of course the tragedy was very upsetting and you could not help think of Diana’s young children, but it was my choice to continue.’

World No 20 Rusedski continued an uplift in form that had been sparked when he teamed up with American coach Brian Teacher in early August, beating Vacek in straight sets.

That Sunday evening a few of us walked down to the British Consulate in New York, which had become a pop-up memorial. Emotions were running high.

One recalls a local TV producer moving some of the flowers, only to be met with a sharp riposte from a well-spoken Englishman: ‘This is a memorial, not a bloody film set,’ he snapped.

Rusedski had made the last eight without dropping a set, completely reversing his previous US Open form.

‘Flushing Meadows was quite changed for that tournament, because it was the year that the Arthur Ashe Stadium came into use,’ he says. ‘The facilities and everything were different and I think that helped my mindset in forgetting the previous results I had there.

‘My preparations had been excellent for the tournament. Earlier that summer I had reached the quarters at Wimbledon and continued to have some good results after that.’

In prosaic tennis terms Teacher, a laidback and slightly bohemian Californian, had helped change Rusedski’s backhand to a more offensive shot, when it had previously been a weakness.

Clearly, however, that was not what people were talking about ahead of his quarter-final against powerful Dutchman and recent Wimbledon champion Richard Krajicek.

‘The whole atmosphere was very surreal but one thing I was always good at in my career was compartmentalising, and that served me well.’ 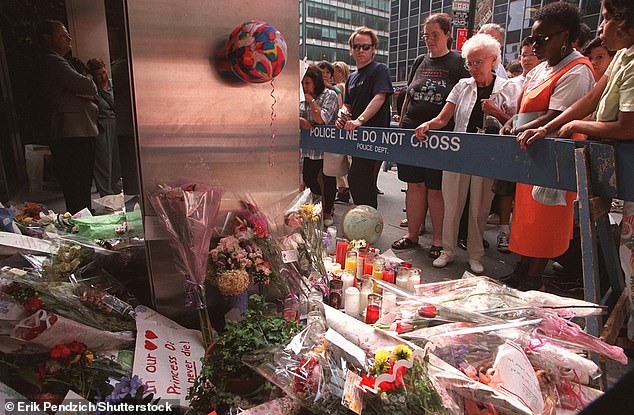 After edging past Krajicek in three very tight sets, the focus was on whether Rusedski would be watching the funeral that was dominating the world’s news agenda.

In those days the US Open, ludicrously, played the semi-finals on consecutive days over the last weekend. The funeral was due to start at 6am local time on the Saturday.

Rusedski, trying to say the right thing, announced that he would get up to watch it. Teacher was less impressed by that idea: ‘I would not advise that at all,’ he told the quote-hungry UK media pack.

The player also had other problems that he was keeping to himself: ‘The day after the Krajicek match I woke up with quite a severe throat infection, so in the two days left before the semis I was doing everything I could to try and improve that.’ 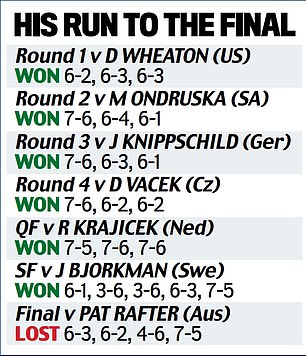 When Saturday came, ahead of his match against Sweden’s Jonas Bjorkman – all football and cricket fixtures were postponed back home – he did watch some of the funeral.

‘We saw it on the news channel, but I knew I had to put it aside with the biggest match of my career coming.

‘I don’t think the Diana tragedy really added either way to the pressure. I was aware that I was the only British sportsman playing in anything and of what was going on in London, but you are quite a long way away and again I could compartmentalise.’

Bjorkman led by two sets to one, but Rusedski fought back to level and then, at 6-5 in the decider, the Swede’s nerve cracked and he conceded a decisive break.

With Britain having ground to a halt, it had now had its first male US Open finalist since Fred Perry. Using the British passport that came through his Dewsbury-born mother, Rusedski had struggled for acceptance among the public, especially since the emergence of Tim Henman.

Now he was being talked of as the man to cheer up a reeling nation as he prepared to face the in-form Australian serve and volleyer, Pat Rafter.

With the UK watching at home on the Sunday night it was not to be, despite Rusedski pulling back the third set. The supremely confident Rafter, rushing in and dominating the net, prevailed 6-3, 6-2, 4-6, 7-5. 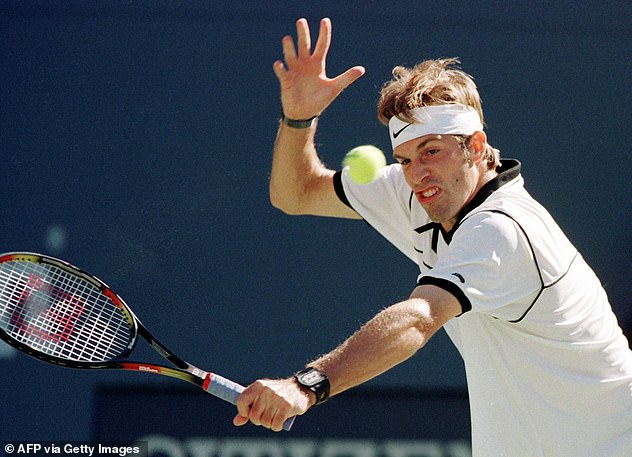 The combination of the five-setter the previous day and the persisting throat infection had left Rusedski slightly drained.

‘I remember coming back well in the third set and thinking I had a chance, but then lacking some energy in the fourth,’ he recalls.

‘That is still at the back of my mind and a bit of a regret. The tournament doctor had offered me the chance of treating the throat with a steroid through a TUE (therapeutic use exemption) because there was a concern I might have to pull out.

‘But I never had a TUE in my career and was against taking it. I thought I could find a way to get through this. I still might have lost anyway and the better player won on the day. Pat was in great form that summer.’

The day afterwards Rusedski took Concorde home to play at a tournament in Bournemouth, and in reaching the semi-finals there became the first British man to make the top 10 since the inception of the rankings.

Later in the year he was voted Sports Personality of the Year: ‘I think that showed I had gained the acceptance of the British public, because they vote for that and don’t hand it out easily.’ 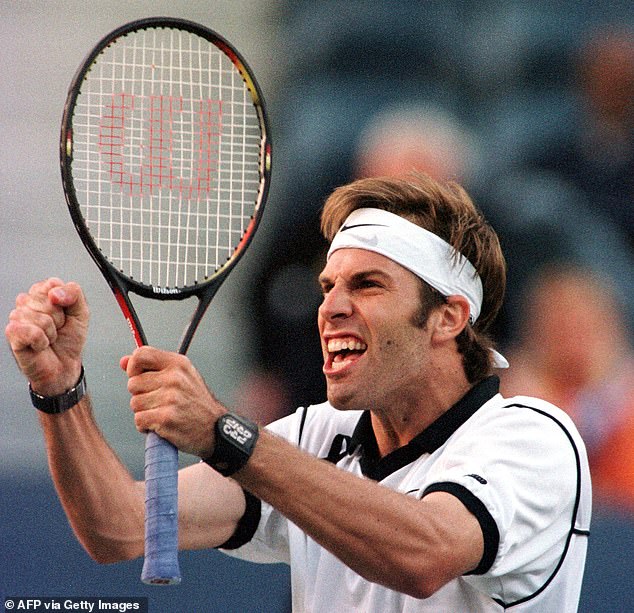 He vowed to play on and he went all the way to the final, only to end up losing out to Pat Rafter

There was also, in more echoes of Raducanu last year, a controversial coaching postscript.

Despite the unexpected success in America he immediately brought to an end the coaching arrangement with Teacher, like Raducanu did with Andrew Richardson.

He felt he needed someone with more tactical acumen and turned to the experienced Englishman Tony Pickard.

After that Rusedski enjoyed a strong few years and, contrary to what some sceptics thought at the time, continued to make Britain his home, as it remains to this day.

Yet having nearly won the US Open in this most surreal of all sporting weeks 25 years ago, he never made a Grand Slam final again.