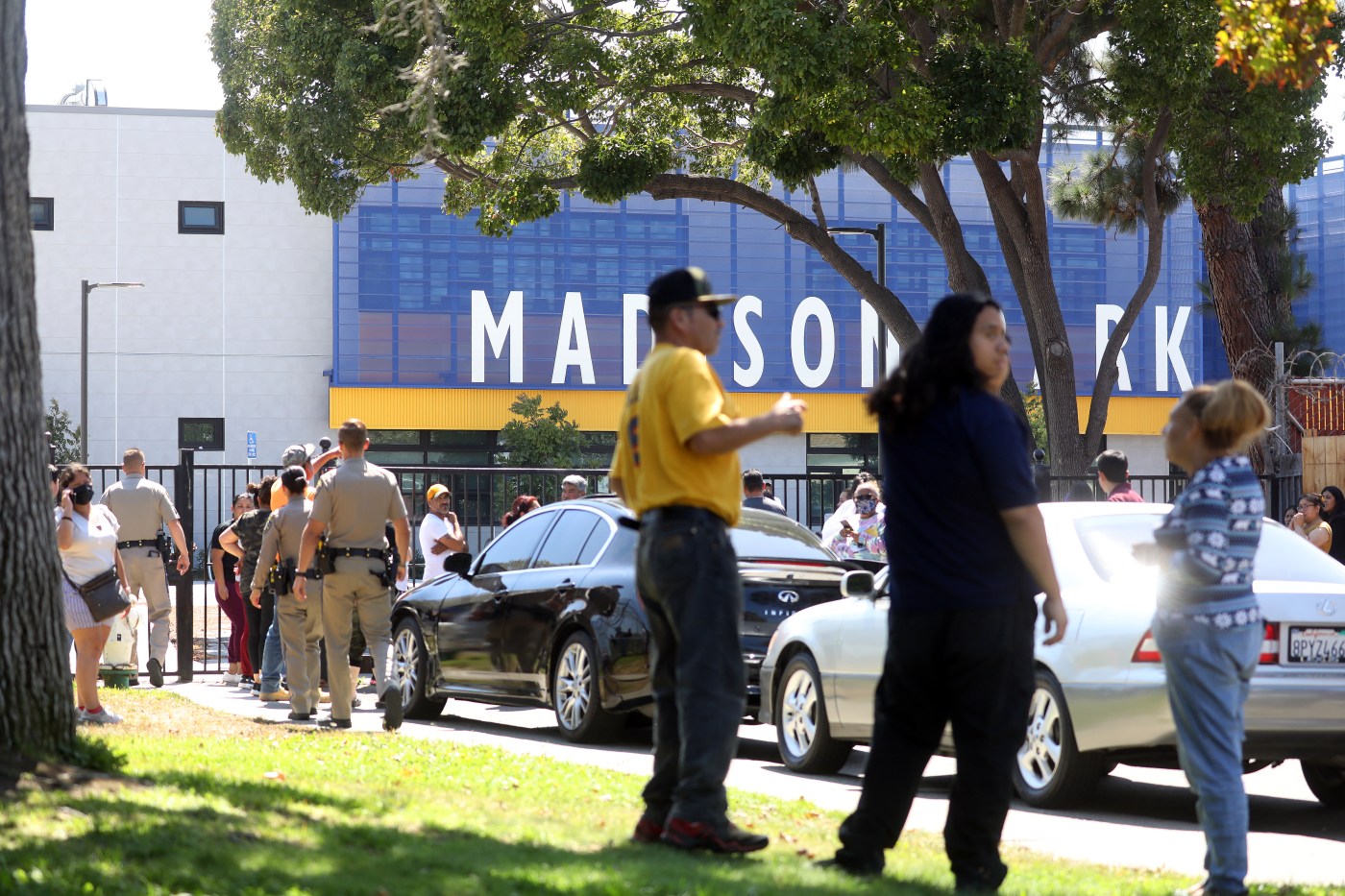 OAKLAND — A day after a teenager was shot by another student at a deep East Oakland middle school, students, parents and community leaders reacted with a mix of shock, grief and outrage at yet another instance of gun violence to hit the city — this time, among schoolchildren.

“It’s really distressing and disappointing — I thought we were making a change in our community,” said Yarelin Espinoza, 17, a senior at Madison Park Academy, a middle and high school campus. “It’s the one place we thought was safe to be around. Turns out, it’s not.”

Droves of students did not attend classes Tuesday, a day after Oakland police say a 13-year-old student was hospitalized after being shot in the torso by a 12-year-old classmate in an open quad area of the school. As the few students who did show up Tuesday tried to focus on classwork, community leaders gathered on the steps of City Hall to call for an end the spate of shootings, beatings and killings gripping the Oakland.

The shooting Monday at Madison Park Academy in the Sobrante Park neighborhood punctuated a violent week that saw six people killed in Oakland over the previous five days, along with several others wounded in separate shootings. After trailing last year’s total for much of the year, the number of homicides in the city has approached last year’s pace — itself the most in nearly a decade.

As of Tuesday, 83 people died in homicides investigated by Oakland police, compared to 86 at the same point last year.

In a press conference at City Hall, members of clergy, relatives of homicide victims, and officials with the Oakland Police Department and the Alameda County District Attorney’s Office implored residents to end the bloodshed.

“There is too much apathy at the violence that’s going on in this city is the city,” said Terry Wiley, Alameda County’s chief assistant district attorney. “We need to see more outrage from the community. The violence has to stop.”

On Tuesday, the Alameda County District Attorney’s Office said it was reviewing evidence in the Madison Park Academy shooting ahead of making a determination on what charges to file against the 12-year-old student booked at Juvenile Hall on suspicion of assault with a firearm and other weapons charges. Potential charges could range from assault with a firearm to negligent discharge of a firearm and to laws pertaining to juveniles in possession of firearms and weapons brought onto school campuses.

Authorities said the shooting, which was reported at 1:19 p.m. Monday, happened outside in the open quad area of the school located at 400 Capistrano Drive. It was not clear if the two students knew each other and what prompted the shooting remains under investigation.

The gun believed to be used in the shooting was recovered, officials said.

Espinoza, the 17-year-old Madison Park Academy senior, said she was in her physical education class Monday when students suddenly burst into the gym screaming and crying, yelling, “There’s a shooter, there’s a shooter.”

“All of a sudden, we got into a state of panic, because we didn’t know what was going on,” Espinoza said.

She — along with several other students interviewed by this news organization — said that her classes were mostly empty Tuesday, prompting questions from some students about whether school should have been held so soon after the shooting. Several students said that only five to 10 students out of the typical 20 to 25 showed up for class.

Anthony Coleman, 64, said his daughter initially asked to stay home from school Tuesday. She was in the same area of the school when the gunfire erupted — leaving her rattled and uncertain about heading back to class so soon. Eventually, though, he coaxed her out of the house and to the school.

“I said, ‘No, you can’t hide from this,’” Coleman said. Still, he lamented that the national epidemic of gun violence finally made its way inside the inside the school that that he attended as a child, and that three of his kids now attend as well.

“I’m not surprised by it,” Coleman said. “Thank God that it was just an isolated incident. And that it was just one child, and that he’s still breathing. But this is the world we live in. Gun violence is increasing.”

A message sent by this news outlet to the Oakland Unified School District were not returned Tuesday. OUSD spokesperson John Sasaki previously said in a statement that district behavioral health and safety staff would be on hand Tuesday to support students and parents on site. The statement added that the ongoing police investigation means “the school and the District’s ability to answer questions will be limited or prohibited. It is also unlikely that we will be able to clarify or correct rumors while the investigation is still underway.”

Espinoza also lamented that gunfire is such a common occurrence in this part of Oakland. It’s an area that routinely reports the lion’s share of homicides, along with activations of the police department’s Shot Spotter system, which can electronically detect gunfire.

“This is East Oakland and we hear gunshots almost every day,” Espinoza said. “It’s been going on so much in the community, it’s becoming normalized. It should never have come to this point.”