Have Heat made a comparative case for winning from within? – The Mercury News 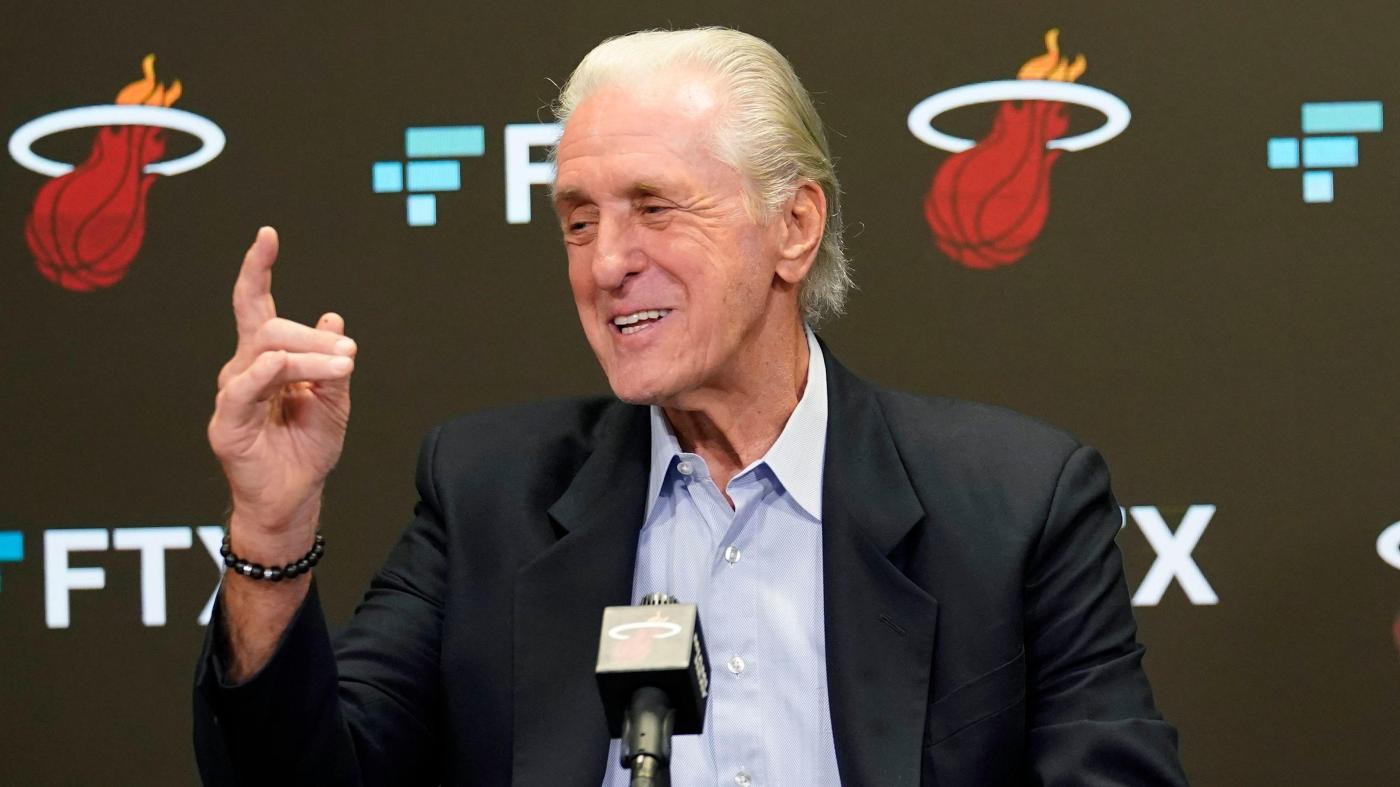 Just over two weeks from the start of training camp, the reality is that there likely will be nothing shiny and new for the Miami Heat. Instead, 13 players return from the roster that closed within one game of the NBA Finals.

Name tags will not be necessary.

Yet judging from some of the outside perception, it’s as if what Pat Riley has crafted has grown stale.

For the Heat, that likely will create a camp narrative of new not necessarily being better.

While many of the contenders in the decidedly deeper Eastern Conference reshuffled, the Heat instead looked within with their limited salary resources. So Victor Oladipo and Dewayne Dedmon were retained via Bird Rights, with Caleb Martin re-signed with the lower-tier mid-level exception that kept the Heat from being hard-capped.

And yet, would the reaction to the offseason be so meh if it instead was cast thusly: a former All-Star was signed, one who has worked his way back from injury to the degree that this could be his first full season since an All-NBA season; a reliable veteran backup center was signed to add bulk behind Bam Adebayo; and one of the NBA’s most improved players was signed to compete for the starting role at power forward?

As in Oladipo, Dedmon and Martin.

Sure there is something to be said for fresh blood, but in each of the previous two odd-number calendar years, the Heat have added Jimmy Butler and Kyle Lowry, two of the biggest free-agency additions of those offseasons.

For their part, the Heat have privately expressed confidence in a remix limited to the additions of first-round pick Nikola Jovic and two-way player Darius Days. And, assuredly, more confidence would have been expressed if there was a deal there to be made for Kevin Durant or Donovan Mitchell.

Still, it is important to consider the East’s reshuffle from a position of all players signed this offseason, including those retained from within.

Cleveland Cavaliers: When you add a player the pedigree of Mitchell, it is difficult to deny the reality of a significant upgrade. But it remains how much of a step can be taken from 44-38 and a loss in the play-in round. It’s not as if supplementary additions of Ricky Rubio, Robin Lopez and Raul Neto will put them over the top.

Atlanta Hawks: In many ways, the addition of Dejounte Murray is similar to Cleveland’s addition of Mitchell, a move that takes a 43-39 team to a higher level. But how high? Yes, Justin Holiday and Aaron Holiday could help, but otherwise the signings are the level of Moe Harkless and Frank Kaminsky (keeping in mind, too, that Kevin Huerter, Delon Wright and Danilo Gallinari were lost).

Philadelphia 76ers: Arguably this is the quintessential case of focusing on supporting pieces, with the additions of P.J. Tucker, De’Anthony Melton, Danuel House and Montrezl Harrell. But it still comes down to the health of Joel Embiid and playoff reliability of James Harden. Like the Heat, the 76ers went for supporting pieces, just taking an external approach with the process (including swiping Tucker).

Boston Celtics: Malcolm Brogdon is the linchpin of the makeover, especially with Gallinari now sidelined for the season. But is it more than a subtle gain, considering how much is structured around Jayson Tatum, Jaylen Brown, Marcus Smart, and, now, even Robert Williams?

Toronto Raptors: The move here was the addition of Otto Porter in free agency, which in fact was their only move beyond the minimum scale. Like the Heat, the Raptors opted for a run-it-back mode (or at least settled for it, when they, too, were unable to land Durant or Mitchell).

Brooklyn Nets: Another team with a summer of subtlety when it came to signings or additions, with Royce O’Neale the lone bigger-ticket item, and with T.J. Warren, Markieff Morris, Edmond Sumner and Yuta Watanbe rounding out the remake. It still will come down to Durant and Kyrie Irving, just as it will come down to Butler, Lowry and Bam Adebayo for the Heat.

Milwaukee Bucks: Joe Ingles, if healthy, certainly could help, but it is a Royce O’Neale-level move, for another team comfortable in running it back with the incumbent core.

The others: For the Washington Wizards, Charlotte Hornets, Detroit Pistons, Indiana Pacers and Orlando Magic, it never was about a transformative summer or even living in the moment.

CARRY ON: Ahead of Saturday’s induction speech at the Basketball Hall of Fame, former Heat guard Tim Hardaway was asked of not only bringing his crossover-dribble mastery to the NBA, but also doing it during an era when referees were more prone to calling palming and carrying violations. “Great question,” Hardaway said with a laugh during his media session. “When I was playing in the streets of Chicago, the old-heads, if you put your hand up under the ball, they was like, ‘Nah, nah. We’re going the other way with that.’ And I’m like, ‘Nah, what you talkin’ about?’ They said, ‘No, that’s a carry, that’s a carry.’ So I learned back then how to dribble the ball correctly.” He added, “At times I think they should call some stuff, and tell them, and recognize to them that they are carrying the ball. But it is what it is.”

NO GUARANTEES: While Markieff Morris moved on from last season’s brief Heat tenure for a free-agent deal with the Brooklyn Nets, it essentially is a make-good deal. None of the salary in the one-year, $2.9 million veteran-minimum contract is guaranteed at the moment. The first $500,000 of that amount will become guaranteed if he is not waived by opening night, with an increase to a $1 million guarantee if he is on the roster Dec. 1. All contracts become fully guaranteed for the season on Jan. 10. This is the third consecutive season Morris will play on a minimum deal, after similar contracts in 2021-22 with the Heat, and 2020-21 with the Lakers. Working in Morris’ favor is a relationship with Nets coach Steve Nash that dates to Morris’ rookie season with the Phoenix Suns, which was also Nash’s final season there as a player. New Nets assistant coach Igor Kokoškov was on the Suns’ staff that season.

PLAN B: There likely will be an opening-night reunion of impact for the Heat, when Goran Dragic arrives as a member of the Chicago Bulls. Among the reasons Dragic opted for the Bulls, instead of a reunion with Slovenia national teammate Luka Doncic with the Dallas Mavericks, was assurances of playing time. Now the reasoning for those assurances have become clearer, with the Bulls acknowledging that Lonzo Ball will not be available for camp due to January’s knee surgery and likely will be out for the start of the regular season. The Heat and Bulls open their seasons Oct. 19 at FTX Arena. Beyond Dragic, the Bulls’ other options at point guard in the absence of Ball are Alex Caruso and Ayo Dosunmu, who stepped in for Ball last season.

HERE’S WHY: While the Heat have remained idle amid their uncertainty at power forward, the Philadelphia 76ers certainly have been proactive amid their power shortage, not only signing P.J. Tucker away from the Heat, but not also adding Montrezl Harrell. In many ways, the urgency was created from their second-round loss to the Heat. In that series, the 76ers were outscored by 31 points in the 31 minutes played by since-discarded backup big man DeAndre Jordan in the first two games as a fill-in starter for Joel Embiid. Harrell, as much as anything, figures to be a regular-season minutes eater, as a means of creating rest for Tucker and Embiid. Remaining to be seen if a player with Harrell’s limited offseason and switchability limitations can work in today’s playoff basketball.