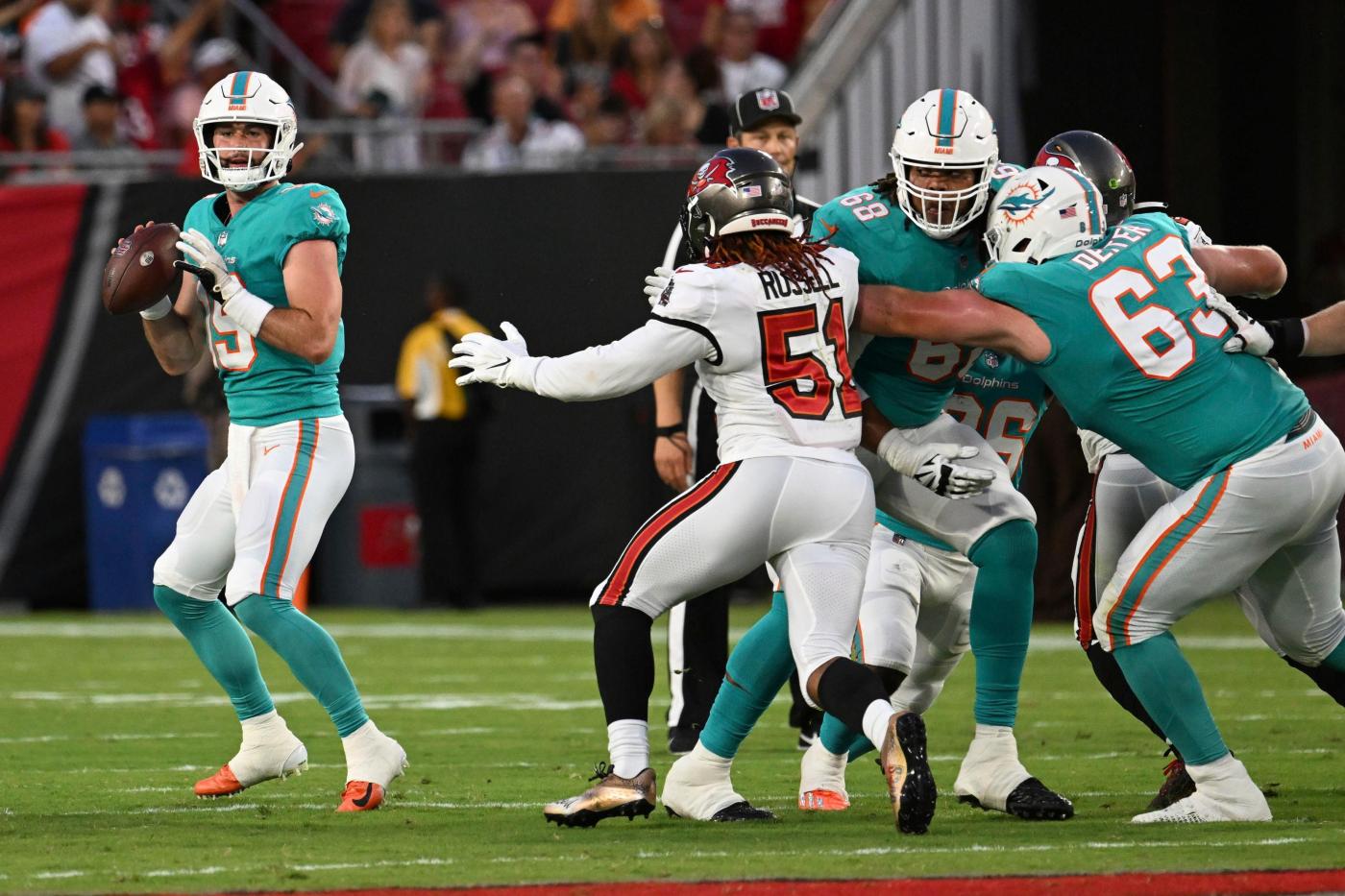 Most of the top players for both teams were sitting out the preseason opener between the Miami Dolphins and Tampa Bay Buccaneers, which allowed lower-on-the-depth-chart players an opportunity on Saturday night at Raymond James Stadium.

Quarterback Skylar Thompson, the rookie seventh-round pick who got the start with Tua Tagovailoa among 20-plus Dolphins resting, went 10 for 12 for 122 yards and a touchdown in the first half.

His touchdown lifted Miami from a mostly lackluster first half, hitting Lynn Bowden open in the end zone on a double move for the 22-yard score. It came on the following play after cornerback Elijah Campbell intercepted a short pass to the flat, ripping the ball away from a receiver.

Linebacker Sam Eguaoven, who was having a rough night with missed tackles to this point, then scored a defensive touchdown on a 33-yard fumble return. Outside linebacker Darius Hodge hit quarterback Kyle Trask’s arm before it went forward on a pass to force the fumble.

While tight end Mike Gesicki, playing 2022 on the franchise tag, has seldom seen targets in training camp practices under new coach Mike McDaniel’s offense, Gesicki got the Dolphins’ first offensive play to come his way, a short pitch and catch with room to run for 13 yards.

The Buccaneers scored a first-quarter touchdown from quarterback Blaine Gabbert to receiver Jaelon Darden where it appeared strong safety Brandon Jones was not in the right spot in zone coverage as Darden ended up open between Noah Igbinoghene and Nik Needham, the cornerback who was playing free safety over the top.

Tampa Bay, with former Florida quarterback Trask replacing Gabbert to start the second quarter, went for a 15-play, 86-yard drive to follow where backup Dolphins defenders had multiple missed tackles, including a noticeable one from Eguavoen.

With free agent offensive line additions Terron Armstead and Connor Williams out, Larnel Coleman started at left tackle and Michael Deiter at center. Deiter had only returned to practice on Wednesday from a foot injury. He didn’t have any poor snaps, which have been a problem for Williams in practice.

Coleman gave up the third-down sack of Thompson on Miami’s opening drive that forced the Dolphins to settle for a 33-yard field goal after Thompson started 4 of 4 for 31 yards on the opening series. On a third down for an ensuing series, the Buccaneers ran a stunt in front of Deiter and right guard Robert Hunt, which got Thompson hit on the incomplete pass.

The Dolphins had another drive stall deep into the first half where right tackle Kion Smith, replacing Austin Jackson at this point, allowed a sack, causing Miami to settle for a 52-yard Jason Sanders field goal.

With several starters out, Miami trotted out a defensive unit to start that involved defensive linemen Raekwon Davis, John Jenkins and Porter Gustin, outside linebackers Jaelan Phillips and Andrew Van Ginkel, inside linebackers Eguavoen and Duke Riley, cornerbacks Igbinoghene and Keion Crossen and safeties Jones and Nik Needham, who would be the team’s nickel when Xavien Howard and Byron Jones are available at cornerback and Jevon Holland is in at free safety. Crossen had a physical pass breakup on a deep 1-on-1 opportunity.

Preston Williams took in the Dolphins’ first punt return, and Bowden was back deep on the initial kick return, a touchback. Cornerback Trill Williams has curiously not been seen on defense, although he is dressed and standing on the sideline.

The Dolphins lead the Buccaneers, 20-14, at halftime of the exhibition.