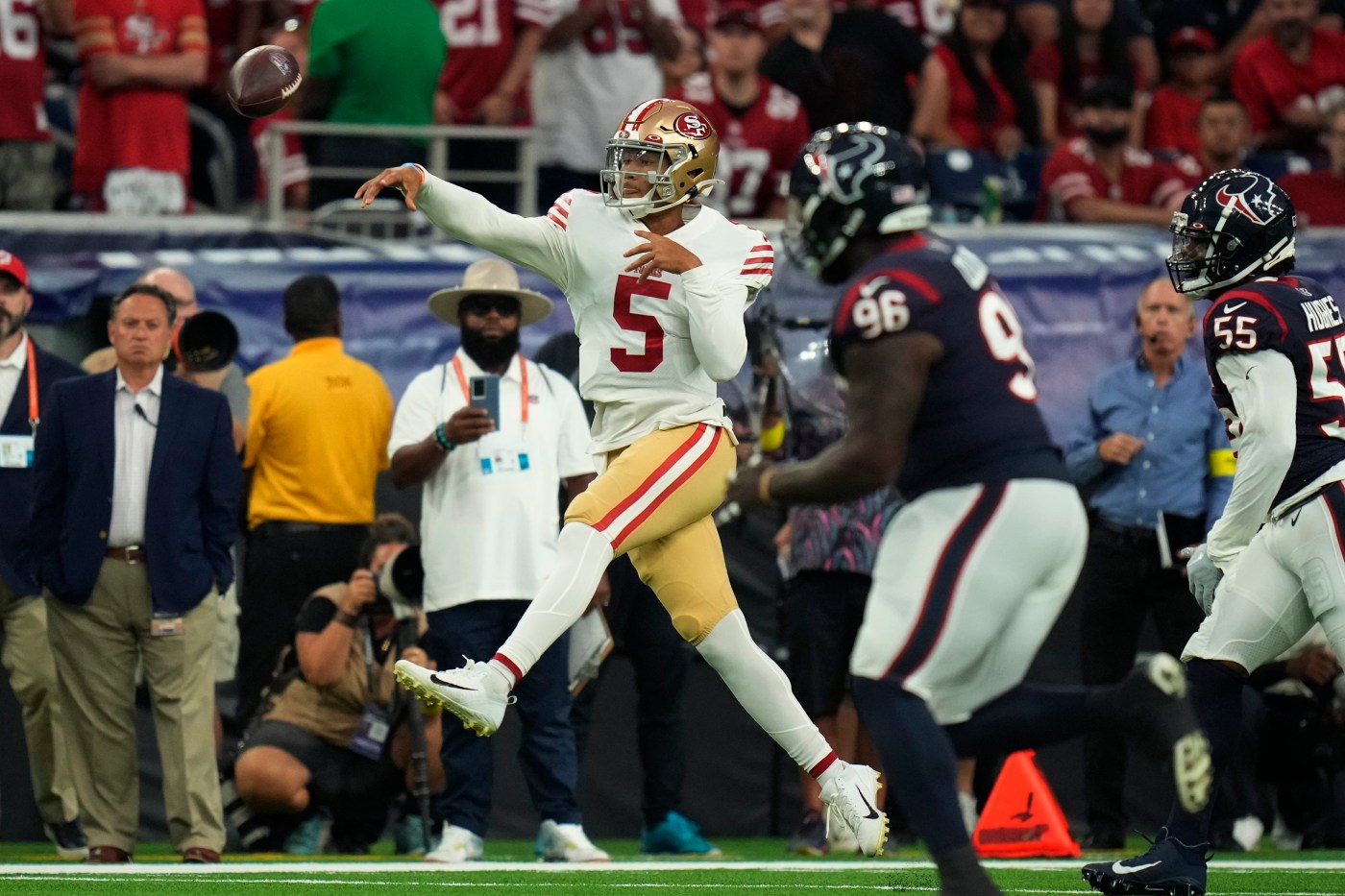 Ready or not, here he comes.

The training wheels will come off 49ers quarterback Trey Lance following his most extensive play of the preseason in a 49ers’ road game against the Houston Texans.

Lance didn’t produce any points, nor did he make any egregious errors. He played into the second quarter, playing 22 snaps, with the 49ers producing two punts and getting stopped on downs in Houston territory. That he nearly tripped on his first handoff was noted by Amazon Prime analyst Ryan Fitzpatrick.

“He hasn’t played a lot of football,” Fitzpatrick said at halftime. “He trips up over the tailback. Things are going really fast in his head right now. That’s telling me he’s a little bit nervous.”

Coach Kyle Shanahan has 17 days to plan for a specific opponent with a game plan which will play to Lance’s strengths when the 49ers visit the Chicago Bears on Sept. 11.

Lance completed 7 of 11 passes for 49 yards and ran for one yard on one carry on a passing play in which he broke out of the pocket. The 49ers trailed 7-0 when he departed in favor of backup Nate Sudfeld.

Shanahan called 11 plays with Lance under center and 11 in the shotgun with a 50-50 run-pass balance while Lance was in the game — roughly what you can expect as the 49ers can be expected to rely on defense and their running game while the 22-year-old quarterback gets accustomed to the NFL.

A look at each of Lance’s three series:

The 49ers drove 25 yards in five plays before punting the ball away. Lance’s first completion was his longest one, a 15-yard screen the right to fullback Kyle Juszczyk for a first down to the Houston 36. A play-fake with a roll right and a pass to Brandon Aiyuk was not close, although Lance was chased out of the pocket.

On third-and-2 at the 44-yard line, Shanahan dialed up a deep attempt to Deebo Samuel along the right sideline. Lance’s throw was on target, but Steve Nelson played it tight and broke up the pass, forcing a 49ers punt.

Lance was sacked for a 7-yard loss on first down from the 23-yard line by rookie Kyle Hinish, then was off target on second down to the right to tight end George Kittle. The 49ers got a break on third-and-17  when Nelson was called for illegal contact against Samuel, giving the 49ers five yards and a first down.

The drive ended when Lance twice threw short, going for a single yard to Jauan Jennings in second-and-4 from the 28 and then throwing short of the stake on third to Jeff Wilson for two yards, bringing up a second punt.

The 49ers had the ball for 11 plays, but gained just 29 yards. The most substanital gain was a second-and-4 throw over the middle to Malik Turner. The ball was underthrown, but Turner sunk to the turf and made a catch for a first down.

“That ball has to be on his facemask,” Fitzpatrick said.

On a second-and-8 play at the Houston 41, Lance rolled to his right and didn’t feel the rush from Jerry Hughes, who had beaten Jalen Moore. Hughes hit Lance’s right arm as he was throwing, with the ball falling incomplete, but the quarterback was unhurt.

The drive ended when Trey Sermon was dumped for a 3-yard loss on a fourth-and-1 play and Lance was done for the night.

The final tally for Lance in two preseason games against Green Bay and Houston?

Five possessions, 166 yards on 34 plays, one touchdown drive, one field goal drive (both against the Packers).

“I don’t take too much out of the first half,” Sherman said. “He’s nervous. He’s getting his reps. He’ll be fine.”