How the U.S. let 20 million doses of monkeypox vaccine expire – The Mercury News 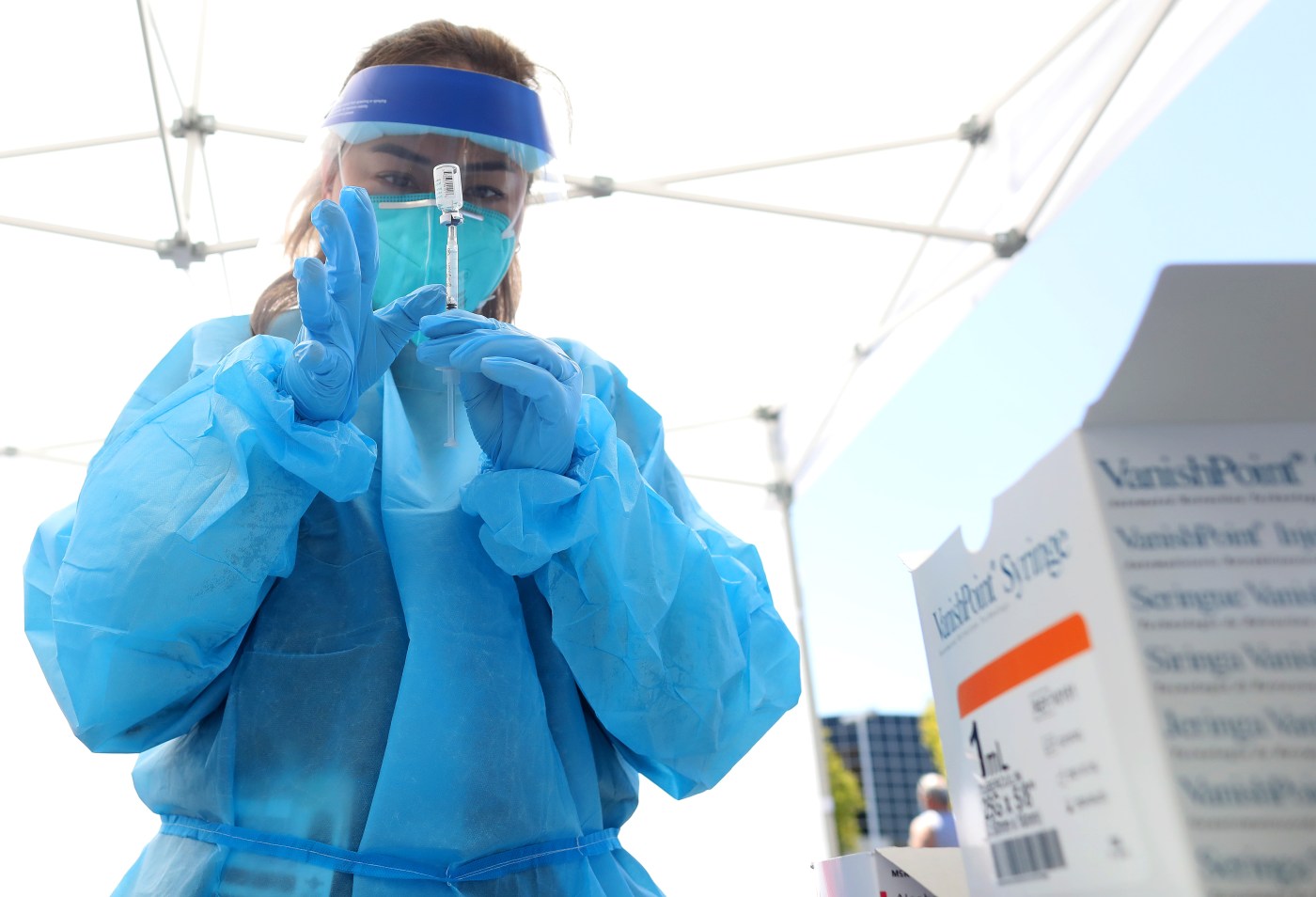 Less than a decade ago, the United States had some 20 million doses of a new smallpox vaccine — also effective against monkeypox — sitting in freezers in a national stockpile.

Such vast quantities of the vaccine, known today as Jynneos, could have slowed the spread of monkeypox after it first emerged in the United States more than two months ago. Instead, the supply, known as the Strategic National Stockpile, had only some 2,400 usable doses left in it in mid-May, enough to fully vaccinate just 1,200 people.

The rest of the doses had expired.

Now, some 10 weeks into the outbreak, people at high risk who want to get vaccinated have been unable to find a dose and may not be able to find one for months.

The chain of events that led the stockpile of a now-critical vaccine to dwindle to near nothing in the United States is only now emerging.

At several points federal officials chose not to quickly replenish doses as they expired, instead pouring money into developing a freeze-dried version of the vaccine that would have substantially increased its three-year shelf life.

As the wait for a freeze-dried vaccine to be approved by the Food and Drug Administration dragged on over the last decade, the United States purchased vast quantities of raw vaccine product, which has yet to be filled into vials.

The unfinished vaccines remain stored in large plastic bags outside Copenhagen, Denmark, at the headquarters of the small Danish biotech company Bavarian Nordic, which developed Jynneos and remains its sole producer.

For nearly 20 years, the U.S. government has helped fund the company’s development of the vaccine, clinical trials and manufacturing process, at a cost that passed the $1 billion mark by 2014 and is hurtling toward $2 billion. Despite this, the United States now finds itself unable to procure enough doses to quickly launch a widespread vaccination campaign for those at highest risk: men who have sex with men, and in particular, those who have multiple partners.

One reason for the reduction in the U.S. stockpile of Jynneos is that the federal officials overseeing it had not viewed monkeypox, which has a relatively low fatality rate, as much of a problem, or at least as their problem. They were focused on the most dangerous and deadly scenarios, such as a bioterror attack involving smallpox or anthrax.

“We have to prepare against multiple threats with a limited budget,” said Dr. Gary Disbrow, director of Biomedical Advanced Research and Development Authority, or BARDA, the federal agency that supported the development of Jynneos and other drugs and vaccines to protect against pandemics, bioterrorism and other hazards. “Our planning was for smallpox.”

Now, monkeypox has emerged as a serious public health threat. As of the end of July, more than 5,000 cases were reported in the United States, and there were nearly 1,300 in New York City.

“We were required to have vaccines for smallpox, based on a material threat determination that simply didn’t exist for monkeypox, specifically,” said a Health and Human Services spokesperson in a statement. “Today, now that we’re in response mode of facing a public health threat, we’re working swiftly around the clock to accelerate the number of doses available.”

The limited supply of Jynneos available shows that a new approach to preparing for biological threats and pandemics is needed, said a former federal official, Dr. Ali S. Khan, who until 2014 ran the Centers for Disease Control and Prevention office that managed the stockpile. “I want people to know how poorly this went given the amount of money and resources put into it,” he said.

9/11 and Fears of a Bioterrorism Attack

Following the Sept. 11, 2001, terrorist attacks and the subsequent anthrax letter attacks, the U.S. government redoubled its efforts to prepare against future threats. One clear danger was smallpox, with a 30% fatality rate. Though the virus was declared eradicated in 1980, lab samples of it existed, and there had long been concern that a foreign country or terrorist group might weaponize it.

In the years since Sept. 11, the United States stockpiled well over 100 million doses of smallpox vaccines — versions of the vaccine that eradicated the virus. With names like Dryvax and ACAM2000, they use a live virus that replicates and can have dangerous side effects, including inflammation of the heart in about six recipients out of 1,000. One or two people of every million vaccinated are expected to die.

Following 2001, the United States sought an effective smallpox vaccine with fewer side effects. In 2003, it began pumping millions of dollars into Bavarian Nordic, a small company with a promising new smallpox vaccine.

The vaccine came in vials in liquid-frozen form, with a three-year shelf life at the temperature the U.S. government stored them: minus 20 degrees Celsius, slightly colder than a kitchen freezer.

The new vaccine, which back then went by the name Imvamune, not Jynneos, was never intended to replace the far larger stockpile of older generations of smallpox vaccines, but to be offered to those at higher risk of complications from the older vaccines and their family members, according to a 2014 report by the U.S. Department of Health and Human Services. That included people with conditions ranging from eczema to HIV, and pregnant women and infants.

Some federal health officials were skeptical. Jynneos required two shots — not ideal in the event of a bioterror attack — rather than one. And though traditional smallpox vaccines can have serious complications, that would be less of a concern if the country were to face a smallpox outbreak.

But Bavarian Nordic executives told shareholders that the long-term U.S. plan was to stockpile enough of the Jynneos vaccine to vaccinate all 66 million eligible people in high-risk households.

In 2009, the company received a $95 million contract from the United States to begin developing a freeze-dried formulation with a shelf life of five to 10 years.

As the 20 million Jynneos doses began to expire, the United States ordered another 8 million, which were shipped to the nation’s stockpile in 2015, according to Bavarian Nordic and the U.S. Health and Human Services personnel. That order was to be “a bridge” until the freeze-dried version emerged, according to a federal planning body of mainly Health and Human Services personnel.

Khan remembered “the frustration on why it was taking so long to get a freeze-dried preparation that could be held for longer.”

But the 8 million doses were the last substantial shipment for years. From 2015 onward, the United States instead placed orders for hundreds of millions of dollars of bulk vaccine product — basically raw vaccine stored in large bags, which would be converted to freeze-dried doses once the company perfected the process and had the necessary FDA approval.

By 2017, all 27,993,370 doses in the national Jynneos stockpile had expired, although the United States still had a huge stockpile of its other smallpox vaccines.

“In fairness, I’m not sure anybody in their right mind would have thought we needed more smallpox vaccine,” said Dr. Nicole Lurie, who oversaw the stockpile during her eight-year tenure as assistant secretary for preparedness and response within Health and Human Services under President Barack Obama.

Both Jynneos and the older stockpiled smallpox vaccines, such as ACAM2000, are good choices as a smallpox vaccine. Federal officials expect ACAM2000 to protect against monkeypox and have shipped doses to local health authorities for use, but its harsher side effects make many doctors uncomfortable with using it for a mass monkeypox vaccination campaign.

One Delay After Another

The goal of producing freeze-dried vaccine has taken longer than expected, partly because of a slow FDA review process. In recent years Bavarian Nordic also undertook an expansion that would ultimately delay delivery of vaccine doses.

Bavarian Nordic had long relied on outside companies for the final stages of the production process, such as filling the actual vials. That is common, so much so that HHS has invested in “fill and finish” companies to reduce the risk of a bottleneck during a pandemic.

By 2017, the company had plans for building its own “fill-finish” facility, which would make its vaccine production “more profitable than what we’ve seen in the past,” according to Bavarian Nordic’s CEO, Paul Chaplin, with the U.S. government funding a portion of this expansion.

In early 2020, the United States placed an order for 1.4 million liquid-frozen doses from Bavarian Nordic, its first significant order for ready-to-use product in years. Some of those doses — about 372,000 — were filled by a third party contractor, and have been the main source of doses for the country’s monkeypox vaccination program so far.

The rest were filled at Bavarian Nordic’s new fill-finish facility, which was up and running in 2021.

But the FDA had not inspected the facility by the time the monkeypox outbreak began and regarded those doses as unusable until the inspection had occurred. As a result, the bulk of the 1.4 million-dose order sat in Denmark until last month, when FDA inspectors arrived.

Now, the U.S. government has asked Bavarian Nordic to begin sending as many doses as quickly as possible, setting aside the goal of a freeze-dried formulation for the time being.

But it may be months before the company is able to deliver millions of more doses from the bulk vaccine supply that the United States has been paying Bavarian Nordic for years to store, U.S. officials say.

With far too little Jynneos on hand to contain the monkeypox outbreak, federal officials are taking a fresh look at the expired doses, which it still has on hand. Health and Human Services officials have sent samples back to Bavarian Nordic for testing.

It is “very unlikely” they are still viable, officials say. But if they are, the Administration for Strategic Response and Preparedness, a division within HHS, said it would make them “available for the response.”

This article originally appeared in The New York Times.