How to fix a broken country? 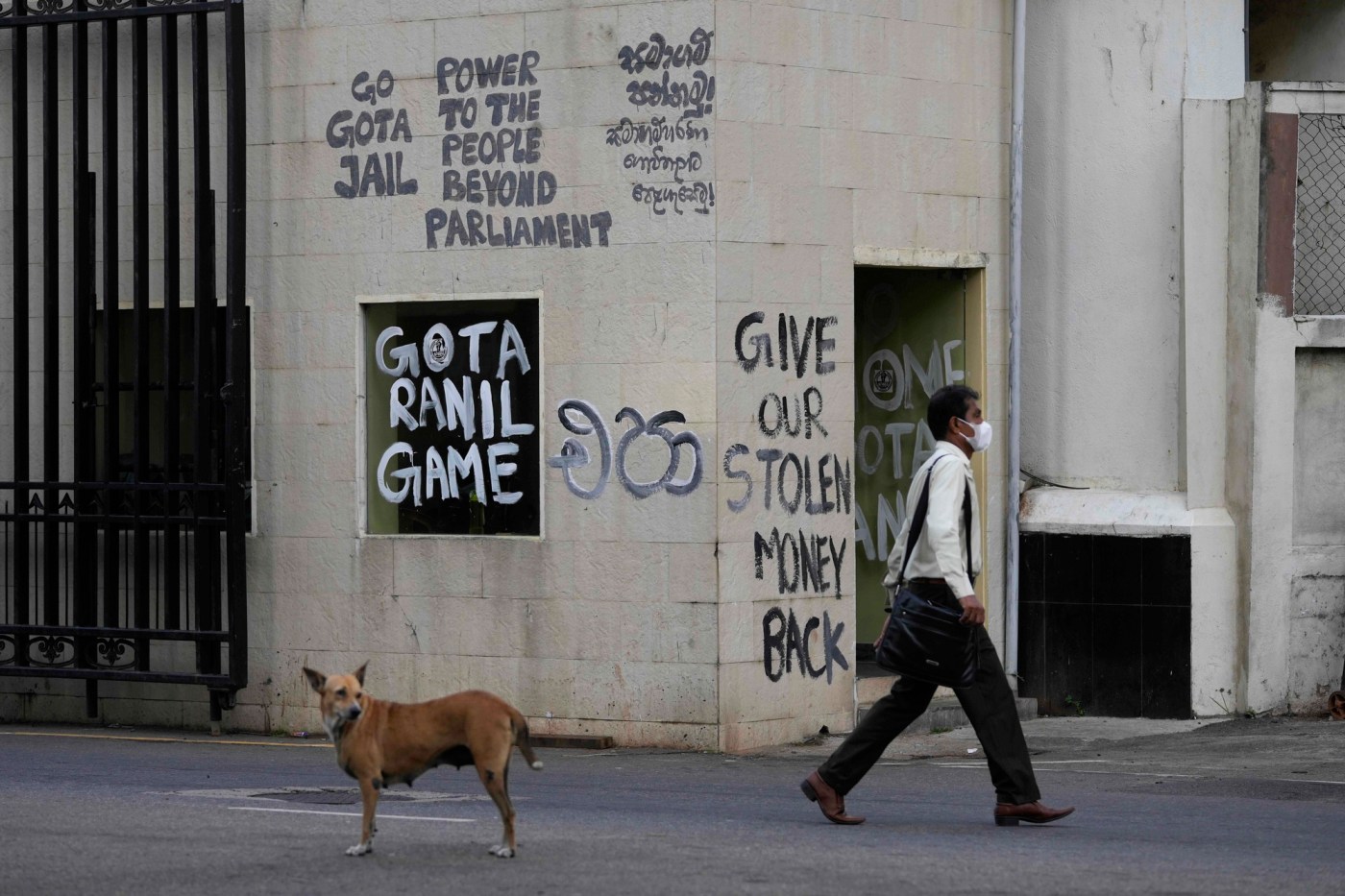 For years it had been one of Sri Lanka’s grandest and most heavily guarded buildings, serving as the official residence and state office of the President.

But all that changed on July 9, when protesters stormed in and took control, demanding the resignation of President Gotabaya Rajapaksa before turning the palace upside down.

“That was the home of the most powerful man in the country,” said Sri Lankan author and analyst Asanga Abeyagoonasekera. “It had never been opened to the public.”

It’s now become a novelty attraction — all traces of its exclusivity and prestige gone. Each day for the past five days, thousands have lined-up up for hours just for a glimpse of Rajapaksa’s luxurious lifestyle. The neatly manicured lawns have become picnic spots and protesters swim and party in his private pool.

He has since moved on to Singapore, arriving on a “private visit” confirmed by the authorities. On Friday, Sri Lanka’s parliamentary speaker accepted Rajapaksa’s resignation, bringing an end to his nearly three years in office.

“Resignation was really the only option he had,” Abeyagoonasekera said. “People are tired, hungry and angry … And they are demanding change and accountability because they are sick of seeing the same faces in charge.”

‘We can’t afford to pick or choose’

Rajapaksa may be gone, but Sri Lanka is still struggling with a ruinous financial crisis, and experts said things are likely to get worse before they get better.

Protests over daily power cuts, rising fuel prices and severe shortages of basics like food and medicines kicked off in March and showed few signs of abating.

“There is zero political stability,” said Abeyagoonasekera. “We’ve seen three cabinets in two months, with a fourth coming up. Urgent change is needed to restore the country.”

Despite a raft of government-implemented crisis control measures, the situation remains desperate for millions across the country. “We are still short on food, medicine and fuel,” said Colombo-based political analyst Amita Arudpragasam. “Policies have also been inefficient and confusing.”

Analysts said the crisis started around 2019. But for many Sri Lankans, the warning signs were apparent even back in 2010, when Gotabaya Rajapaksa’s brother Mahinda was re-elected President for a second term.

“It was a ticking time bomb,” Arudpragasam said of the Rajapksa era. “The government was giving huge cuts to the wealthy elite as well as corporations when they should have been increasing taxes. Money that could have been reinvested in the population was used to repay debt obligations — and none of this helped to address the many weaknesses in our economy.”

Gotabaya Rajapaksa took power in late 2019, having previously only held the unelected post of defense secretary in his brother’s administration.

“Rajapaksa didn’t heed anyone’s advice and was supported by people who did not understand how an economy likes ours needed to work” said Arudpragasam. “(The government) refused to admit that the economy was in crisis until it was too late.”

Urgent humanitarian assistance is now needed, she said. “We are in a crisis situation where we can’t afford to pick or choose.”

In 2020, the World Bank reclassified Sri Lanka as a lower middle income country amid currency collapses and rising inflation rates.

Earlier this month, Prime Minister Wickremesinghe declared the country “bankrupt.” “Our economy has faced a complete collapse,” he said.

‘One of the best places in the world’

The crisis has shocked many in the international community, who recall a different Sri Lanka.

“In many ways, Sri Lanka is a development success story,” said Philippe Le Houérou, formerly the South Asia vice president of the World Bank. “It stands out as a lower middle-income country in a region that hosts the world’s greatest concentration of poor.”

Following the end of Sri Lanka’s bloody civil war in 2009, the country entered a period of peace and stability. Trade flourished and international tourists returned to the country’s beaches, resorts and tea plantations.

Le Houérou highlighted Sri Lanka’s “impressive” post-war social achievements. “Economic growth has been robust and prosperity has been spread widely,” he said, adding that life expectancy was also among the highest in the region.

The World Economic Forum (WEF) once called Sri Lanka South Asia’s richest economy. “The island reaps the benefits of early investments in higher education and training … and needs to concentrate on areas that are most important to trigger the efficiencies that will drive further growth,” WEF said in a 2016 report.

Experts said that tourism, one of Sri Lanka’s most lucrative industries, never had the chance to recover after the 2019 Easter terror attacks followed by the pandemic, which hit the year after.

“We had a strong agriculture base and one of the most exciting tourism industries in the world,” said Abeyagoonasekera, the author. “With the absence of proper governance, we moved from being a fragile state to a crisis state and now a failed one.”

But, he added: “Sri Lanka was one of the best places in the world to be and I believe with the right directives and functioning institutions, it can become that place again.”

All eyes are on a bailout plan with the International Monetary Fund (IMF), which has been “closely monitoring” developments in the country since talks ended in June without a deal. Government mismanagement has also further complicated recovery, analysts said.

“The IMF isn’t going to grant us financial support without political stability, not when the country is still on knife’s edge,” said research fellow Sanjana Hattotuwa. He added that while protesters had achieved early goals of getting Rajapaksa to resign, the country now faced a great deal of uncertainty. “There is no easy fix for a broken economy,” he said. “But the first step would be a new government and elections are needed.”

‘It is time for change’

With Gotabaya Rajapaksa now out of the country, public fury has turned to Prime Minister Wickremesinghe, current Acting President.

“He is politically connected to the Rajapaksas and his interest (has always been) in protecting them.”

Others reiterated the call for elections. “The protest movement isn’t slowing down and many Sri Lankans have realized the importance of their roles as citizens in holding those in power accountable,” said Ambika Satkunanathan, a human rights lawyer who once served with the United Nations and the Human Rights Commission in Sri Lanka.

She also said she wouldn’t rule out the Rajapaksas returning to power. “They might have abandoned ship while it was sinking but they are savvy and have been in the political game for decades,” she said.

“But there is a window now and it is time for change. The government needs to call elections sooner rather than later.”

Wickmenesinghe will remain Acting President until Parliament elects a new President, with lawmakers summoned to meet on Saturday to start the process. No date has been set yet for the vote, but under the constitution Wickremesinghe will only be allowed to hold the office for a maximum of 30 days.

Once elected, the new President will serve the remaining two years initially allocated for Rajapaksa’s term.

Parliamentary elections were last held in 2020 and the Presidential election in 2019 — months after the Easter church bombings took place. Gotabaya Rajapaksa won after a closely fought race against then-ruling party candidate Sajith Premadasa.

Wickremesinghe’s appointment on Wednesday did not go down well with protesters who stormed his office demanding he step down. Police fired tear gas and water cannons at protesters and a nationwide state of emergency was declared.

On Friday, Sri Lanka’s ruling party confirmed that Wickremesinghe is its nominee for President in the upcoming election.

But Sri Lankans remain determined, analysts said, and want to see new people and faces in government. “The interim President will be (the one) tasked to stabilize the economy for a few months,” said Abeyagoonasekera. “But he wouldn’t be a leader elected by the people and that is an obstacle.”

The Rajapaksas drew much of their power from the “war hero” status afforded them by the majority population, following then-president Mahinda’s 2009 declaration of victory in the 26-year civil war against the Liberation Tigers of Tamil Eelam rebels — a campaign overseen by then-defense secretary Gotabaya.

According to a 2011 United Nations report, Sri Lankan government troops were responsible for abuses including the intentional shelling of civilians, summary executions, rape, and blocking food and medicine from reaching affected communities. The UN report said “a number of credible sources have estimated there could have been as many as 40,000 civilian deaths.”

The Rajapaksas have always vehemently denied such allegations.

“Because we simply can’t afford to slip back yet again into a crisis like the one we face today,” she said.

“There should be investigations into alleged corruption which has contributed to this crisis, including any efforts to hide assets abroad,” she said. “Foreign governments should investigate assets and freeze them if appropriate.”

“The urgent priority is for a peaceful transition of power that respects rights and addresses the root causes of the political and economic crisis which is ultimately about a lack of accountability, corruption and the weakening of institutions that were meant to provide a check on power,” she said.

“If a more stable government … cannot be established, the risks are of a humanitarian crisis as well as greater violence and repression.”